Considering liquors can be some of the most complimentary libations to a good tobacco blend, it’s no wonder that liquor flavored tobaccos are so popular with aromatic lovers and can even be the exception for those picky about their flavored blends. The addition of different liquor flavorings can bring remarkable textures and nuances to the profile of a blend one might not expect.

Often, it’s these aromatics that depart from the saccharin acuteness which turns many smokers with a taste for darker, bolder blends off from aromatics. To be fair, most tobacco blends are cased, subtly altering the flavor of the tobacco. But this is more to attenuate some of the heavier qualities of raw tobacco and balance a blend. Aromatics have a top flavoring (sometimes more than one) which usually centers or plays a much more forward role in the mix. With most aromatics, the flavor is applied as a spray on the cased tobacco, but we also get a number of fantastic barrel-aged liquor blends—those that are sealed in a cask that liquor was once aged in. Those spirits haunt the old vessel, their character pervasive through the wooden staves, which will impart the inherited flavors onto the tobacco for a natural aromatic essence.

Of course, there are a lot of options to consider for the pipe smoker curious to try a few liquor blends. From brands, to flavors, and the tobaccos which abut them, it’s hard to know exactly where to begin. That’s why we’ve put together this list of 9 of the best liquor blends and why we think they’re sure to delight any spirited aromatic smoker. Hopefully you can apply your own preferences and find a few blends that are just what you’re looking for. 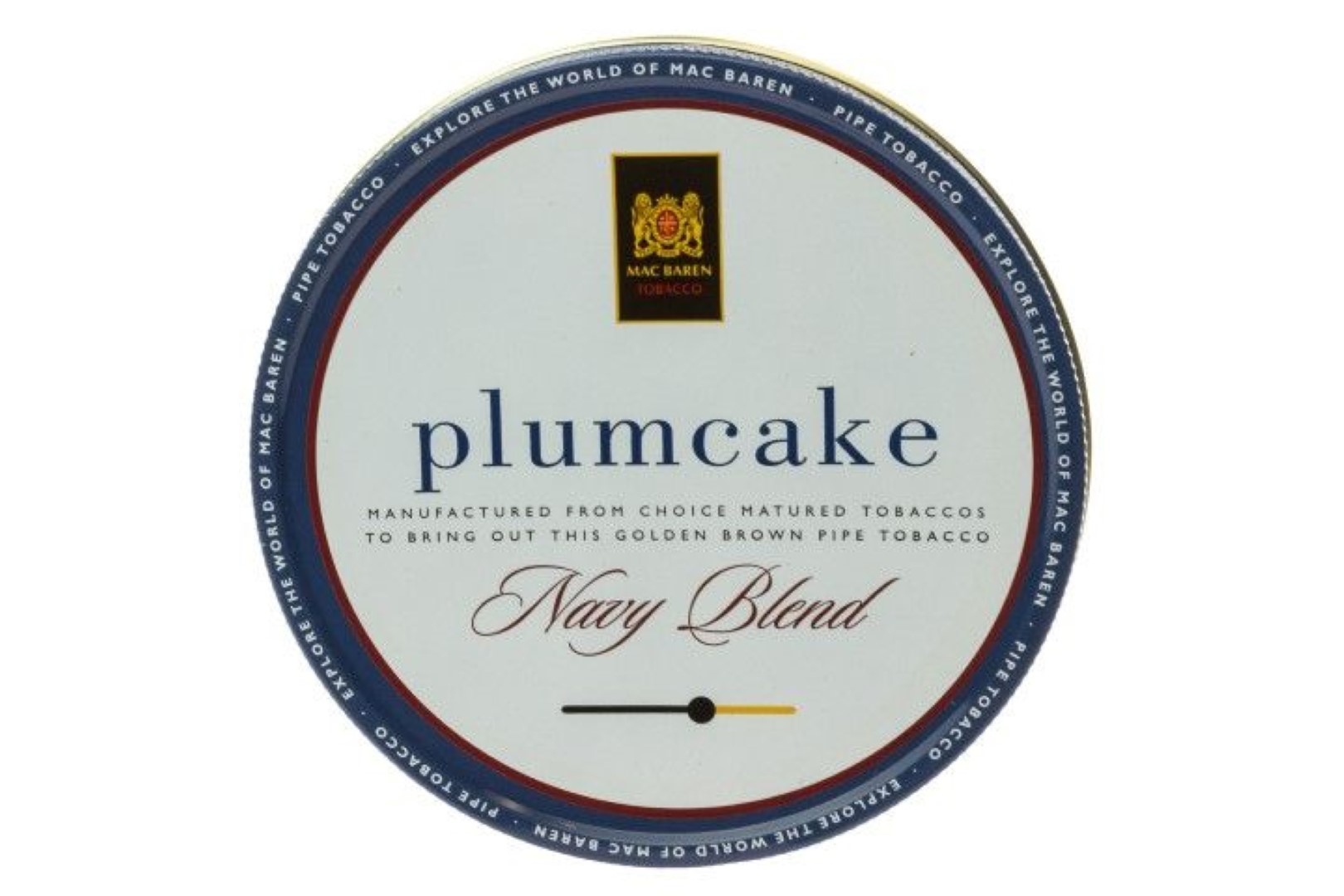 Plum and rum—they aren’t merely a complementary duo for the bard’s rhyme scheme. Plumcake from Mac Baren shows how well these flavors play off each other in practice.

When Plumcake was first introduced in 1957, Mac Baren was merely a line of blends from the Danish company Harald Halberg Tobacco. The name Mac Baren was the company’s attempt to approximate an English sounding name, as German names weren’t doing businesses any favors in the post-WWII era, and Danish names were easily mistaken for German.

However, this line would go on to become so familiar that the company changed their name altogether in 1995 to the Mac Baren Tobacco Company.

This aromatic English blend from their Classics line is a widely praised pipe tobacco. As the name would suggest, the Classic blends are those that have been mainstays for the illustrious company. The Jamaican rum topping offers a slight spice to the mix that adds to the nuance and harmony between the bright Virginias, burley, original Mac Baren cavendish, and Cyprian latakia.

Plumcake is a great blend for English lovers who are picky about their aromatics. It offers all the delight of aromatic fragrance with flavor that works with the tobacco, not too big a personality to get along with the forward condimental tobaccos. This blend is renowned for its dynamic, complex flavors and heavenly room note, but it is one that asks to be sipped to be enjoyed. If you’re more of a puffer, consider using a charcoal active filter to beat the heat while delighting in the flavorful bouquet. 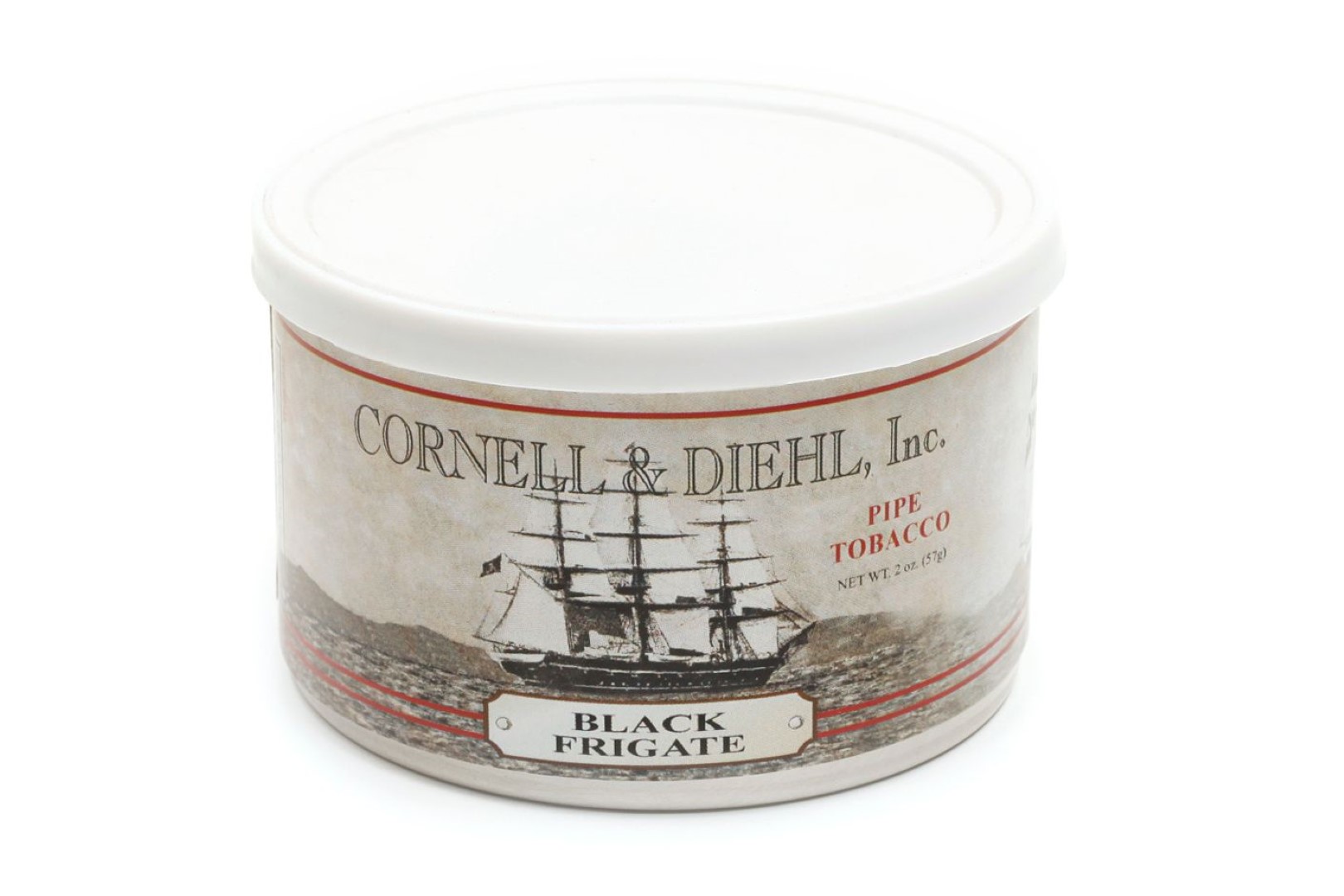 Black Frigate from Cornell & Diehl is one of those great blends that is especially difficult to place into a category. From the tobacco manufacturer’s Navy Blends Series, Black Frigate is truly one of a kind. The Virginia cavendish, soaked and aged in rum, forms a dynamic base. The flavoring is present but discreet and brings a wonderful aroma and sweet spice to the mix, but it certainly isn’t the lone, defining flavor of the blend. The earthy Cyprian latakia and the woody Turkish components bring much of their own to the fray.

This is one of the first blends that saw me branching out from aromatics where the added flavoring is the dominant force, into more woody, spicy, darker blends. Black Frigate was incredibly inviting and remains a favorite. It has the slight rum presence but not in such a coating that it’s depended on for more than an interesting nuance in the mix. 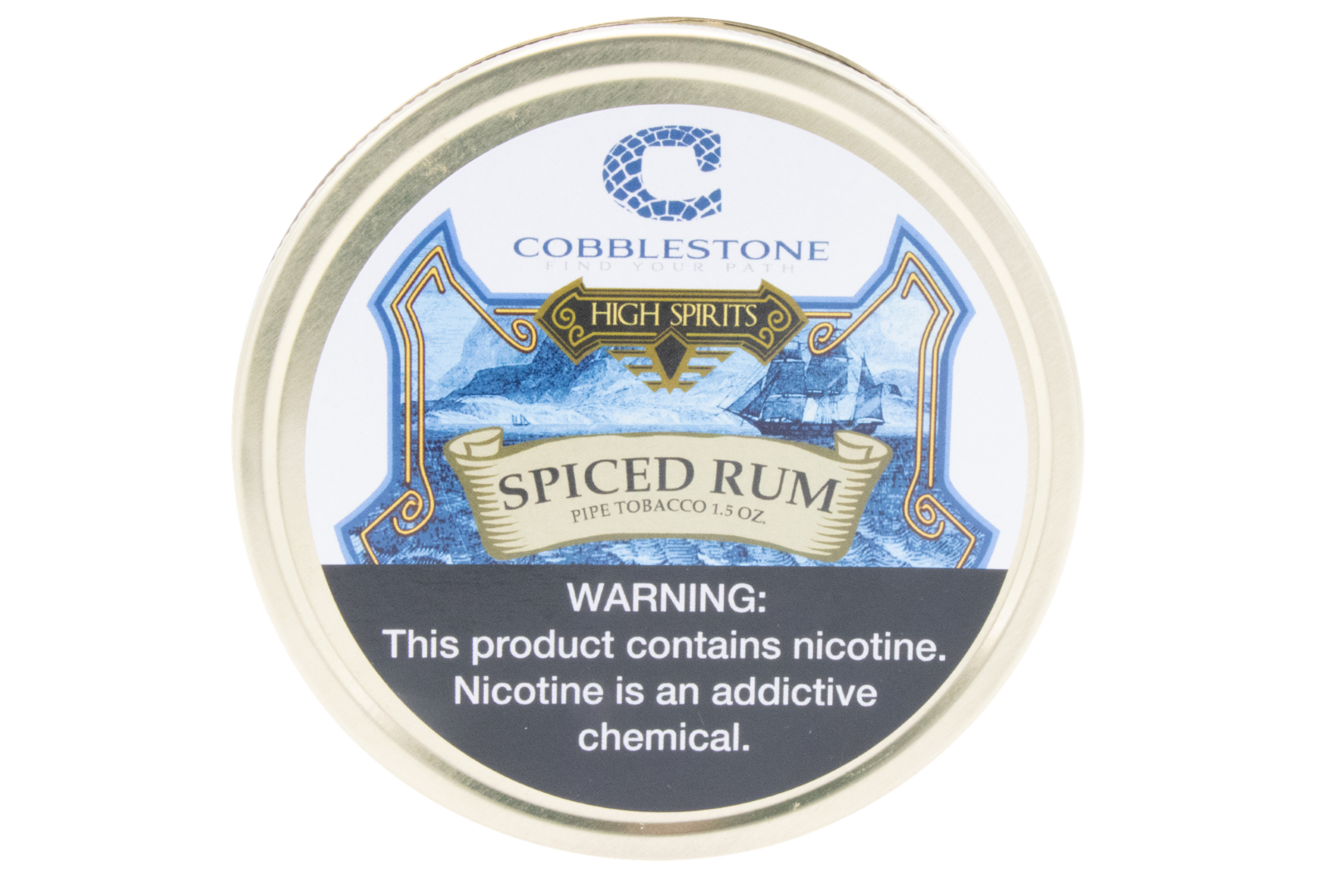 I think I hit my quota for “spirit” puns in the introduction, but we’re not quite through with them yet.

Spiced Rum is one of several great blends from Cobblestone’s High Spirits line of liquor blends. This is a delicious, straight-forward aromatic for those who want a less busy profile and are looking for an aromatic that is true to its title—a blend that kindly introduces itself in the tin note.

Black cavendish, burley, and Virginias set a discreet, earthy foundation for the rich, distinct spiced rum top note. With a mild to medium strength, Spiced Rum is an all-day smoke that fills the room with a pleasant sweetness, sure to be enjoyed by company.

If you’re a fan of liquor aromatics, you really can’t go wrong with any of the outstanding blends that comprise the High Spirits line which also includes Whiskey, Sangria, Kahlua, and Amaretto. 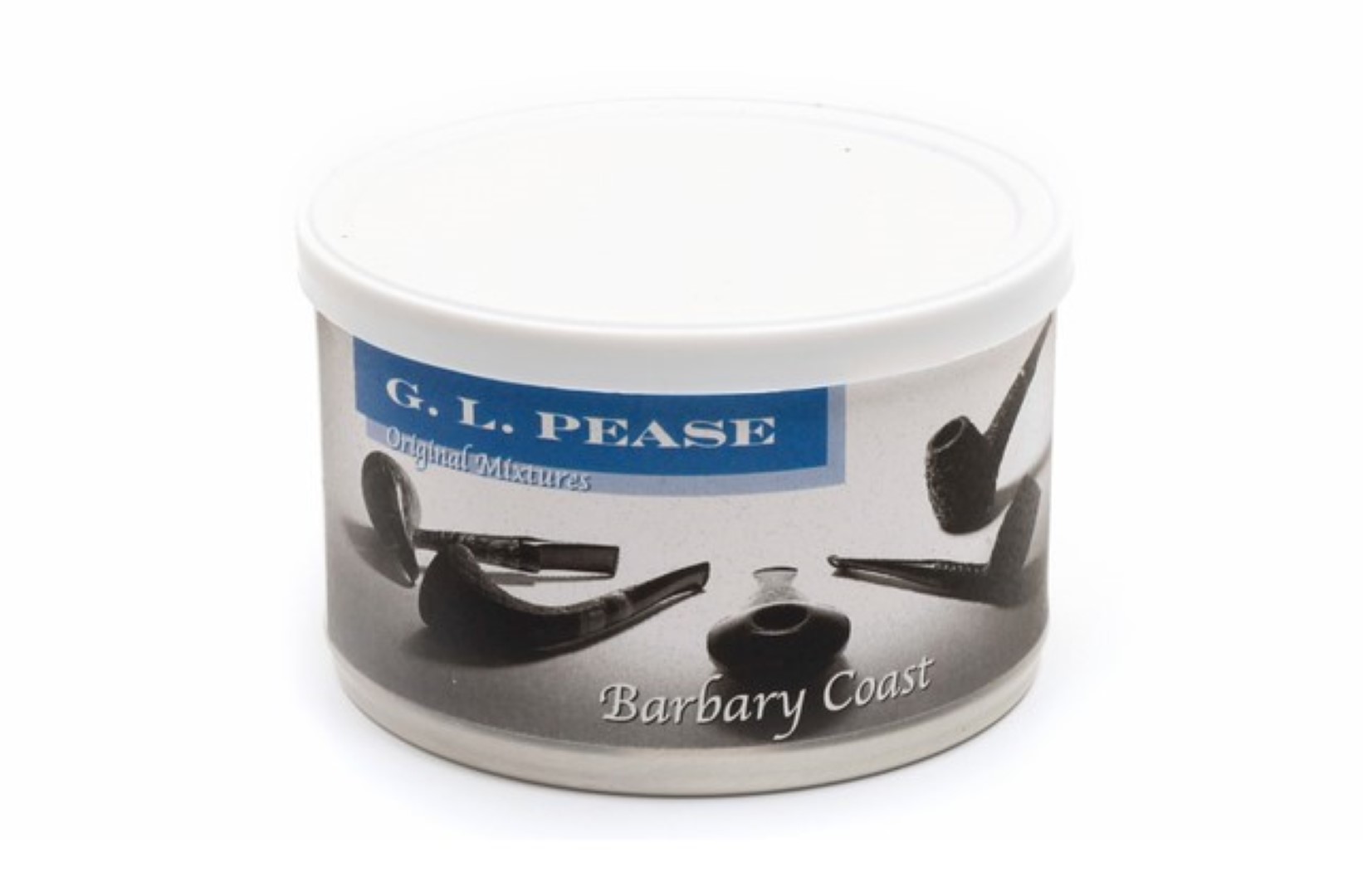 Pease’s foray into professional blending was in 1998 when he started a small operation creating tobacco pipe mixtures with a friend. Despite that brief venture ending in 1999, Pease had already found some success with these blends, so he opted to keep that passion alive and debuted G. L. Pease Tobacco in 2000.

Barbary Coast is one of the earlier blends for G. L. Pease, introduced in 2001. In this blend, the brandy topping mixes perfectly with fine cube-cut burley for a nutty depth on which the sweetness of red Virginias and spice of perique can blossom. This is one of those aromatics that clearly isn’t the outcome of throwing in flavor willy-nilly, but of strategic consideration as to the interplay between the natural flavors of the tobaccos and the top flavor. As Pease says himself , “flavorings, when used, are added with restraint to enhance the natural character of choice tobaccos, not to obscure inferior ones.” 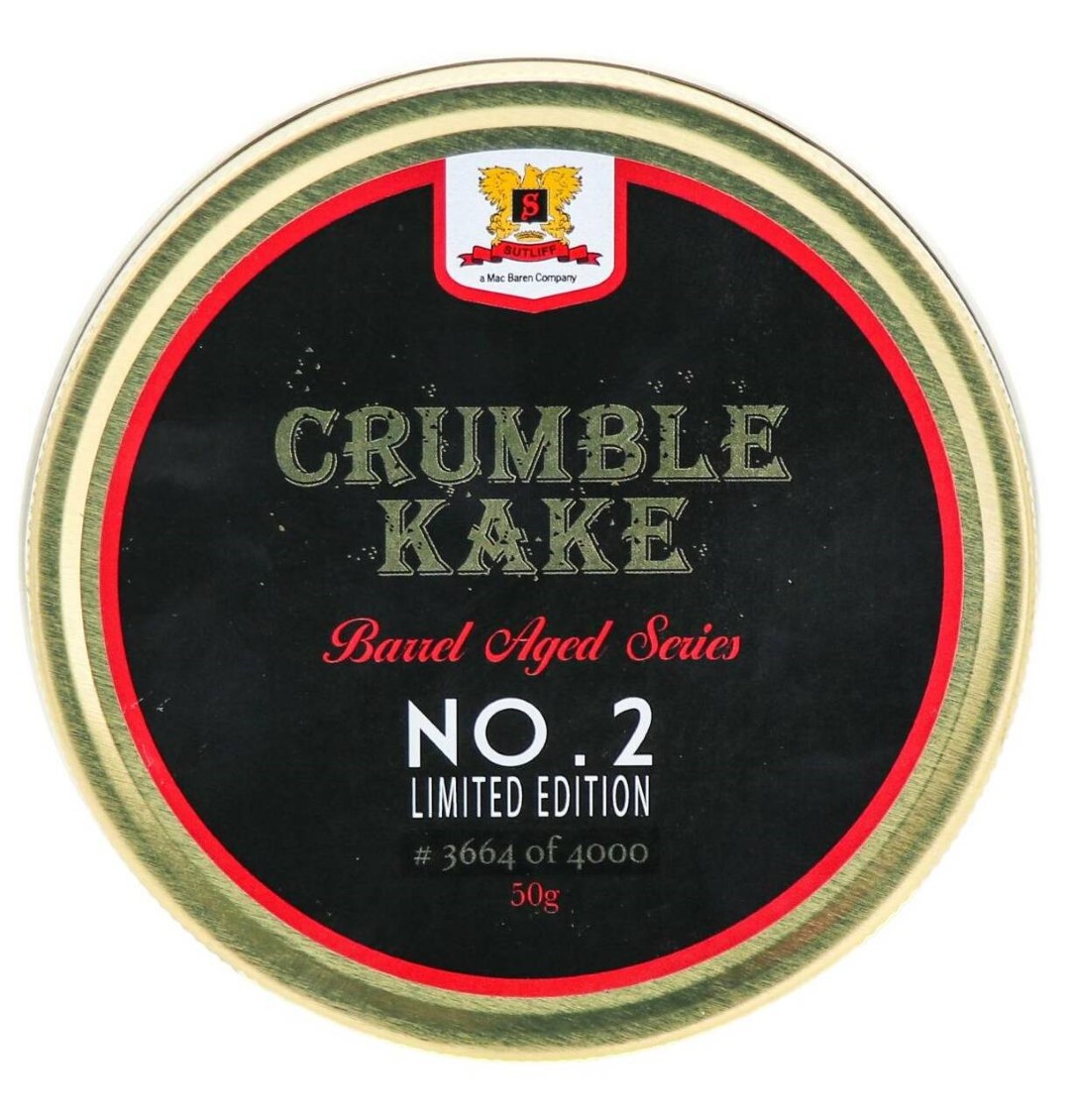 The second of Sutliff’s Barrel Aged Series, Crumble Kake no. 2 sees the pipe tobacco stewards replacing the aged apple brandy barrels of the first iteration for an oak cognac barrel. Pressed into a cake after one month of aging, the citrusy bright Virginias and spicy dark-fired Kentucky boldly intertwine with the sweet and smoky cognac flavoring for a fantastic medium blend.

This is a blend especially worth cellaring, it will surely age wonderfully and with 4,000 tins made, you’ll probably be thankful for your stock once it’s off the shelves. 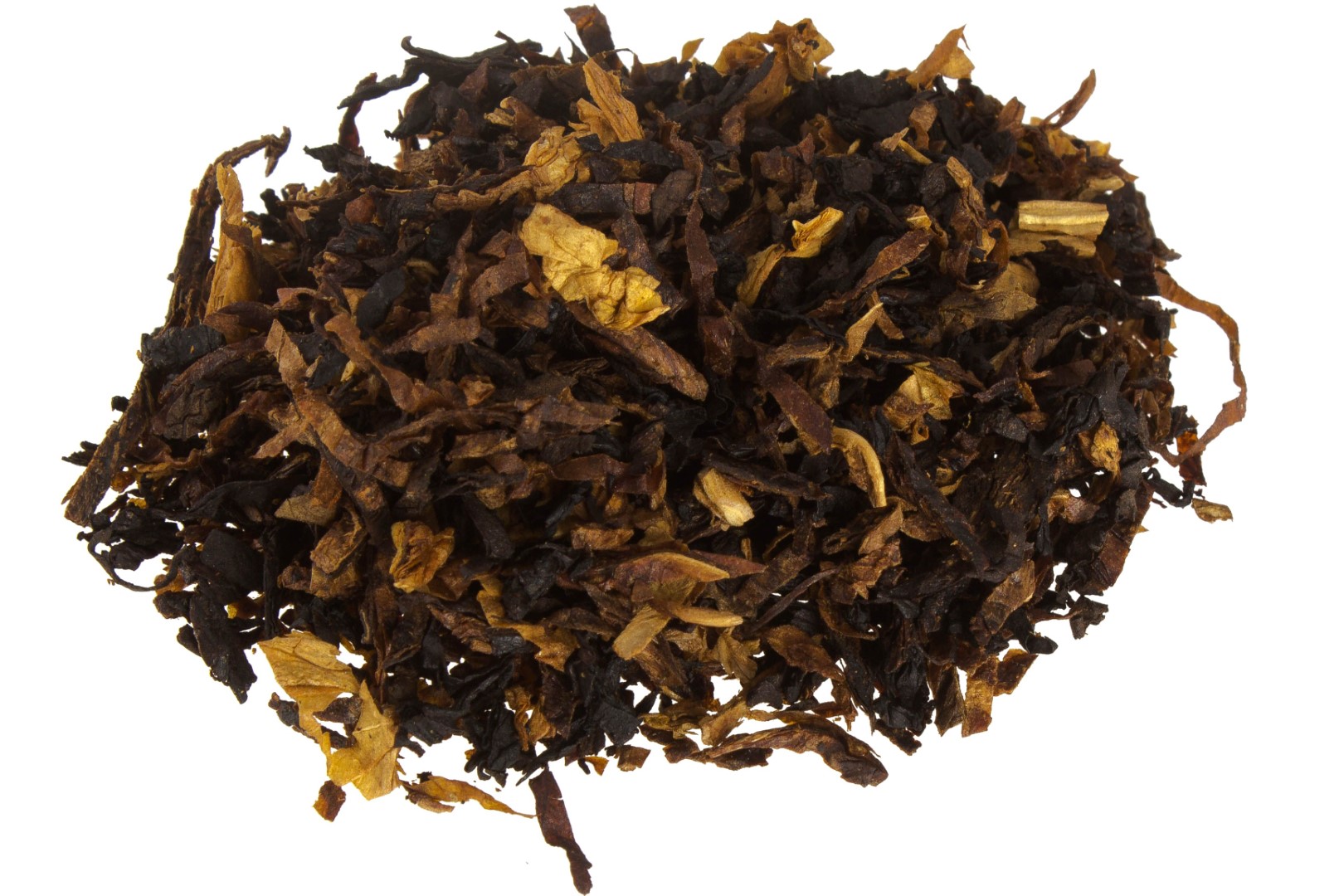 Peter Stokkebye Tobacco exemplifies fine tobacco with four generations of tradition behind it. Peter started his business in the 1970s, but the family’s tobacco legacy goes back further with Peter’s grandfather, Erik-Peter Stokkebye, who opened his tobacconist shop in 1882. Now it is Peter’s son Erik Stokkebye keeping the tradition alive.

This flavorful blend features Carolinian and Zimbabwean flue-cured Virginias, white burley, and black cavendish. To pull it all together, fine aged whiskey from the Scottish Highlands is added for a lavishly fragrant smoke. The whiskey is truly the front player in this blend but not without its support from the nutty burley and citrusy Virginias. The slow, cool burn on this mild aromatic makes it a great option for greeting the day. I recommend packing a pipe with PS 38 and sitting outside with that morning coffee. 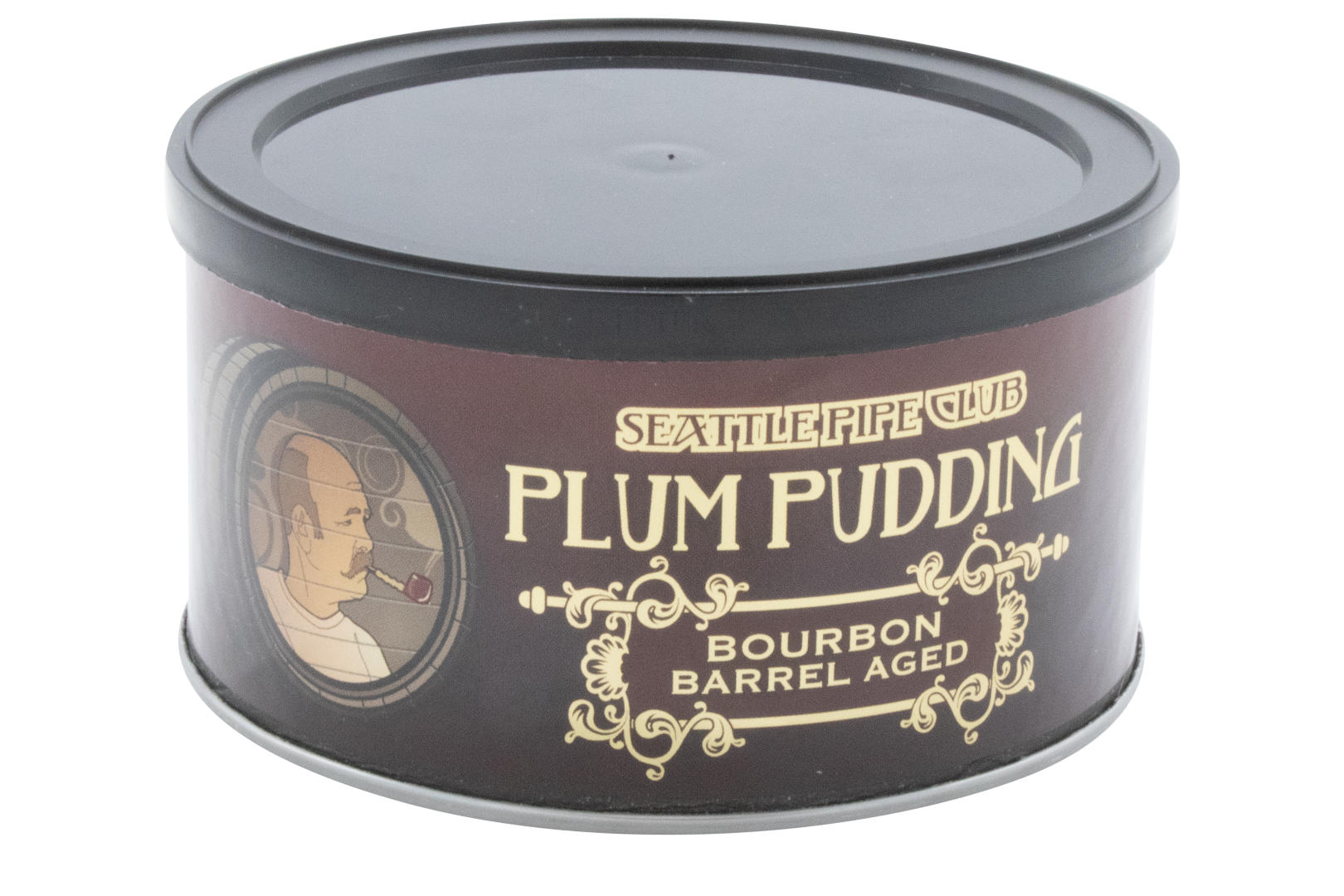 Following Mississippi River, Plum Pudding was master blender Joe Lankford’s second blend. Upon sharing it with his comrades at the Seattle Pipe Club, it was also his second instant classic. This modification on the original is truly the blend you never knew you needed. I mean, it’s not as though the stalwart Balkan blend was at all lacking. But I’m always more than happy to embrace another excellent blend.

Bourbon Barrel Aged is, well, the name pretty much says it. For one-month the blend is stored in a charred oak Kentucky barrel, taking in the aromas and flavors of the bourbon-imbued wood. In fact, the Plum Pudding variation is neighbors with Crumble Kake no. 2, stored on the Sutliff factory shelves, waiting to be de-barreled, pressed, and cut into crumble cake. It is even tinned with a piece of one of the barrel staves before making its way to your pipe’s chamber (or to your cellar, as this is another great aging blend).

Plum Pudding Bourbon Barrel Aged is a refined smoke for those who like a little guest star flavor that doesn’t mellow boldness. This is a full-bodied smoke in which spice comes through in great harmony with the embedded bourbon flavor. All in all, it’s a dynamic blend meant to be enjoyed slowly—although it has a cool burn, its complexity deserves a patient cadence.

And I should also say, Lankford has developed his first success, the beloved English blend Mississippi River, into an impeccable liquor blend with Seattle Pipe Club’s Mississippi River Rum Barrel Aged. These are two boutique blends you really have to try. 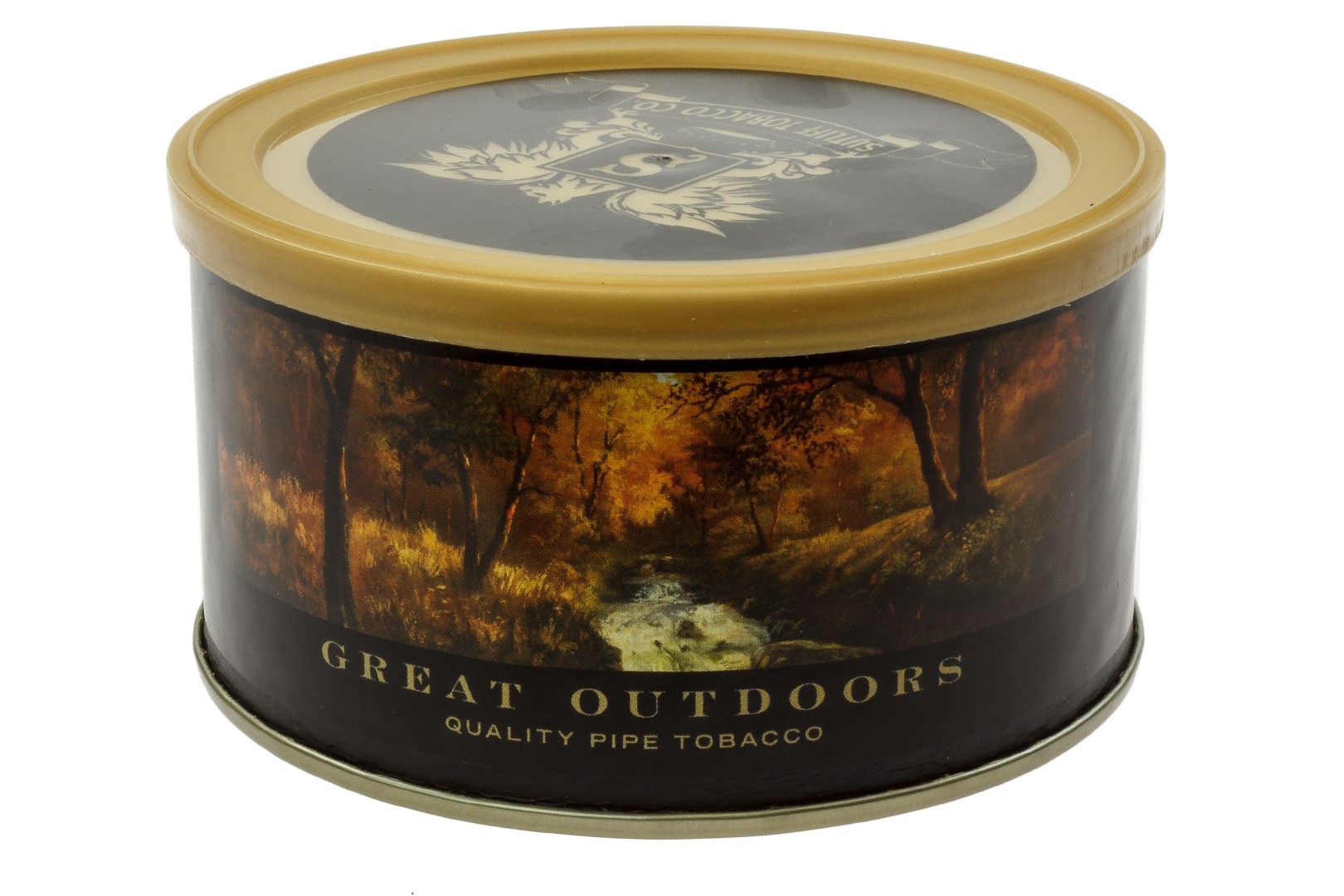 Great Outdoors is an impressive blend from Sutliff’s Private Stock brand. Geared toward the spirit of the American outdoorsman, their aim is true in each draw of this coarse-cut aromatic.

It seems Carl McAllister, the master blender behind so many of the beloved mixtures from Sutliff Tobacco, was aptly guided by a maxim essential to an adventuresome trekker: pack light and only what you need. In this blend, black cavendish and burley modestly set the foundation for the anisette and vanilla top flavors. The liquor addition in this blend is not so forward, its role is a humble one that brings a delightful accent to the notes of grass, brown sugar, and honey. This blend is discreetly sweet and has a wonderful room note. 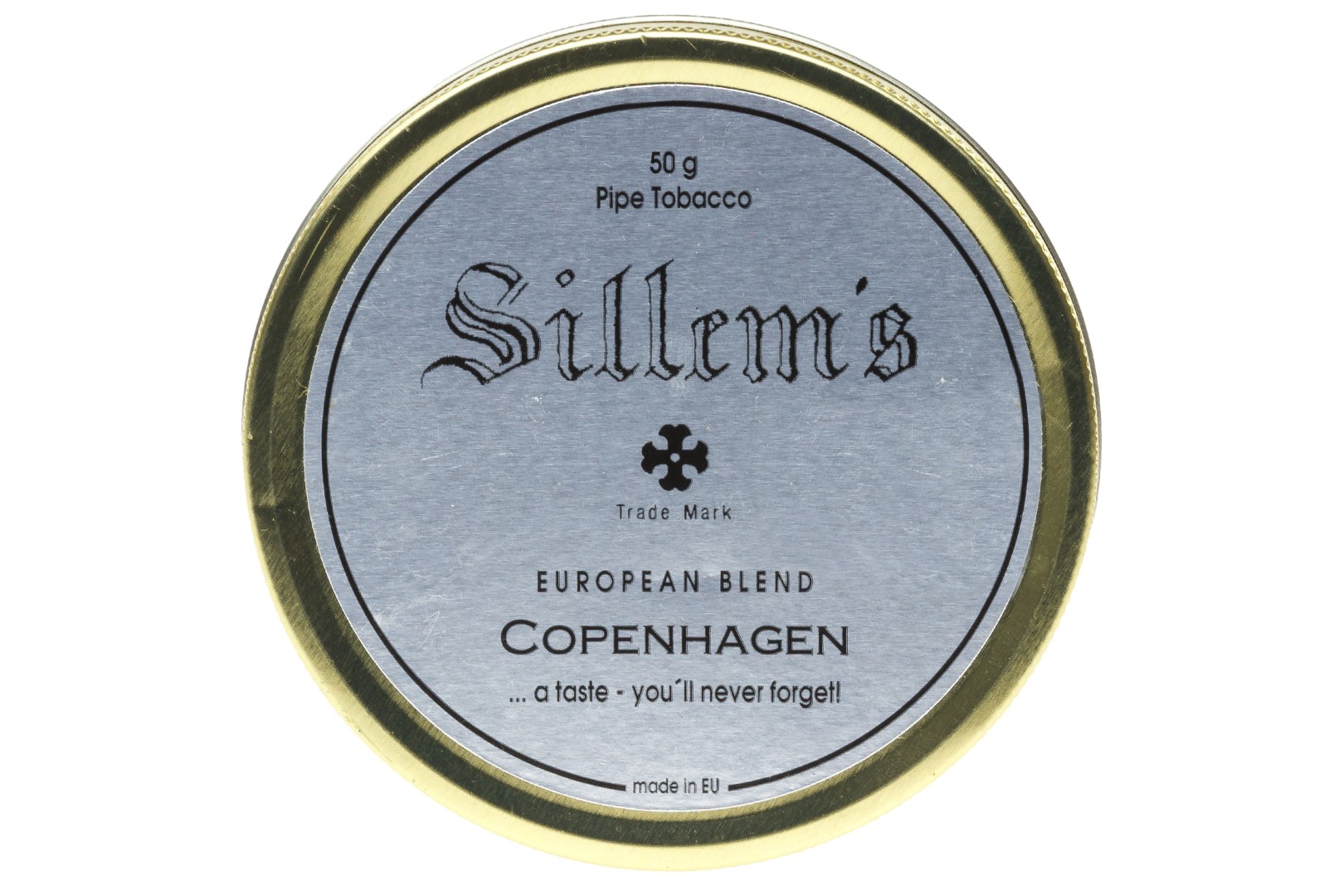 The name Sillem’s stretches back centuries in pipe tobacco history. Appropriately, there is something old-world wholesome about the Copenhagen blend. It carries the tastes and flavors that one associates with a haimish, peaceful atmosphere. You want to light a fire, pour a drink, and grab a book with this aromatic.

Black cavendish, burley, and Virginias form the base of Sillem’s Copenhagen, on which flavorings of amaretto, nuts, and beans mingle in a dynamic array. The Virginias most prominently feature in the tobacco taste, but the burley gives a wonderful body to the profile on which the sweet, lightly fruity lilt of the amaretto carries a gentle melody throughout.

Like the tin says “…a taste you’ll never forget!” It certainly is one of those that just stays with you and can be a conduit, summoning the peace of the evenings that it’s attended in the past.

We all have our individual tastes and preferences; the best liquor blend is the one you’re loving. But hopefully a few of the blends on this list stuck out and lead you to some new favorites in your pipe smoking. 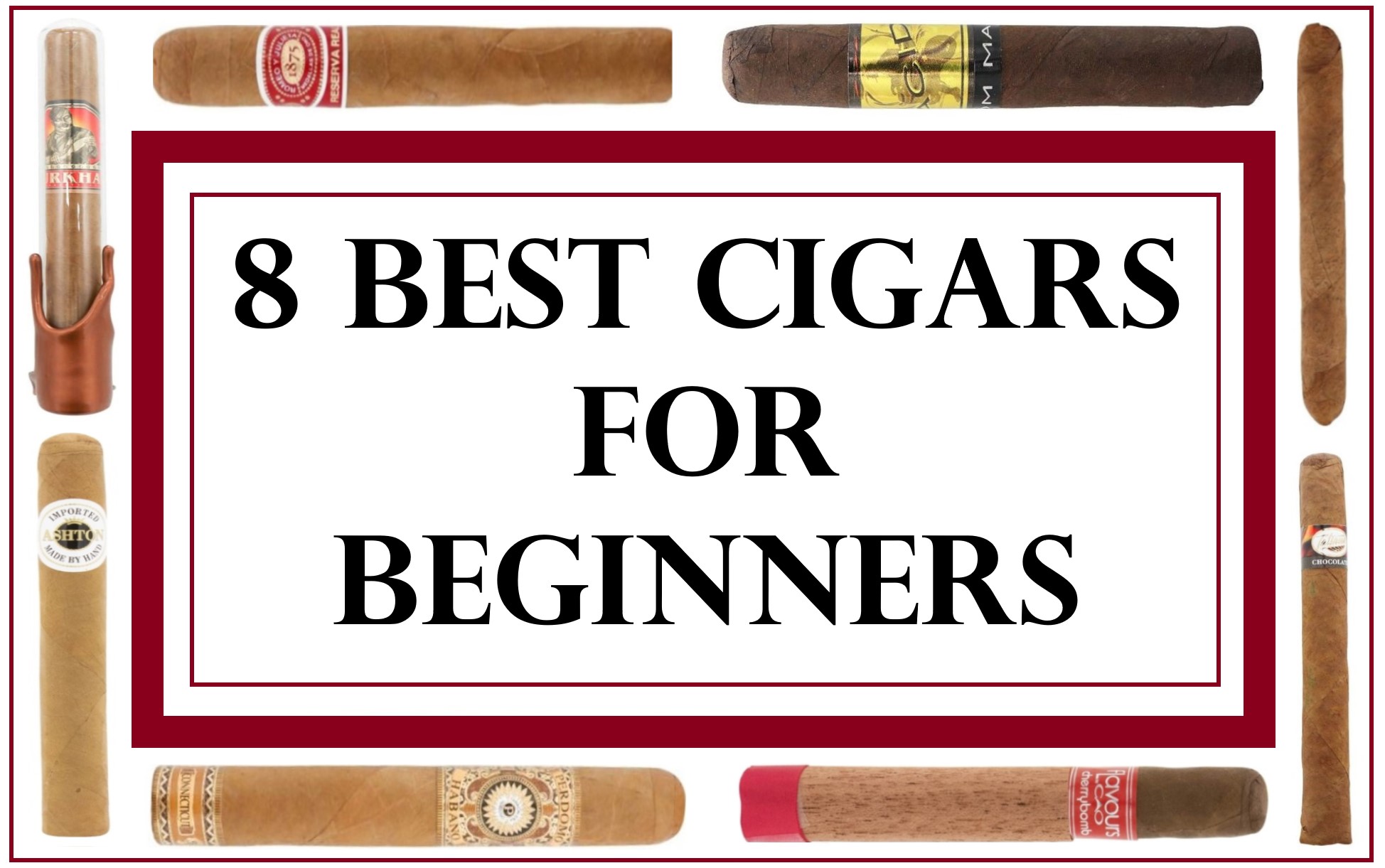 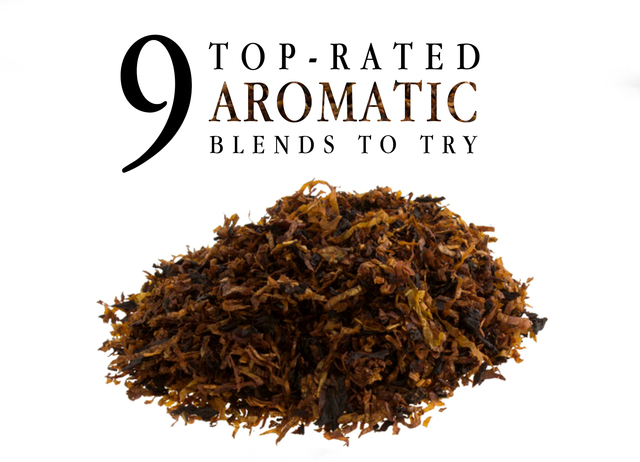 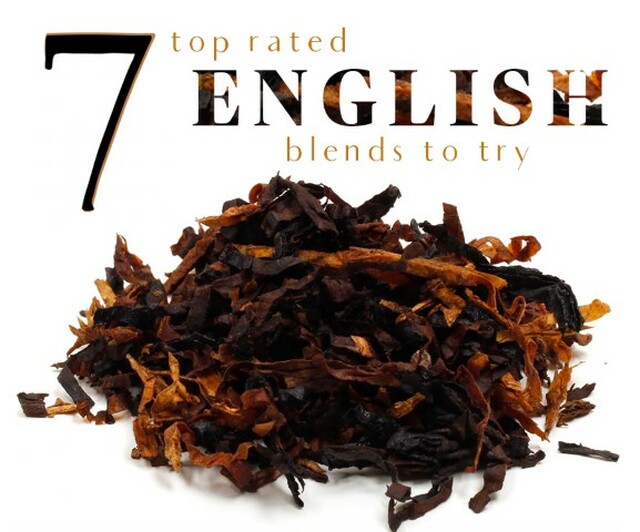