The Right Environment for Aging Tobacco

Keeping Track of your Cellar

If you’re at all like me when I was starting out, “cellaring” is something you often hear mentioned, but it carries a daunting undertone, or at least implies a prerequisite experience not yet achieved. It took me a while to even look into.

Maybe it’s something about the word “cellar,” I thought there would be a lot of investment, preparation, and finicky maintenance. I soon realized how simple it was and wished I started sooner.

Like most things in pipe smoking, you can take a meticulous approach. You can put together a spreadsheet, monitor with a hydrometer, develop a procedure for how and what you cellar, when something gets opened, etc. But you can also get by just fine, reaping the benefits of aging tobacco, with a very uncomplicated approach.

There are a lot of reasons to cellar tobacco, it’s economical, practical, and makes for some fantastic blends while letting us stroke that inclination toward curiosity and experimentation so common to pipe smokers.

Let’s start with the why and then get into the how.

The unfortunate truth is tobacco isn’t getting any cheaper. This isn’t just a matter of inflation, but the threats from excise tax and regulations. By even the most sober judgment, it’s evident prices will go up as they have been. Does that mean we’re facing the “tobacco apocalypse” as some pessimistically lean to? That most of us will get priced out? No, it just means you’ll save in the long run by stocking up on some favorites.

Blends change. Blends are discontinued. Brands close their doors. Varietals become inaccessible. A sad truth but it’s the reality of things. Cellaring some favorites is a good measure of insurance that you won’t be without them, or at least not for a long time.

That also means you may end up with some aged and discontinued blends. If not for your own enjoyment, you could find yourself making a trade at a show or club meeting.

Setting aside for later

We’ve all experienced disappointment with a blend before. It’s always a good idea to put that tobacco away without just letting it dry out in a tin or trashing it.

First of all, tastes change. This is true for everyone but especially beginners who may be trying blends that, for many, are an acquired taste, such as those containing Latakia or Perique. Or maybe that Virginia causes too much tongue bite and you haven’t learned to keep a cool smoke yet. Basically, there’s a lot of reasons you might love that tobacco later. And even if you don’t, it’s worth preserving to gift to or trade with a fellow pipe smoker.

Aside from how your own tastes and experience may change your impression of a blend, the blend itself will change too.

Aging tobacco does wonderful things to the profile. The flavors marry and refine in interesting, complex ways. Tobacco, much like wine, “improves” with age, as it's often put. Now, I use the quotes there because it’s not quite that simple, different types of tobacco age differently and the way they change may or may not be preferable—that entirely depends on your personal taste.

Let’s get more into the weeds on how certain tobacco ages so you can have some direction on what to expect from cellaring tobacco.

Virginias are the most appreciated for their aging qualities, and go on refining for longer than other varietals. A general consensus is that there’s an approximate amount of time a varietal improves from aging before declining. The range in which that age is reached for each blend is of course a matter of discussion and preference. Virginia tobaccos’ potential for aging is notoriously long—they could go on developing into interesting new profiles for decades and decades. This is due to how Virginias' high sugar content affects the fermentation process.

Over time Oriental tobaccos tend to soften, moving away from that slight spice and take on a more fruity taste. Not on the same scale as Virginias, but they too have a higher sugar content as a result of sun-curing preserving the natural sugars in the leaf.

Latakia mellows and loses some of its robust smokiness over time. Although, as it ages with a blend and flavors are disseminated, it can impart some unique qualities to the unified mixture. So aging English and Balkan blends for too long may not be ideal for the Lat-bomb lover, but for those who appreciate Latakia’s role when used more as a team player rather than a headliner, having some years, or even months, on one of these blends can make for some great smoking experiences.

Additionally, G. L. Pease posits in his Briar & Leaf Chronicles that there is a stage after the mellowing of Latakia where it will increase in complexity and richness.

Aromatics are a bit of an exception. You don’t want to age Aromatic blends too long, the extra casing from the top flavoring doesn’t refine like the natural components do, arresting the aging process, and some say even tarnishing the blend. But two things to keep in mind:

How to Cellar Tobacco - The Do’s and Don’ts

Cellaring tobacco is easier than you may think. There may be certain conditions that need controlling, but they are simple and far less particular than, say, aging cigars in a humidor.

What Is the Right Environment for Aging Tobacco?

Luckily, the right environment probably already exists somewhere in your home without any manipulation. Plenty of folks put their sealed jars and tins in a closet or cabinet or just some dark place and have no problem, it’s usually that simple. But of course, there are some factors that may be relevant to one cellar and not another, such as regional climate. So for good measure, we’ll cover all the bases of a proper tobacco cellar’s environment.

You’ll hear different ideal temperature ranges. So long as your tobacco is approximately in the “room temperature” range, it shouldn’t be a problem. I’d say between 50-70 Fahrenheit is safe. Cooler is better, but do not keep your tobacco in the fridge as it’s too dry.

What’s really important is that the temperature stays relatively consistent. The seal on the jars and tins of your aging tobacco can be broken if they expand or contract too quickly from an abrupt shift in temperature. 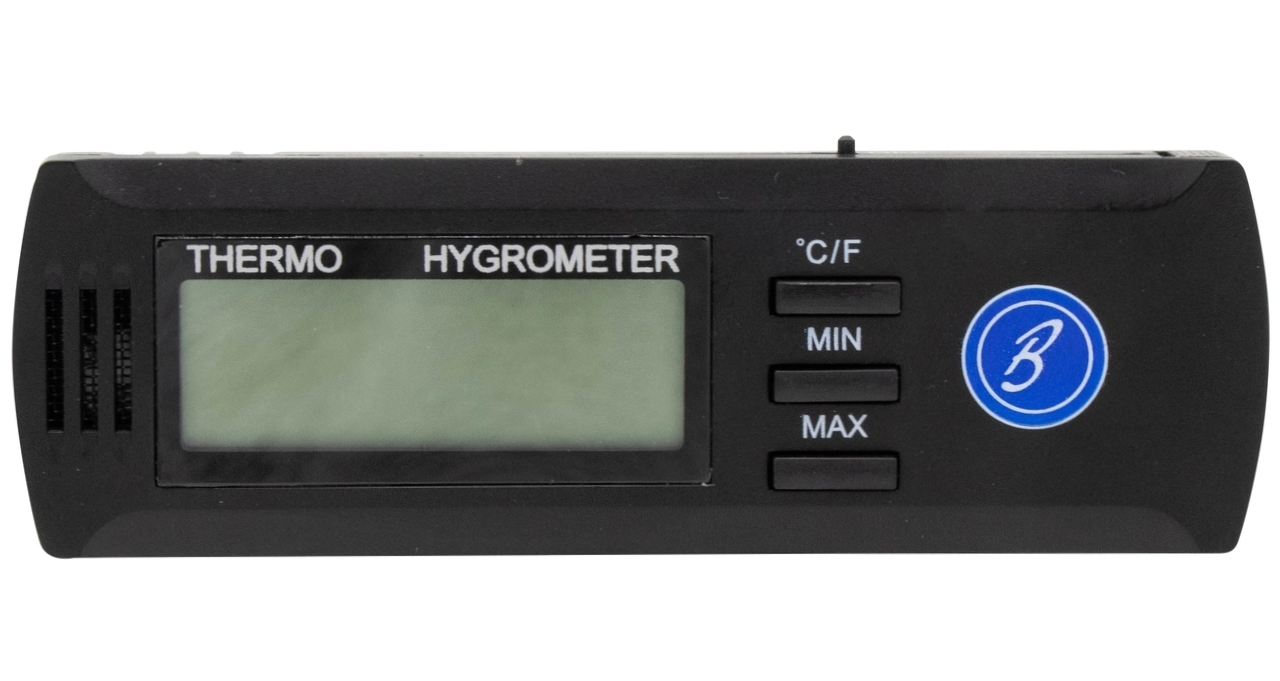 Then, you need to make sure there’s not too much humidity. Humidity can cause rust, corroding a jar or tin’s seal.

Getting a hydrometer is a great way to check that the humidity isn’t too high or fluctuating too much.

It wouldn’t be a bad idea to keep your jars and tins inside of some sort of container. I especially recommend a cooler, as they’re designed to insulate, so whatever fluctuation occurs in the room will be less dramatic in the container.

Store your tobacco in a dark place

You don’t want to store tobacco in direct sunlight. You’re best off keeping your tobacco cellar in a closet or some other dark environment.

Keep Track of What You Have Cellared

It’s nice to have some sort of system in place to keep track of what you have and how much age you have on it.

Personally, I like updating a Google Spreadsheet. You absolutely don’t have to make such a song and dance of it, all you really need is a notebook and pen. I just love an excuse to make a spreadsheet.

Here's a mockup to show how I've set mine up. I've added functions so that Elapsed Time automatically updates based on the Cellar Date input. Similarly, every number I put in the Weight (oz) column automatically updates the blue cell in the top right corner with the sum of the whole column so that it displays the total weight of tobacco in my cellar. Why is this necessary? It’s not really. Spreadsheets are fun.

Finally, I use the # column to assign the corresponding jar a serial number. I’ll write the name of the blend and date on the jar as well, but putting a corresponding number on the lid just makes organization easier for me.

Again, a notepad will do you right. Heck, some people just write the sealed date on the tin or jar, stash it away, and feel it out. The only right way is the way you prefer.

Different styles of tins and jars come with their own implications for making a tobacco cellar.

Jarring is necessary for cellaring tobacco that is packaged in bags (bulk) and pouches like Amphora or Captain Black—really anything not sealed airtight. Jars can also be an alternative to cellaring in the tin. I’ll go into why transferring to a jar might be ideal in the next section.

If you’re jarring tobacco, make sure the jars you’re using create a seal. This would be those with the traditional mason jar design. Notice the orange ring in the image below. It’s made of a supple compound that acts as a gasket creating a seal when the screw band presses the lid down on the rim. 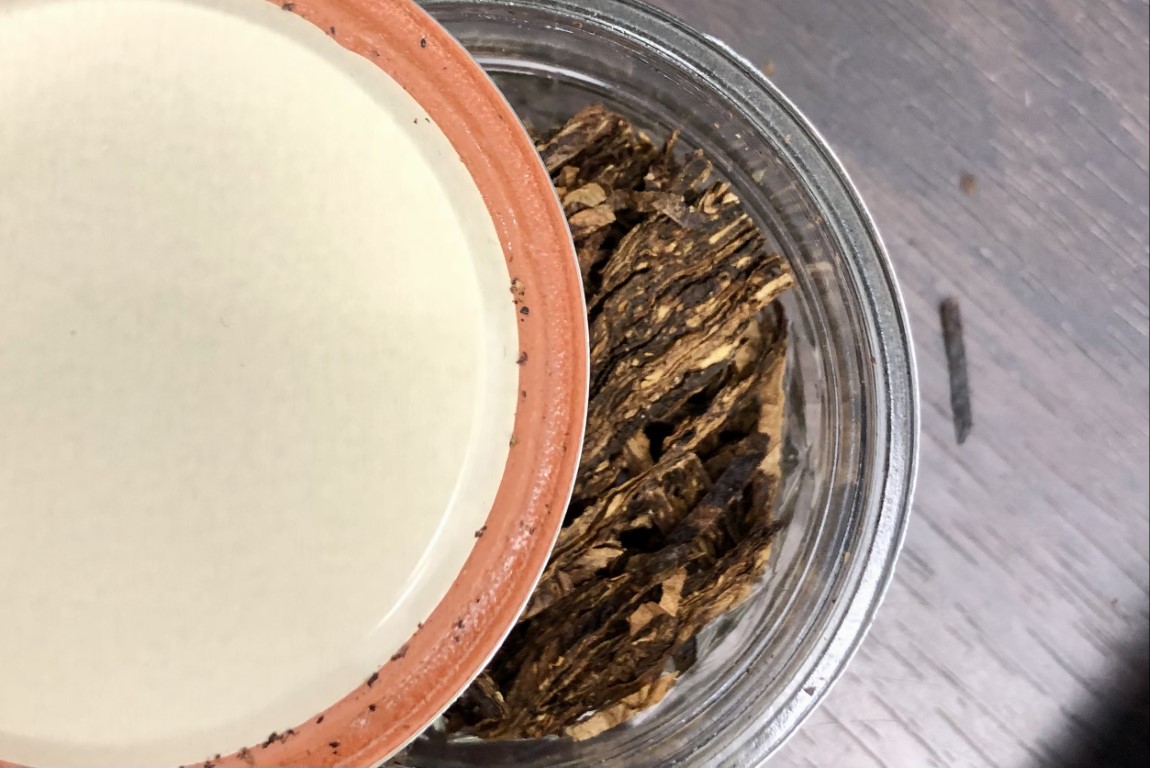 By the way, this is one of my jars I have at my desk for a blend I’m currently smoking. If you’re aging, make sure the gasket is clear of debris that might obstruct a seal.

These jars are also ideal for storing your on-deck blends (those you're currently smoking). If you’re regularly opening and closing the jar, the tobacco isn’t going through the aging process, but it is a good way to keep the mixture from drying out. And hey, they look nice on a shelf.

When you do fill a jar for aging, it’s recommended that you leave some space at the top. You want a contained environment but the air in the sealed container facilitates aerobic fermentation before anaerobic.

These are the familiar twist off or coin-pop tins. It’s often said that because they are vacuum sealed, tobacco left in these will age slower than other containers as they don’t go through aerobic fermentation due to lack of oxygen.

These are those tins from Cornell & Diehl, G. L. Pease, Captain Earle’s and such. Since they aren’t vacuum sealed, but are airtight, they allow for both stages of fermentation to occur.

This is a possible route if you want to go the extra mile for insurance, but it’s not totally necessary. The two cases that you might want to consider is with Samuel Gawith tins and Esoterica bags.

Gawith tins have been reported to sometimes fail to keep their seal for long periods of time. While the bags Esoterica comes in are sealed and fine for aging, some report that they’re easily punctured or worn down. I can’t say I have any personal experience with this but if you want to double down, you may opt to store these packages in vacuum sealed bags. That way if the seal is compromised, the tobacco will go on aging. Alternatively, you could re-seal in jars. 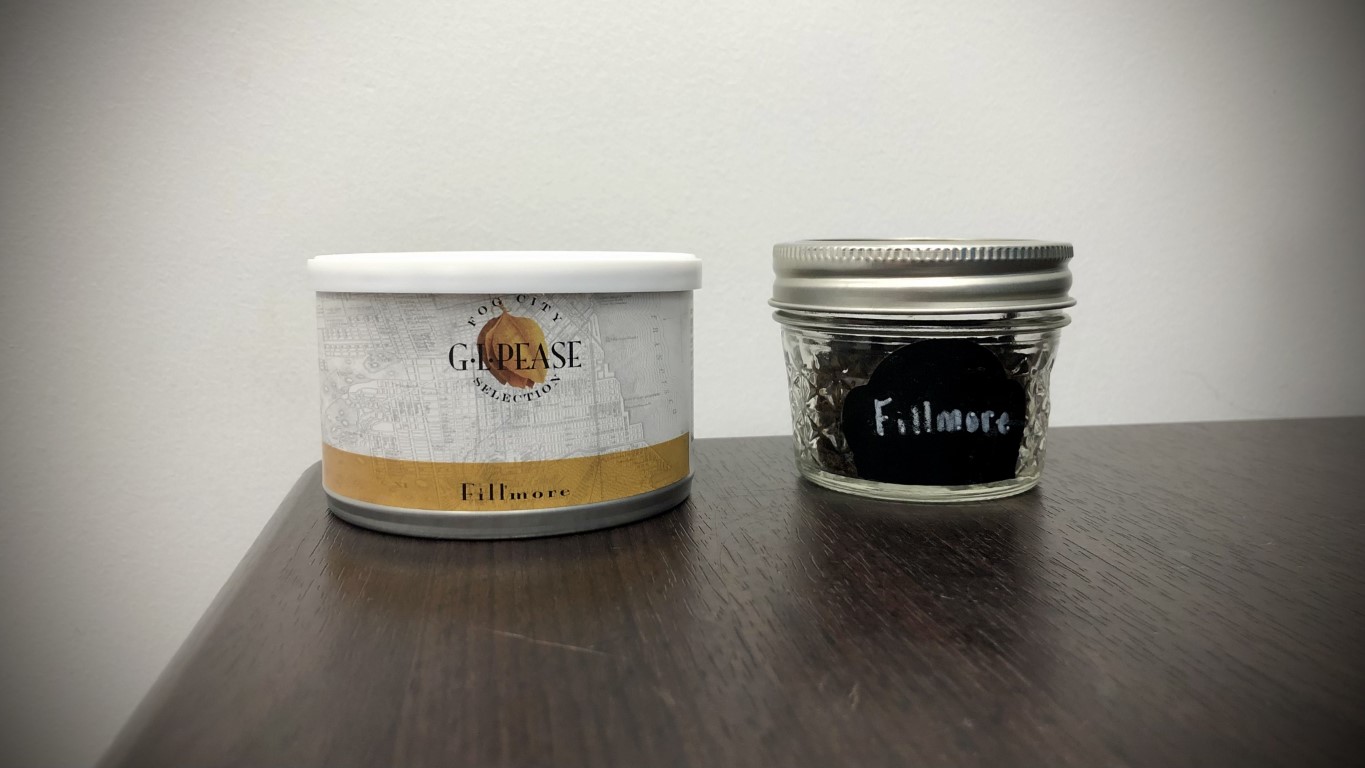 Jars are your best option for cellaring bulk tobacco or anything that didn’t come in an airtight container. But when you receive a tin, it’s already aging, no need to jar, label, or any of that. Let’s wrap this up with a little on why you might prefer one or the other.

Personally, my cellar consists almost entirely of jars, even for the blends that originally came in tins. This doesn’t stem from some theory of jar supremacy regarding the aging process, but it just works best for the way I engage with pipe smoking.

If it seems like a lot to take in, just get started and I'm sure you'll find it's not all that much.You can refine your approach as you go, or not. Just consider how you engage with pipe smoking, and find what speaks to that. But as always,  reach out with any questions and we'll be happy to help.