Albert Einstein, one of our favorite notable pipe smokers, said:  “Everything should be made as simple as possible, but not simpler.” 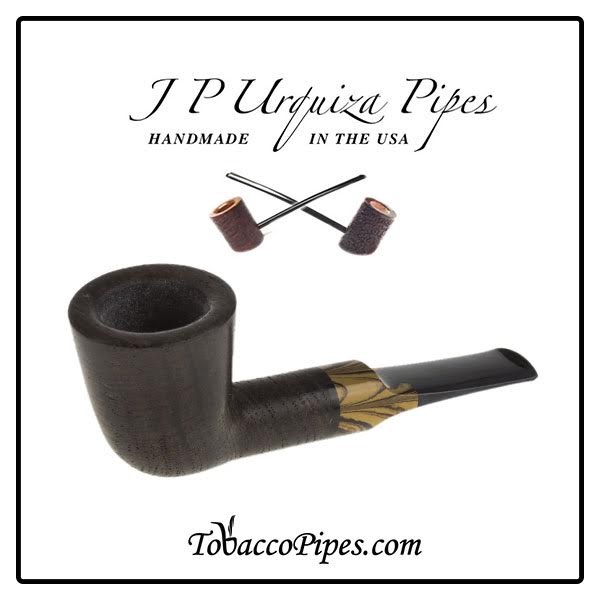 We assume Einstein wasn’t referring to tobacco pipes, but the work of J.P. Urquiza could be defined by it.

J.P. Urquiza is the newest artisan pipe maker to join the TobaccoPipes.com family. As a new pipe maker, Urquiza has mostly limited himself to the carving of just a couple of shapes. In doing so, he is able to distill a myriad of techniques and edicts into a manageable short list of skills to master. Through simplification, born at first of necessity, his skill has developed at a fast pace. Urquiza’s deceptively simple pipes are both beautiful and nearly flawless in their function.

I sat down with J.P. Urquiza to talk about making one shape, starting completely by hand and going the distance for your equipment. 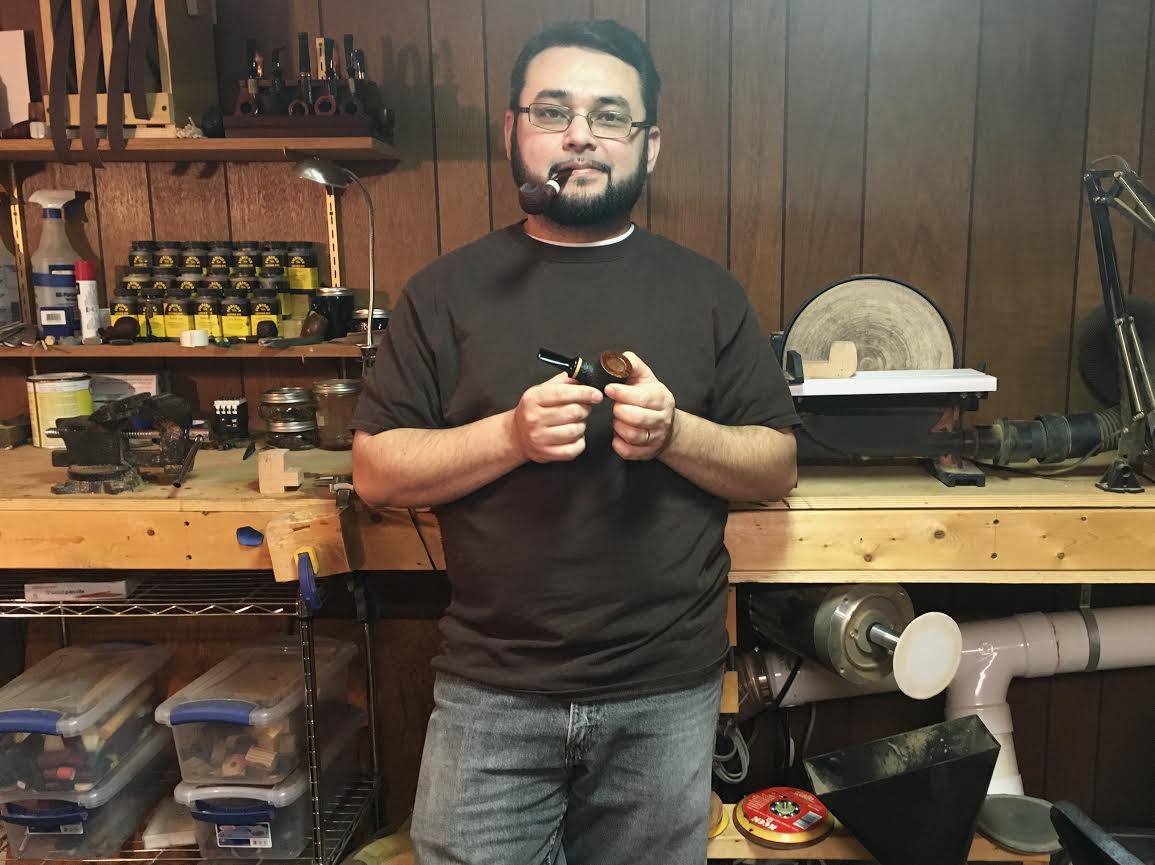 A conversation with J.P. Urquiza

Years later, in 2012, I was walking through an outdoor market and there happened to be a little smoke shop there. They sold briar pipes. It made me remember that smell from years before, and so I bought one.

That first pipe wasn’t great quality, I think it was made out of rosewood. But it was enough to interest me.

I see a guy walking down the street smoking a pipeall the time now. Sometimes I wonder if he’s the same guy I saw back then. It’s not an everyday thing, to see someone with his pipe on the street.

Renia: What motivated you to start making your own? How did you get started?

JP: I made my first pipe around February of 2013. It wasn’t long after I started smoking one. It seemed like something I could do, so I tried.

My first handmade pipe was a Poker made out of cherrywood. I used a premade acrylic stem, but the pipe itself was made with hand tools. It didn’t take me long to start working with files.

Once I knew I could do it, I was hooked, but I didn’t have the right tools. All of my first pipes were Duke shapes because I didn’t have big enough pieces of briar to make the briar shanks. I didn’t know the shape was called that, at the time, I just did what I could with what I had. No one else was making Dukes at the time, so it was unique enough that people were interested. Every time I put a picture of one on Instagram it would sell, so I just kept making them.

I made my pipes that way for about a year. Then, I purchased a wood lathe that I used for a few months until Eric Gainey announced his workshop was for sale and I was able to purchase it. I flew to Florida and drove it all back in a rented truck, so that I could have a lathe and the other tools I needed to make my pipes a little faster and with a bit more consistency.

After acquiring the shop, I wanted to make a different shape and saw how popular the thick-walled Pokers are. I’ve been working on perfecting my Poker shape ever since. 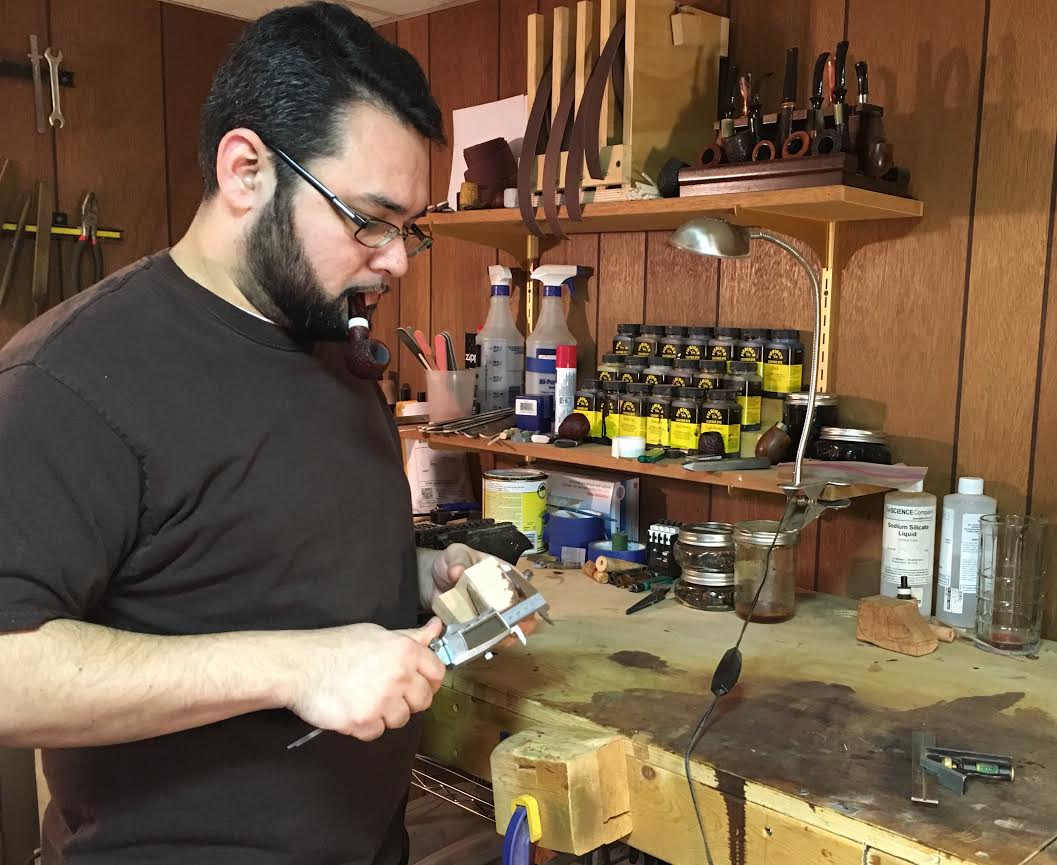 Renia: It’s cool how you didn’t let logistics or equipment keep you from creating. Does making them by hand change how you choose a pipe? What do you think makes a good pipe?

JP: The briar needs to be good to begin with. It doesn’t matter how talented the pipe maker is, if the briar’s no good it won’t work. It needs to be aged and dried. Once you’ve got a good piece of briar, then you need a well-made stem and careful drilling that gives a good draw.

Pretty much everything beyond that is open to your own opinion. However, from my own experience, thicker walled pipes seem to be smoke better for me.

There isn’t much that’s concrete. Most of what we argue about for what makes a good pipe is opinion. Everyone likes something different and it’s just their opinions.

Renia: That’s a fairly open explanation. I like it. Do you have a favorite tobacco that you like to smoke?

JP: I’m generally a fan of milder pipe tobaccos, but I do like Latakia. My favorite tobaccos are Lane 1Q and Frog Morton Cellar.

Renia: Both good choices. Do you have a favorite pipe that you’ve made? That you own?

JP: My pipe collection is fairly large, something in the neighborhood of 40 pipes. Most of them are inexpensive and factory pipes. I’m just starting to work on building a bigger artisan collection.

My Savinelli Pipes from the 1970s are nice, consistent smokers. I have a pipe I made last year that had a small flaw in it, so I got to keep it. That one’s a good aromatic smoker.

The Eric Gainey estate pipe I just purchased is likely going to take over as my favorite though. It’s my first, and since I have his equipment I feel connected to it. 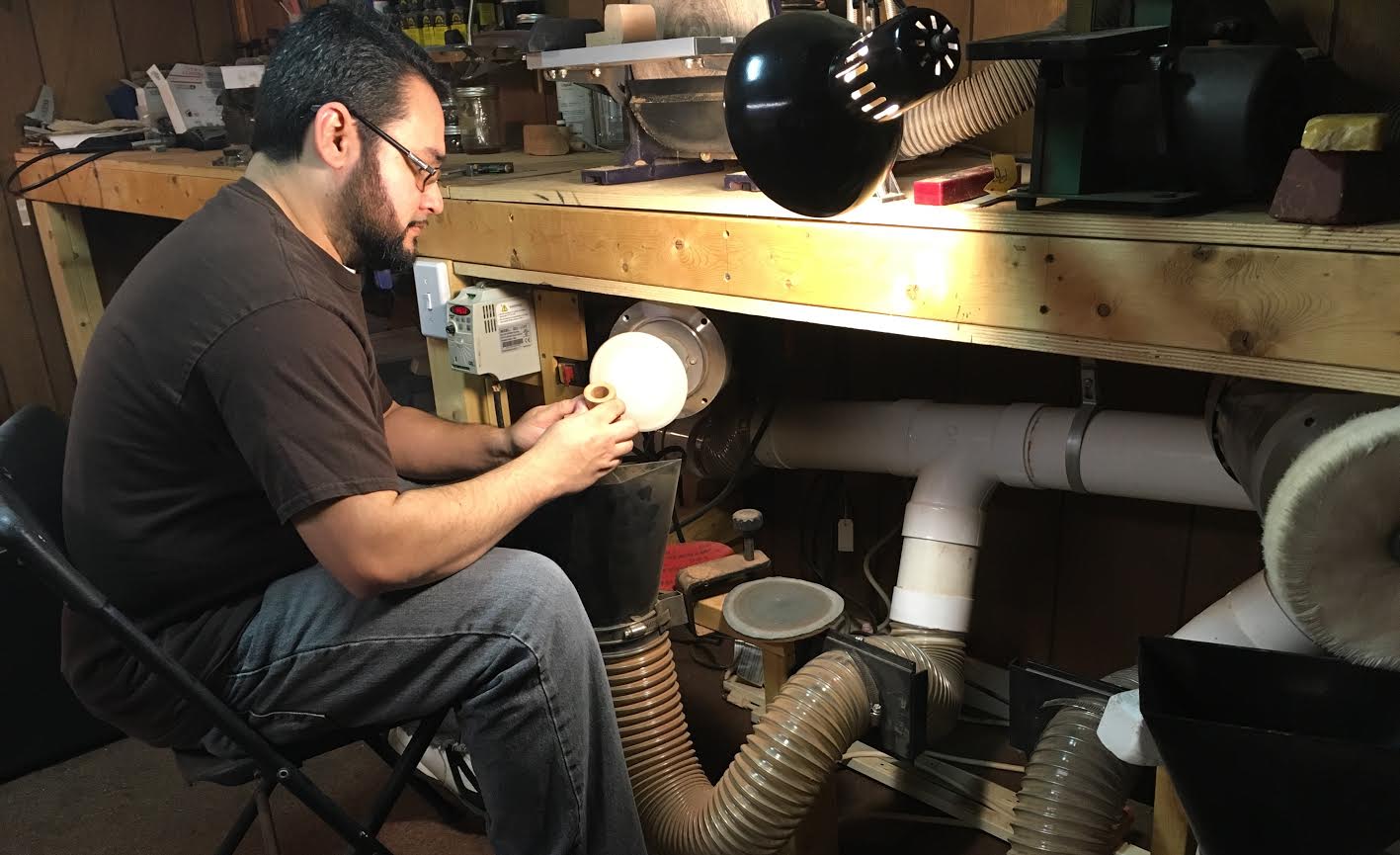 Renia: Would you say Gainey was a big influence on you? What other carvers and/or artist influence your work?

JP: Definately. He’s my favorite artisan. His stem work is particularly noteworthy. I feel honored to be working with his equipment and feel like we lost a lot in the pipe world when he quit making pipes.

Grant Batson is another one that comes to mind. I really like his work.

Renia: Do you have a mentor/teacher or are you self-taught?

JP: I’ll occasionally talk to someone in a forum and I’ve watched a few YouTube videos. That’s about it. I’ve never worked with someone directly.

Renia: So you’ve had to figure it out mostly on your own. What does that process look like? Are you spontaneous or a planner, when it comes to your work?

JP: I am a planner all the way. I draw out the pipe first. Then, I’ll measure it out on the block to make sure it fits. Then I drill and go from there.

Almost all my pipes are Pokers and Dukes, but Bulldogs are actually my favorite. I’m playing with making those, but they are tough.

Renia: Do you work on a batch of pipes all at once, or do you make them one at a time?

JP: Usually one at a time. I’ve worked in batches in a crunch, but I like the sense of accomplishment to see something through from start to finish before I move on. 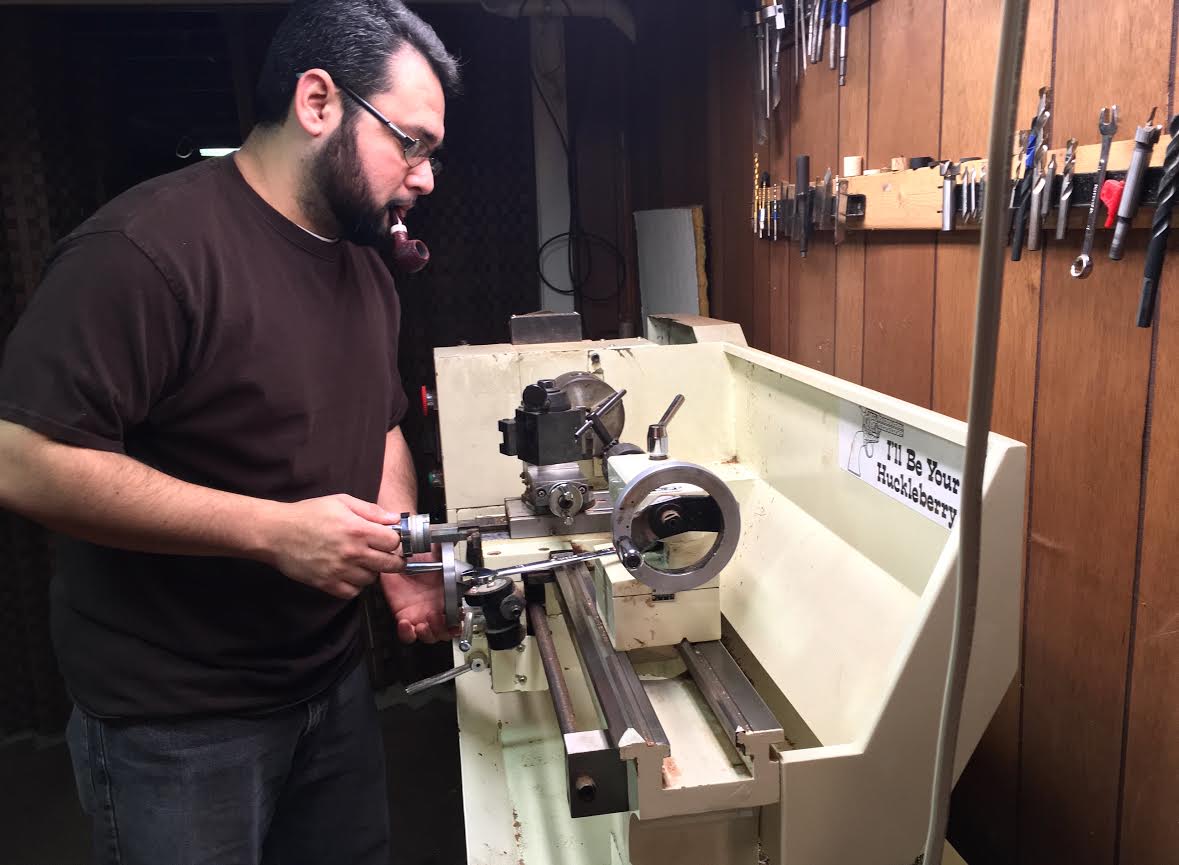 Renia: Where is your workshop and what rituals do you have while you work?

JP: I’m not sure I have any rituals, other than drawing out the pipe. But I work almost entirely in my basement.

The blaster and the compressor are in the shed, because I couldn’t figure out how to carry them down into the basement. Everything else is down there. It was supposed to be my man cave, but ended up a workshop instead.

Renia: What’s the most frustrating thing about making pipes?

JP: Frustration? Hmmm...I don’t really get frustrated. Making pipes is a lot of fun. I guess it’s like any other pipe maker, the most frustrating thing is when you are almost finished with a pipe and you find a flaw or a problem in the briar. In the last month I’ve come across maybe 10 pipes I was working on that had a flaw, the starting over isn’t great. But it’s all experience right?

Renia: What do you want your customers to know about your work that maybe you don’t always get the chance to tell them?

JP: Most people don’t know what goes into making a handmade pipe. It’s a lot of work. Don’t get me wrong though, we love the work. Buying an artisan pipe is a different experience than buying a production pipe. There’s a lot of heart and hardwork in what we do.

I don’t put out a pipe with a flaw either. If you’re buying a J.P. Urquiza Pipe, my name is on it and it will be as close to perfect as I can make it.

I just want to put the best work I can out into the world.

Leave a comment to welcome J.P. to the TobaccoPipes.com family. We are honored to have his handmade pipes on our site.