The thing you have to understand about Jayson Dagner, founder and designer behind Dagner Pipes, is that he never really stops. Whether he’s out on the asphalt practicing his favorite form of meditation--skateboarding--or video chatting with his Italian manufacturers (as he was when I interrupted him for our interview), he is always, in pursuit of his goals.

Read on to learn what skateboarding and business have in common, the two rules Dagner lives by, and how he started down the rabbit hole of producing his own tobacco pipe collections.

Jayson: It started as a way to save money, because smoking cigars costs a fortune.

Of course, like many of the people you talk to, my grandfather and father smoked a pipe. I smoked a corn cob when I was around 18, but smoking a pipe started with YouTube videos as an alternative to the cigars that were draining my bank account, back when I was racing motocross.

Pipes appeal to me because they last. Once you smoke a cigar, it’s gone. There’s maybe a memory, if it’s a particularly good one, but that’s it. A good pipe, on the other hand, will be a companion--even an heirloom--the sense of history was something that really drew me in.

Renia: What motivated you to start creating your own line? How did you get started?

Jayson: I like figuring out how to make things work and spent a lot of time messing with the pipes to fix them up and make them smoke as optimally as possible. I pretty much do this with everything.

Around the same time that I started thinking seriously about making some pipes of my own, I started to think it might be a good idea to have another career options. The company I was working for went through a buy-out and lots of jobs were going by the wayside. I knew what I wanted out of a pipe and figured I could make it, but making a couple of pipes per day would mean I would need to price them pretty high to make a living doing it. Instead, I wanted to work with someone to make pipes for working guys like me, pipes that most of us can afford.

Renia: Working with a manufacturer right from the beginning is rare in the artisan world. How do you make sure you’re pipes live up to your expectations?

Jayson: Dagner pipes are not made on an assembly line exactly. I think when most of us think of manufacturing, we think of an autoplant or something. Every one of my pipes are designed by me and each piece of the pipe is custom made for that pipe.

The first time I worked with the Italian company that makes my pipes, it took nearly eight months of going back and forth. It took awhile for us to learn to work as partners and to get things exactly how I wanted them. Now the methodology is, “Measure twice, drill once.”

Every one of my pipes is inspected and if it doesn’t meet my standards, it doesn’t get sold.

Renia: That’s a lot of drill holes to check! So what do you think makes a good pipe?

Jayson: What makes a pipe smoke well is all about the aesthetics of flow. If the tenon is flat, then it’s going to change the direction of the airflow and cause moisture to pool in the bowl. Specific drilling is essential to a good smoking experience.

When it comes to pipes--no, scratch that, when it comes to anything--the little things matter. I learned that from skateboarding and it applies to everything.

Renia: Your experiences as a skateboarder have a big impact on your brand. How do you think that 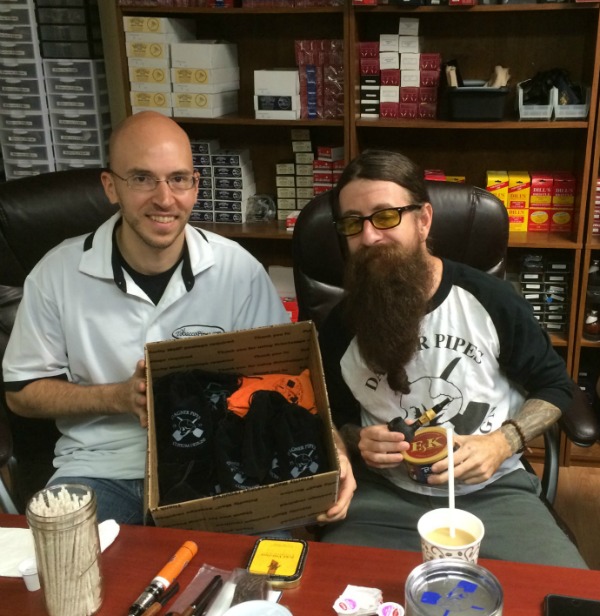 unique perspective influences your role in the pipe world?

Jayson: There’s tons of cross-pollination. Pretty much everything I’ve ever learned about life came from skateboarding. Skateboarding taught me that everything counts.

That 7-ply board taught me how to meditate, and how to notice the little things that add up to big things. You have to be one with the board and notice the tiny movements that are the difference between flying and failing.

I’ll go to the park knowing what tricks I’m going to do, and somedays are good. Other days I’ve got to do the same thing a dozen times to get it right. So much of the time it’s just a little lean in my body that’s the difference. Skateboarding taught me patience and precession, which are absolute musts if you’re going to make pipes. I don’t care if they are handmade, machine made, or whatever.

Even bigger than tobacco pipes, skateboarding forces me out of my head where I have to face the fear and commit completely. You need that in business...hell, you need that in life. Once you’ve committed you start to be able to see what’s going to happen--to anticipate--maybe just two or three seconds early, but that’s all you need. It allows you to make the right move without even thinking.

If I’d quit skateboarding when I was young, I might have ended up in jail. Instead, I ended up with a couple rules about life that serve me pretty well in and out of the pipe world. First, never lie...not to other people and not to yourself. Second, don’t be an asshole. Being nice is really underrated.

I didn’t skateboard for 10 years, from 2001 to 2011, but every single day I thought about it. When I recovered enough from my accident to get at it again, I had to learn different ways and what my limitations are. That’s good for us too--understanding our limits and choosing whether to stay or push a little farther. There’s a big difference between making a choice to only go so far and quitting because you’re afraid.

Renia: It sounds like you learned a lot from skateboarding, both at the beginning of your life and more 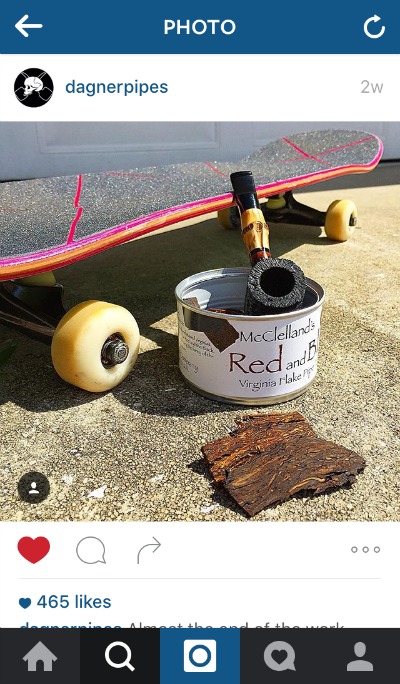 recently, the perspective is a little different on either side. How has the way you view pipe smoking changed over time? What about your tastes?

Jayson: Well, I can’t 50/50 grind down a ten stair handrail anymore, but I can use those old tricks to come up with a new way of doing things.

In the beginning it’s all about the new stuff, and learning about the different pipe tobaccos. Today, I use my own smoking time more as a time to focus. It’s less about learning new tricks and more about thinking up new ways to make the experience better for more people. I’ve filled more notebooks than I can easily count while I’m enjoying a smoke. Today, one of those old ideas came back around again and we’re starting to work towards doing it.

Renia: What does your process look like when you’re working on design ideas?

Jayson: I watch everything and I hear everything.

Most of what we do with Dagner Pipes starts four to six months before we actually make anything. It allows me to be really clear about the resources we will need and what the future is going to look like. Again, skateboarding taught me about this. You’ve got to balance looking down the road with paying attention to what you’re doing today.

Design ideas can come from anywhere. It’s hard for me to pin down where a particular thing comes from, most of the time.

Renia: You are original in many ways and you said that you notice everything. Who influences your work, whom do you go to for advice?

Jayson: Hmmm...Tom Eltang has helped me, both as a businessman and as a pipe maker. Joe Case and Paul Menard are both excellent pipe makers and good friends. Really, I sort of owe it all to Salam (aka One Man Smokes). It was his YouTube videos that I first stumbled on. I wouldn’t be here today if I never made any videos and I made videos because of seeing Salam do it. 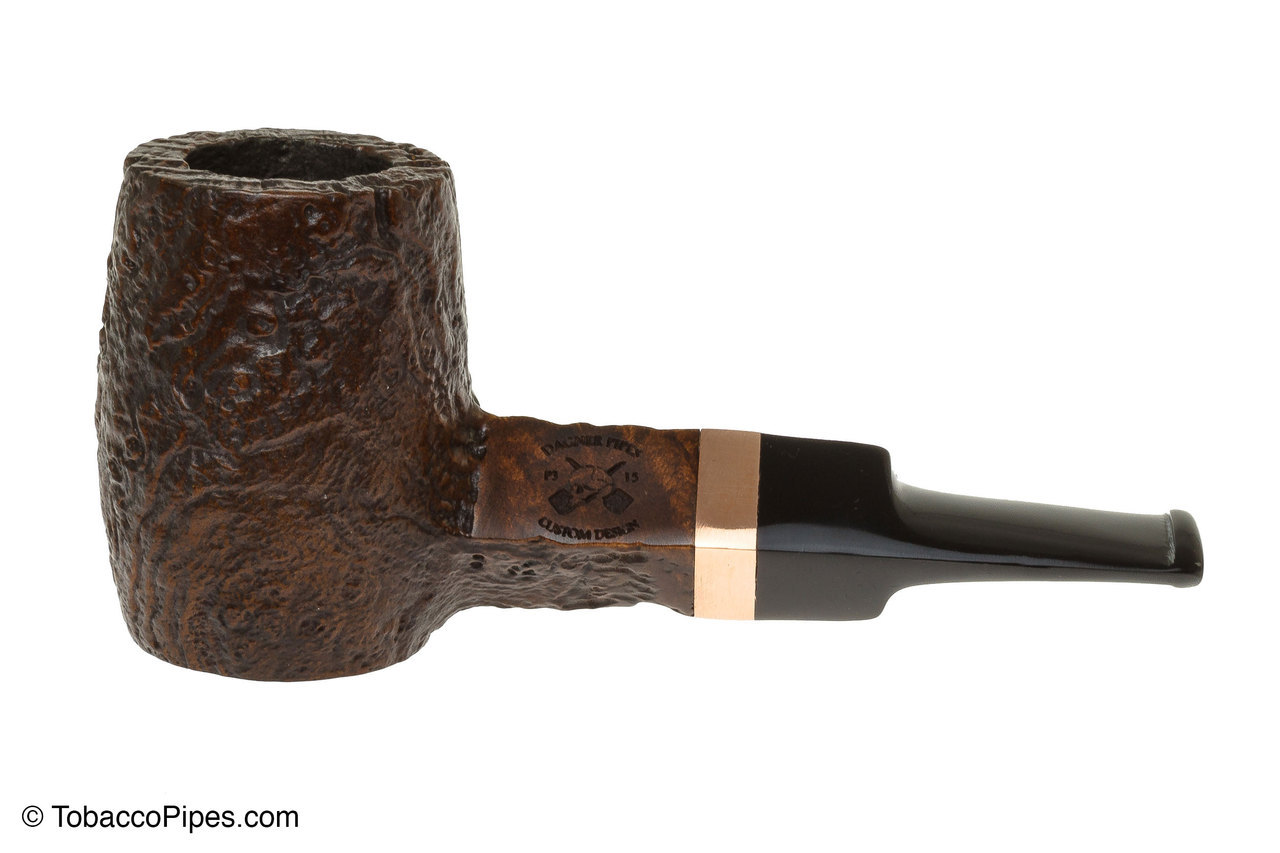 Renia: Those guys are awesome. What about your pipes? You have a huge collection of pipes. Do you

Jayson: I have a Parker that is always in my truck. It’s a Dunhill second, a little light Dublin, that I bought from Glenn Quelch. I probably smoke that thing more than anything.

I have a pipe rack by my desk that hold 12 pipes. Every Sunday I go to my cabinet and pick out 12 pipes I think I might like to smoke for the week and put them on that rack. That’s how I make sure most things get a chance to come out once in awhile.

As far as the Dagner Pipes go, I reach for the Blue Collar Poker a lot. The one I smoke is a prototype. I love it because it’s a beginning, you know? The Whiskey Barrel also comes out a lot. Those two sit on the table by my desk.

Renia: What do you want your customers to know about your work that you don’t always get to tell them?

Jayson: Just how much work goes into or pipes. When you smoke a Dagner Pipe, it’s always going to smoke well.

Renia: Thank you for taking a break from your day to share with me. It’s been a pleasure.

We are honored to offer Dagner Pipes at TobaccoPipes.com.