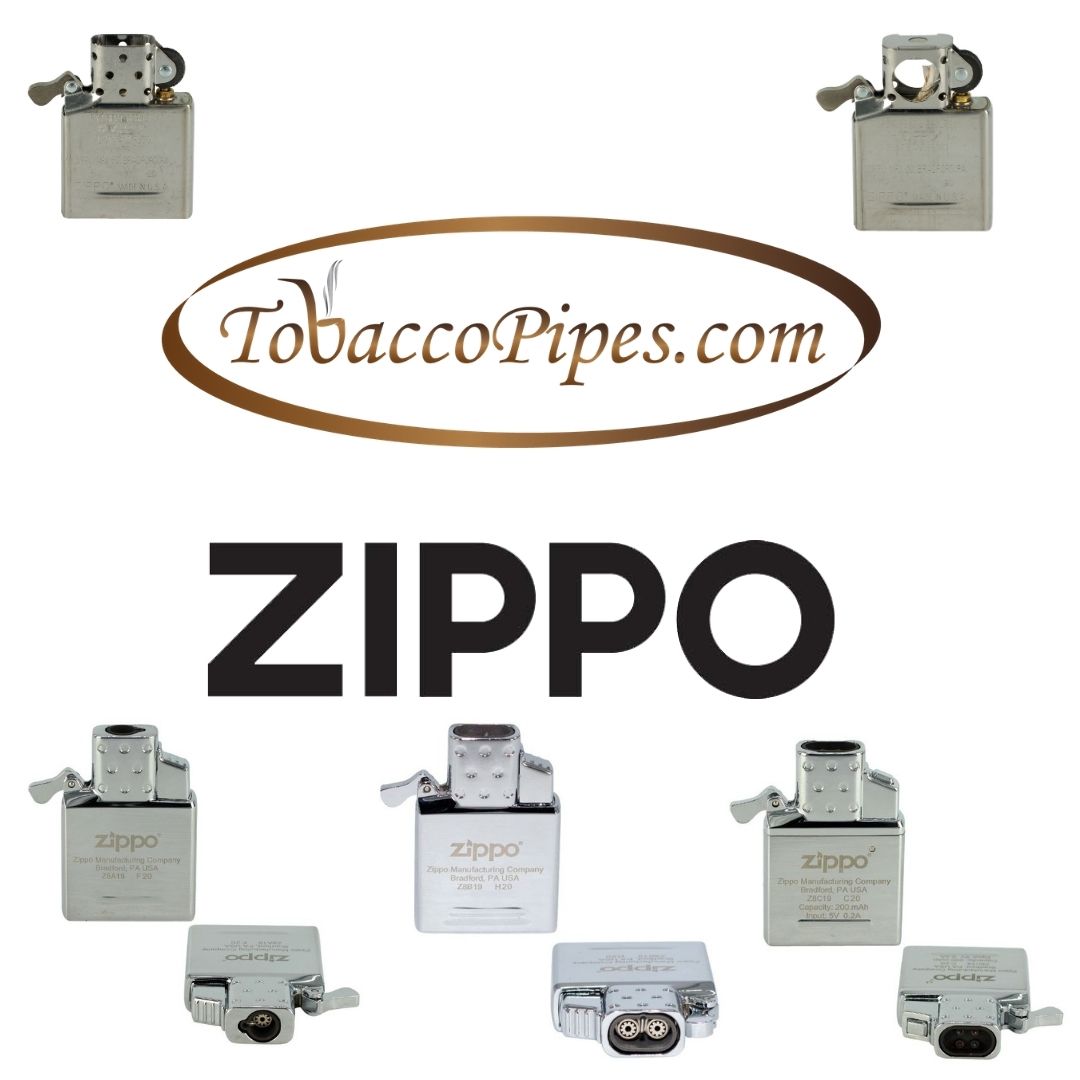 Zippo has been the number one name in lighters pretty much since George G. Blaisdell developed the first of their lighters in the early 1930’s.

According to popular stories, Blaisdell decided to make an attempt at improving lighters based on the design of Austrian lighters that were popular at the time. The chimney design was very useful in protecting the flame, and it would work well despite any winds fighting it. However, that was the only positive to the Austrian design, as Blaisdell noted that the lighter was difficult to use, required both hands, and was easily damaged and dented.

So Blaisdell decided to take his own approach, on the idea that a person should only need to use one hand to work their lighter. He made a small, rectangular case with a hinge to serve as a snuffer cap, while also protecting the wick and fuel when not in use. A little shrinking of the model and you got a comfortable, practical lighter that anyone can use with only one hand. Legend has it that Blaisdell got the name for the product because he liked the word “zipper” and decided that “Zippo” had a modern sound to it.

Adding his now famous lifetime guarantee, which the company still holds to, and we now have an Iconic American business and product.

While the decorative aspects of Zippo have taken almost a life of their own, the basic design for the Zippo lighters have not changed much since they were originally made. Colorful and intricate cases they may be, but at its heart, a Zippo is still a rectangular case that houses a lighting component with space for fuel.

That inside component used to be simple and old school, but Zippo has undergone a number of amazing improvements that keep their lighters at the top tier of lighters in the world. Right now, Zippo has five different inserts for their lighters that will allow you to further add to your customization choices. 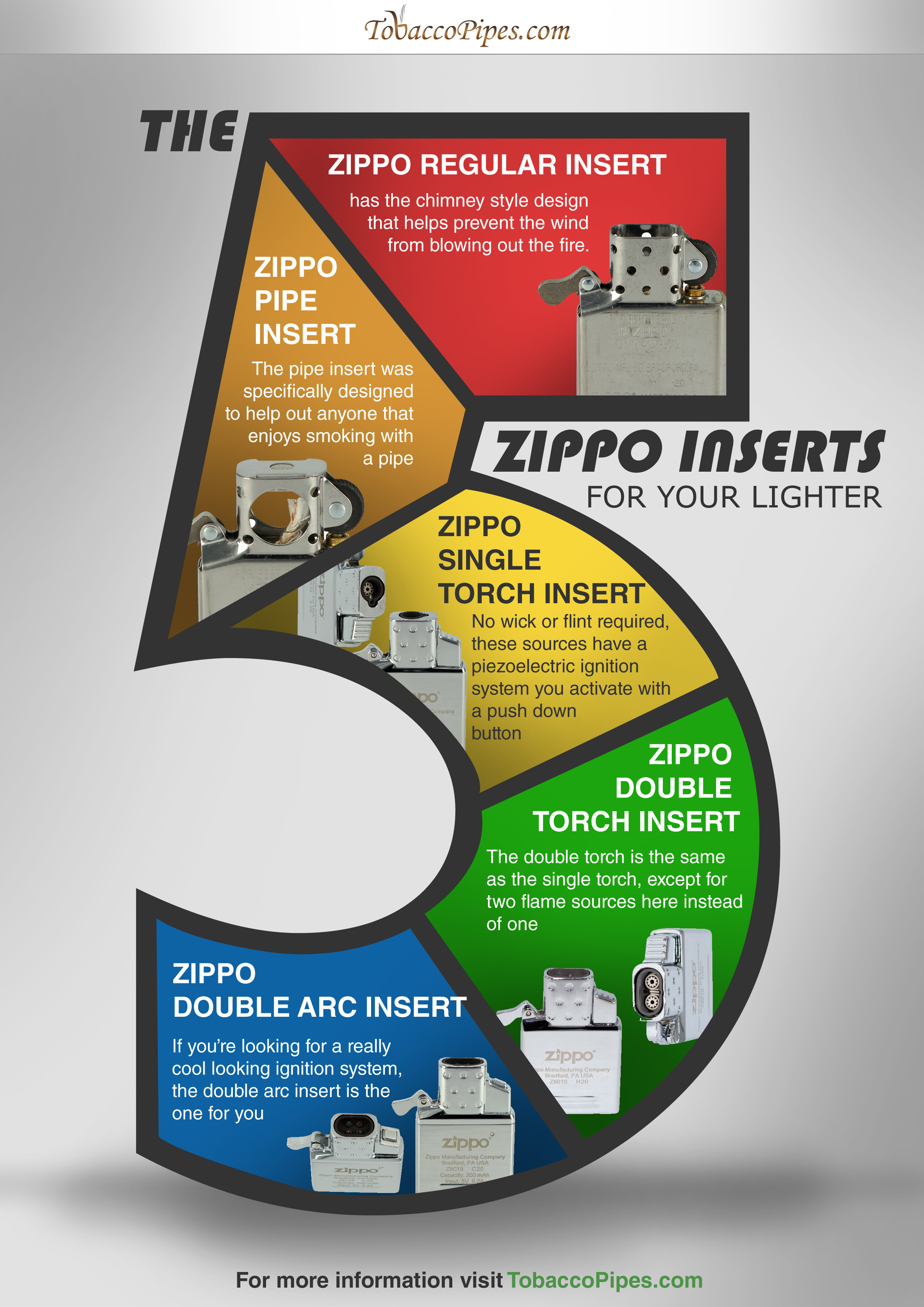 The Zippo classic original insert still has the chimney style design that helps prevent the wind from blowing out the fire. The lighter uses a traditional Zippo wick and lighter fluid, along with the original flint and wheel design. Zippo provides their own lighter fluid, one they claim will make the lighter work best and they say has a minimal odor to it. 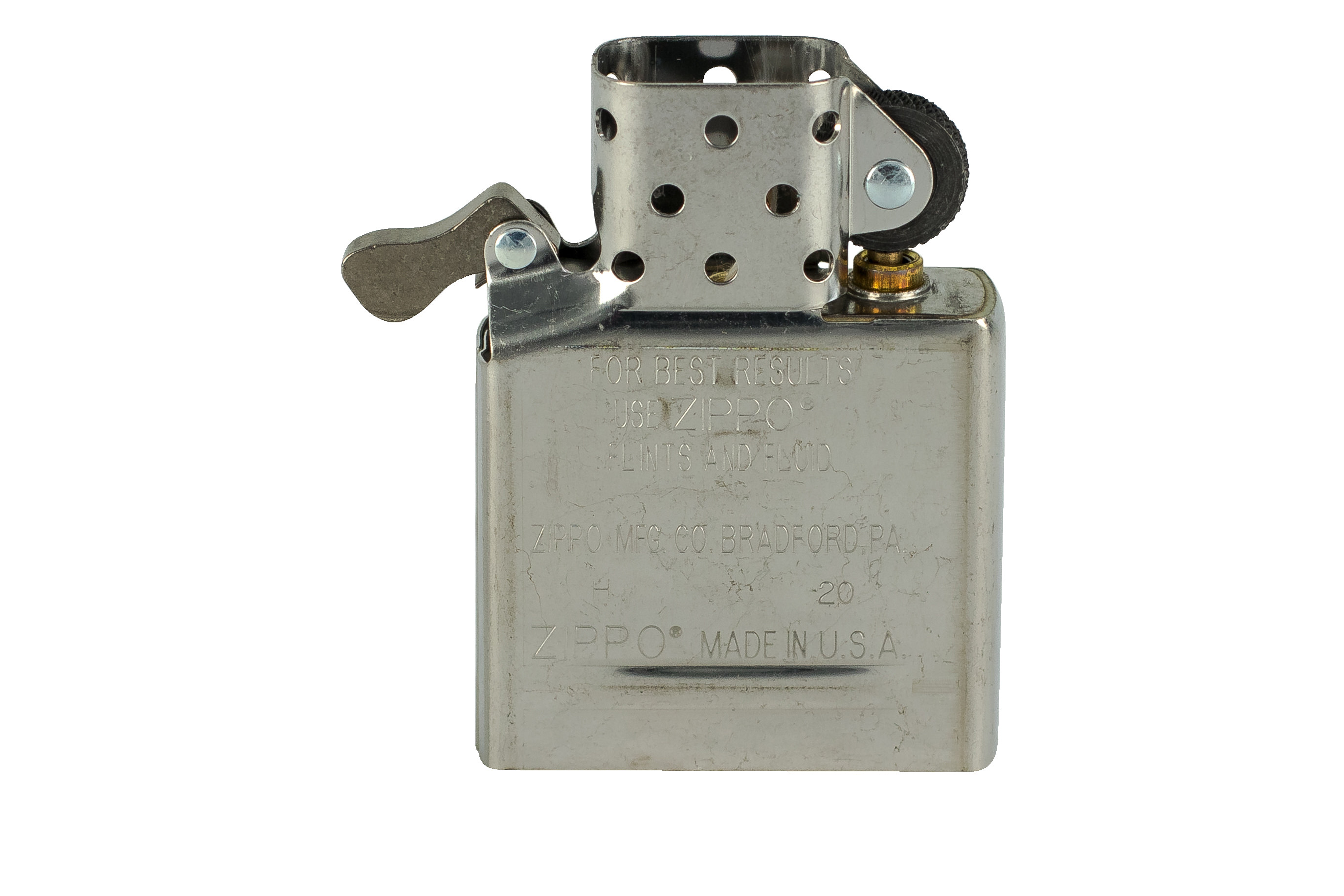 The pipe insert was specifically designed to help out anyone that enjoys smoking with a pipe. Using the same fuel as the original design, this insert was made differently, with a hole in the side of the chimney design that will allow users to more easily direct the flame down to the tobacco in the pipe. This helps users light and enjoy their tobacco but not do any damage to the pipe itself. 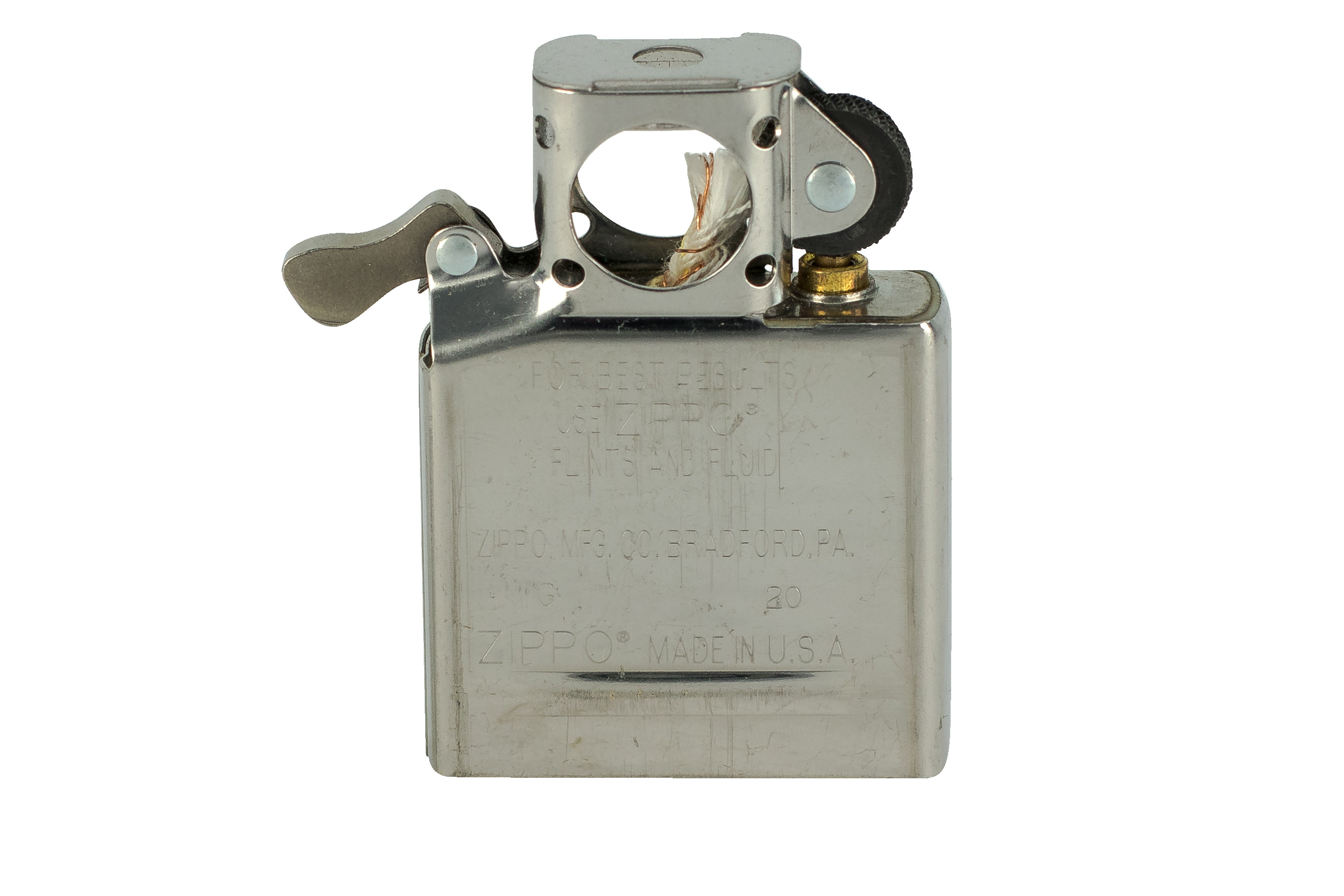 For years, cigar smokers have avoided Zippos like the plague. The lighter fuel used in the traditional Zippo was said to ruin the flavor of a cigar, rendering the lighter practically useless for anyone that wanted to enjoy their smoking experience. The company now has a fix for that issue with the butane fueled single and double torch inserts. No wick or flint required, these sources have a piezoelectric ignition system you activate with a push down button at the top of the insert which will get you a hot flame that you can adjust as needed. These flames get incredibly hot, the Zippo website claims they can reach over 2,300 degrees Fahrenheit. This temperature and odorless fuel combination make the single or double torch inserts the perfect options for cigar aficionados. So there should be no doubt that a single or double torch can light just about anything you need it to. 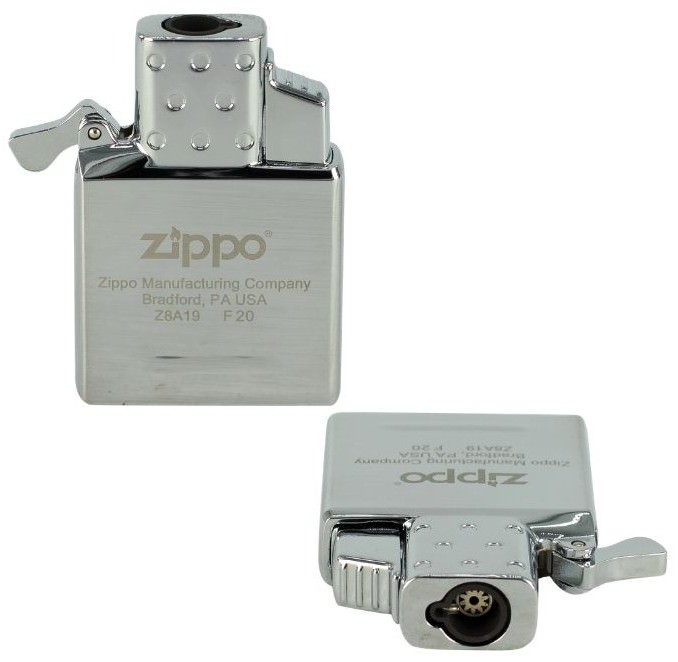 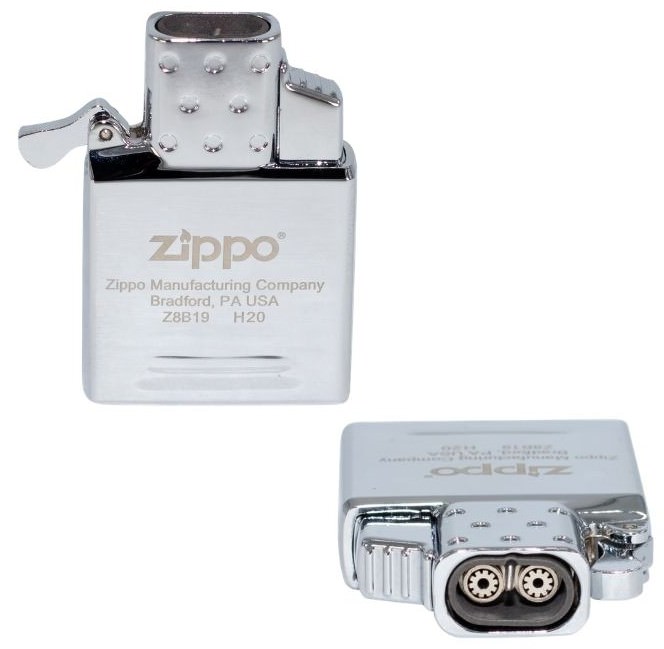 If you’re looking for a really cool looking ignition system, the double arc insert is the one for you. However, if you want something that will easily light your cigars or pipes, this insert is not for you. Using electricity to create a lighting source, the X-shaped flame is actually two plasma beams crossing each other. These beams do not reach out far, so if you want to light something, it needs to be very close to the lighter, in order to touch the beam. Still, this is the cleanest of the inserts, as you don’t need to fuel it with anything. Simply plug the insert in and allow it to charge, Zippo claims it will be fully charged in one hour. Good to light smaller objects that can easily reach the beams, the double arc is probably not going to be the choice of cigar or pipe smokers. 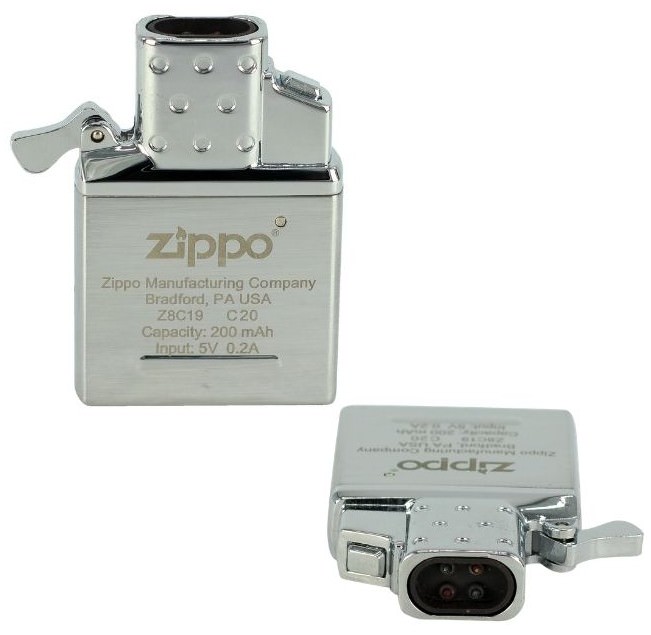