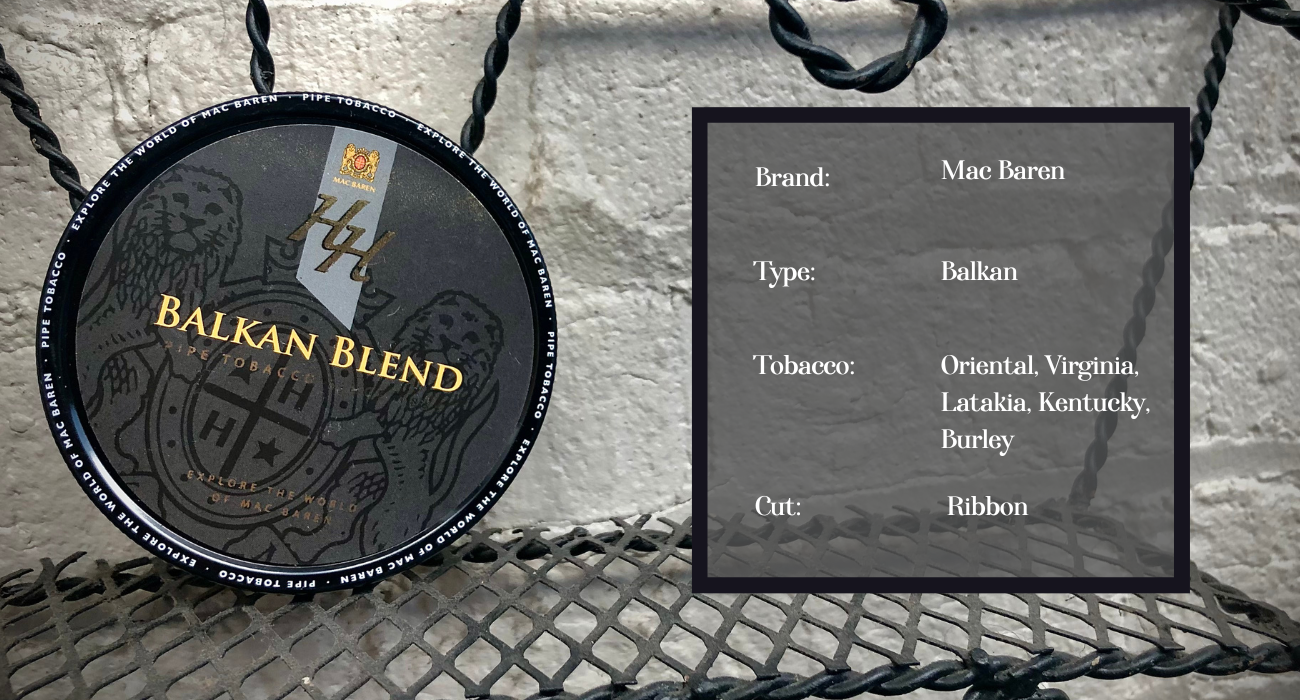 I was quite surprised to realize that I haven't done a single Mac Baren blend for this column. There have been several Mac Baren manufactured blends—Presbyterian, Amphora Burley, Capstan Original Navy Flake—but not a one from the brand itself. This had to be corrected, and I thought it a great opportunity to dive into a mixture from the fabled Mac Baren brand that I've not yet experienced.

I've also gone the last two columns without any of that smoky stuff. What can I say, the heat has finally graced Richmond, Virginia and when I'm schvitzing on a rock with my feet in the James River, a Virginia blend feels right. But Redwood will satiate that just fine, so Mac Baren's HH Balkan Blend it is for our first smoke!

Upon opening the tin, it's quintessential English topped with more English, an absolutely smoky, campfire aroma. A bit musky and leans to the BBQ side.

HH Balkan is consists of long, blonde cuts among smaller sliced ribbons. If you prefer things on the dry side, you can give it some time to sit, but it comes with an agreeable, light moisture.

I pack it up in the newest addition to the collection, my Vauen New York 3428N. 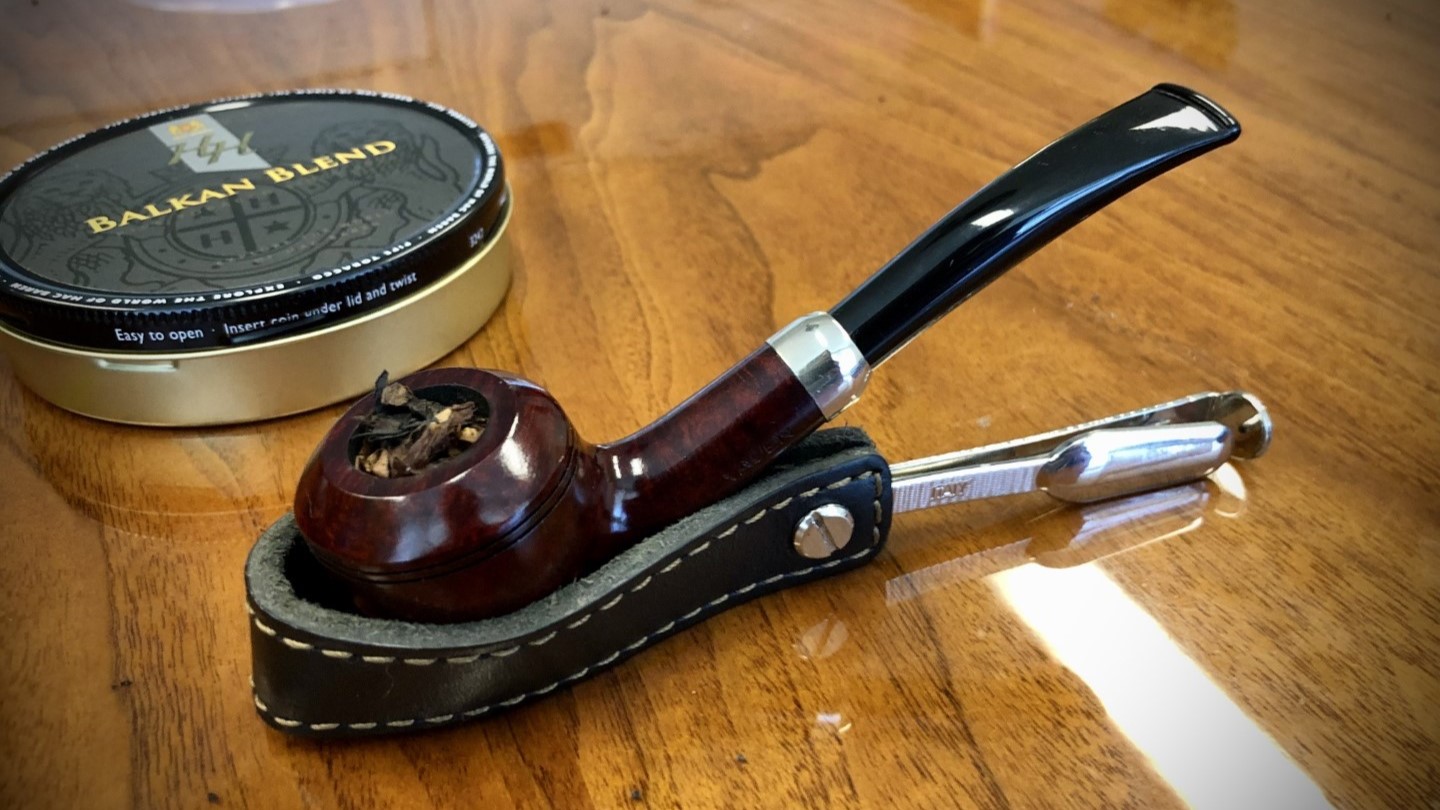 The pack is somewhat cumbersome with the long strands in this quite small chamber, but with a little finesse and attention, we’re ready to go.

At the jump, HH Balkan Blend is woodsy and buttery sweet with the Latakia up front, but the smoky varietal isn’t the whole story. Herbal Orientals with a light spice back it up not far behind. Noticeable citrus and hay from the Virginias wades beneath.

Orientals begin to come even more forward, in tandem with the Latakia now—the Virginia still featuring enough to find an emergent tanginess between them and the Orientals.

Deeper into the bowl some of that buttery sweetness returns to a higher resolution, then a little more BBQ rearing its head to end things.

I can tell already there’s a complexity to this blend that I don’t think I’m getting the most from in this small bowl. My next bowl will certainly be in something larger. Right now, HH Balkan is an orca in a fish bowl. It’s got nothing to sing for. But you can tell it wants to.

Although I expect a little more from the mixture in a larger bowl, that isn’t to say it wasn’t an enjoyable smoke. In fact, I think it says something when you can tell there’s a complexity that isn’t fully realized.

As I’ve continued to smoke HH Balkan blend, I’ve tried to make more of a point to suss out the American expats in the English blend, Burley and Dark Fired Kentucky. I struggle to recognize the Kentucky in any isolated note, but no doubt it could be augmenting the Latakia flavor with its own brand of fire-cured smokiness. 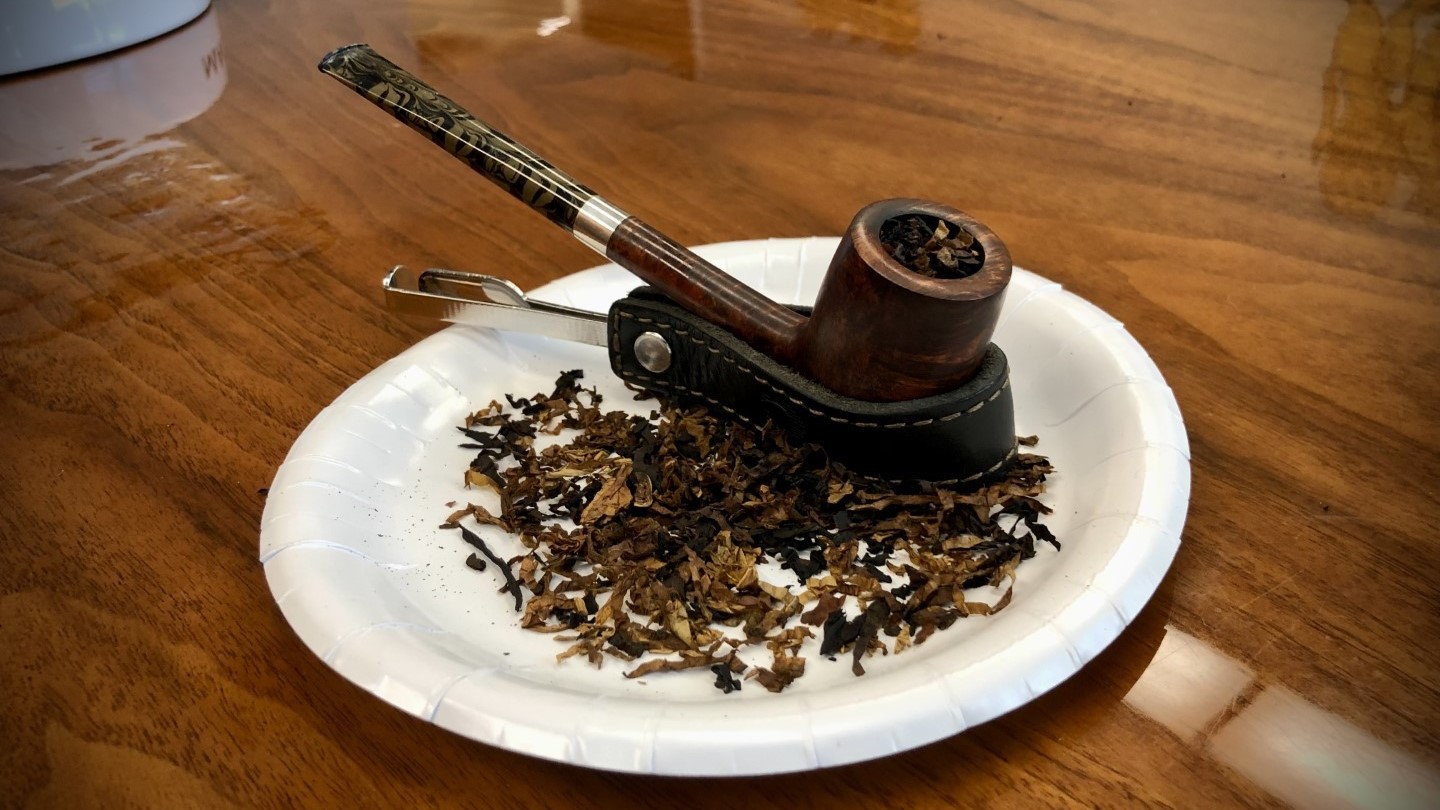 I wasn't picking Burley out of the profile during my first few smokes, I assumed its role was in bolstering body and strength, but my last smoke in my Bruno Nuttens Heritage II had a Burley presence I was pretty excited about. I believe I've mentioned my Burley blind spot in previous columns. Which is just to say, Burley is subtle and elusive when not the substantial base of a blend, and my palate struggles to distinguish its flavor contribution to busier, less Burley-centric mixtures. Though I'd very much like it to.

In the Nuttens pipe however, a low, nutty, buttery flavor playing so nicely around Virginia citrus and Oriental tea and floral notes really spoke to the balance and complexity of HH Balkan Blend.

The Virginias seem very much on the bright side. I don't notice much of the dark, fermented fruit, or toasty notes associated with Red Virginias. I love my Red Virginias, but I think it suits this blend quite well. I like the way the plummy Virginia notes can mesh with the Latakia smokiness in other English blends, but there's something a bit more stratified about this that gives the smoky, woody Latakia the prominence you'd expect from such a blend without seeming overstated or devoid of nuance. 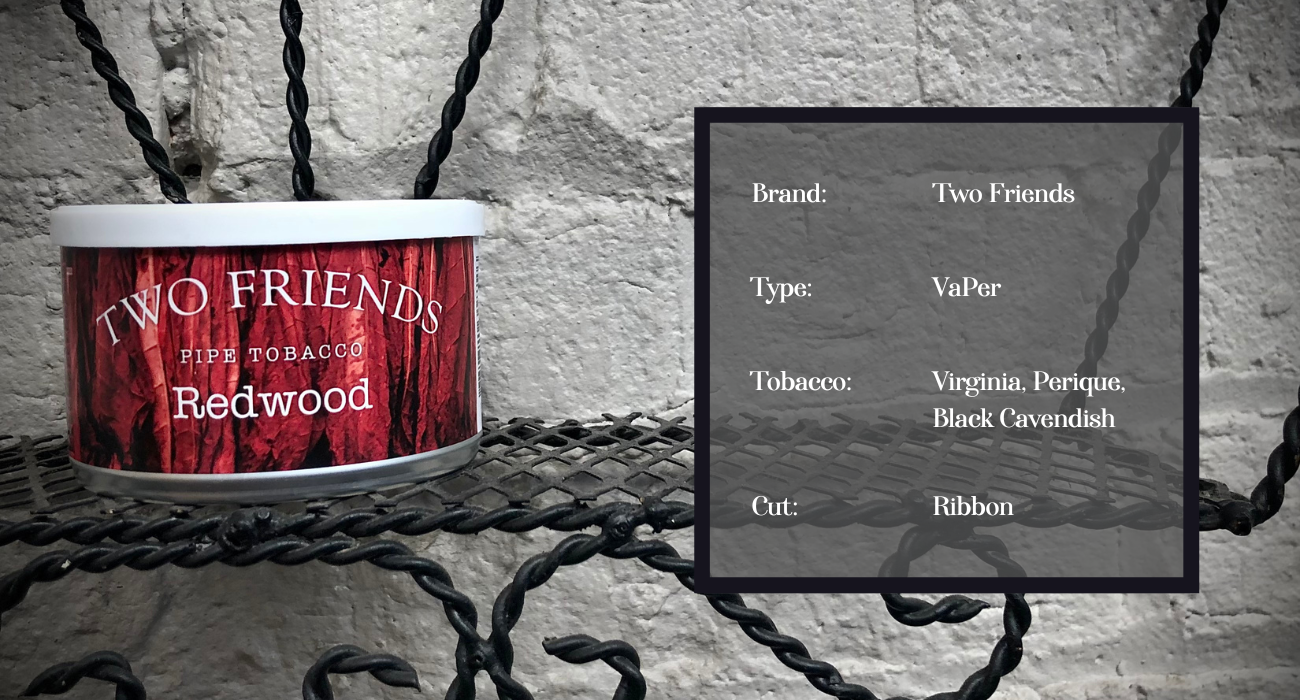 Redwood will be my first blend from Two Friends, the collaborative brand from two blending greats, G. L. Pease and the late Craig Tarler of Cornell & Diehl fame. Some of my favorite blends are from these artists’ solo productions, so it’s any wonder why I haven’t gotten around to this super group sooner but there’s no time like the present.

Soft ribbons that are quite finely cut. Seems almost equal parts light brown leaf and dark reddish ribbons with a scattering of Black Cavendish. Spongey to the pinch, the moisture at the point of opening is much like Balkan Blend—depends on your preference but many will find it perfectly suitable to pack right away.

The tin note is woodsy, true to the name, with a cedar, incense-y aroma. A light, mellow sweetness as well. I pack up my trusty little Chacom Star. I don’t believe I’ve featured this guy since the very first Tobacco File (or, the column formerly known as What I Smoked This Week).

Immediate dark sweetness from Red Virginias is supported by Bright Virginia citrus, lemon-y grass notes. Somewhat woodsy with a light spice. The Perique isn’t too hidden, but its presence is minor. I don’t know that the Black Cavendish is offering a lot in flavor but I assume it deserves credit for the creamy smoke. It likely also has some relevance to the natural sweetness of the blend in tandem with the Virginias and some Perique plumy-ness. 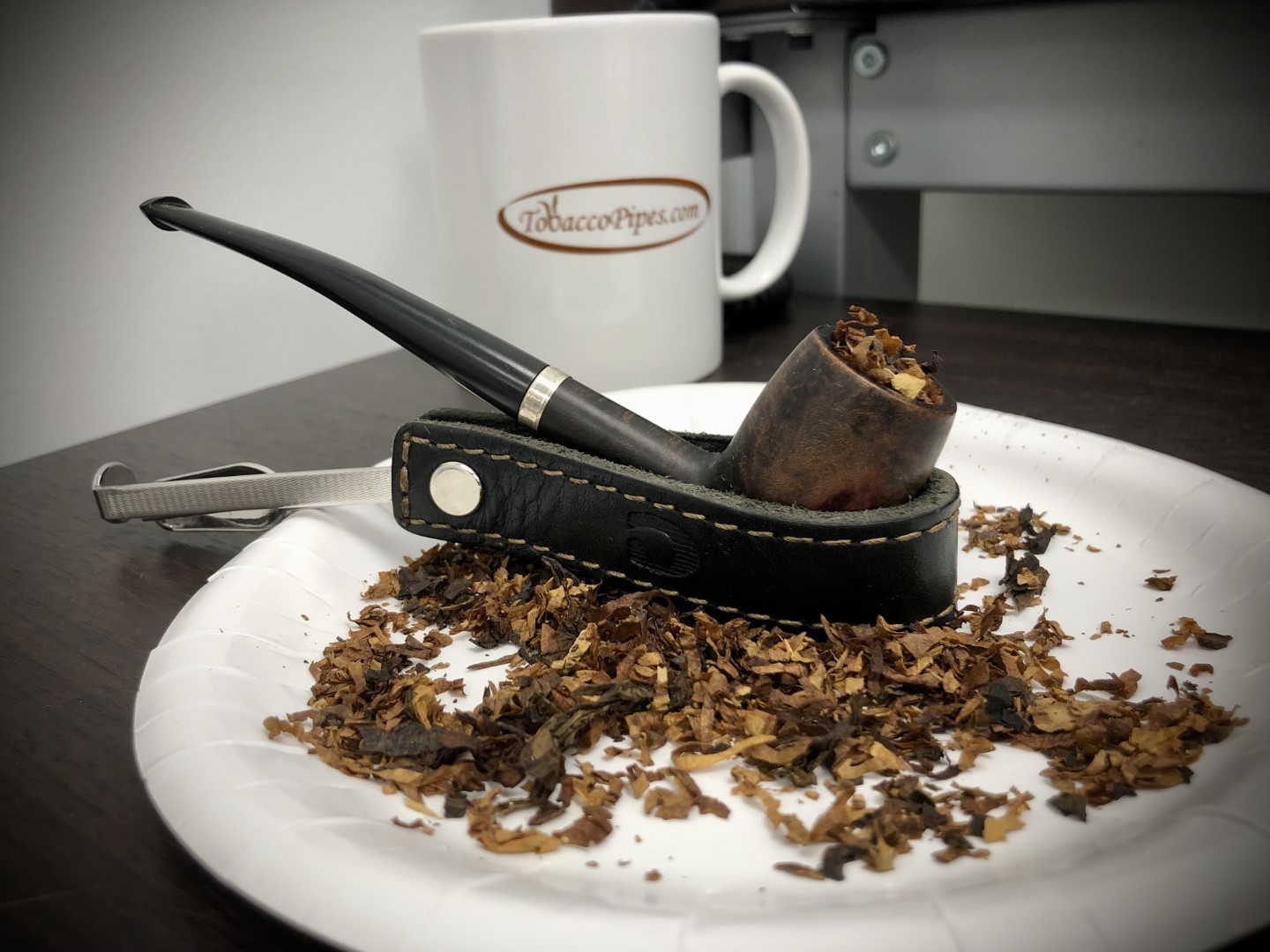 It’s certainly a sweet blend but enough on the dark side with plum, fig, and wood that mutual compliment is paid between the sweet and earthy sides of the profile. Leaving the first third or so, Perique spice ascends a bit, still playing a modest role. The Virginias certainly are the star of this blend.

Redwood came out the gate as a sweet, fruity, earthy, Virginia dominant VaPer – right up my street. But I contend with a loss of flavor and a little bitterness down the bowl not long after the spice came into greater resolution. However, I’m not disparaging yet. This mixture seems easily stoked, and losing that smoldering burn can lead to acridity.

Is it acridness, or acridity? Do I just want the word to behave like acid? Neither is provoking my spellcheck.

It likely doesn’t help that I have difficulty not clenching through just about the whole smoke when I’ve got such an obligingly light pipe lit. But the consistent stoking—even with the gentleness of breathing through the nose—can get a hot smoke going.

Redwood started too good for me to not believe it can stay that good. Time to figure out what makes this one sing.

I looked it up, acridness and acridity are both fine.

To be clear, I love my smaller pipes. This edition of the Files might have someone thinking "Why does this guy do this to himself? Stop with the small pipes.” I assure you it is just how things are shaking out with these two blends.

Anyway, I struggled to find the right smoking apparatus to get it right but I am pleased to say we got there.

The Tsuge E-Star 9, that was it. Sometimes I'm astounded by the versatility of that Bent Brandy, it should be my go-to pipe the second I start wrestling with a blend.

For whatever reason, a decently wide and deep chamber is just perfect for this one—for me anyway. Usually with Virginias I’m not very particular about bowl size, I might get something different out of the blend from one to another, but it’s usually complex English blends and the like that send me on a goose chase to find the right pipe.

But Redwood was well worth it. I’ve had it a few more times in other substantial bowls and it’s just a steep rise from beautiful Virginias to a full flavor, medium strength. We’ve got stewed, plummy fruit, fermented, grassy, tart notes. A toasty undertone—a real joy.

I don’t believe there’s any topping but I get this vanilla bean hint somewhere, perhaps just how these wonderful Virginias are interacting with the caramelized sweetness of the Cavendish.

There’s something all the more satisfying about a great blend you had to wrestle with a bit.

Today I’m spending some time at a friend’s apartment. He’s living it up in Philly and I’m on cat sitting duty. Today, I’m Uncle Greg. I pack my Duke of Dundee Bent Billiard with a bowl of Redwood while hanging with my favorite nephew, Steves, and head to the roof where there’s a common area with a beautiful view of the city. It’s a lovely sunny day here on the south side of the James and Redwood is just the right kind of fruity, bright, light VaPer to pull the whole picture together. 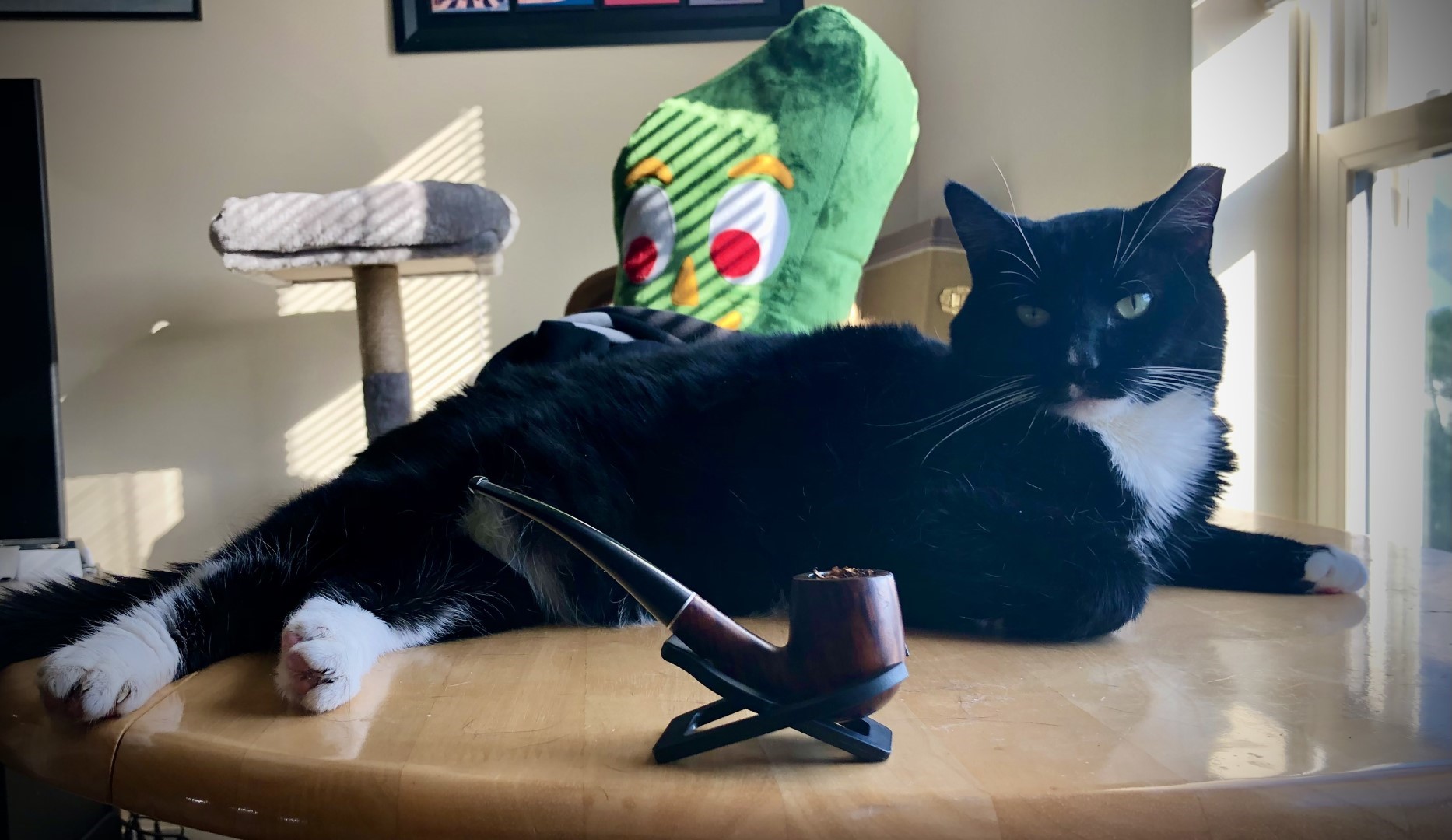 Oh yeah—Gumby was there too. I offered to pack him a cob I had but he stayed with Steves.

Yes, going forward I'll include a little bit on what I've enjoyed recently cigar-wise. Love my pipes but a good cigar is always a pleasure, and I've recently found myself frequenting them a bit more. Perhaps the greater time spent outside in these warm months.

I'll keep things brief for now and see how this section takes shape in the coming weeks and months. 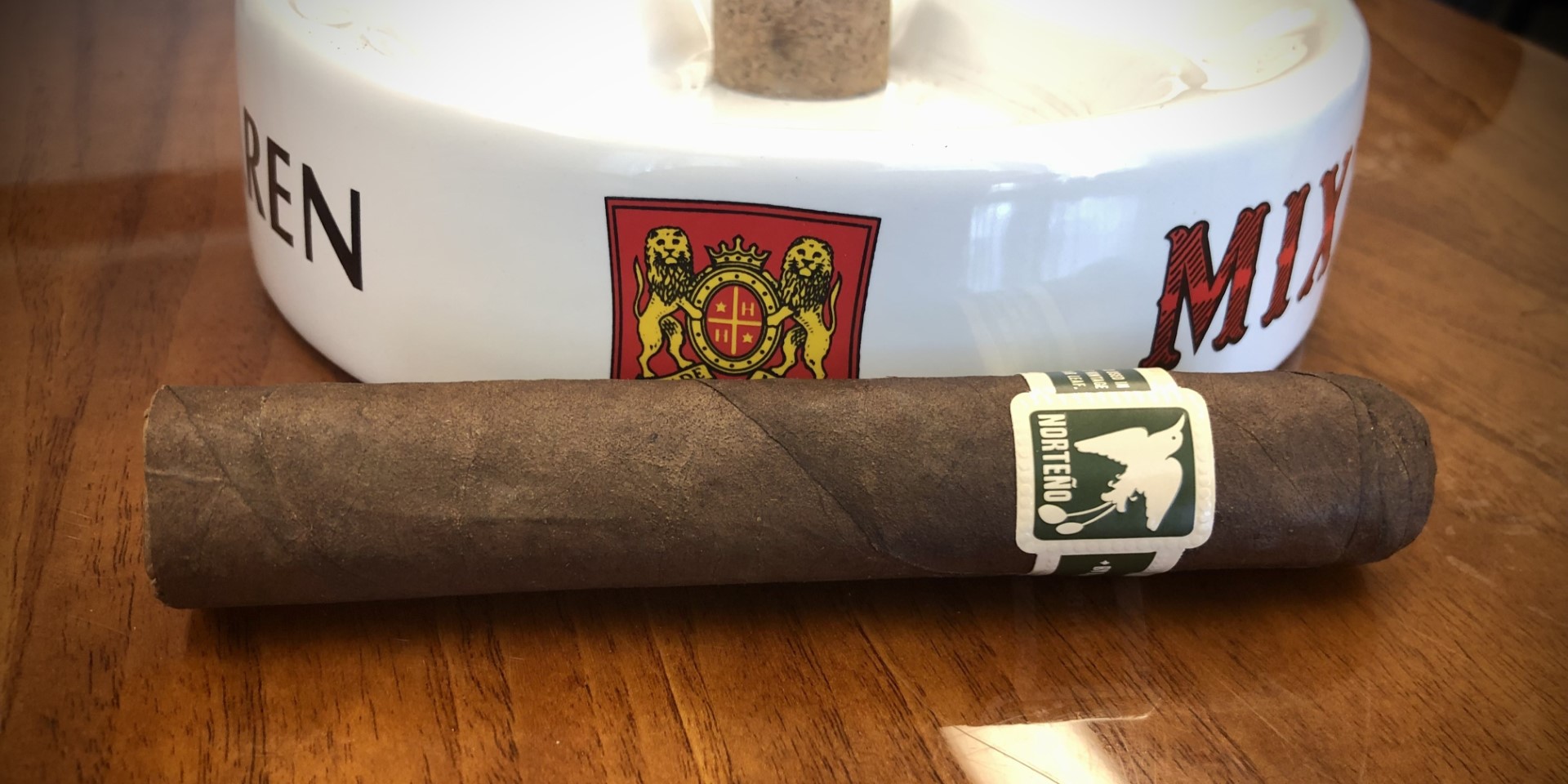 This cigar from Drew Estate's Herrera Estelí brand is one that really stood out to me recently. The Norteño Robusto Grande was rolled and box pressed in the famed La Gran Fabrica Drew Estate in Estelí, Nicaragua. Released in 2016, it quickly garnered popularity and found a sweet number 7 spot on that year's Cigar Aficionado Top 25.

The Norteño offered a great, full-bodied smoking experience—earthy, vegetative, and raisin notes are present, but it's the pepper and cocoa that define this heavy profile. Especially peppery and earthy on the retrohale, which was delightful early on, but a bit too intense for me around the middle. The last third or so saw a rise in a coffee bean note as well.

I will say, I was glad I had this one not long after lunch. I'm no stranger to bold blends, but I was certainly feeling the strength of the Norteño. 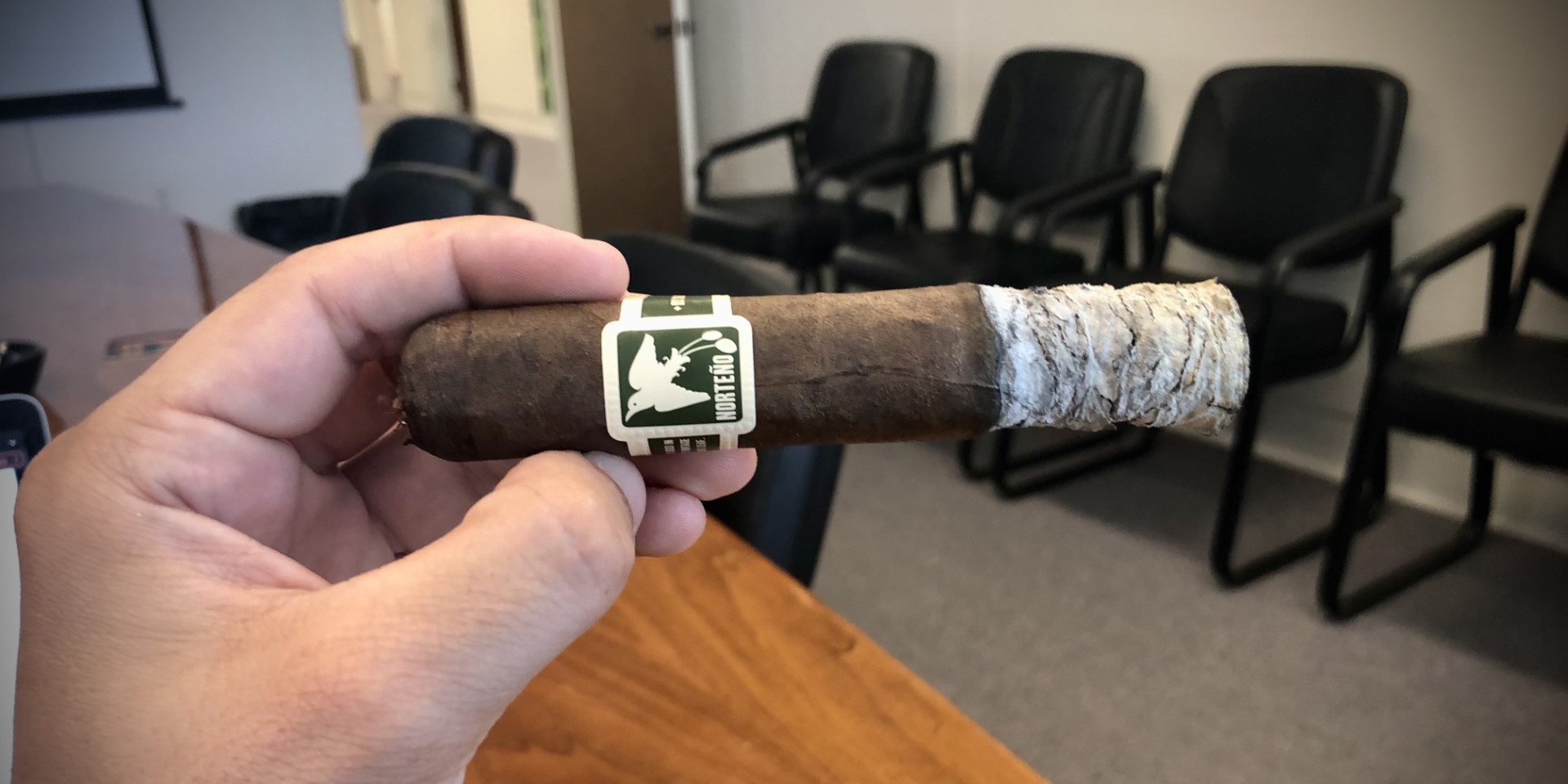 Would especially love some cigar recommendations, help me out in my exploration!

And of course, a very happy Father's Day to all those dads out there. Hope you all find the time to treat yourself to a little relaxation with that favorite pipe or cigar blend—you deserve it.