This is a Tobacco File I’ve been looking forward to—two new releases. First we have Whimsical, the second blend in the  Birds of a Feather series. Of course, this is the collaboration between Sutliff Tobacco and Mac Baren master blender Per Georg Jensen that gave us Uno with its special Katerini Perique back in May.

Then we have  Presbyterian Reformation, a classic Danish Aromatic from Mac Baren released under the infamous Presbyterian brand. 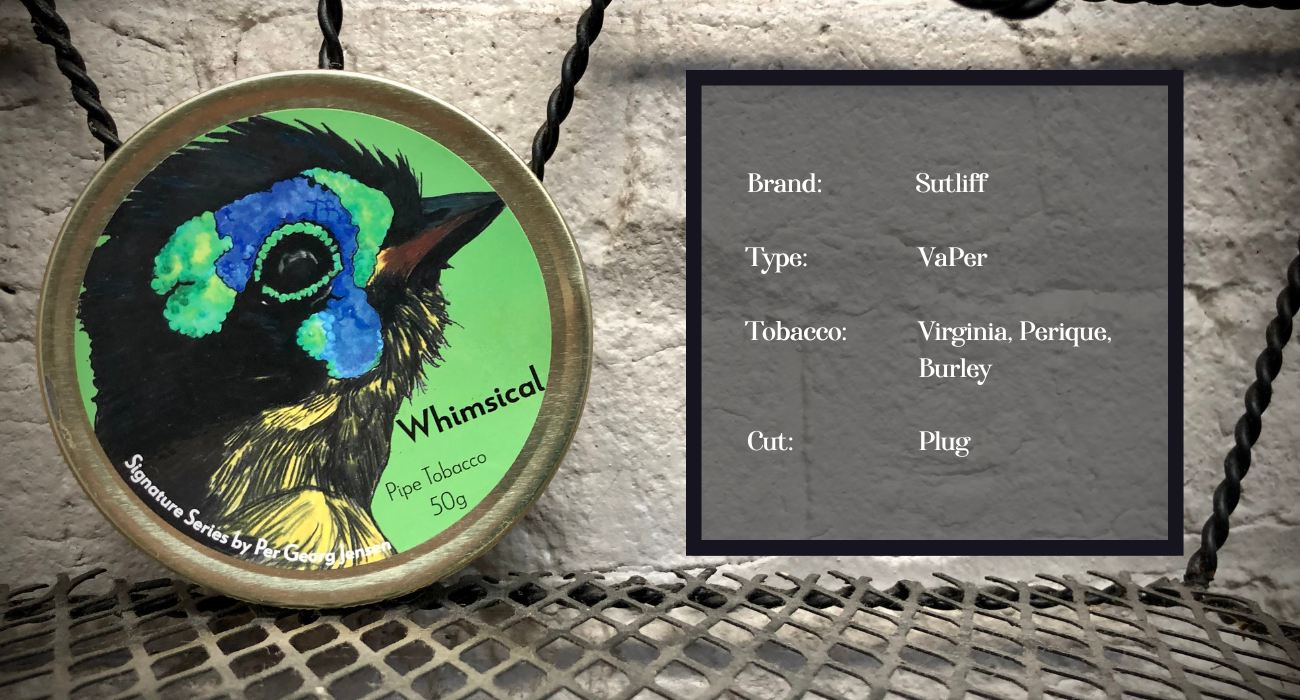 First up is Whimsical, the VaPer with genuine St. James Perique.

If you aren’t familiar or need a refresher, this series comprises six blends, each containing at least one special varietal. Uno featured both St. James Perique and the first use of Katerini Perique. I’ve been fortunate to have a bit of each of these blends on hand from when Jensen visited the Sutliff factory and crafted them, but it’s a real treat to see these tins. I think Whimsical may be my favorite art out of any of them, but they’re all just perfect for this unique series. 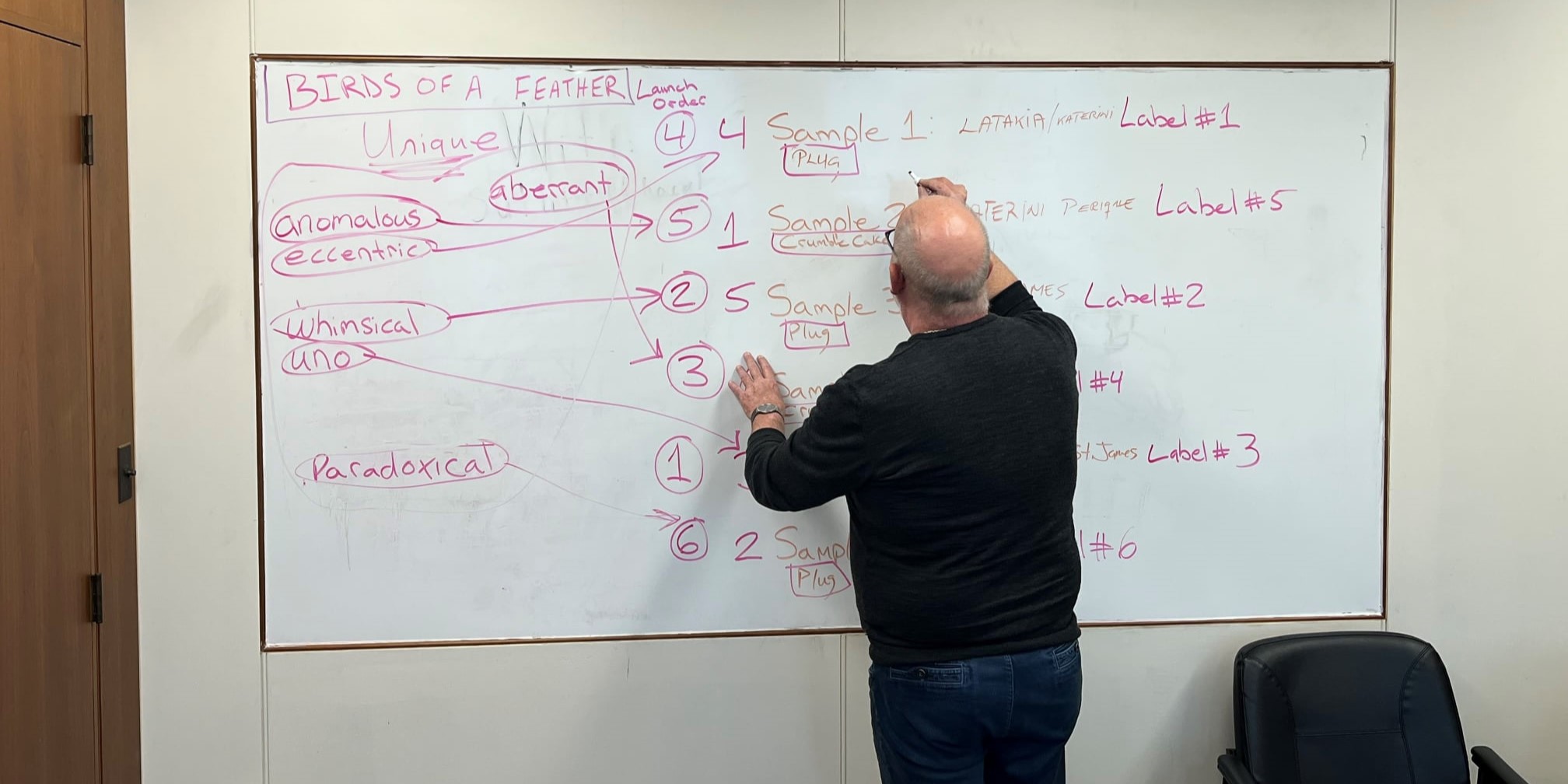 Anyway, for a much more detailed dive into the Birds of a Feather series, check out our blog on Jensen’s visit and the development of these blends. Let’s get into some Whimsical.

So unlike Uno, which was a crumble cake, Whimsical is our first plug of the series. If you’ve had Seattle Pipe Club’s Hogshead, which is manufactured by Sutliff, that should give you a good idea of this cut. A sizable, dense brick, but you won't be needing a knife to get through it. 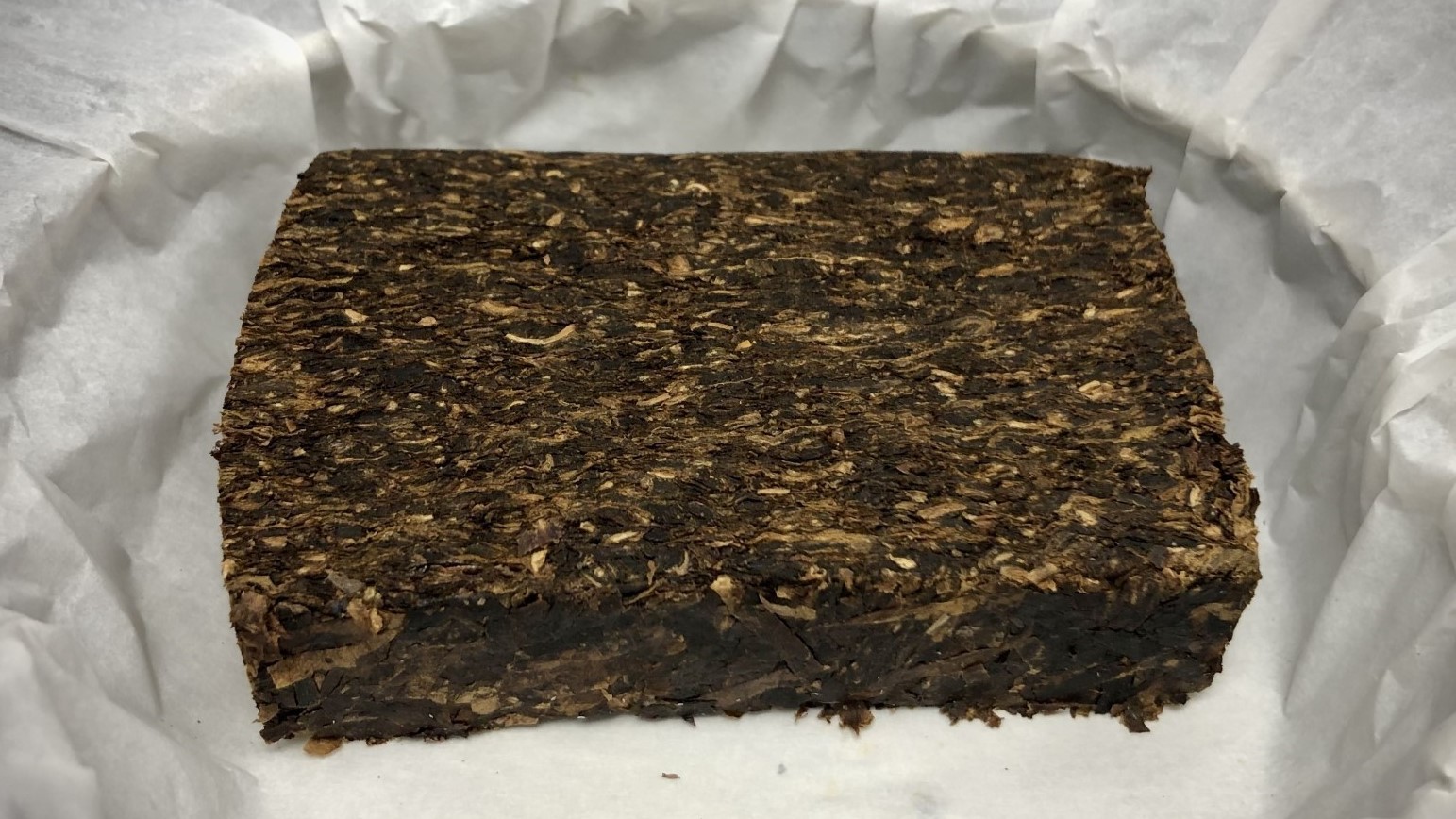 I peel off a strip and rub some out. The appearance of blonde streaks on the surface of the plug belies their more scant presence when rubbed out, exposing dark brown-reds in abundance and even darker Perique.

The tin note emits earthy, barnyard scents with dark fruit and a tangy note. Maybe it's something between that fruit and tang but orange peel comes to mind.

Moisture is great, just enough to give some options for drying out but not so much that it will need a day on the counter. In fact, I don’t think it would be too fussy to pack now but I’ll go with my intuition and give it a half hour or so.

As is now tradition, the inaugural smoke for a Birds of a Feather release must be in my Georg Jensen Granat 78—a fine bent Egg from the master blender’s pipe making days. 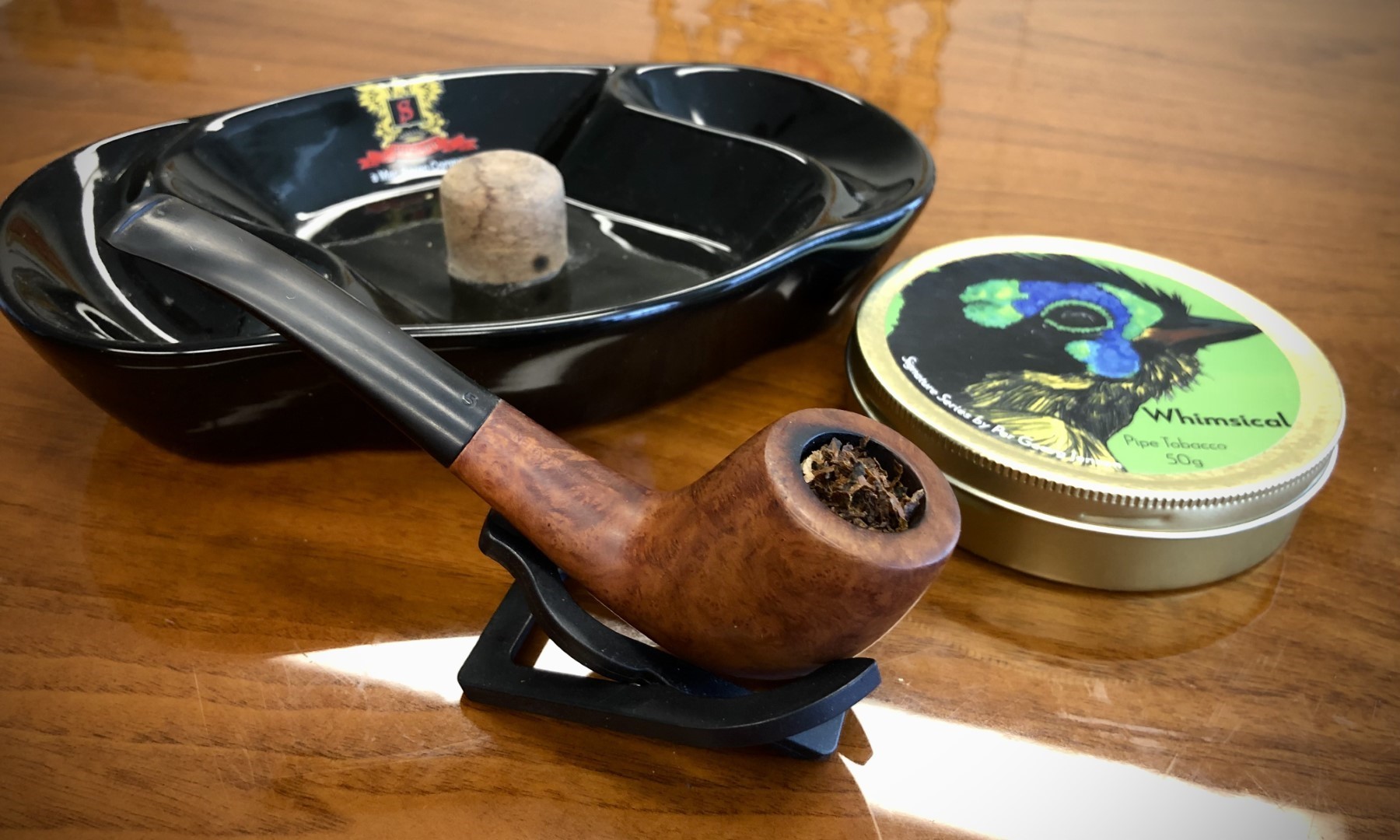 I give it two chars which offer bread, some sweetness, and an earthy spice. Once I start puffing away, I’m getting plum, bread, earth—the spice is a bit subtle. That red tang develops in the first few minutes, below it bright Virginia citrus and grass.

Has a very cooperative burn, easy to keep at a smolder without relighting often.

I actually start to get that orange peel sort of citrus tartness halfway through. The earthiness seems to come a little fuller, slightly woodsy, I think from the modestly applied Burley. The Perique certainly has more to say down the bowl—earthy, figgy, savory. A really nice pepper offers that bit of umph in the sinus without distracting from the flavorful reds.

Toward the bottom a toasty, nuttiness comes through a bit more.

As I’ve continued to smoke Whimsical a bit more has come through. Though it wasn’t a new blend to me when I started my notes for this column, I hadn’t smoked it regularly as I have been lately, which is always more conducive to really digging into a blend, or so it’s been my experience. Each smoke seems to elaborate on or skirt fresh impressions.

Often, Sutliff red Virginia leans to that vinegar profile like you get from 515 RC-1 or the Crumble Kakes. I didn't find much of that from Whimsical at first, but I'm starting to notice a reminiscent tang that reminds me of the Red Virginia Crumble Kake but pitched down and less acidic. There's a distinct mouthfeel I get with those reds, a very direct sweet tang. Fizzy is the word that comes to mind—sort of fizzy on the tongue. I like that.

As I smoke my last bowl of Whimsical for the purposes of this column, Linger by The Cranberries can be heard from the abutting room. Hopefully not a passive aggressive remark on the room note!

(It’s the radio so unlikely.)

Something I’ve been experimenting more with in smoking Whimsical and Presbyterian Reformation is packing with a fold and stuff method. Honestly I’ve mostly only rubbed out my tobacco fully no matter the cut. So this is a bit left field for me.

With Whimsical, it’s not difficult to pull a layer from the plug to fold and work like a flake. It challenged me on the light a bit more but I definitely see how you get something different out of the smoke. For one, I get more of the Perique taste, not just feel. It adds a lot of the umami depth to the palate - that mushroom quality - while retaining the spice and plumminess. This came through well in my somewhat narrower bowls, such as my trusty J Mouton Bushido Poker. 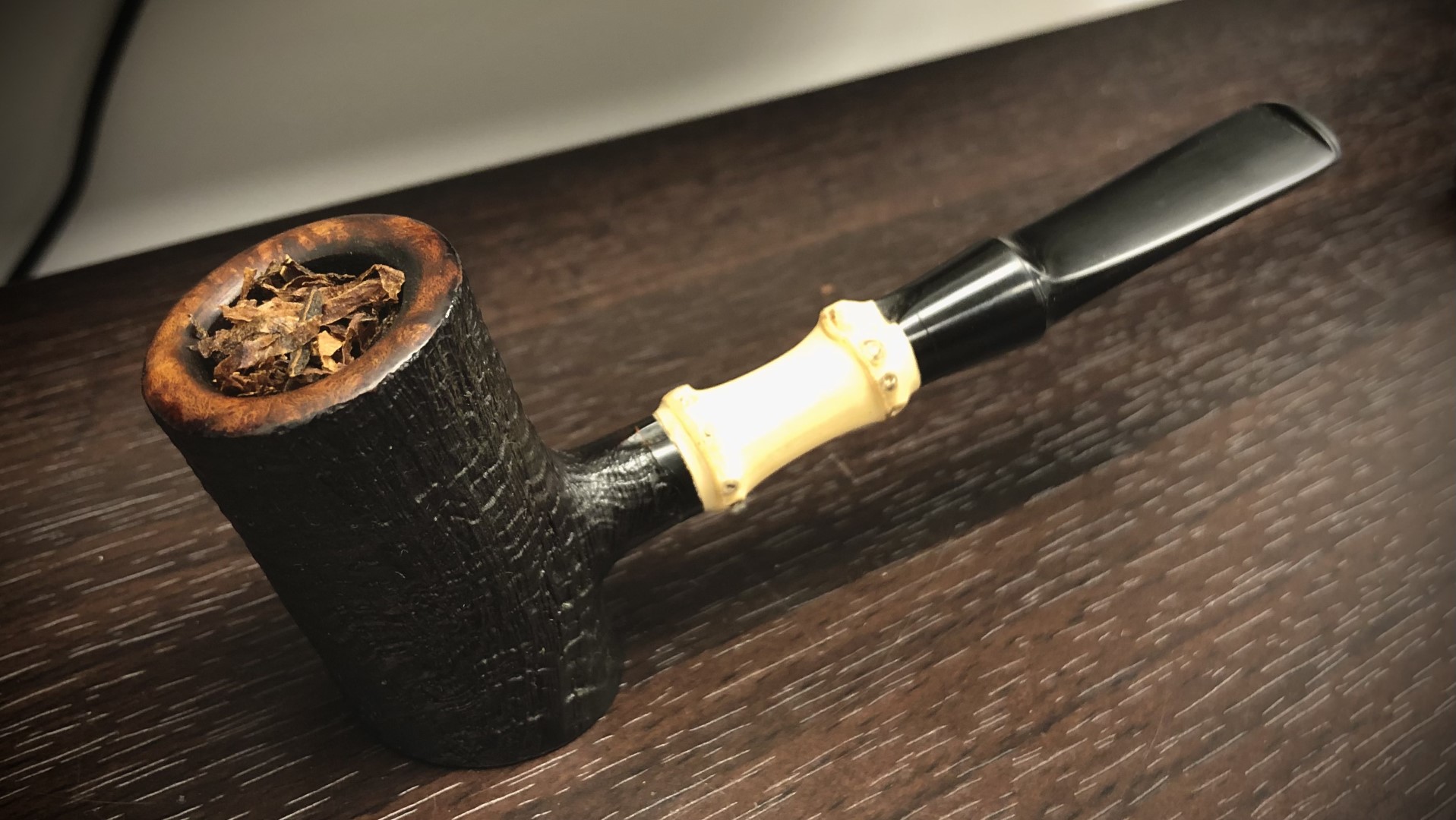 Further down the bowl I notice some more of the brights come through, I bit of lemon grass and zest on the edge of the tongue offers a light complexity. Toasty breadiness comes through more, a very nice compliment to the earth and tang. I’ve had some packing squabbles while trying to figure it out, but when I’ve gotten it right, it was very right.

All in all, another lovely blend from the Birds of a Feather series! This one is a bit more straightforward than Uno, not the same complexity. Whimsical is a VaPer that surely has something of its own to it. 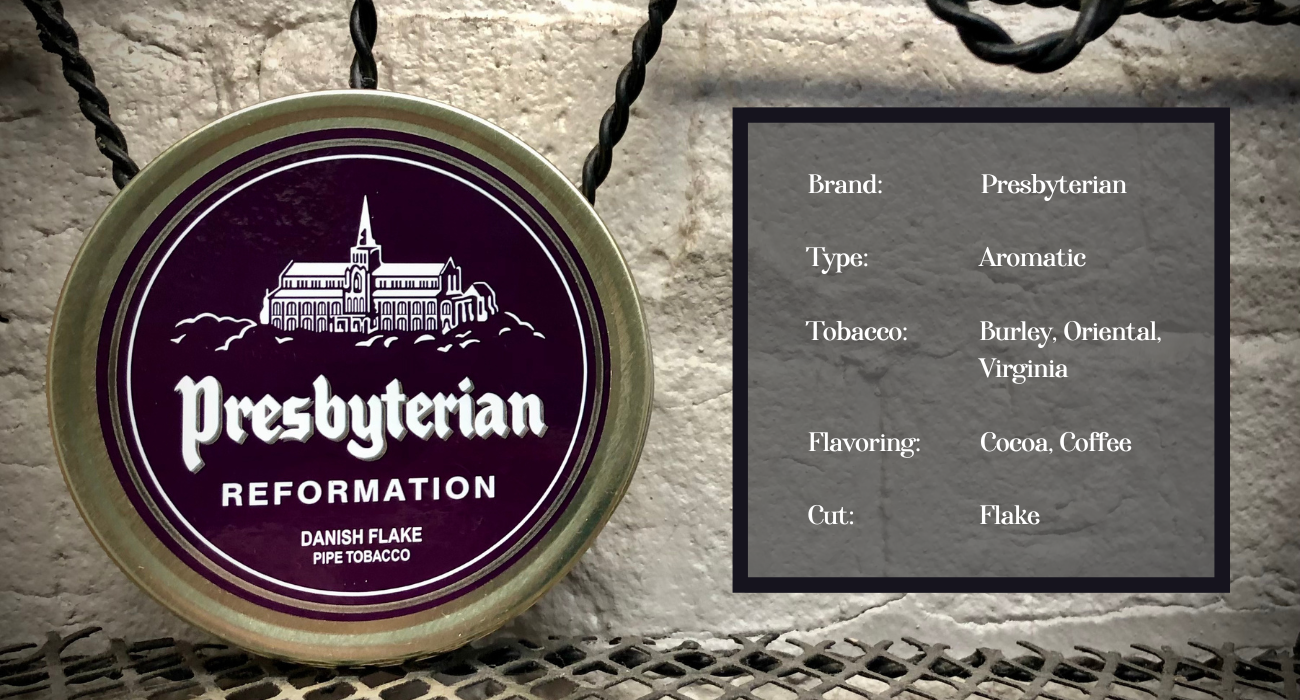 Presbyterian is of course the infamous Planta blend which has long been the standard for a light English mixture. Now a production of  Mac Baren Tobacco, we see the Presbyterian brand put to a Danish Aromatic—let’s check it out.

Loosely together oily flakes of beautiful mostly dark brown. A little moist, I rub some out about an hour before packing. 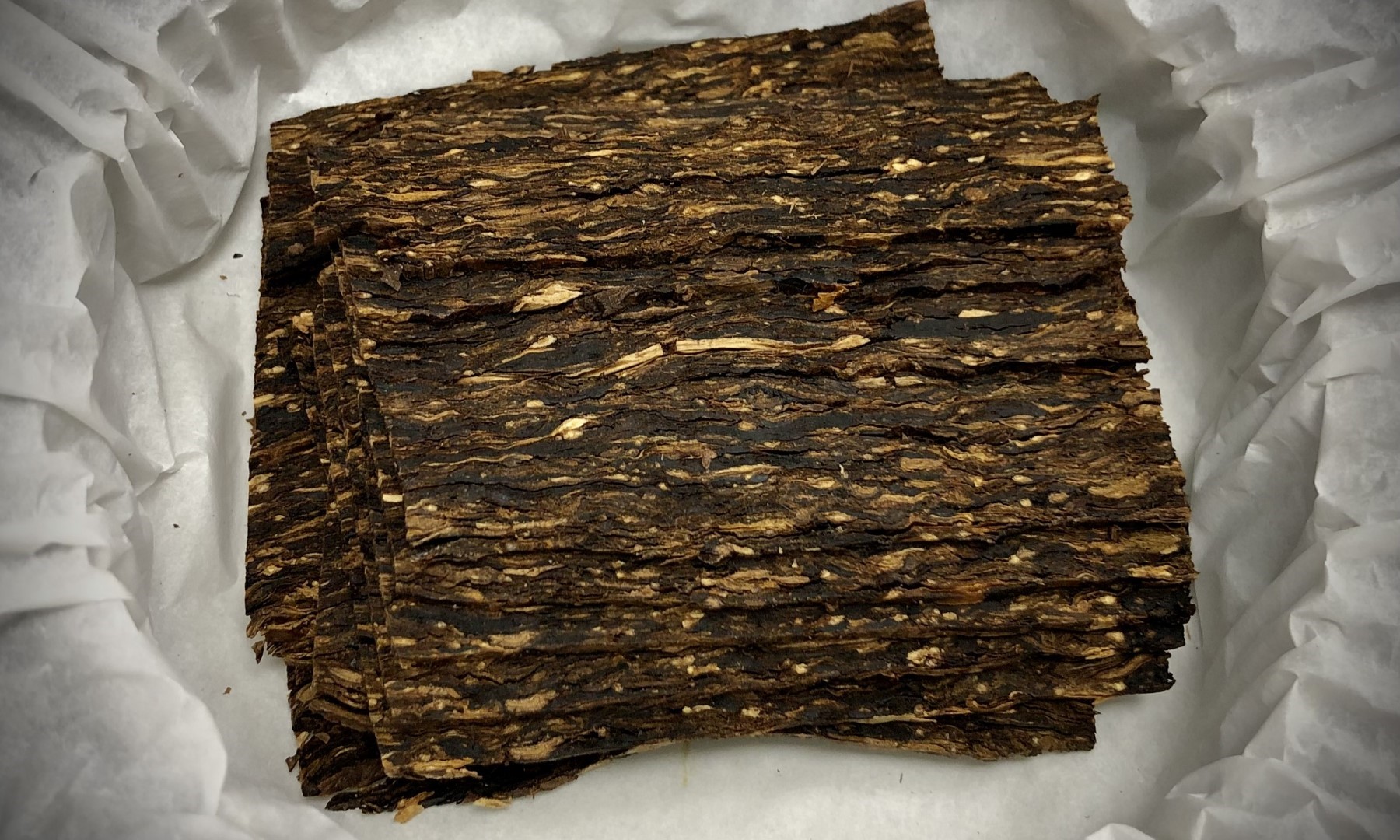 There isn’t too strong of a tin note so I don’t expect a heavily topped Aromatic here, which washes with what one would expect from a Danish Aromatic. But you can certainly find that top note—berries and...butter scotch? I’m intrigued.

I have my Longchamp straight packed (note: forgot the picture, whoops!) and I’m ready to light up.

The char light greets me with tartness and berry. As I get to smoking, that initial impression persists, though it isn’t berry in a sweet-fruit way, there seems to be little sweetness—but between the topping and Orientals there is a nice floral quality. Virginias seem to be second beneath the topping with a nice grassy, vegetative note.

Some of the sweetness seems to develop roughly halfway down the bowl, but ya know what I don’t really get a sense of? That cocoa or mocha quality referenced in the tin description.

This has to be one of the most obliging smokes I’ve experienced in terms of ease. Slow, easy light, consistent. I thought it may actually have been a tad too moist when packed—shows what I know.

Okay so into the last third or so I start noticing some Burley nutty, breadiness. This is after a relight where I brought the ember back in a very mellow smolder—I think that may have helped show a different side of the profile.

So the first thing I wanted to do after my initial smoke of Presbyterian Reformation is try it in a larger bowl. My Tsuge E Star 66 was perfect, not too big, but I feel the narrow Longchamp delivered a fuzzier image of this one. From the charring light I get that familiar berry, tart and floralness. However, upon getting to really smoking, the nutty, bready Burley is certainly there. 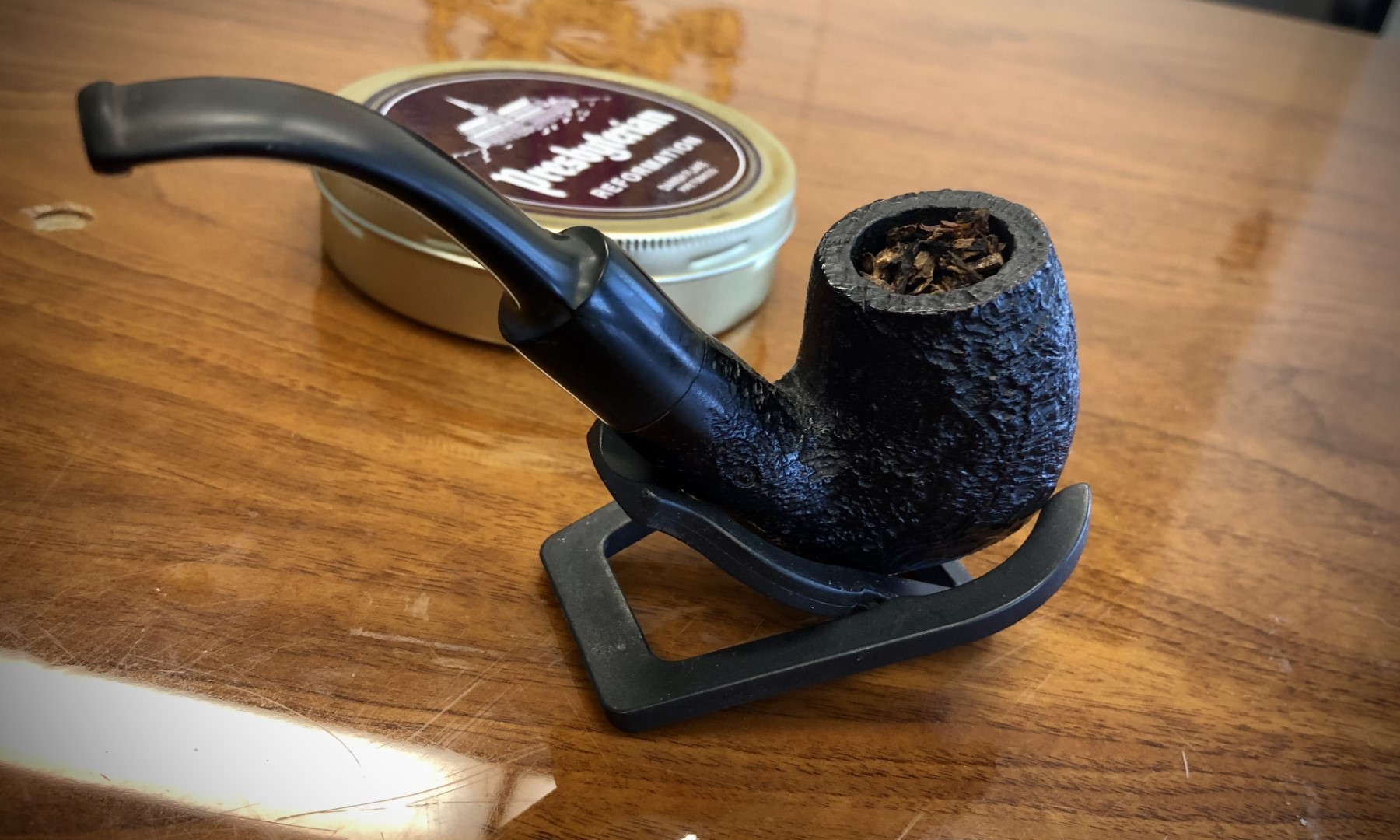 Between the Tsuge and other larger bowls I’ve smoked over the past week I can certainly see where the mocha comes into play, although it seems to be a foundation subtly beneath the berry, sorta miscellaneous fruit flavor that I assume are the “Danish flavorings.”

With the exception of getting more of that Burley/mocha side out of larger bowls, Reformation is very consistent smoke to smoke and throughout the smoke. I expected a little more strength from the Burley but it’s a good mild to medium strength smoke.

Like I mentioned in a previous Whimsical entry, I’m quite accustomed to rubbing out pressed tobacco fully or at least near fully, but have opted to get a little more experimental this time. So for a few of my recent smokes I’ve employed a fold and stuff packing method.

I was especially excited to pack up my most recent restoration. I found this interesting bent Brandy that I’ve spruced up. 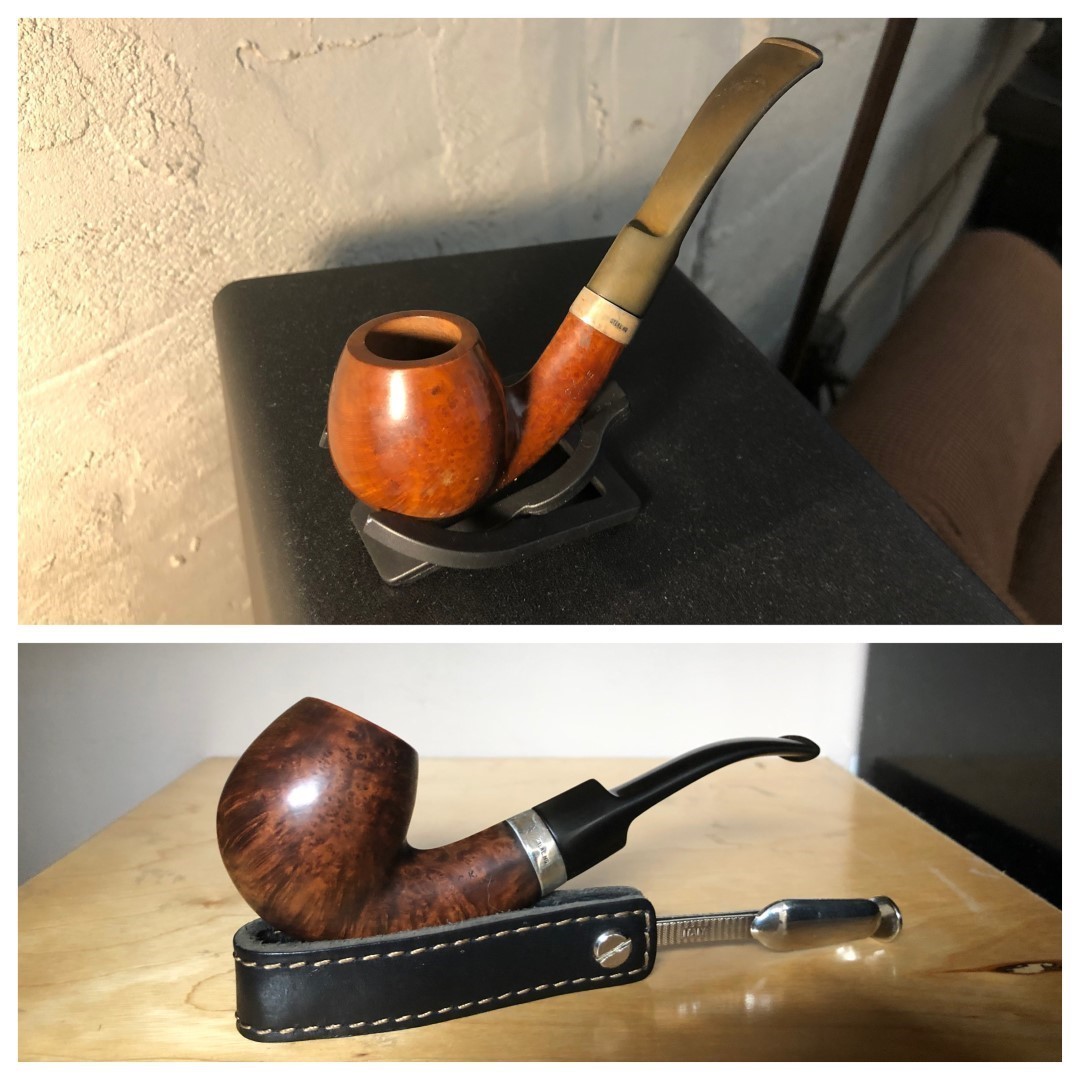 The stamp says "C. K. Own Make"—I wasn't able to find a bit of information on it. “”Restoration” may be overstating it actually—didn’t take too much work. It appears it was never smoked. But the finish was very faded and a lot of oxidation in the stem. So I set about removing the finish and dying the stummel, lifting the oxidation with some Briarville Stem Oxidation Remover, and taking micromesh pads to the whole pipe to get some shine.

Okay back to the blend at hand.

Just like with Whimsical, there has been a good deal of trial and error with packing in this way. I’ve started to get a feel for it, being very meticulous and mindful of the draw through each stage of packing. I’ve also come around to rubbing a bit out for the top and the bottom of the chamber which has made a big difference. 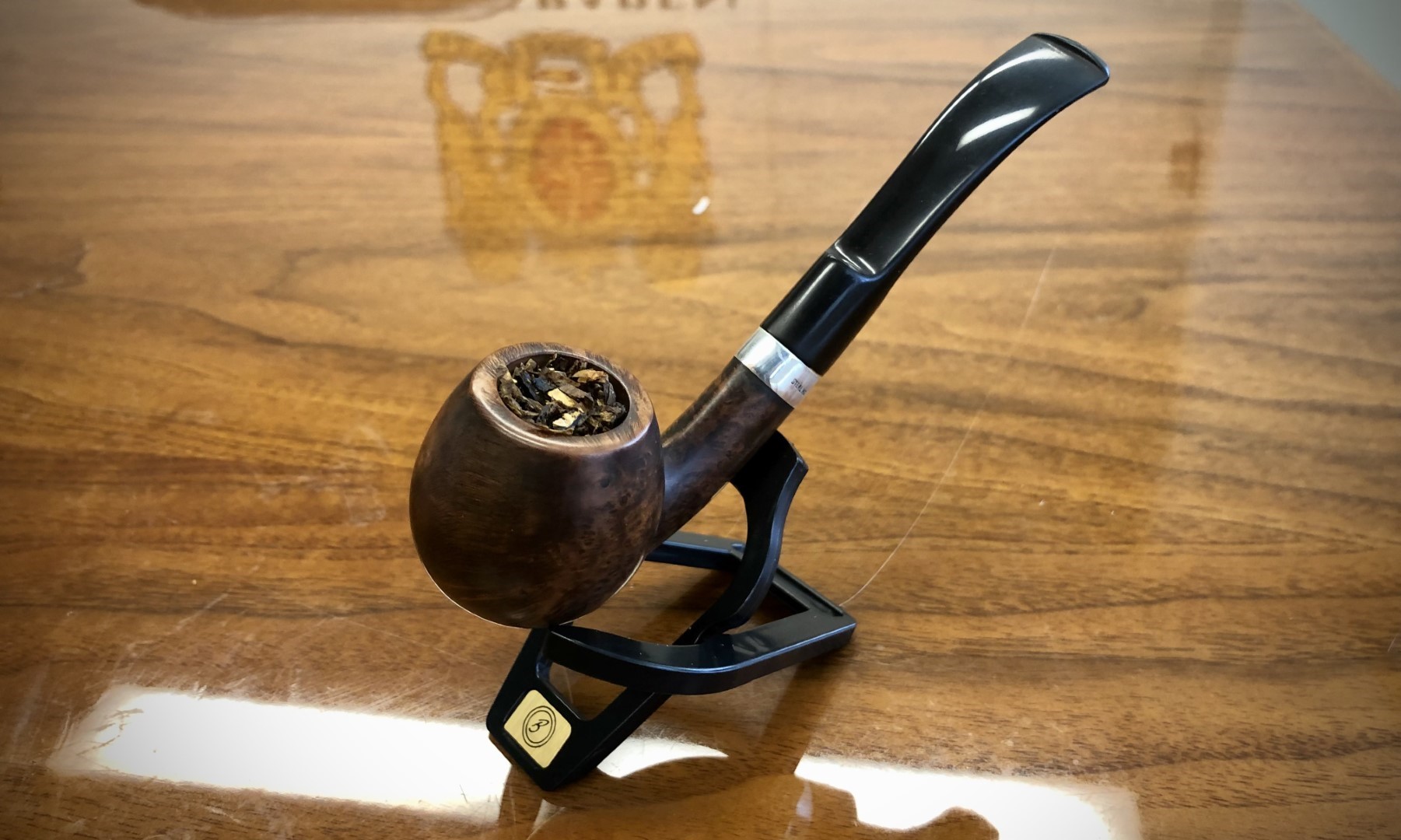 That berry flavor seems especially defined, it’s tart, rich, and dark. I feel I get more of the mocha note this way too. The burn is nice and slow, but then again, Presbyterian Reformation has been an easy smoke since my first bowl. If anything I ran into a bit more finickiness with fold and stuff packing, but only some smokes, likely due to me being a tenderfoot to the method.

I think the taste ought to have a notch up, at least in the context of packing this way.

A quick note to end things—the Tobacco File will change a bit going forward. I’ll be posting columns in this format monthly now instead of every other week.

However, there will be special, likely shorter columns for new releases and maybe other notable occasions. Basically the formula is the same, just a bit more infrequent “main” columns and more focused ones on what’s new. I was going to do the switch after the last column until I realized these two very special new releases lined up!

Having stand alone Files dedicated to new stuff also means I’ll get to do more exploring of what’s already out there with the main columns, so recommendations are encouraged and appreciated!