Hello, hello! It has been a pleasant, mild October with one pleasant, mild blend and one, well, pleasant blend. I’ll be getting into Cobblestone Camping from the Outdoors series and—a bit in theme with the spooky season drawing to a close—the Lovecraft inspired Dreams of Kadath from Cornell & Diehl’s The Old Ones series.

Also, we’ll have two featured cigars this month. I usually choose one that I’ve particularly enjoyed lately—Perdomo’s 10th Anniversary Champagne Robusto in this case—but I decided to add the Cobblestone Classic Habano Toro as well. I just tried this one the other day and found it a great smoke and for a very affordable price. 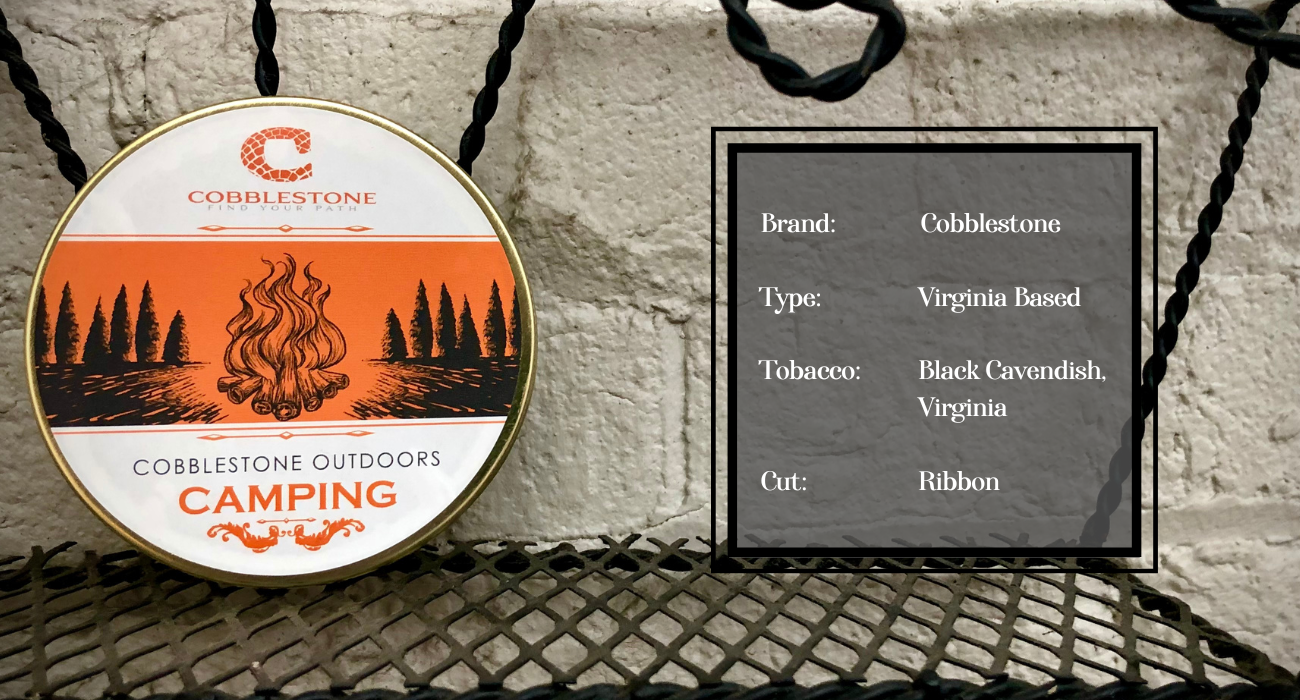 I’m excited to write about Cobblestone Camping this month. Along with the rest of the Outdoors series and Chess series from Cobblestone, it is manufactured by the German blending house Kohlhase & Kopp. I very much enjoyed Cobblestone Knight, which featured in a Tobacco File a few months back, and more recently tried Cobblestone Hiking as it was a Mystery Blend for TobaccoPipes.com’s August Compare & Share. It became a fast favorite of mine, so I’m quite eager to further explore the marque.

I open the tin to find very dark ribbons, mostly in the dark brown to black range, mottled with scarce strands of red and gold leaf. 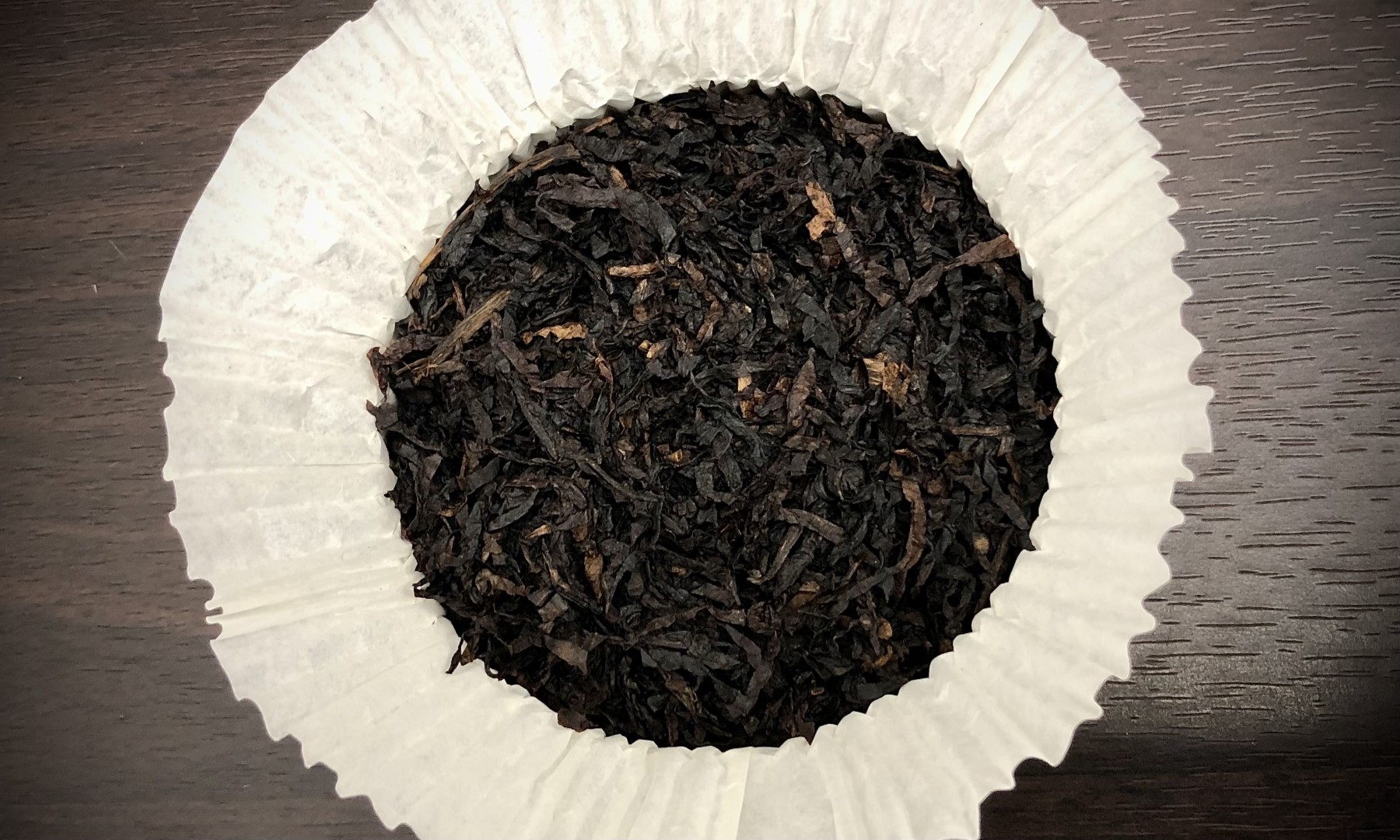 From the tin note I get a deep, mellow woodiness. Loamy sweetness and a floral somewhat potpourri note. Maybe a little cocoa? I imagine a very light topping is added.

The coarse leaf is quite dry right out the tin, ready to smoke right away. It’s not friable yet, I can roll it in my fingers without it breaking down, but it probably wouldn’t take too long to get there, so while I usually smoke from a freshly opened tin for a bit before transferring, I go ahead and move most of the contents to a jar so that it is airtight and doesn’t lose any more moisture.

I pack up my Molina Barasso 518 (my very first pipe) and give the trusty smoker a light.

The char light introduces a woody flavor and brown sugar notes expected from the significant portion of Black Cavendish. As I get to puffing I find citrus and a plummy, raisin Virginia presence.

Cobblestone Camping takes a light with ease, no surprise with the leaf moisture, but given that Black Cavendish, it keeps an easy cool burn. 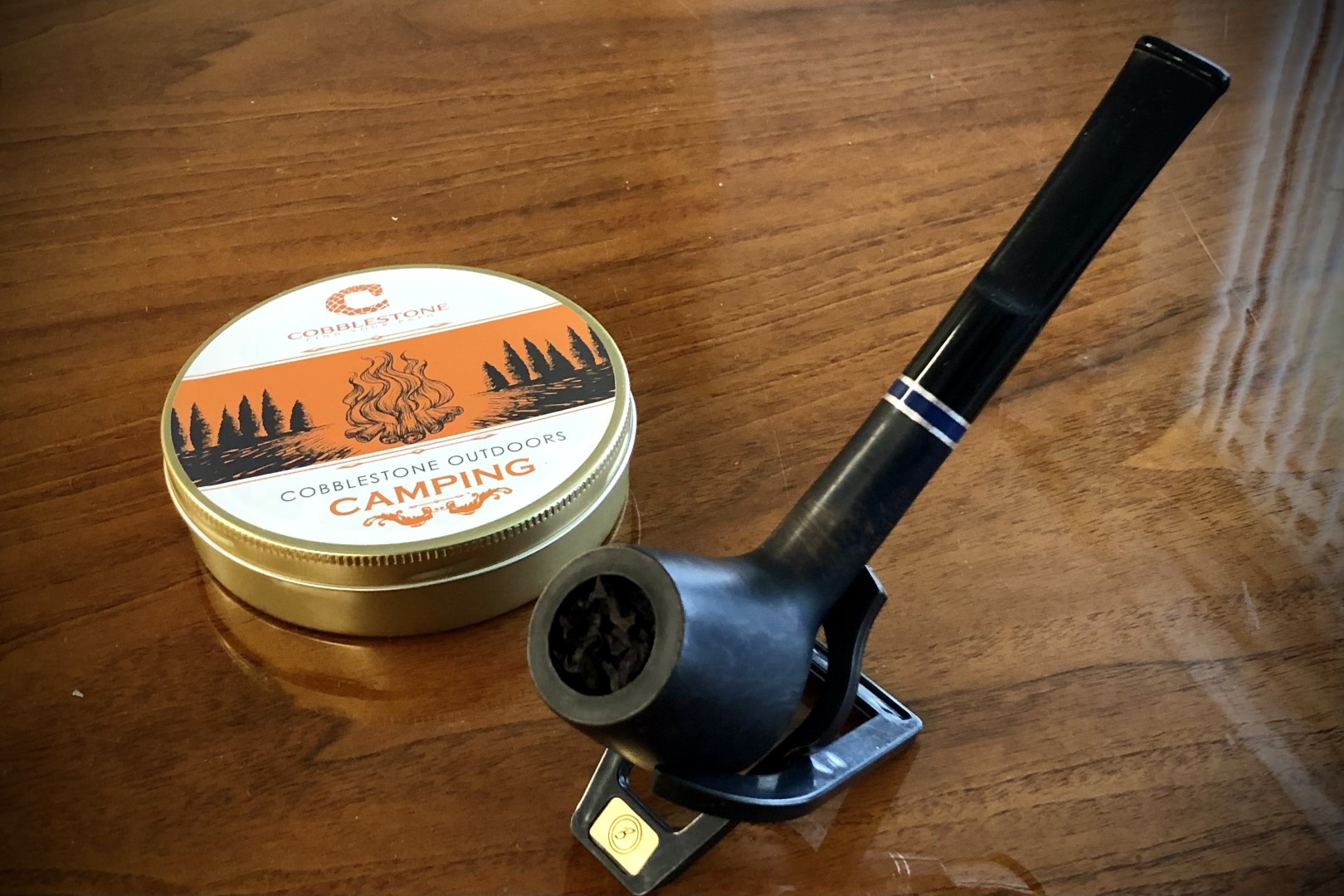 While I notice some sort of topping, it’s very light, and seems to be a simple flavoring, sugar or something basic to round out the sweetness, likely bolstering the present, natural sweetness from the Cavendish process. It has that caramelized sugar sweet note, reminds me a bit of butterscotch, but has a wood and spice side to it as well. Tart citrus is consistent.

One thing I’ve noticed as I’ve gotten familiar with Cobblestone Camping is the spice note in the sinus. It’s very light, this is a mild, amiable blend, and that spice is an inviting presence that adds a little intrigue in the sensory department without the “weight” of a peppery, Perique spice.

At the moment I have Camping packed in my Missouri Meerschaum Diamondback cob. The citrus is more noticeable, adding dimension against the bready Virginia and sweet Black Cavendish. The currant Virginia note really compliments the dark, woody side of the blend. 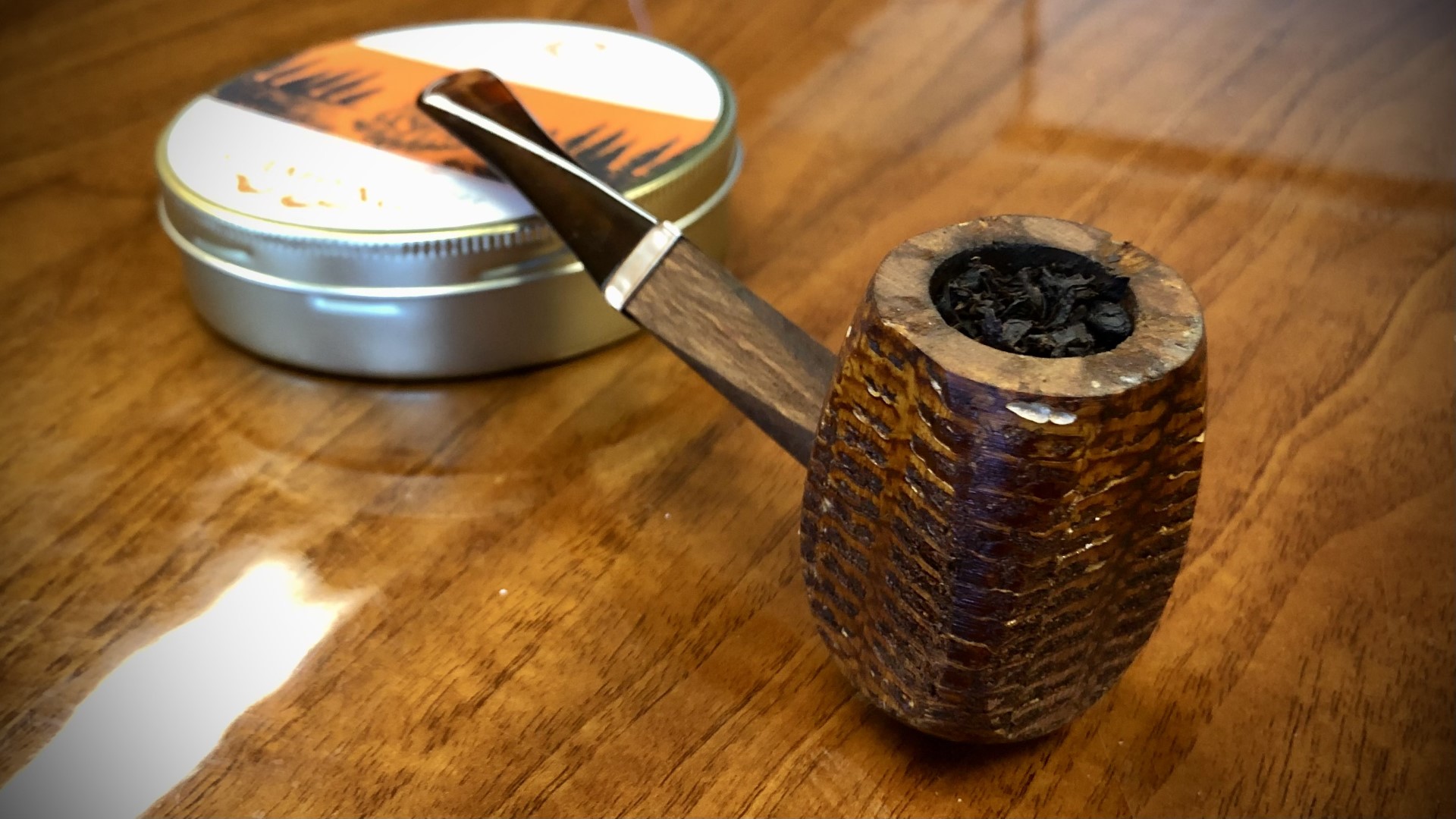 I don’t imagine I could get Camping to bite if I tried—not surprising for a blend with a good portion of Black Cavendish, which burns cooler due to having already been “toasted”.

Being consistent, uncomplicated, un-biting, I’ve especially enjoyed this as a blend while I’m occupied with something and not so much thinking of the smoking. I enjoy blends that aren't too busy for such instances and also that don’t bite if I mindlessly don’t keep a slow, steady cadence—which I have a habit of when clenching.

Cobblestone Camping certainly now has a place in my recommendations for those looking to explore outside Aromatic blends. The nice Virginia flavor showcases the natural allure of the varietal while any roughness is surely smoothed by the Black Cavendish. There’s a light top flavor playing to the natural strengths of the profile. No bite, little nic hit to deal with. We even get that meager, amiable spice in the sinus adding dynamic, yet it’s nothing even the mildest tolerance would be offended by.

Consistent with little complexity but significant charm. In this way, Cobblestone Camping reminds me a good deal of Cobblestone Knight. Very different Virginias blends for sure, but I had a similar impression of here’s a simple mixture doing exactly what it means to. Straightforward and easy. 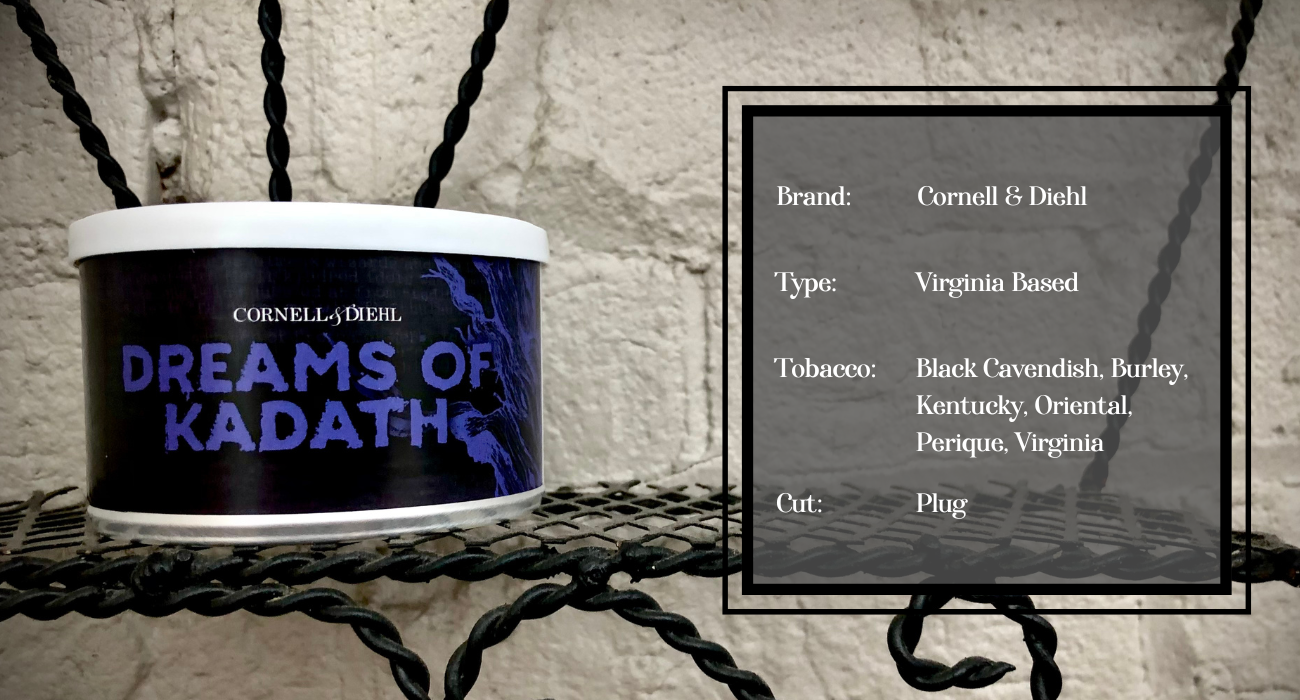 Well here we go, entering the ancient city of Kadath. This is my first time smoking Dreams of Kadath, but I’ve had two others from The Old Ones series. Visions of Celephaïs wasn’t for me (very unique, but its grape topping isn’t really to my taste. I could see it being a holy grail Aromatic to the right palate). However Innsmouth I loved. Like Innsmouth, we have a special varietal in Kadath, the Oriental sub-varietal Katerini.

Breaking the seal immediately unleashes a strong, delightful aroma. Stewed fruit, citrus, a liquor/fermented note. Even in the tin note you can tell Kadath has depth and plays boldly in both earthiness and sweetness. 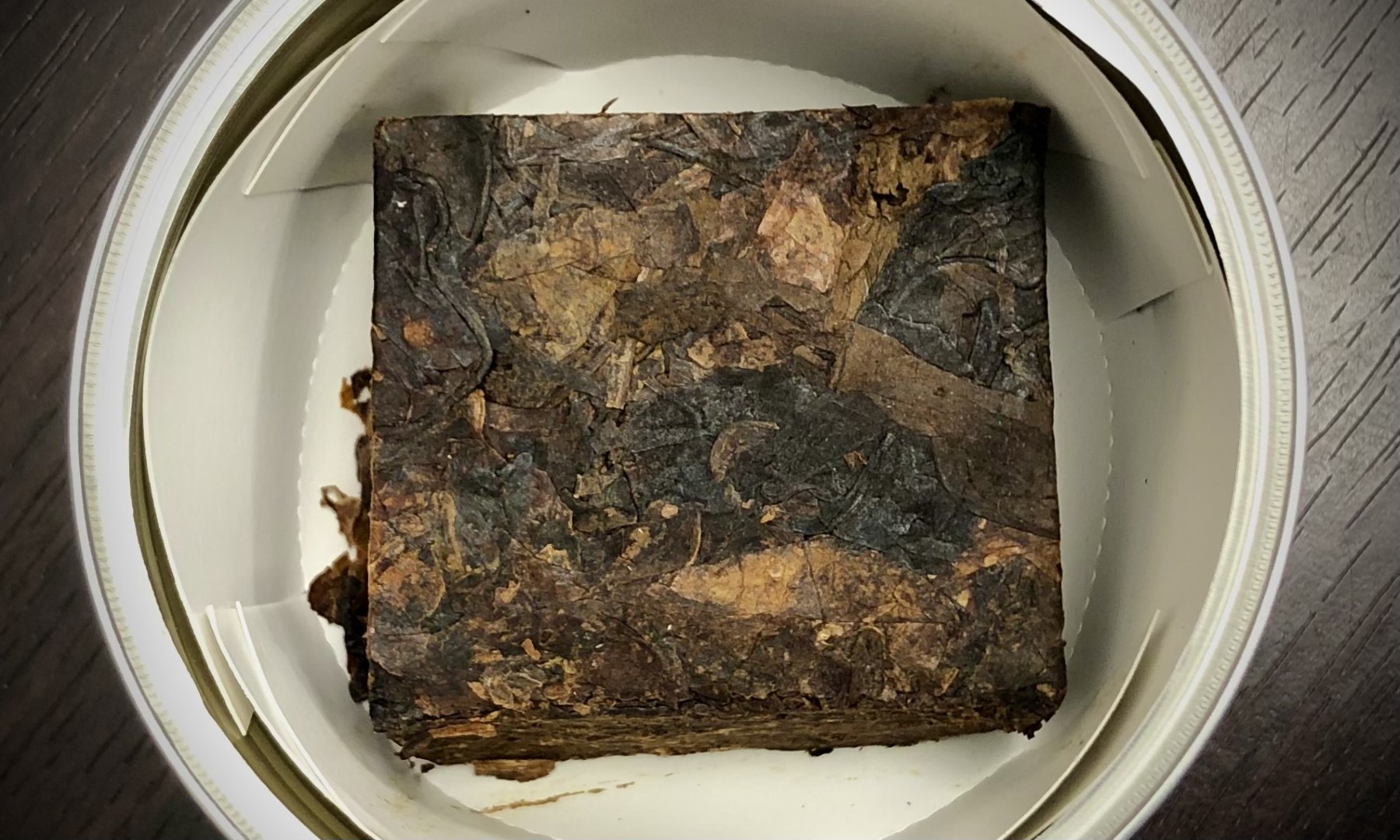 And of course we must talk about this neatly cut plug, classically made up of sizable cuts of leaf. This more traditional plug is actually a first for the Tobacco Files. We’ve had plugs that are more in the realm of extra-densely pressed cakes, but you need a knife to really cut through this one. It would be easy enough to pull off a layer from the top, but given the size of the component leaf, you wouldn’t be getting the intended portion of varietals I imagine.

I forgot that I'd be dealing with a true plug but I had a box cutter here that worked well enough for taking off a corner. Each piece of leaf is still quite sizable so I break some down a little further to layer and put on top of the pack as kindling.

Something tells me a wider bowl will be more pack-friendly and offer a fuller view of this mix of myriad varietals. However, I’ve been excited to smoke this new Rossi Piccolo 313, and I’ll be trying Kadath every which way eventually, so let’s start with Rossi.

Immediately it’s clear we have a rich blend in Dreams of Kadath. Earthy; grassy; tangy, fermented fruit, fig, and a bit of spice are all on display. 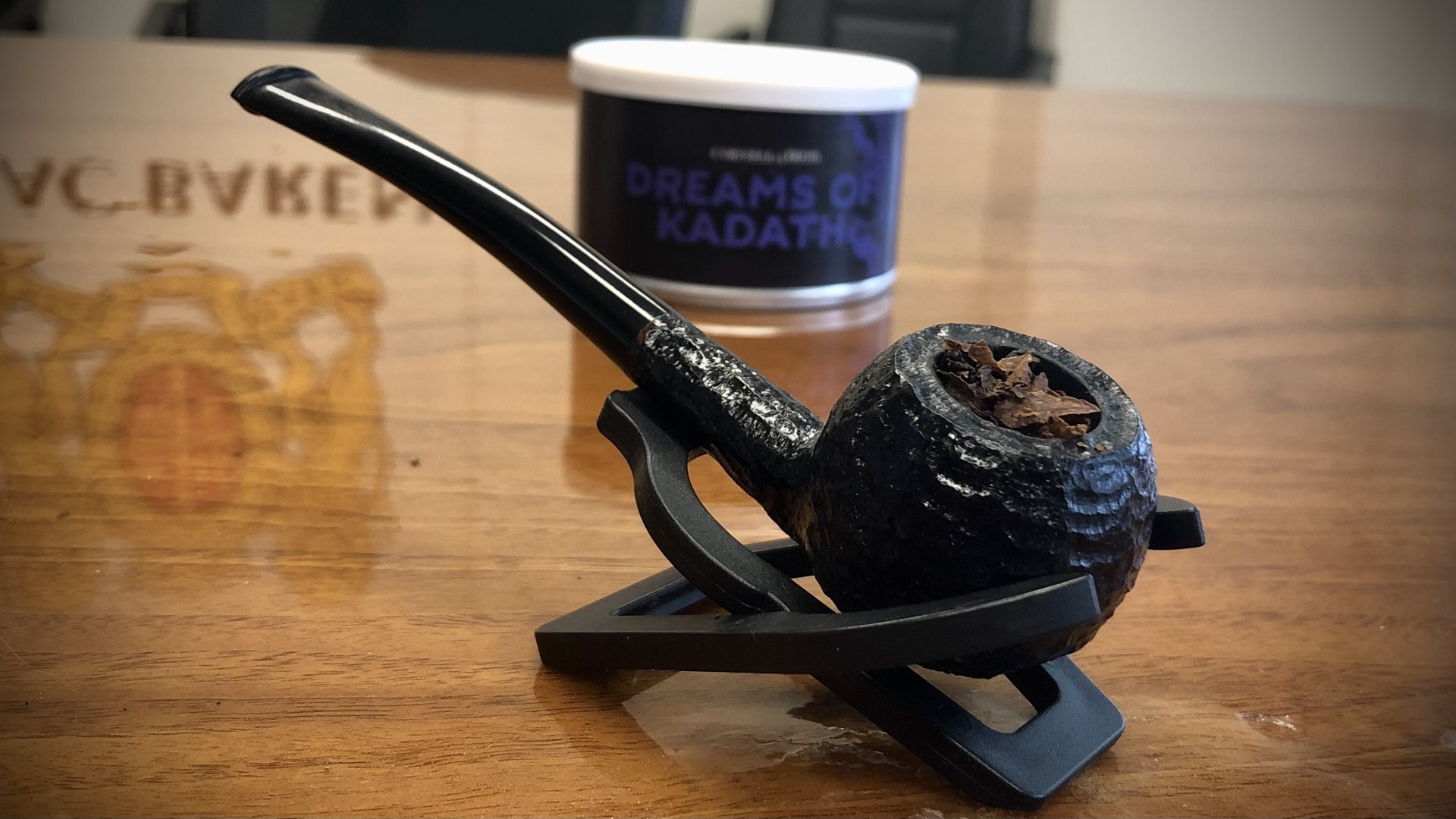 That liquor note I picked up on in the tin aroma certainly comes through, a brandy essence that is very pleasing. Earthy, woody notes from the Burley rise quickly to meet the array of floral and spice and contrast the sweetness in a complex dance of full body and flavor.

I certainly think this one calls for a wider bowl, but nonetheless, I’m very much enjoying it. It does ask for a mindful cadence to keep a nice tempered burn. That earthy side can go acrid and overbear the sweetness if over-stoked, but kept at a smolder and you get a wonderful spectrum of flavor.

Kadath is complex, I could probably go on about little impressions, but I feel like it’s best not to get too verbose on a first impression when things are subject to fall a bit more into place, so I’ll leave it here and hopefully have a more concise impression with a bit more familiarity. But I can say it’s a good first impression, Kadath very much has my interest. It’s one of those that you’re immediately excited for the next bowl, you know you’ve only gotten a glimpse and with every variable that comes from another pipe, who knows what will be presented.

After some time with Kadath in numerous pipes, I definitely find the most full range of flavor in larger chambers, but it has been a consistently pleasant smoke no matter the pipe.

With so many varietals in this mix, it can be a bit difficult to isolate the role of each component, but it’s a great blend and wading through the mystery is part of the fun for me.

The Katerini is an interesting part of the profile. Katerini is a sub-varietal of the Oriental—or Turkish—varietal family. Nowadays when we have an “Oriental” component, it is usually a mix of a few different Orientals. But here we just have that pure Grecian Katerini. There's a floral, herbal spice I imagine to be the Katerini—or perhaps emergent from the interplay between the Katerini and Kentucky. The Katerini also seems to offer that earthy, meaty, mushroom Oriental character.

We also have the top flavorings that play so nicely into the natural tobacco attributes, especially the Virginia stewed fruit.

The earthy, woody side almost has a cigar leaf character that—with the harmonious currant, spice, and smoky notes—results in a unique depth.

While it’s certainly a full-flavored blend with a good medium to full strength, the peppery spice of the Perique is palpable but unobtrusive, offering some weight without obscuring the symphony of flavors beneath.

Though I can’t think of a tobacco I would compare it to, there does seem to be something quintessentially C & D about Kadath. Perhaps the Burley umph, natural and woody which seems to swell as you smoke down the bowl. 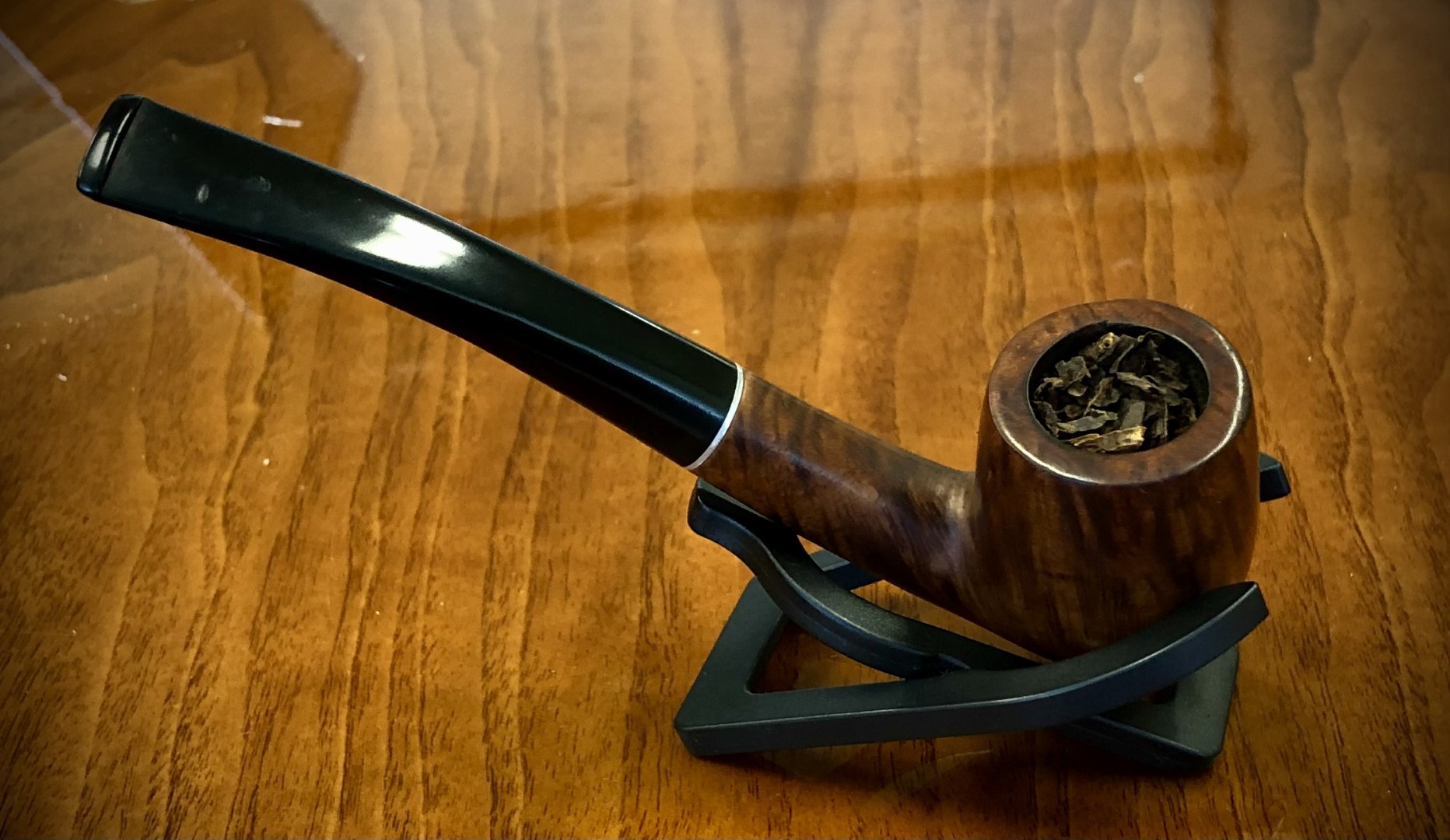 Kadath certainly makes me want to make my way through the rest of the Old One’s series.

On to the Featured Cigars, both of ‘em. As I wrote at the top of the column, I had already decided to include my notes on a Perdomo cigar I very much enjoyed before I got a great smoke from a Cobblestone Classic—my first time trying a cigar from the brand. A great smoke from an affordable brand is always a win so I figure why not include two premium cigars this time around? We’ll start with the Perdomo 10th Anniversary Champagne Robusto. 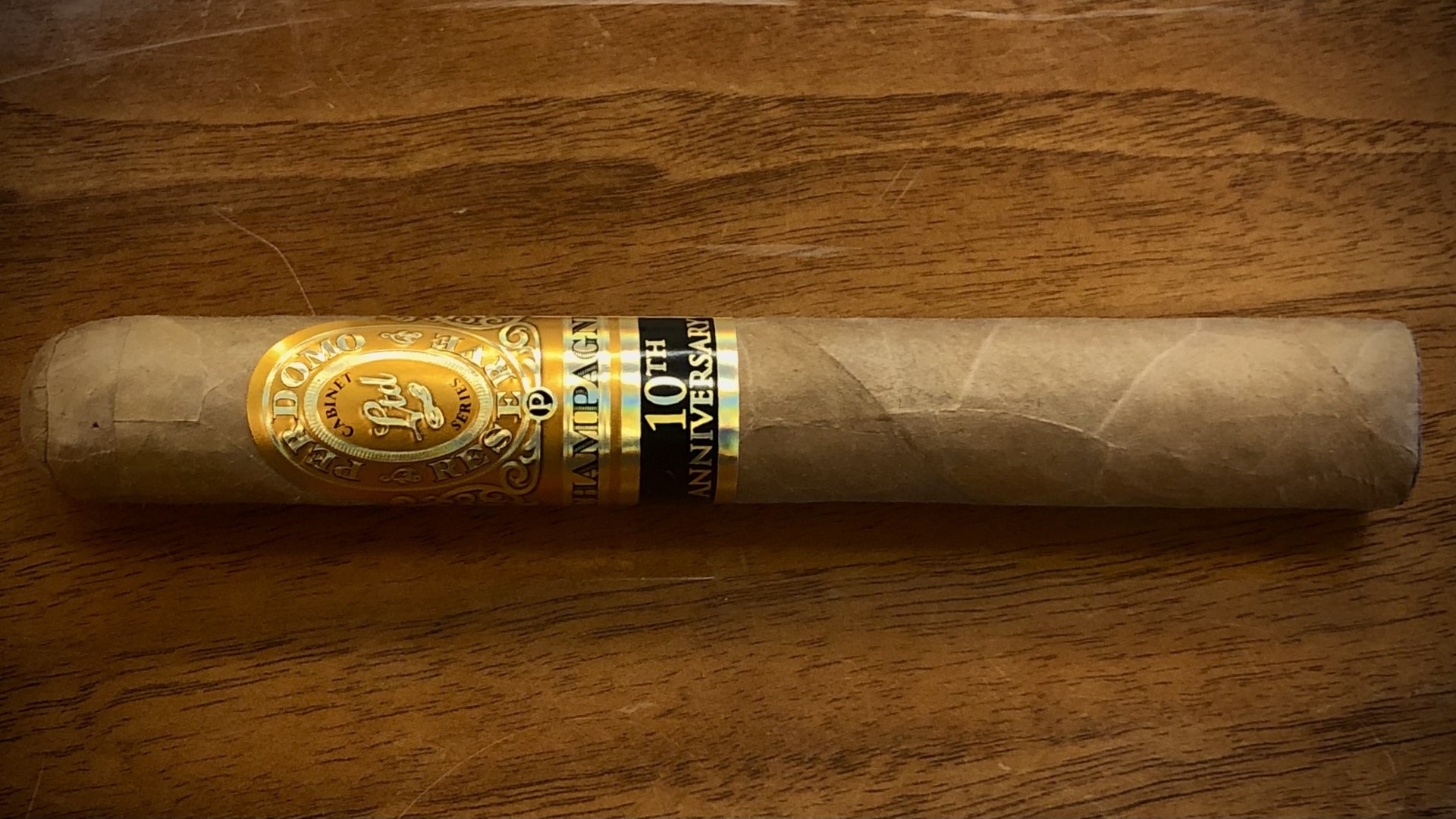 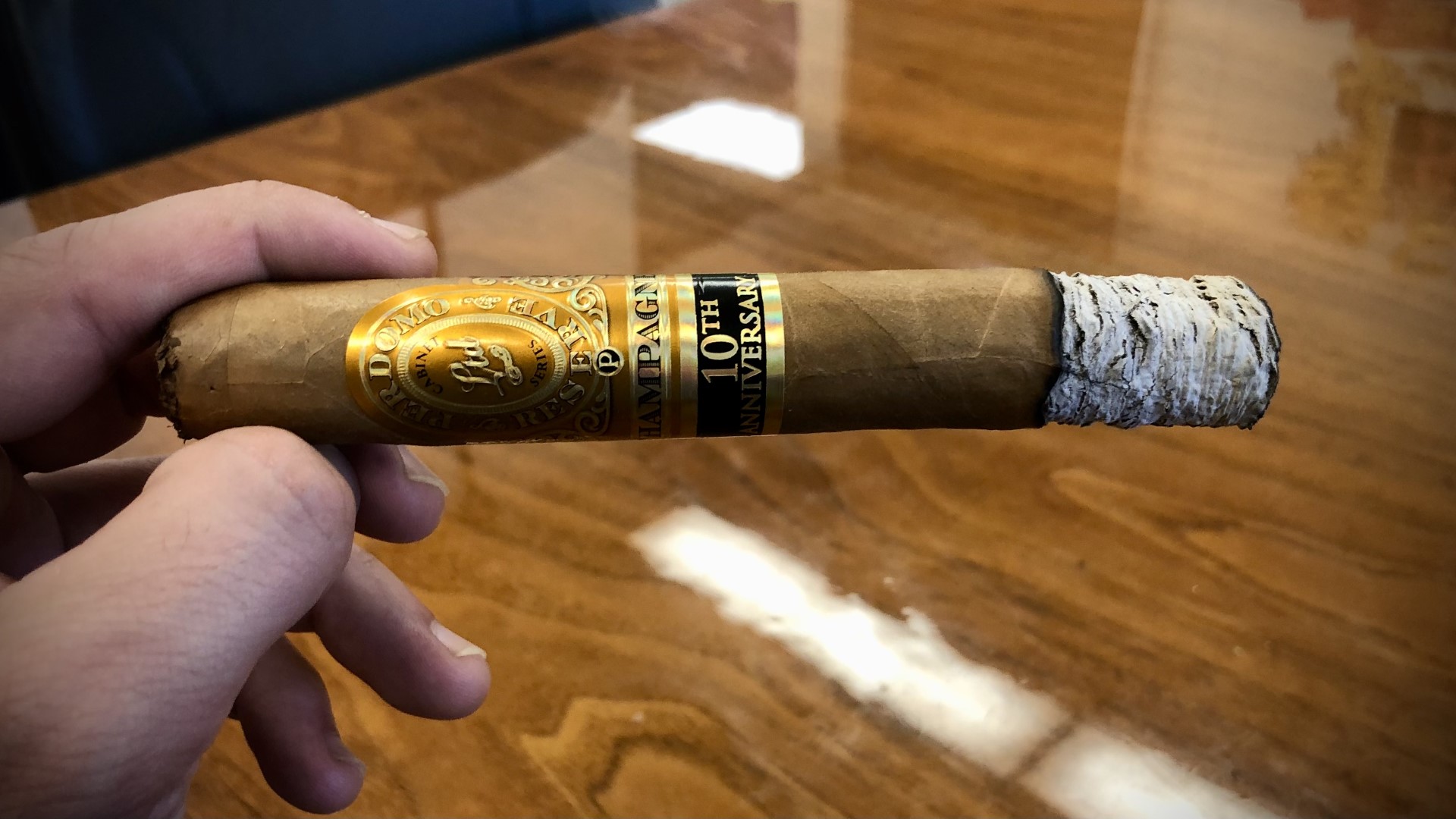 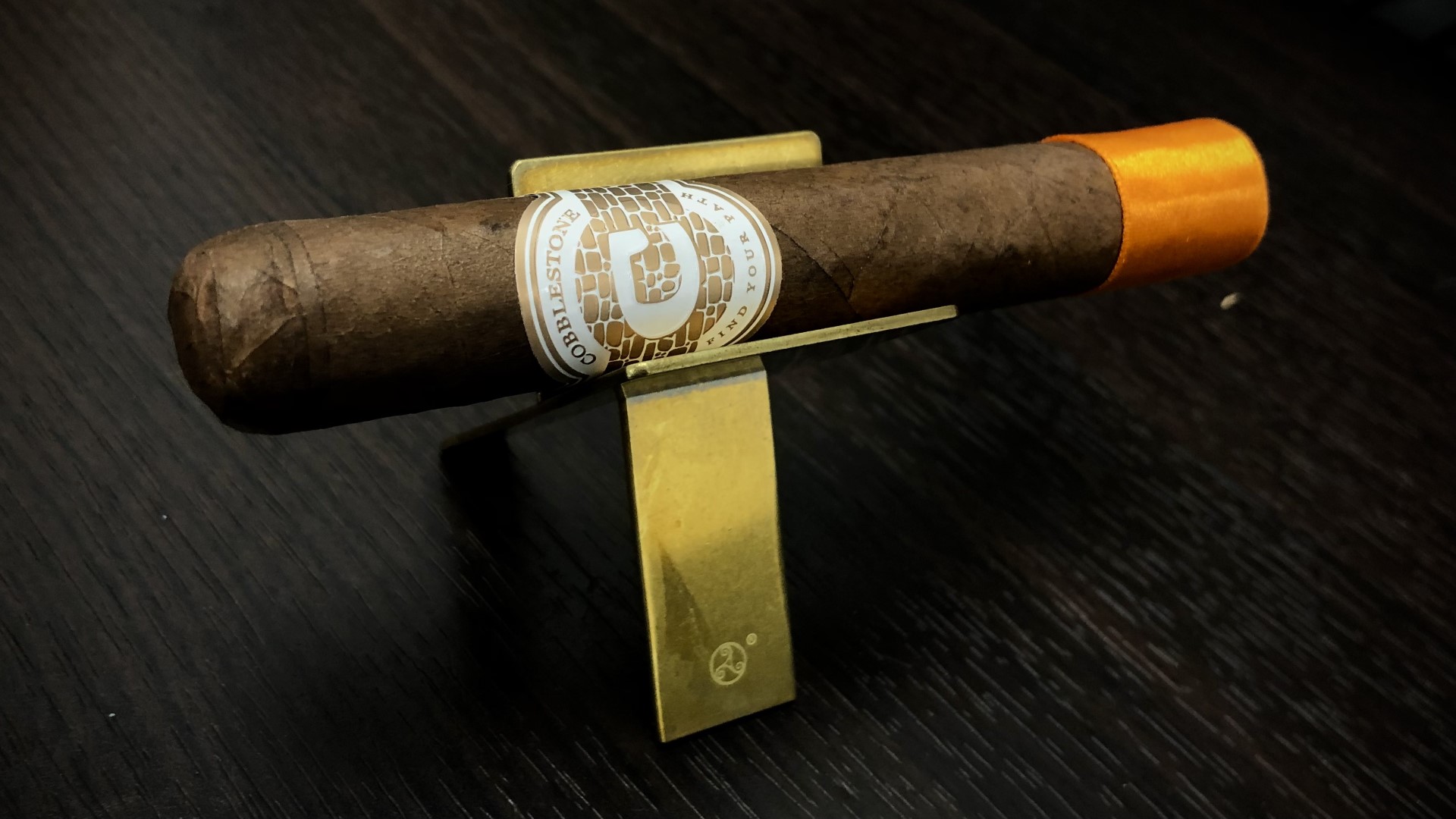 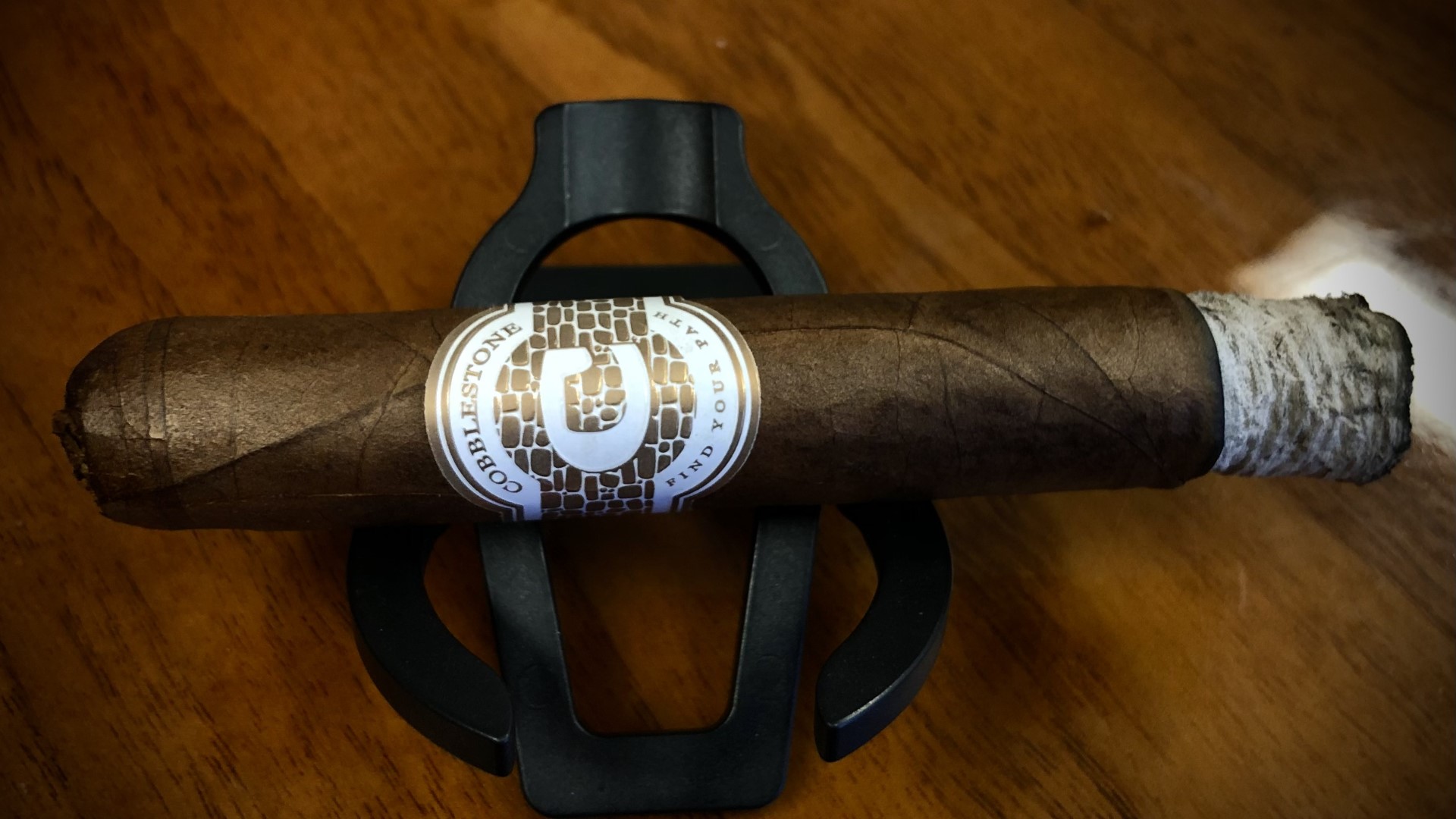 So I’m at a Halloween party the other night and as I walk into the back yard, what do I see but a farmer with a corn cob pipe? “Missouri Meerschaum!” I smile at him. Farmer turns it upside down, showing me the sticker at the base, “yeah!” with a look that said, how’d this guy know the brand of my corn cob pipe (if it wasn’t clear, my farmer friend’s pipe was simply part of his costume). “I work in pipes,” I explained, which prompted laughter from the farmer and his pals.

Not rudely, they actually thought it was a joke.

So I go digging through my backpack, pulling out my pipe bag and opening it to show them my Chacom pipe, “no really, I’m a pipe guy.” That’s usually how my friends say it, “Greg’s a pipe guy!”

I pull out my tobacco pouch—”you wanna try smoking it?”

I prompted him to smell the pouch which was filled with the honey sweet aroma of Cornell & Diehl Sun Bear. Well, I packed that farmer’s cob and pretty soon it was more than a prop.