For this month's column, we have two absolute classics that have been gracing the palates of pipe smokers for decades; more than a century for our first blend, in fact. The imitable Aromatic Virginia introduced by Dunhill in 1912, now a staple of the Peterson lineup, we have Royal Yacht. Then the maple accented roll, Mac Baren Dark Twist.

Though it wasn't my intention when choosing these blends, I think they both are exemplar of how wonderfully a little top flavoring can enrich the natural characteristics of a great pipe tobacco blend.

And of course, we'll bring it all together with some informal notes on one of my favorite premium cigars that I've enjoyed this month. The featured smoke for this File will be the pure Mexican leaf Casa Turrent 1880 Colorado Robusto. 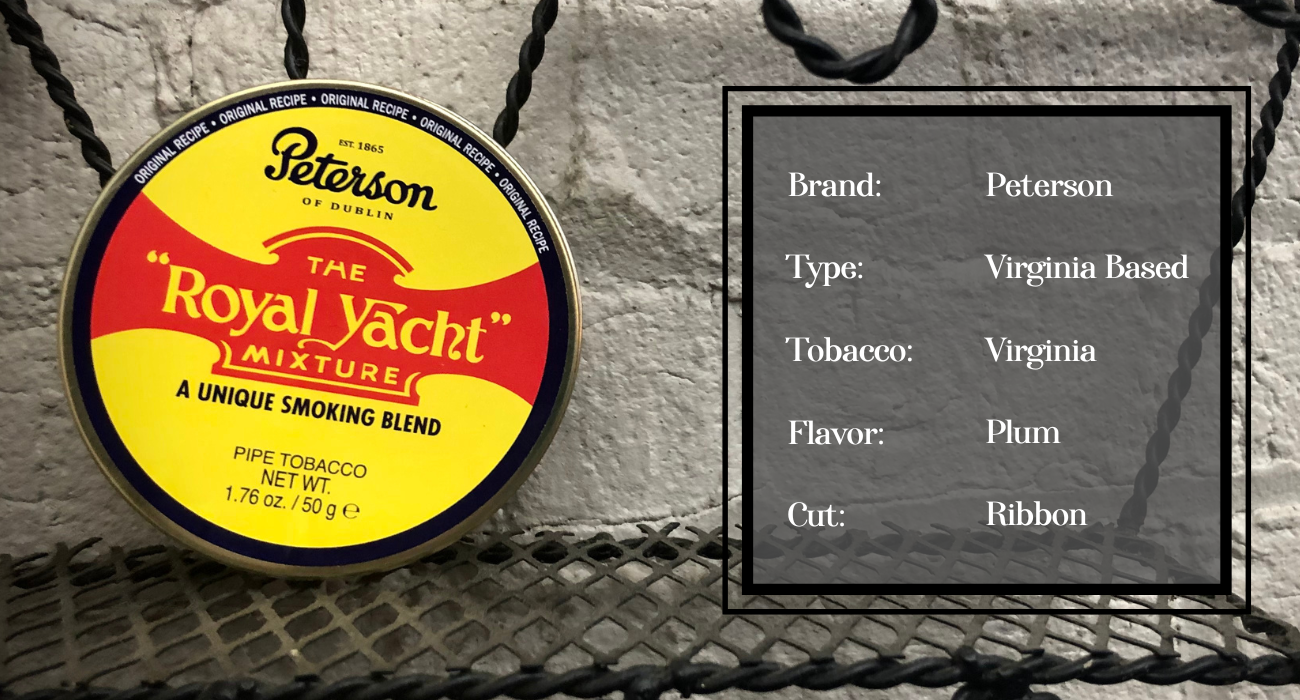 So Peterson Royal Yacht is going to be another return for me. I knew it’d be quite a busy month so to carve out a little leisure where I could, I figured I’d revisit a familiar favorite.

In my pre-smoke gabbing I usually move right to the description of the leaf, but I have to say, Royal Yacht dons one of my favorite tin designs. I don’t know what it is, something's just really classic about it, and I’m not usually one for vibrant but when it works it works. And the font’s so interesting too - looks normal enough at first glance but when you keep looking it’s just a little eccentric. 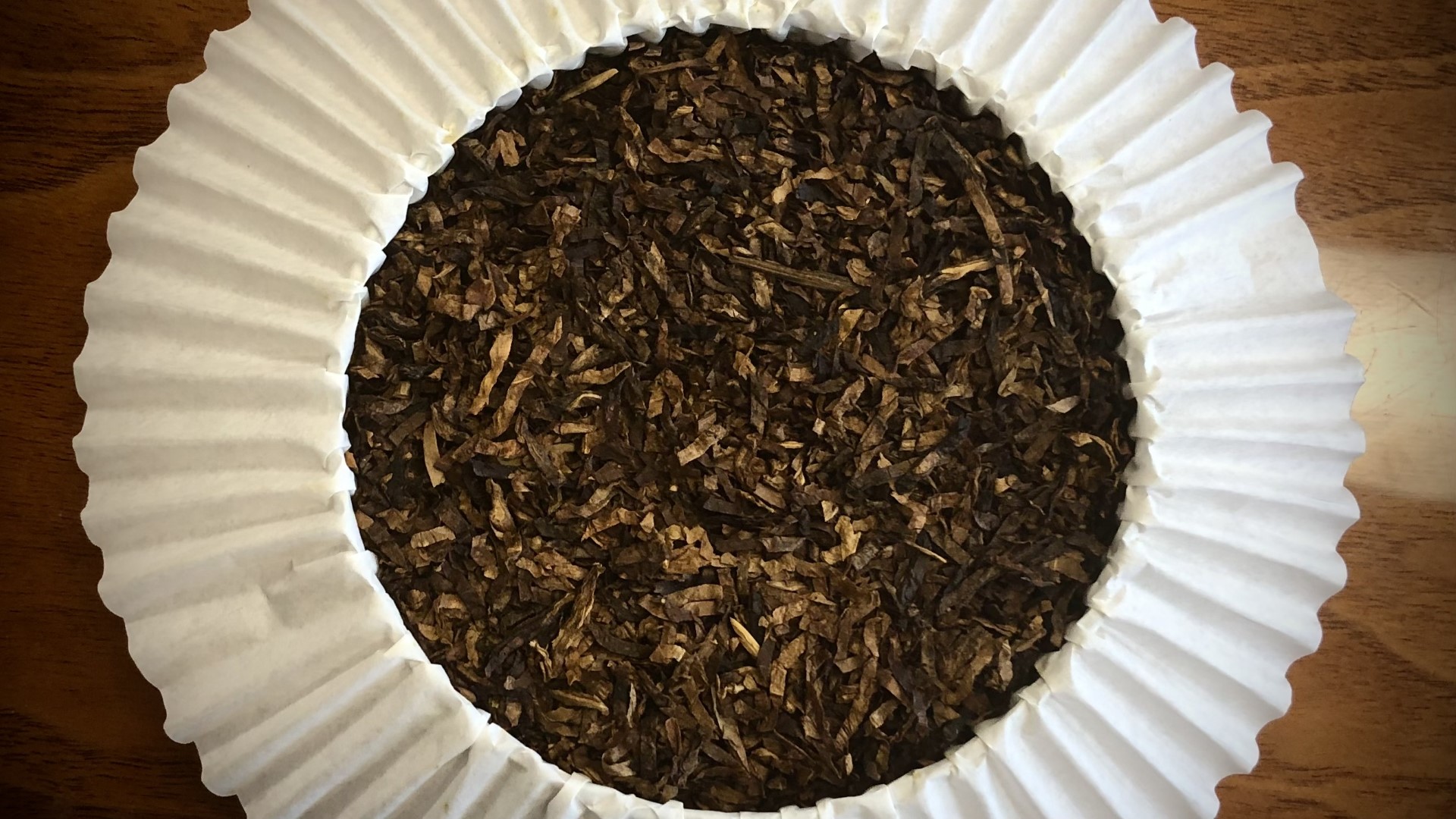 Anyway, onto the stuff in the tin. It’s a thin cut ribbon with small to medium strands of light to dark brown leaf, some with a bit of a reddish tint. It’s all Virginias here, I imagine they have to be vigilant in sourcing some high nicotine grade(s) for this one, as it’s a heavy blend and it ain’t coming from any Burley.

Of course, it is topped with a fruity plum flavor and often is referred to as an Aromatic. Subjective as these categories are, I didn’t think that was so apt a label before, so we’ll see if I feel any different now. It’s certainly not apparent from the tin note. There is a light fruitiness but grass, wood, and hay are about as well. It certainly sustains a naturalness about it.

Was planning to have the inaugural smoke in about an hour so I popped the tin to take some out to dry but the moisture actually seems perfect, so I’m gonna go ahead and keep it tinned till I’m ready to pack it up.

Royal Yacht is a consistent joy to smoke, but it has a good deal of strength one should be mindful of.

From the start, the Virginias offer citrus, bread, and grassy notes. There is certainly a plummy, fruity note, though it's hard to know if much or any of that is the Virginia contribution or if it's all the work of the top flavoring. At any rate, it's still a natural, dark fruitiness, far from saccharine. 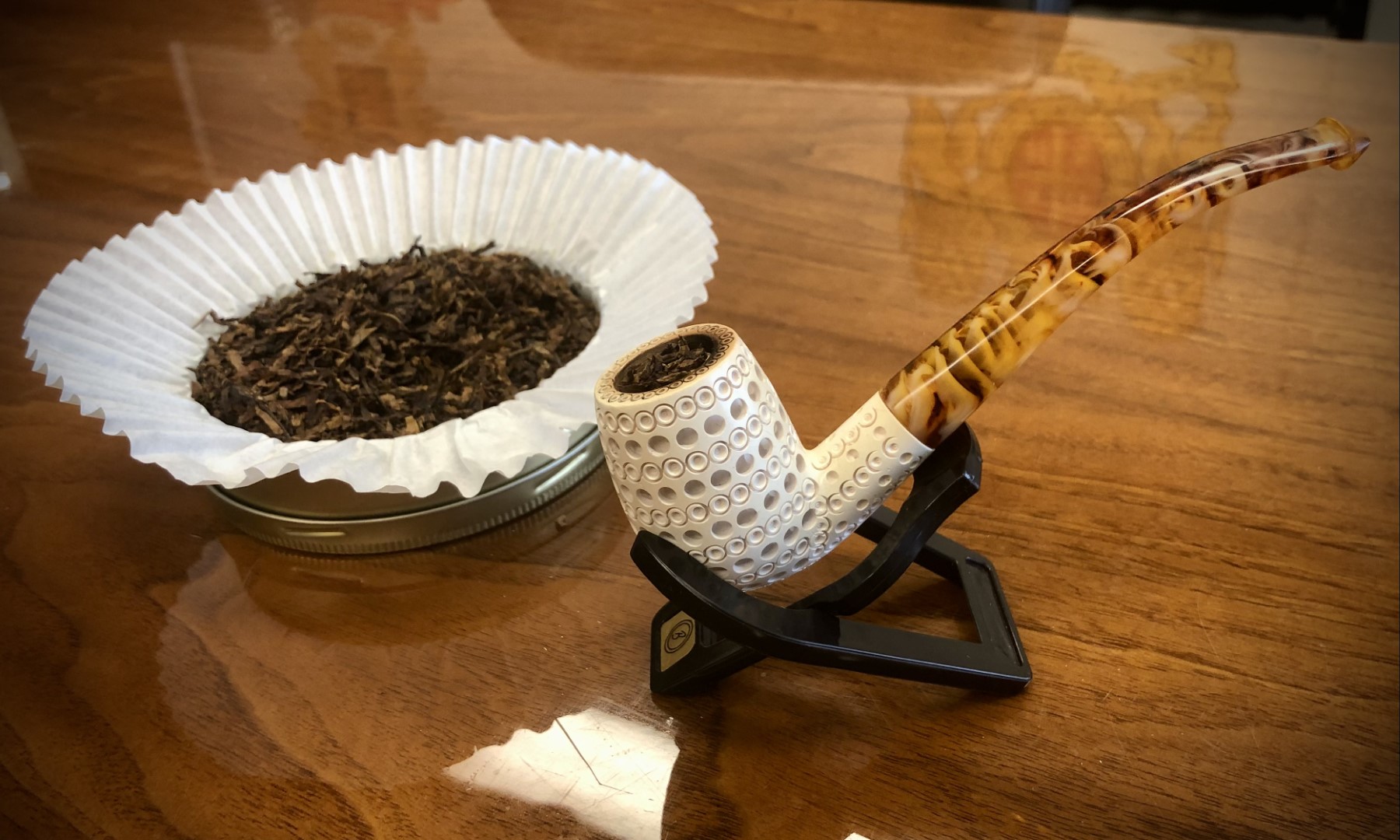 There is a woody, herbal quality to the Royal Yacht. It's one of those stronger blends that feels strong. By which I mean, often that oomph comes as a developing nic-hit–mostly noticeable when the effect comes on. Royal Yacht is felt right away in the back of the mouth, up into the olfactory.

As I remember from Royal Yacht, the flavor is very straightforward, a consistent profile that isn't complicated and doesn't surprise. It doesn't have the fermented side of some Virginias, which I think is at the root of a lot of complexity with Virginia blends. The dry, woody, floral base is even and hardy. Chamber size doesn't seem to factor into its performance, so I take the opportunity to enjoy some of my smaller pipes that often don't lend themselves so much to complex blends. My meerschaum bent Billiard of unknown origin is a favorite among them.

Royal Yacht has a very pleasing smokiness—not in the sense of smoky, campfire flavor like Latakia, but like the spread of Black Cavendish, though I wouldn't call it dense or creamy like you get from Black Cavendish. The spread without the weight, if that makes sense. It's certainly another factor to my appreciation of Royal Yacht as a light-it-and-forget-it blend (so long as you're ready for the nic hit).

Since Royal Yacht is a rather consistent mixture, and one I came to with prior experience, there's not much wrestling to do with it. Nothing I've uncovered since my last entry, so I'll leave it at that. As I type, I've got some Royal Yacht packed in my Missouri Meerschaum Emerald cob, enjoying the pleasure of revisiting a tried and true classic. 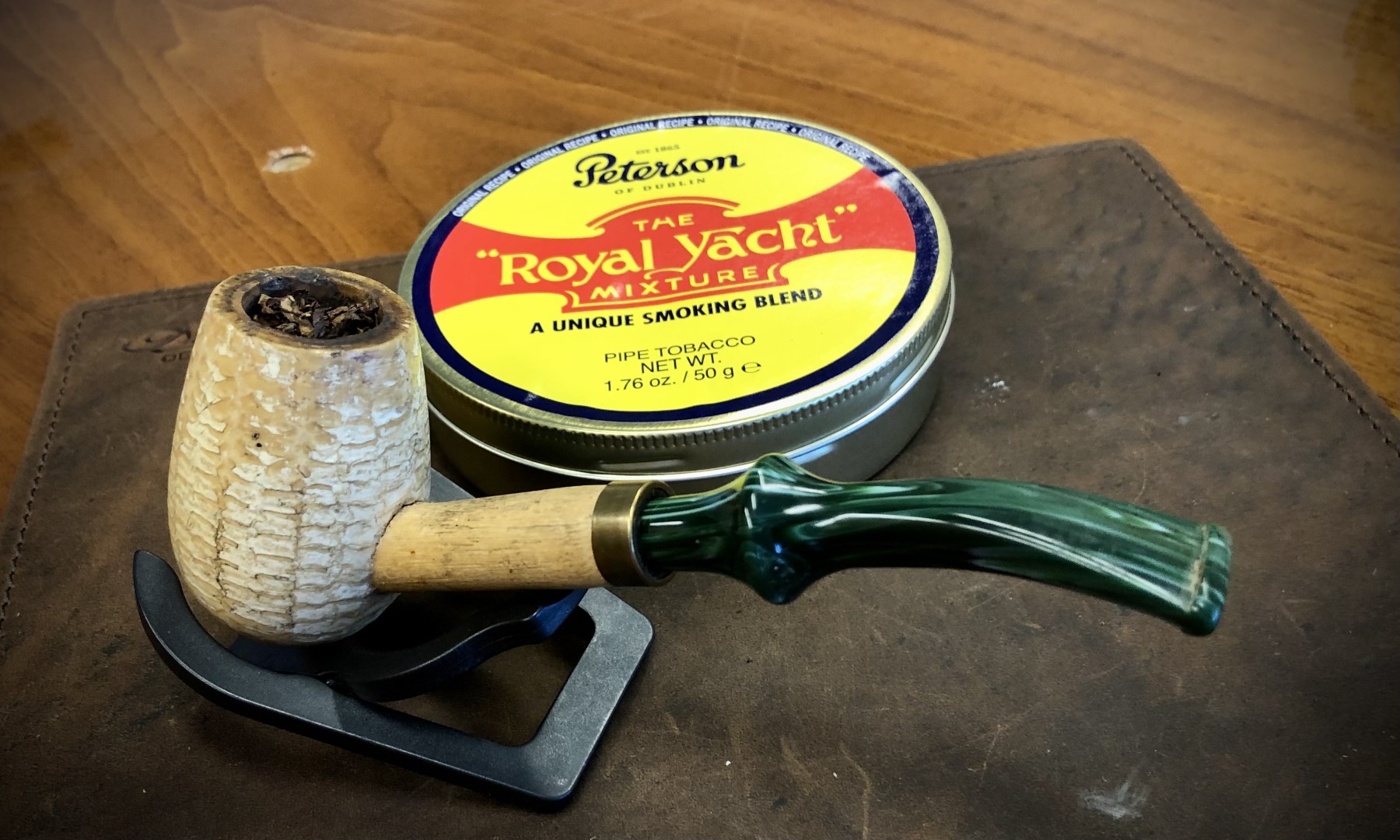 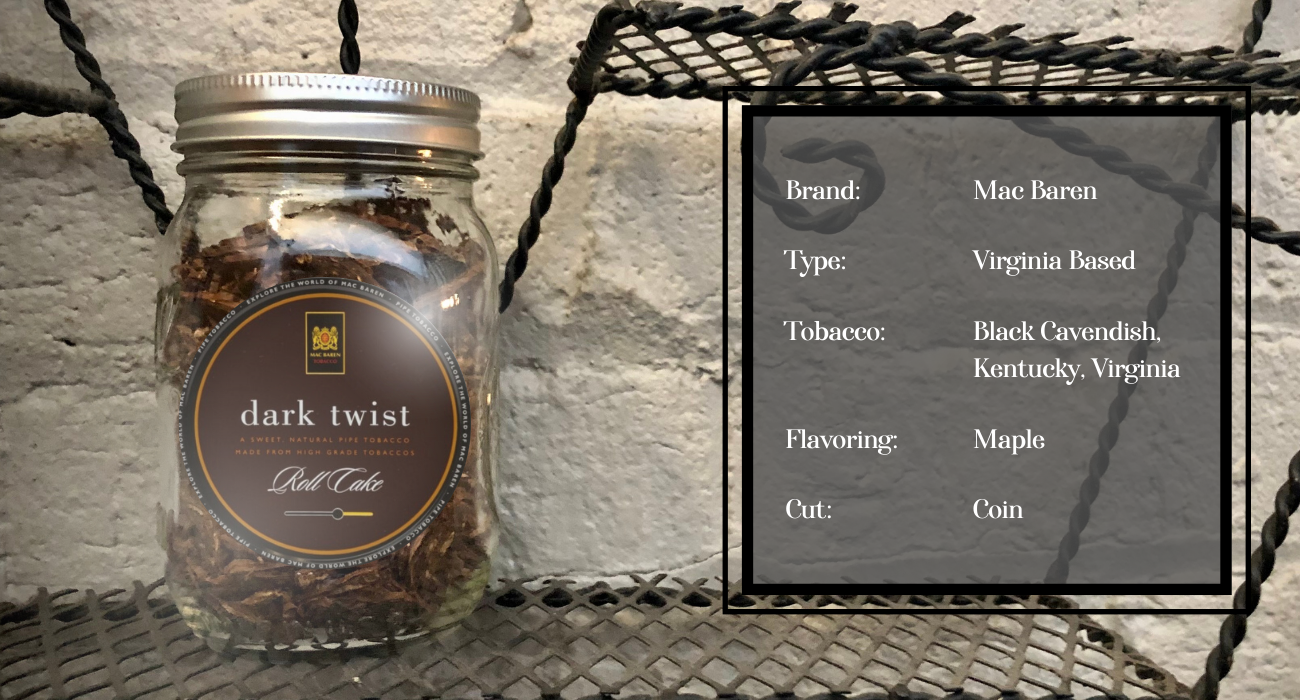 Next we have Mac Baren Dark Twist Roll Cake—another historic blend that has stood the test of time.

I'm coming to Dark Twist with the prior experience of one smoke. I was generously gifted what remained of a one pound bag, which is why the above picture doesn't feature a tin as I usually have for such blends. (But for the visual effect, I did paste an image of the Dark Twist logo on the jar, then added some glare effect in a failed effort to make it look natural. This is why I don't do graphics here.)

Anyway, after that one smoke, I was enamored and knew I wanted to explore Dark Twist for a Tobacco File.

Now, when I got the bag, it was closed but had been opened, i.e., it wasn't airtight, and I'm not sure how long it was unsealed. Feeling the coins, they're rather dry, but not totally friable. I can scrunch them up and they still have some spring, so we'll see—worst case scenario, I'll have to do a little rehydrating. 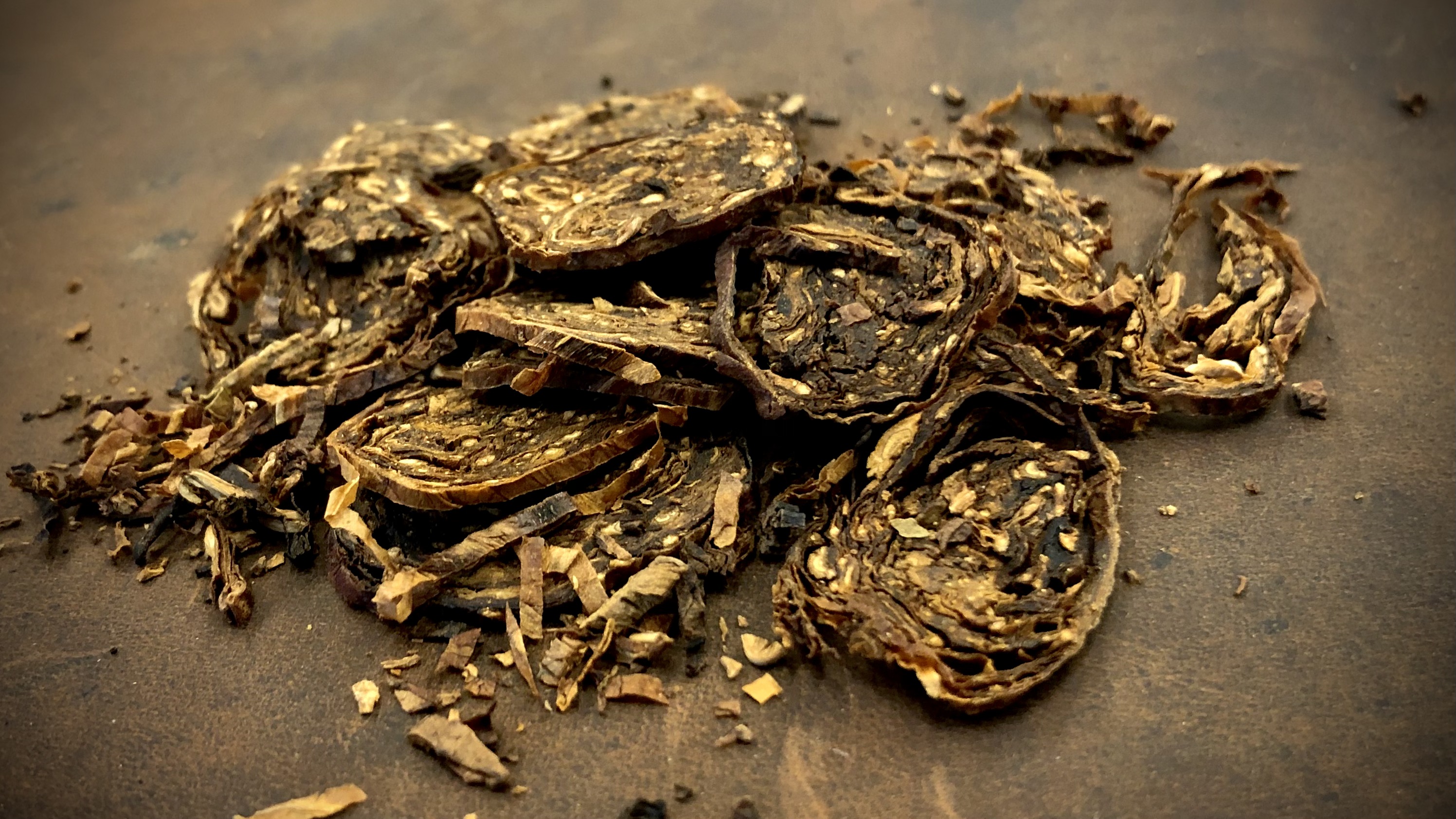 For the cut we have these small, loosely held coins. I really like these smaller ones, they're very amenable to stacking in a moderately sized chamber. An interesting aspect of Dark Twist coins is that every third or so of them contain Kentucky.

From the tin note (it's a jar but tin note just sounds right, ya know?) I get hints of wood, birch, a warm toasty note. I pack up my Lorenzetti Avitus 49. This is a new pipe for me, though not my first from the line. I got a Lorenzetti Avitus 95 Rhodesian a year and some change ago and it's been one of my favorite smokers to accompany busy hands, i.e, a great clencher. I've been frequenting my favorite clenchers quite a bit making it difficult to give 'em a good rest after every smoke, so I thought I'd add one to the roster.

From the first light I'm loving dark twist; toasty warmth like baking bread, honey sweetness, a light cocoa note. A citrus and grassy base that has a very nice way of playing against the wood and sweetness in the body. I get a bit of an herbal component, sort of green tea-like. 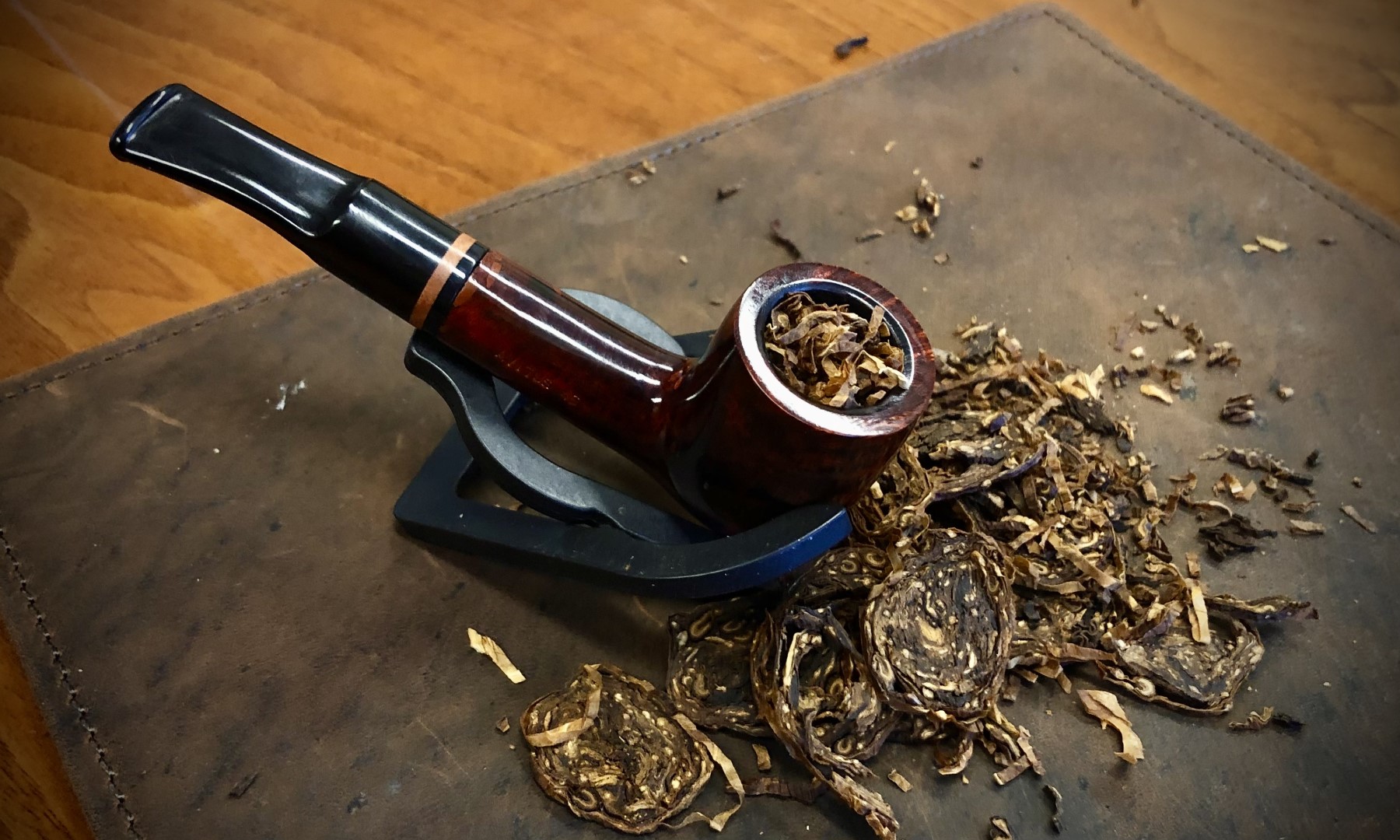 However, I'm having trouble sustaining all that. It's getting pretty hot into the second third, conjuring tongue bite. Hopefully, this will just be a matter of a little rehydrating. I'm going to keep this entry brief so that I can try to rehydrate Dark Twist and give it a few proper smokes.

So I spread some Dark Twist  about the edges of a Tupperware container with a small 4 oz mason jar of water in the center and left it overnight with the lid on and in the morning it was well hydrated. In fact, it was clear it would need a little drying before smoking—overnight may not have been necessary since it wasn't bone dry. At any rate, I let it sit for about 30 minutes before rubbing some coins out—perfect.

I now get quite long strands from rolling out the coins. I guess they were a bit more friable than I realized before rehydrating. It makes sense that a portion of the ribbons, when not broken down so much, are rather long, as whole leaf is used to wrap the rope before it's sliced. You can see what I mean with a couple strands I laid straight in the above picture. 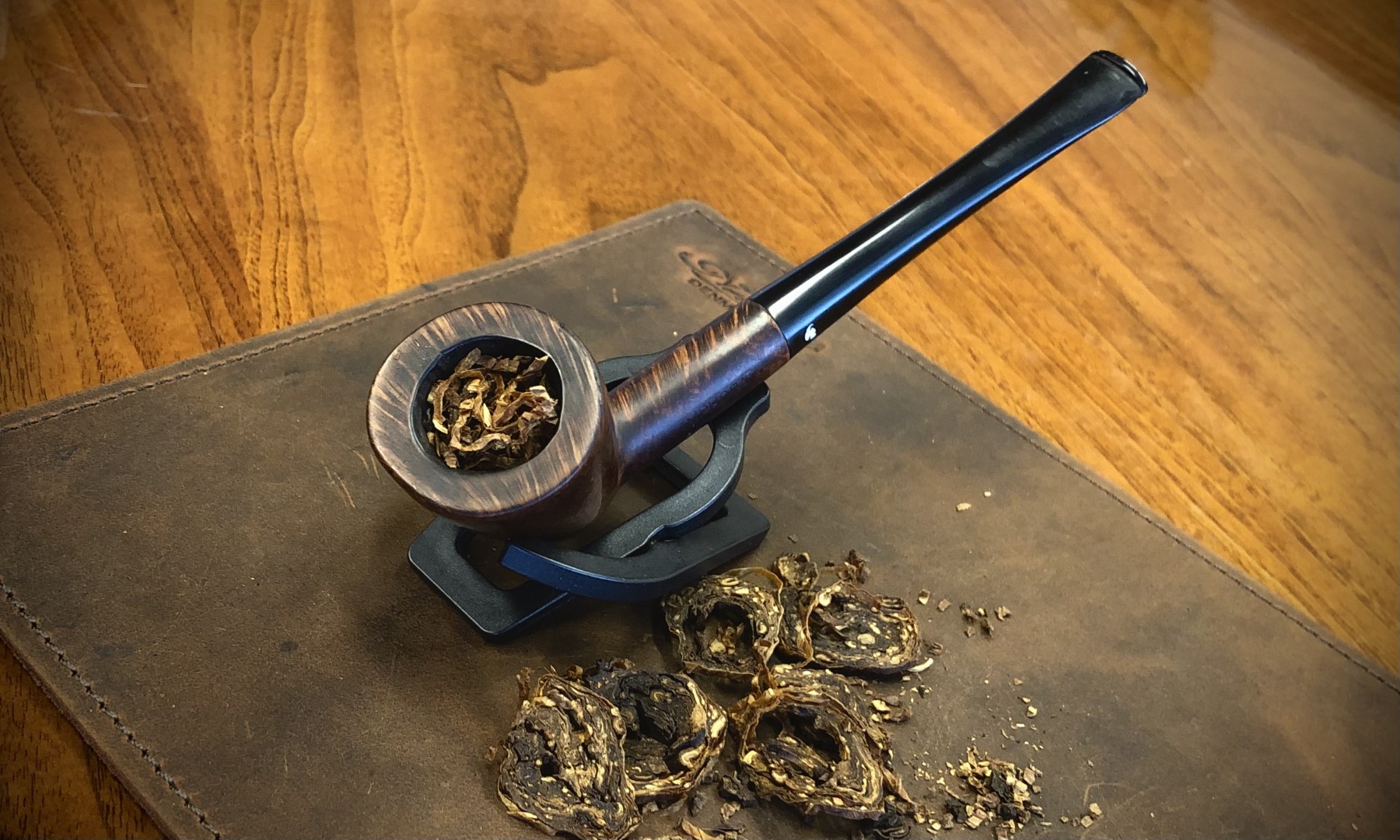 Since rehydrating, Dark Twist has been a delight—the same qualities that first grabbed my attention (and then some), without the bitey, acrid decline from dry leaf burning too hot. It was especially a joy to smoke in my most recent restoration—an Amphora X-tra 729.

Here's a little before and after—not too shabby. 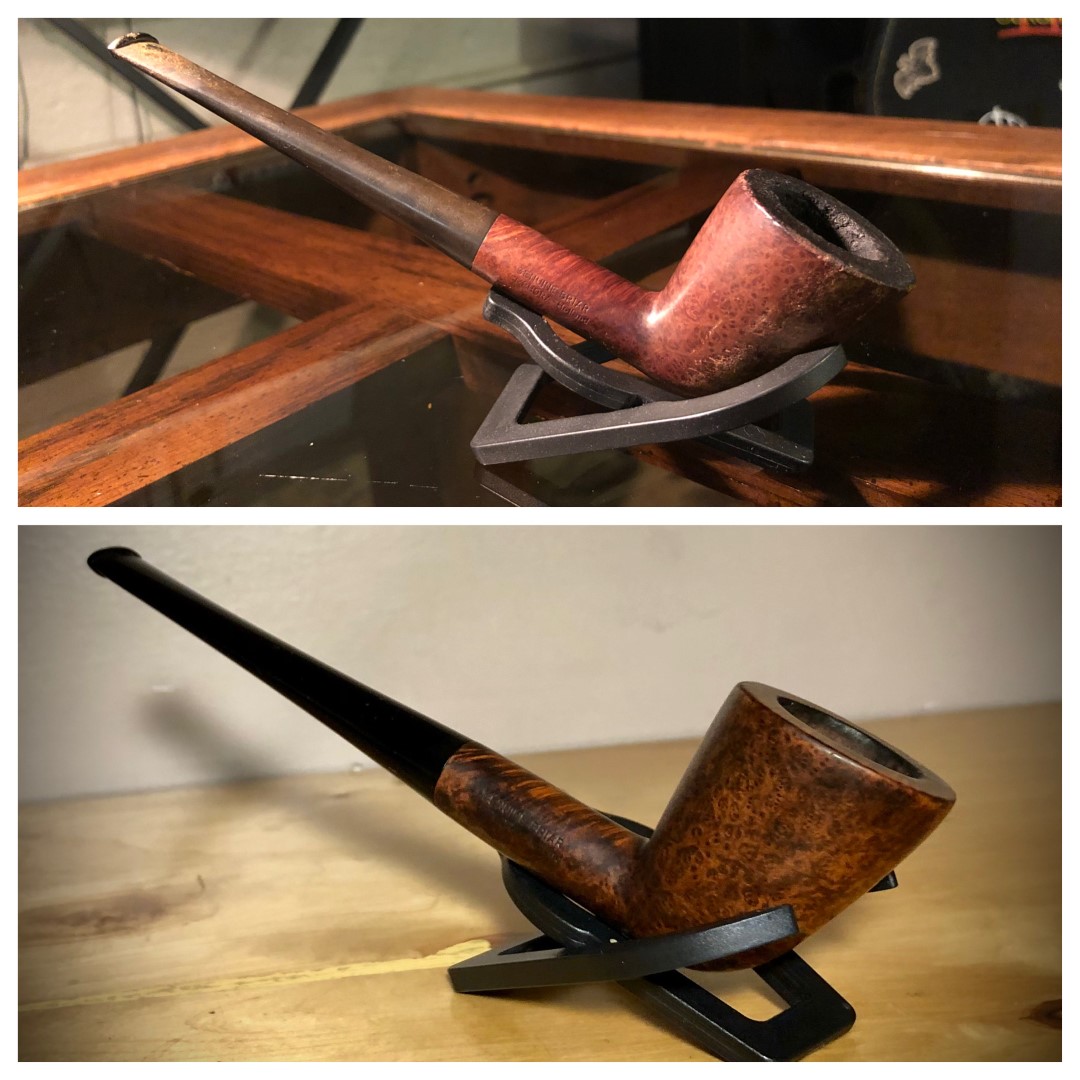 The toasty breadiness is there with a little more sweetness up front, specifically a sort of caramelized sugar from Mac Baren's proprietary Virginia-based Black Cavendish.

There's also a delightful brown sugar taste that I imagine that Cavendish is imparting, perhaps bolstered by the maple topping. I do get a hint of that topping but I'm not so sure I'd distinctly identify it as maple without prior knowledge. At any rate, the molasses sweetness and warm bready, woody flavor make for a remarkable dynamic.

Also in that sweet ensemble is lovely honey nectar that alights vibrantly on the tip of the tongue. I know I'm prating on about the sweetness of Dark Twist, but it's not that it's so sweet, just that the sweet side offers a fantastic mélange.

I think much of the Kentucky character was also a bit hidden previously as I now notice more of a floral accent and condimental spice that offers more rewarding nuance.

I'm certainly going to go ahead and rehydrate the rest of my Dark Twist, this is one to stock up on according to this palate!

This month, the 1880 Colorado Robusto from Casa Turrent was a real winner with me. I'm lucky to have a pal/coworker here who's more conversant in the cigar end of things than yours truly. One of those friends that when they tell you they tried something and loved it, you say, well, it's going on the list. And that's just what happened here. 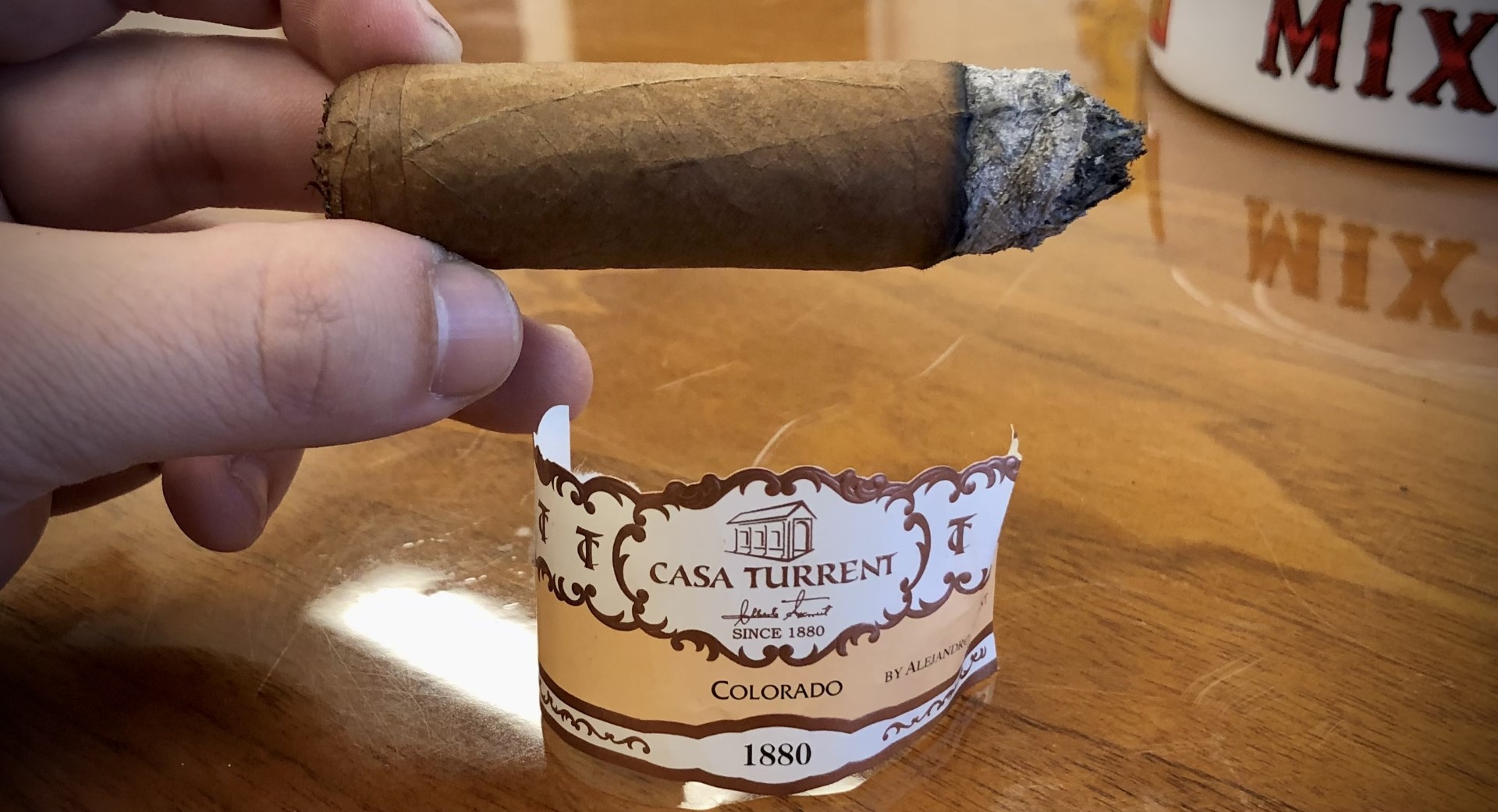 Thanks for reading friends—be it this column, or any of the Tobacco Files or blogs this last year! It's been a wonderful year for this hobby of ours, and in recognition, I think I'll do a slightly different Tobacco File for December to celebrate a delightfully smokey 2022.