Tobacco pipes have a long and fascinating history. A history the average smoker would probably consider fairly masculine. However, this is only a reflection of recent history and not a historical fact. Women have always, and still do, smoke pipes.

History of tobacco pipes for women

Smoking pipes, usually made of clay, were tremendously popular in the 17th and 18th centuries. The west was newly acquainting itself with the wonders of ‘The New World’ and with it, tobacco. Women of all classes smoked both in public and in private. Calling it “the Indian Weed”, the tobacco leaf was smoked for recreational purposes, but also believed to serve useful medicinal purposes for both men and women.

This began to change as smoking pipes began to be associated with the working class throughout Europe. By 1850, smoking was no longer a socially acceptable thing for a woman in French or English high society or in American polite society for that matter; but many ladies still smoked in private. Conversely, the Irish, Scottish and rural American working-class women continued to enjoy their pipes without shame up until the 1930s.

By the time World War I began, tobacco pipes were the dominant way of consuming tobacco. Although smoking in any form was considered vulgar for “gentle” women at the beginning of the war, by 1920 tobacco companies were actively targeting a female audience. Although cigarettes were the primary choice for smokers of both genders, many of the suffragettes in Britain and a few notable American actresses smoked tobacco pipes. This is where the trouble began.

From the 1920s to the 1960s, with a brief break for World War II, Western culture (and America in particular) drew a strict line in the sand between acceptable and unacceptable female activities. Regarding tobacco, cigarettes were fashionable and tobacco pipes were vulgar. The line was clear and most women held it.

The 1960s and it’s ‘culture wars’ represented a shift back towards women smoking tobacco pipes, after targeted marketing from brands like Butz-Choquin, Vauen and Lorenzo brought European women back to the pipe. However, the trend never latched on in America and the habit of sitting down to enjoy a quiet smoke continued to be the territory of men. Maybe, as this writer wonders, because women were too busy trying to balance their newly “liberated” choices with the traditional demands of being wife and mother. 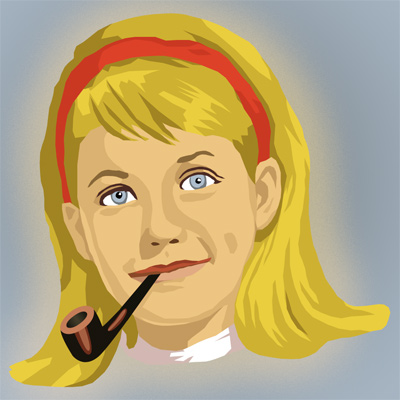 The conversations about female smokers today usually center on Hipsters. However, this fact is only true in America. European female smokers have always been there, although not always in public. As with other male-dominated arenas--think sports, professional kitchens or politics--the move towards feminine smokers has created its fair share of backlash. A reader can find a never-ending commentary in smoker’s forums as to whether or not female pipe aficionados are a good thing or bad. But the bustle matters not. That women are entering the hobby, in ever greater numbers, is a fact.

A word from a pipe gal

Tobacco pipes are not inherently masculine or feminine and neither is the hobby. It is only cultural preconditioning that determines our bias. Women enjoy smoking pipes for the same reasons men do. We don’t always smoke Churchwardens; I know I don’t, and we don’t need our pipes to be sparkly. Whatever you love about sitting down to smoke a bowl, just assume it is similar for us. After all, when the ‘new world’ was first discovered, we were all equally enchanted with the tobacco leaf and not much has changed as to why.