The history of the Nording Pipe Company begins with its founder, Erik Nording. Nording was born in Copenhagen, Denmark, and was originally educated in the field of engineering. At the age of fifteen, Nording began his work as a blacksmith with no plans at all of becoming a pipe maker. Pipes started off as a hobby and turned into a passion!

Erik Nording’s father was an engineer and blacksmith and owned several factories, a garden tool factory, and a razor blade factory. He was the one that introduced Erik to the pipe world. He showed him the ways of pipe smoking from breaking up the tobacco, packing the pipe, and sitting back relaxing with a smoke. Unfortunately, he lost his father when he was only 16 years old. His mother tried to persuade him not to smoke tobacco at all and made him smoke a few cigarettes to prove a point. Well, it didn’t work, and his mother allowed him to smoke only one bowl of tobacco from his pipe a day and only at his home. She thought is was much better than him smoking cigarettes as he didn’t inhale the pipe tobacco smoke.

Nording had a small collection of pipes, and would often take them to be repaired in a small shop in Copenhagen called W.Ø. Larsen while in school. Skovbo at W.Ø. Larsen, the man who performed these repairs expressed his interest to Erik in opening his own pipe manufacturing business. Knowing Erik’s knowledge of engineering, this Skovbo asked Erik if he would be willing to design pipe making machines for him. Erik agreed and got straight to work. Not having any money, Erik had to borrow money, about $200, from his mom to get the equipment together. Once these machines were finished, however, Skovbo had no money to pay for them and told Erik he would pay him back once his pipe business took off. Erik didn’t like the agreement that he would have to wait and decided he’d rather keep the equipment and make pipes himself. After some thought and discussion, the two men decided to go into business together in 1963, and so SON Pipes was born while Erik was still in school.

Like the Ardor name, SON Pipes is the combination of Skovbo and Nordings name. Skovbo was the person behind the designs of the pipes while Erik and Skovbo both crafted them. The partnership didn’t go so well and SON Pipes only lasted for a couple years. Erik wanted to carry on the pipe making company so he did. Though legally he couldn’t use the SON name, he continued to make pipes. And Nording Pipes was born! There are a few SON Pipes around but are very hard to find. We tried tracking some down with no luck!

To get his company started, Erik would go from pipe shop to pipe shop asking if they had any customers that were looking for unique freehand pipes to be made. And they did. This brought great success to Nording and his brand. His brand quality quickly spread outside of Denmark and in 1967, he hired his first employee.

Throughout the years, some of the best pipe makers in the world been through his shop. Just to name a few:

Most of the Nording pipes were all freehand shapes with different grades. He would grade them off the briar, cut and end shape with an A - F grading scale. An “A” grade was the best and an “F” grade was the least best.

For the last forty years, Nording Pipes has been thriving in the industry. Today, the company produces many pipes every year. Erik himself is still involved in the pipe making process, doing a few a year himself. Nording Pipes offers a wide selection of uniquely carved pipes in a variety of shapes, sizes, styles, and colors, leaving something for every smoker to choose from.

They even offer the Nording bobble head pipe holder!

Over the years they have put out a lot of great styles, shapes, and colors.

Here is a small sample of some of the pipes Nording offers:

The Abstract pipes have deep channels around the bowl of the pipe with a smooth top. These come in various shapes and colors.

The Black Smooth pipes exactly what they are named; black and smooth! They have an ebony glossy color and smooth finish. The acrylic stems are handmade in black with white lines through them.

These are the classic Churchwarden length. They come in several bowl shapes and finishes such as rustic and the Seagull finish. The length on these is around 10.5 to 11 inches long. 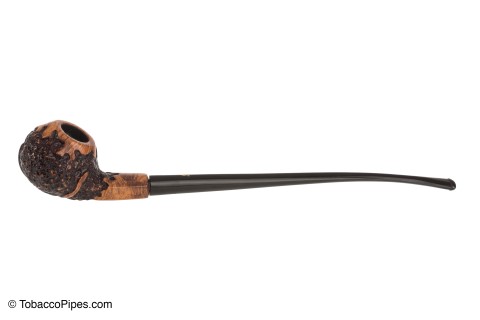 Fantasy pipes are a freehand pipe and are often finished in both a smooth and rustic finish with deep crevices in them. As you see in the pictures below, they come in many colors and no two are alike.

There are several color variations of the Grain style pipes. There is a black, brown, burgundy, orange, red and virgin series. All of the Nording Grain pipes are smooth and like all his pipes, are one-of-a-kind.

For the Hunter series, every year he releases a new focus for these pipes. One of his most recent is the Hunter Elephant. Some in the past have been the 2011 Bear, 2012 Ram, 2013 Red Fox and, 2014 Crocodile. These come in both rustic and smooth.

The Moss pipes are offered in a combination smooth and rustic finish. The stems for these pipes are made from vulcanite.

The Oversize series have some of Nording’s largest pipes in it. Offered in both a rustic or smooth finish, each one has a beauty to it. If you like a larger bowl, these are the pipes for you.

The Point Clear pipes have channels like the Fantasy series, but not as deep. These pipes also usually come in a light color.

This is the ultimate set for a pipe smoker or pipe collector. The Private Reserve sets are hard to come by. In this set is offered a beautiful briar pipe and a pocket knife.

Looking for the ultimate hand or at least the ultimate pipe in your hand? The Royal Flush series comes in the Joker, Ace, King, Queen, and Jack. The Joker being the most expense and the Jack being the least.

Nording’s Rustic pipes have a rustication at the base of the bowl and more of a smooth finish at the top of the bowl.

The Seagull pipes are meant to have a feather-like finish to these pipes. They have a dark stain that really makes the “feathering” stand out.

Each one of these pipes shows off Nording signature of approval. On the side of the bowl, you’ll see his famous John Hancock. These are offered in several different colors and multiple finishes.

There are several tobaccos offered under the Nording tobacco brand blended by the McClelland Tobacco Company. His Hunter series tobacco has several blends that are named after hunting dogs.

Some of the blends are:

A blend of Perique and Virginia flake.

An English blend of Latakia, Oriental, and Virginia tobaccos.

This ribbon cut blend has Cavendish and Virginia tobaccos. This is an aromatic blend with a liquor flavoring.

Erik’s most amazing pipe is not actually a pipe you can smoke at all. It is a piece of art - a collection of hundreds of pipes put together to make one very large pipe.