Hop into the future of pipe smoking with Morgan Pipes

Chris Morgan is a veteran tobacco pipe maker and a young artisan creator. It’s a combination of the traditional and new ideas that leaves you wondering what might be next.

Morgan Pipes are well known in the American market. But Chris Morgan the man is something of an unknown personality. He has relationships with many other makers and smokers, but you won’t find him at a pipe show. Chris won't be traveling the country anytime soon. He prefers, instead, to keep close to home and to his shop, doing what most inspires him: creating. 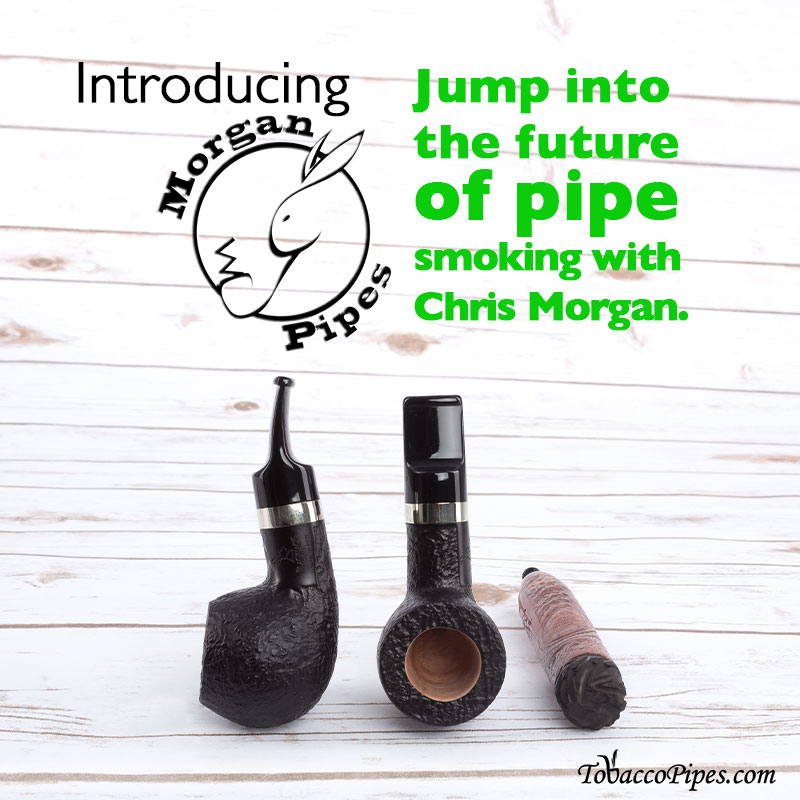 Morgan hails from the same area of Northern California as many of the world’s tech giants. The tech world's influence over his style isn’t obvious at first, but it is there. The entrepreneurial spirit, fueled by possibility and something in the California air, finds its way into every story Chris tells.

His stories and philosophies kept me furiously scribbling notes throughout our nearly four-hour conversation. When you are talking with Chris Morgan, you get the feeling you're standing between two places--both sides accessible, if only you have the right guide. It's one of those special moments that remind a creative person how many options there are. Chris seems to know this place well and has built a life and a business which allows him to freely explore it.

Read on for more on my interview with Chris Morgan…

An Interview with Chris Morgan 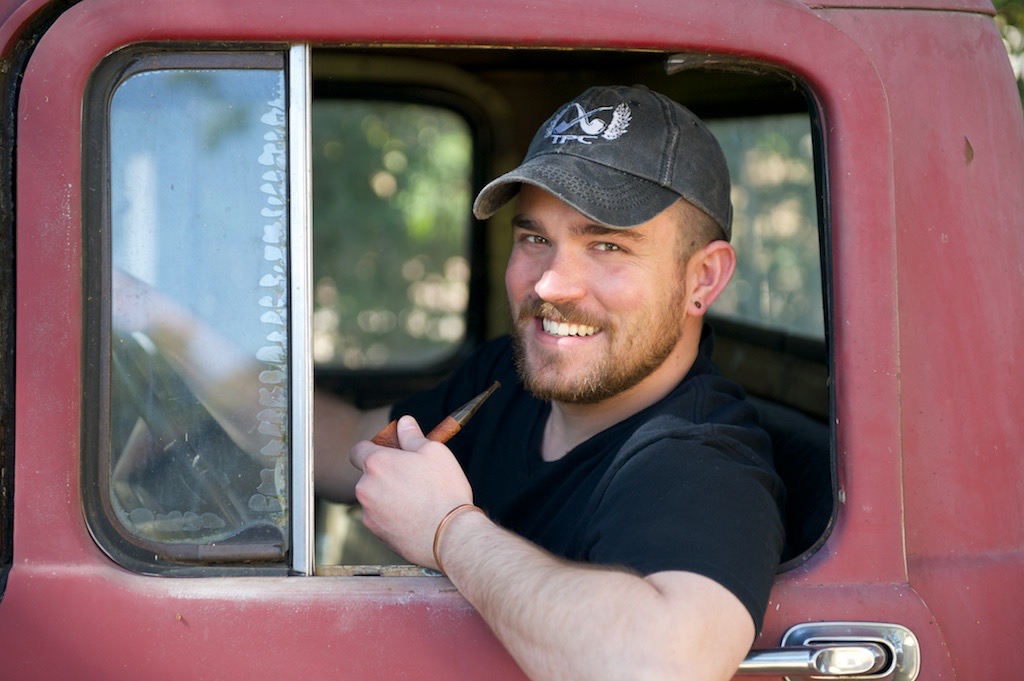 Chris: I’ve been making pipes for about 10 years. Living in this area, tech was the big thing. But I’ve always found myself drawn to the outdoorsy stuff. I am an Eagle Scout, a fan of scruffy facial hair, and like to see the stars at night. That’s how I grew up and how my family is.

While I was in high school I took up ceramics, mixed media art and sculpting. I’ve always liked working with my hands. Eventually, I saw that this was just shaping materials. I discovered that woodworking is just the opposite. It’s a subtractive art, but on the same plane. The transition felt natural.

I started smoking a pipe to do something with my friends while they were doing stuff I didn’t want to get into. But it was just a passing the time sort of thing.

We had a pottery teacher tell us that we would go to the principal’s office if we made pipes out of our clay. So of course, we spent a lot of time figuring out how to disguise our pieces and still make them like pipes. Technically, that was my first experience with pipe making, but it would be a few years before I came back to it.

When I went to college I had some trouble with anxiety. I didn’t know where I was going or like what I was doing. It took me awhile to find my way out of that. Pipe making helped me find a place in the world that felt right for me, even though it was really different from what everyone around me was doing. 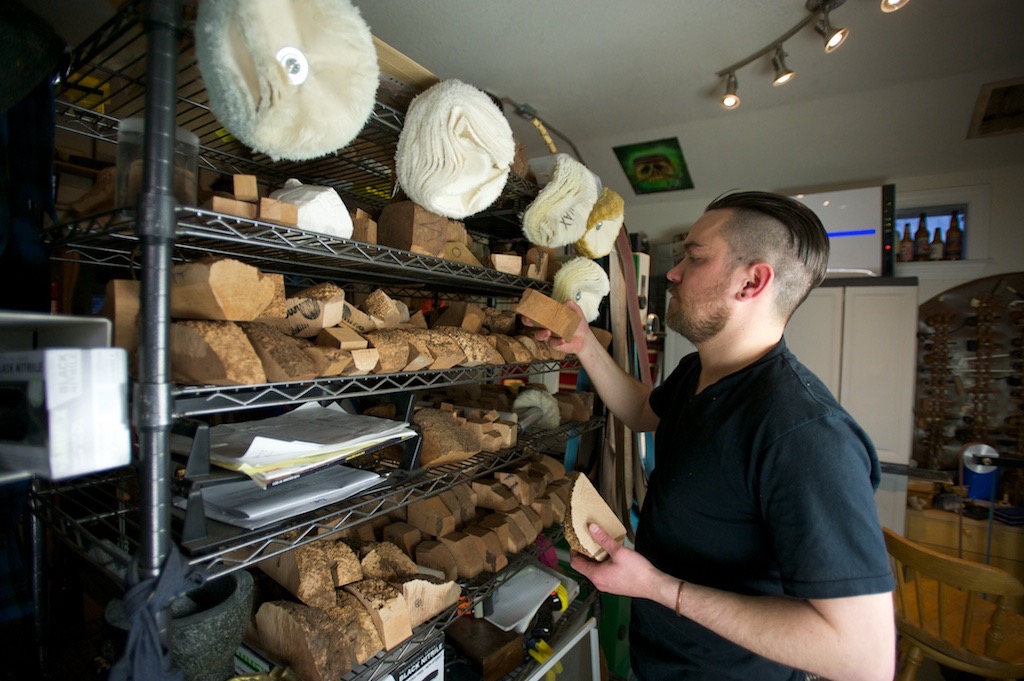 Working with my hands, turning a block of wood into something useful and beautiful, is a meaningful process. I picked up some Pimo briar blocks and a kit. Then I started working.

At first I bought a lot of kits. After awhile I met Steve Norse and started buying pre-drilled blocks.

When I started, new guys didn’t do everything themselves. It took me a year or two to get into that.

Learning to make pipes was a different process when I started. YouTube and Instagram didn’t give you a community the same way they do now.

I found pipe maker forums and made some connections. Over the course of a few years, I built up my skills and started shaping my own brand. 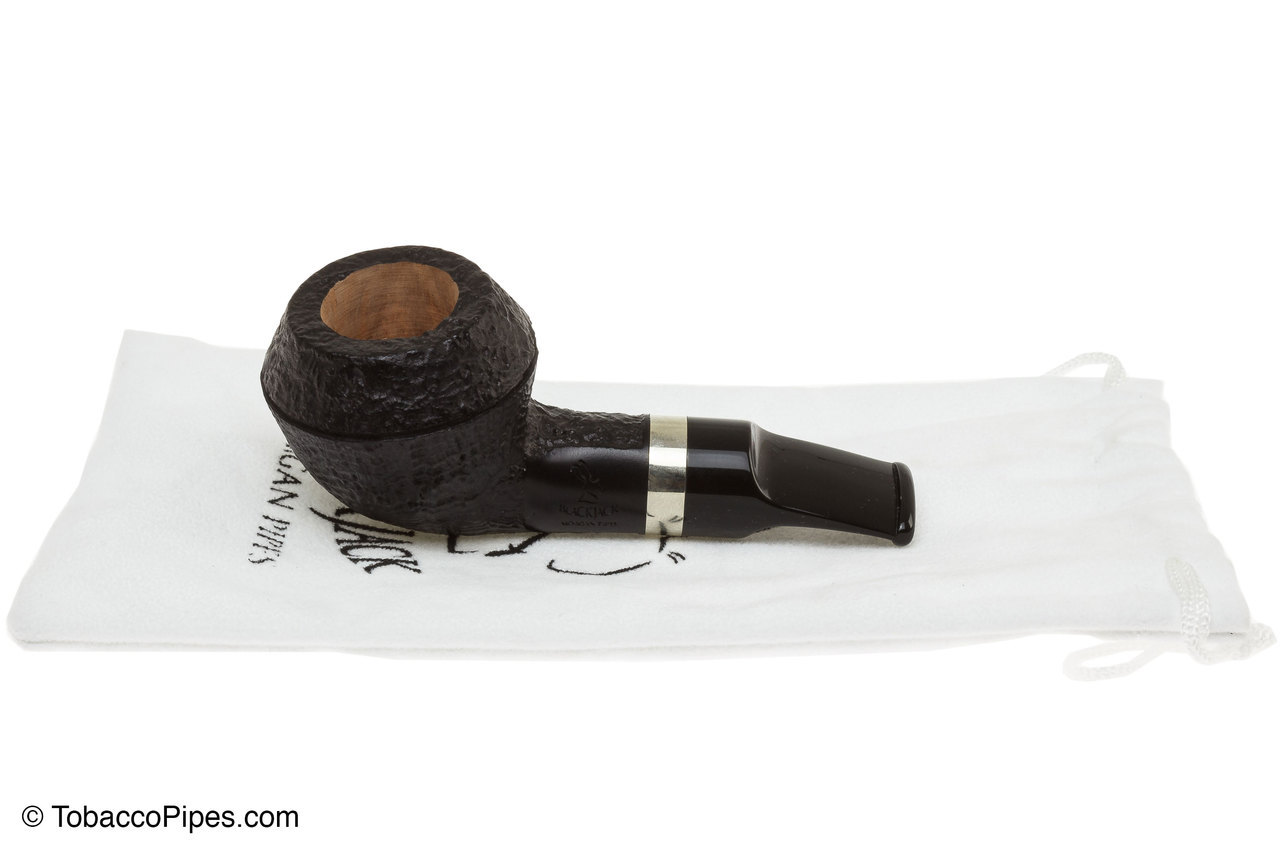 Renia: Many of your newer pipes are a departure from the higher end stuff you are known for. What inspired the shift?

I spent eight years focusing just on handmade pipes. There are a few challenges to making pipes that I feel like I’ve wrapped my arms around. I’m certainly not a master, but I felt like it was time for another challenge.

The Blackjack pipes allow me to reach more people with my work. New smokers and those who like to smoke while they are working need an alternative to the high-end pipes. I can’t reasonably handmake a pipe that everyone can afford, but I can design one.

Through the process, I’ve learned a lot about teaching, engineering, and designing for others. It’s been an eye-opening and valuable experience for me.

Renia: That makes complete sense. After working with both machine-made and handmade pipes, what do you think makes a good pipe?

Chris: Well, there are plenty of different ways to look at what makes a good pipe. None of them are necessarily wrong.

There’s a big difference between a machine-made everyday smoker and an artistic masterpiece. Neither is “better” than the other. It depends on what you want the pipe for.

One of the cool things about having Blackjack and Bones pipes is that I have something for everyone. Whether you like a high-end pipe or are new to smoking a pipe. While I was creating these lines, I learned the only thing that matters is that you like the pipe and it smokes well.

I brew beer at home, and it’s a similar thing. 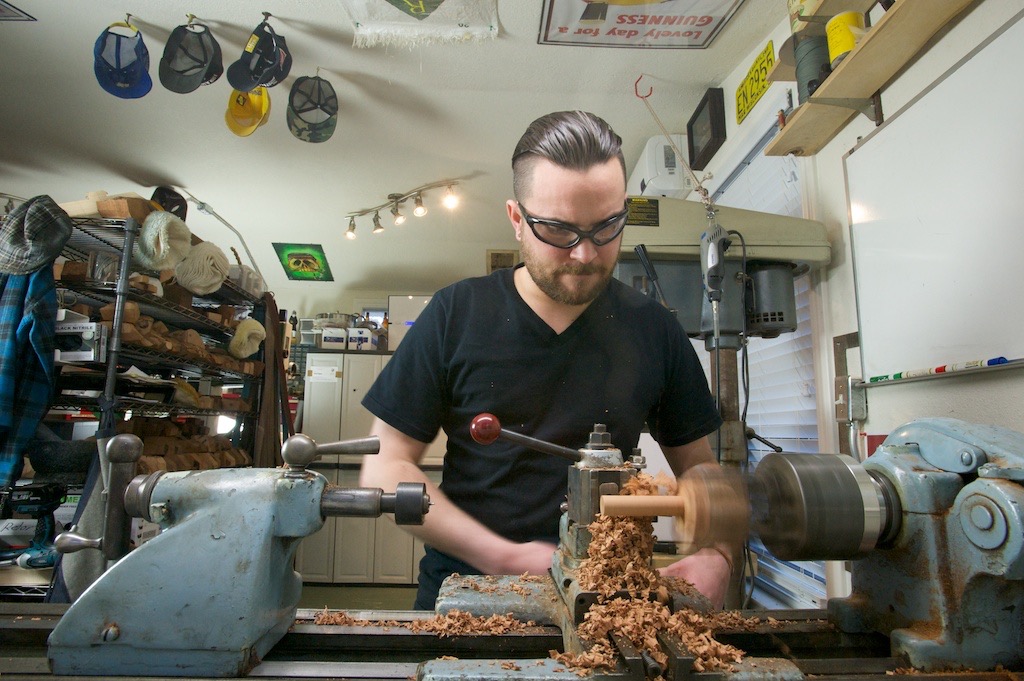 I just like the taste of beer, but you can make it as complicated as you want to. Everyone can have different tastes and like what they do. No one thing has to be right.

Maybe a baker is a better analogy.

You can go to a bakery and order a $10,000 wedding cake. But you can also just buy a cookie. I want my business to be like that, accessible to everyone who has a craving for something to break up the day a bit.

Renia: You have a well rounded product line, how do you balance the business side with the fun hobby side of pipes?

Chris: Basically I have two rules: 1) Don’t be an asshole; and 2) Treat people how you would want to be treated.

If you do those two things you can have a lot of fun and make a decent living...at least that’s how it’s worked out for me. 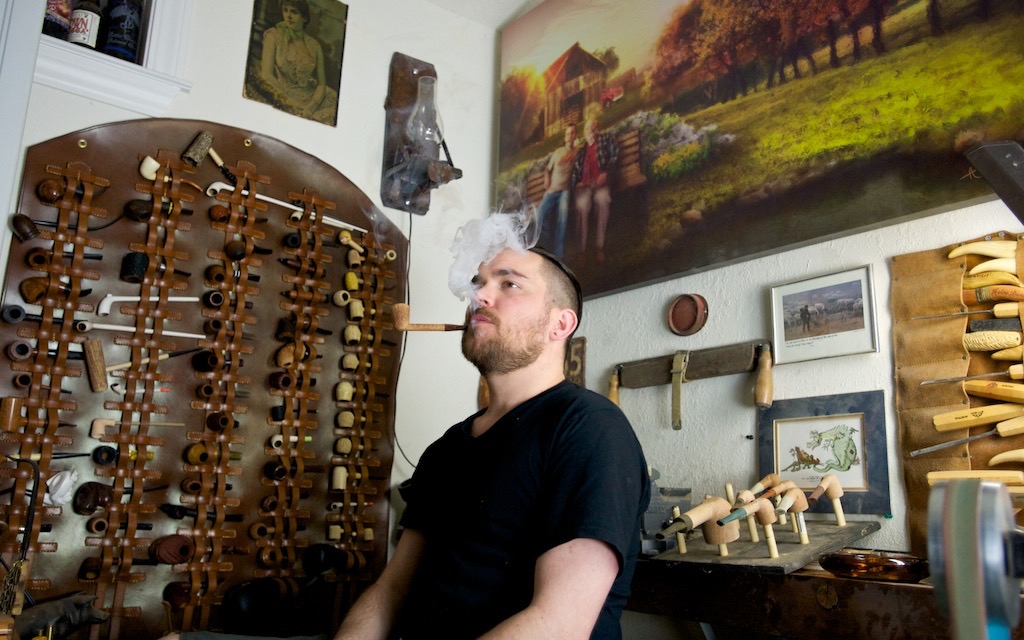 Renia: That’s a good philosophy for being happy! Of all your pipes, do you have a favorite?

Chris: I don’t know if I have a favorite, but I have one I’m the most proud of--The Calabashian Smoke Box.

That pipe was an act of love. It’s steampunk and intricate, but completely smokeable.

The Smoke Box came about as a gift for a friend. He has a disability that makes it impossible for him to smoke a pipe in the regular way. I wanted to make a pipe he could actually enjoy.

While I was working on his pipe, my friend was working on a special picture for me and we kept upping the ante. By the time we finished, we had both completed epic pieces that were thousands of dollars worth of work.

I spent over six months making that piece. Every single thing, except the compass casing on the top, is handmade. 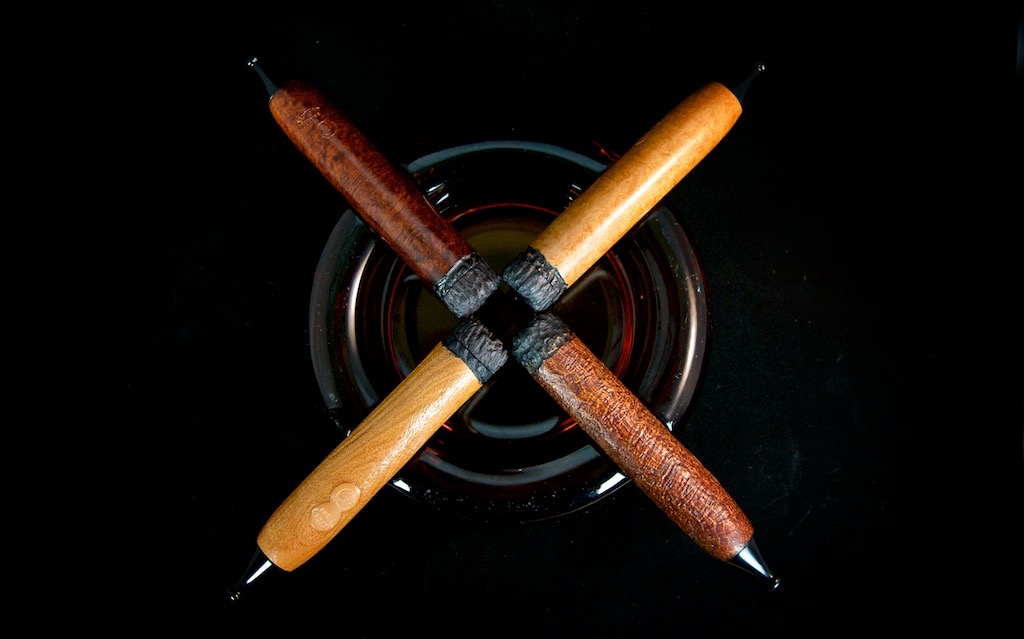 Renia: You’ve created memorable pipes, innovated the industry with your Briar Cigars, and brought two more affordable lines to the market. Yet you’re only in your early 30s. Do you feel like you’ve ‘made it’?

Chris: Never. There’s always another challenge. I look at my life and feel both confident and lucky.

My brand is internationally recognized in the pipe world. I have a distribution network all over. Someone can buy Morgan Pipes in Europe or Malaysia. I am able to live a pretty decent life in an expensive area, but I have a lot to learn still.

Recently I’ve decided I might like to learn about blacksmithing. I make pipes and beer. I’ve worked at a tech startup. Who knows what might still be in the future.

There is always something to learn. 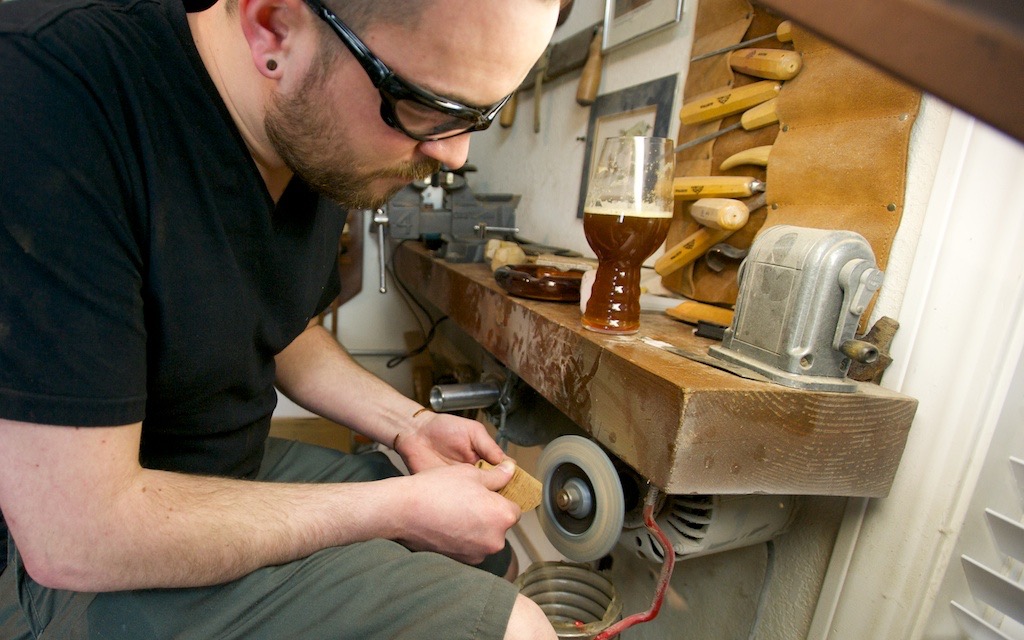 Renia: Do you have a mentor/teacher or are you self-taught?

Chris: I am mostly self-taught. Although I am, of course, influenced by others.

Renia: What other carvers and/or artist influence your work?

Jim Deshane and his incredible aptitude for learning.

Scott Harris of Sparky’s Pipes is a close friend and incredible carver.

Hiroyuki Tokutomi’s organic shapes and designs inspire me with their uniqueness.

There are others, friends and masters, that I’m sure I am missing. I think my style is unique, but I take bits and pieces of influence from all over. 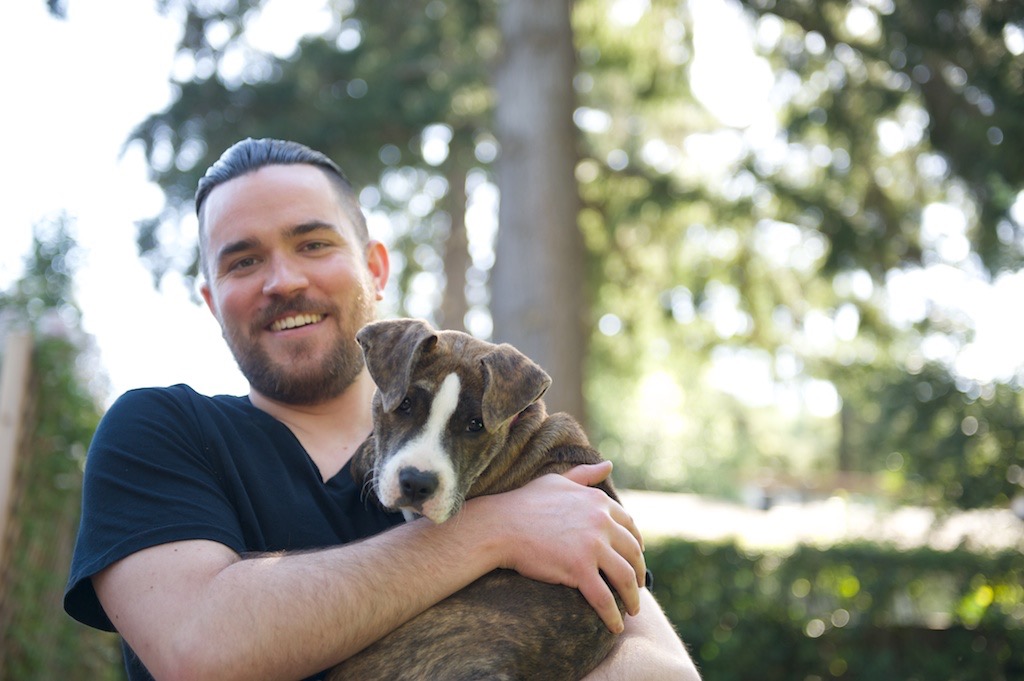 Renia: On the topic of inspiration, what does your process look like? Are you spontaneous or a planner, when it comes to your work?

Chris: I like to stay up late at night watching Harry Potter and sketching. My workdays look a lot like most people’s days off. I do overnight work a lot. So, I guess I’m more spontaneous than most. 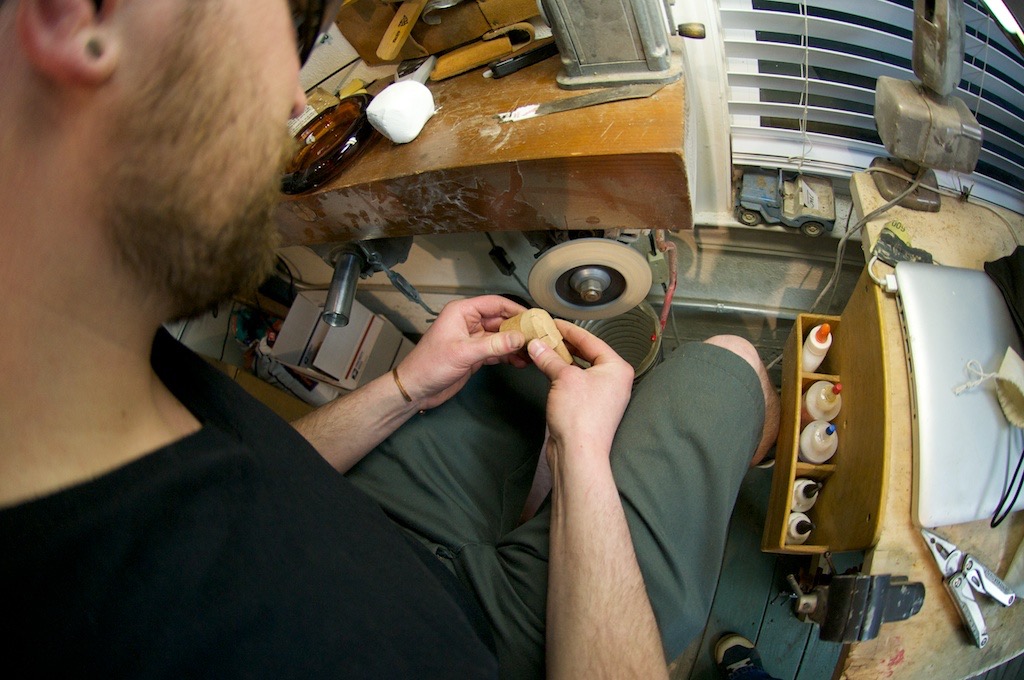 Chris: I try to respect the classic shapes, while still putting my own spin on them. Although I admire some of the more organic stuff, it’s not the way I work.

If you’re going to break the rules, you need to have an idea of what they are first. That’s why I think new pipe makers starting with kits is a great way to get going. You learn a little bit about what you don’t know that you don’t know.

I live in the same town as some of the tech giants, I don’t think I can help breaking with tradition a little bit. Hopefully, I’m striking a good balance between respect for the classics and my own style.

Renia: We think you have done a masterful job Chris, and we’re honored to have Morgan Pipes here.