You know those companies so established that their name becomes synonymous with the industry itself? John Deere is to tractor, as Kleenex is to tissue, as Google is to search. We might add another name to the group: Peterson is to pipes.

The story starts in 1874. Dublin, Ireland. Grafton Street. A German tobacconist named Frederick Kapp opens up a storefront selling his custom meerschaum and briar pipes. Kapp is barely into a year’s worth of labor at the new place when lightning strikes twice: Kapp meets the Sherlock to his Watson. The man is Charles Peterson, a broad-shouldered Latvian craftsman with an enviable mustache, who joins Kapp’s operation with gifted hands and ingenious capacity for shaping not only briar, but the future of pipe craft itself. 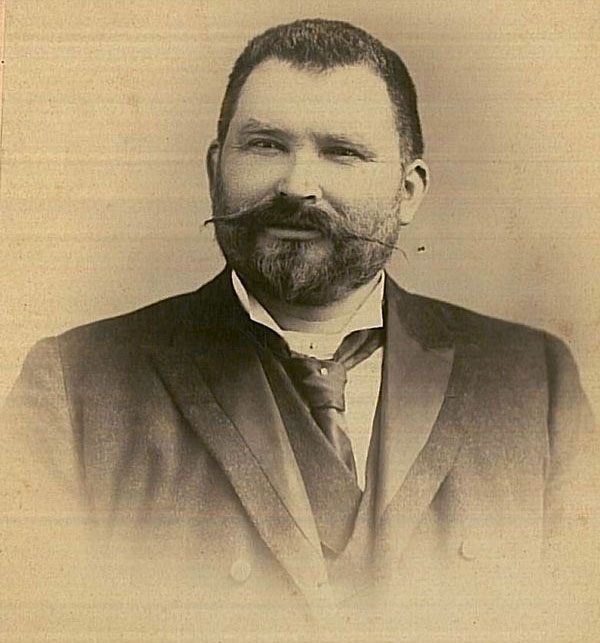 How many pipe makers can add a patent to their legacy? How about two patents? There’s at least one man in that market, and it’s Charles Peterson. Fast-forward fifteen years into the Grafton Street tobacco shop and there’s Peterson, still shaping, still repairing, and still tinkering. You have to admire a mind like that; steady at the helm of his work, but with eyes on a new horizon. The result of Peterson’s efforts was the now-famous System pipe, “a certain new and useful improvement in Tobacco-Pipes.”

The System pipe, still in production today 130 years after its innovation (now that’s staying power!) relies on a special bore into the shank that draws moisture away from the smoke. The result: an increased, more-robust flavor. Peterson’s efforts paid off—he was awarded gold medals—for “Best Finished Pipe” and “Best Patent Pipe”—at an international exhibition for the tobacco trade in the 1890s. Riding this wave, Kapp & Peterson brought Kapp’s son, Alfred Henry, into the fold, and the three piloted their retail storefront and lounge into an international exporter of their exceptional pipes.

History has a way of making the labor seem easy. But as any business owner knows, there must have been many after-hours evenings in that smoking parlor where the three indulged in their pipes (and surely a few pints), pored over the books, and planned and plotted for Peterson’s advance in the global market. Whatever choppy waters the trio weathered, their enduring success is evident.

And it’s a good thing for us they landed the ship. Today, Peterson stands as one of the most reputed and reliable pipe makers in the industry. From their factory in Dublin, a team of dedicated craftspeople undertake each step of the pipe-making process, from briar selection, to shaping, to stamping, to finishing. Rooted in established maker practices, the Peterson pipes of today prove worthy of their patrimony.

Remember that second patent? Peterson’s innovation didn’t stop with the System pipe. There’s also the P-lip, an advancement in the mouthpiece that angles the smoke upward toward the roof of the mouth rather than directly outwards the tongue or back-cheek. Used with proper cadence, the P-lip reduces tongue bite and allows for a more atmospheric deploy of smoke into the cavern of the mouth, which clarifies flavor notes in this author’s opinion. Beyond functional improvements, Peterson also developed its own blends of tobacco, lines of elegant accessories, and the highly-sought after Christmas Pipe Collection.

Let’s talk XMAS here for a minute. Sure, it’s only July, and we’ve got a couple other holidays running interference before the most wonderful time of the year. But there’s a reason we need to put on our jolly hats and think towards December: in just a few short weeks, Peterson’s limited-edition 2020 Christmas Pipe Collection hits the shop.

We all have those things we collect; the elusive, exclusive, and limited; those objects of beauty that bring warm satisfaction every time we remember we’ve got them safe and sound. Maybe your thing is classic cars, maybe rare first edition books, maybe mint comics, maybe baseball cards. But hey, if you’re here, there’s one thing you’re collecting for certain, and that’s pipes. Don’t miss the opportunity to jump on Peterson’s Christmas Collection and start a new holiday tradition; in addition to all of the hallmarks of style and integrity we know and love, the limited-edition collection features unique and iconic elements in gorgeous classic shapes. Let’s talk details.

Distinct and refined metalwork on the classic silver Peterson band? Check. Themed collections with tasteful lucite stems (or vulcanite if the aesthetics demand it). That too. Shapes from stout and sturdy to classic and sleek, all with special details that make the pipes a necessary addition to any collector’s portfolio? That’s a resounding yes.

This year’s Peterson’s Christmas Pipes arrive in August. Don’t sleep on it—limited editions move quick. Sign up for our email newsletter to get first dibs. And for now, let’s take a look at some favorite Christmas Pipes from year’s past to grease the gears.

Maybe you have a dozen Peterson pipes in your collection already, or maybe you’re just now shopping for your first. That’s the beauty of a pipe maker who calls on over a century of quality and process improvement at such an attractive price point. And hey, if you’re enticed by the storied reputation and exquisite shapes of Peterson, brace yourself to join a legendary group. We’ll turn our lens on a couple storied authors (just two for now, just to whet your whistles) but the buck certainly doesn’t stop there.

“It is quite a three-pipe problem, and I beg that you won't speak to me for fifty minutes.”
― Sir Arthur Conan Doyle, “The Red Headed League”

Excepting that three bowls in fifty-minutes is only acceptable in a murder-solving pipe smoking cadence, the greatest sleuth of all time needs no introduction. Of course, it was Sir Arthur Conan Doyle who penned the time-spanning mysteries that, along with Poe, established the detective genre as we know it. But if there’s one character synonymous with smoking a pipe (Gandalf excluded), it’s our dear, maddening, savant investigator, Holmes.

In order to honor the Patron Saint of Pipes, Peterson has released a collection of tributary pipes under the Sherlock Holmes Collection. With each pipe paying homage to some person, place, or artifact in Doyle’s oeuvre, there’s no sense laboring over your confusions alone; why not bring along one of the greatest detectives of all for the ride? 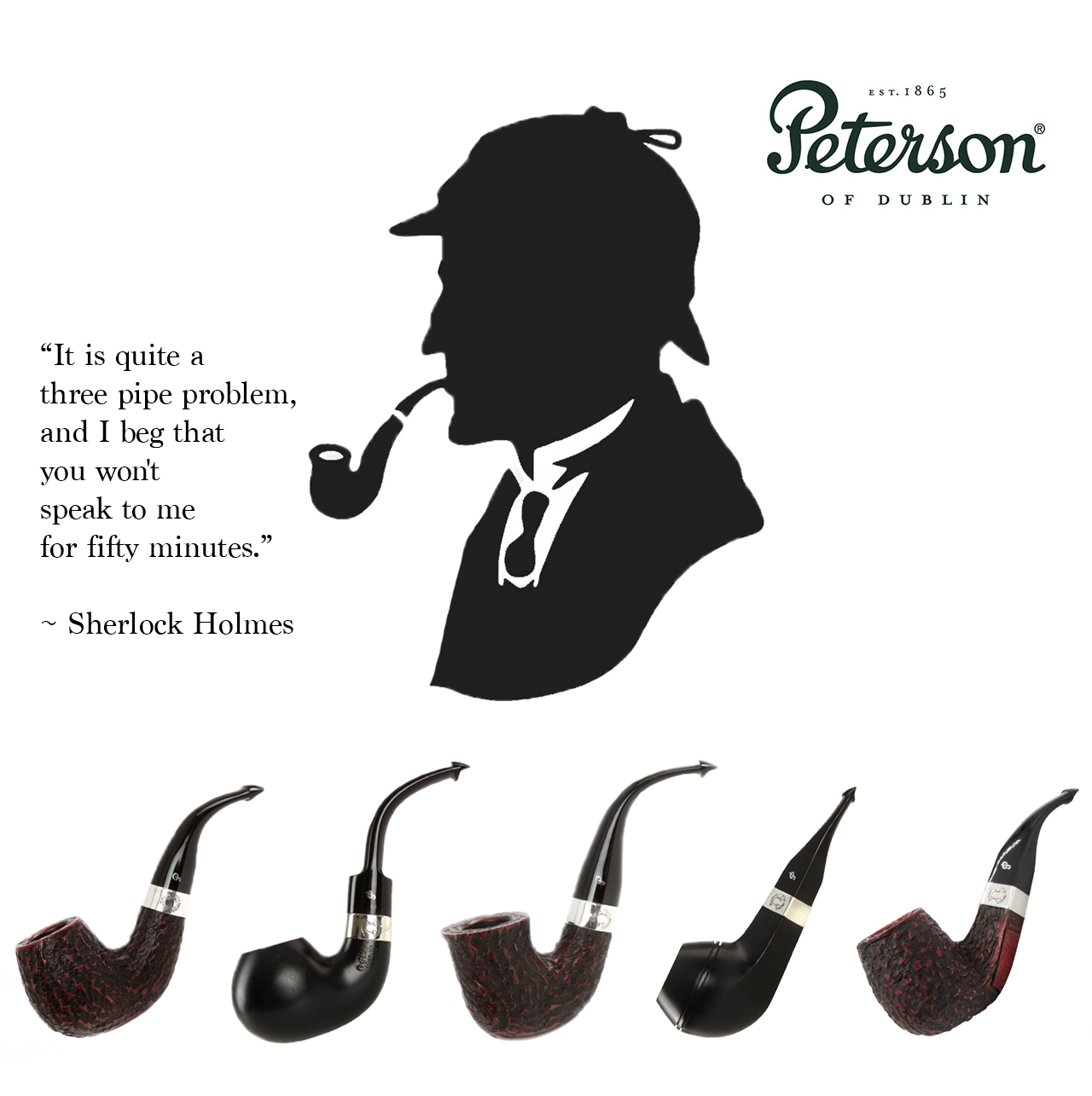 A glass of brandy lifted to Peterson for honoring Sherlock Holmes and Sir Arthur Conan Doyle with the Sherlock Holmes Collection. Hand-stamped on the silver band with a silhouette of Holmes himself, smokers can puzzle out their life’s mysteries in a variety of exquisite shapes and finishes.

Still waiting for Godot? Me too. There’s simply no one like the Irish writer, Samuel Beckett, a man who wrote paradigm-shifting works of experimental literature (Beckett also used to drive Andre the Giant to school, but that’s another story for another day). Suffice it to say, Beckett had superb taste in literature, chess strategy, and pipes, and so it’s no surprise the auteur smoked Irish and selected a Peterson. In fact, in Act I of his eponymous play, Waiting for Godot, the character,Pozzo, laments the disappearance of his beloved pipe:

“Pozzo (on the point of tears). I’ve lost my Kapp and Peterson!”

I think Pozzo would have smoked something stubby, like the Peterson Sherlock Holmes Hudson Rustic Plip.

Cheers to you, Beckett! 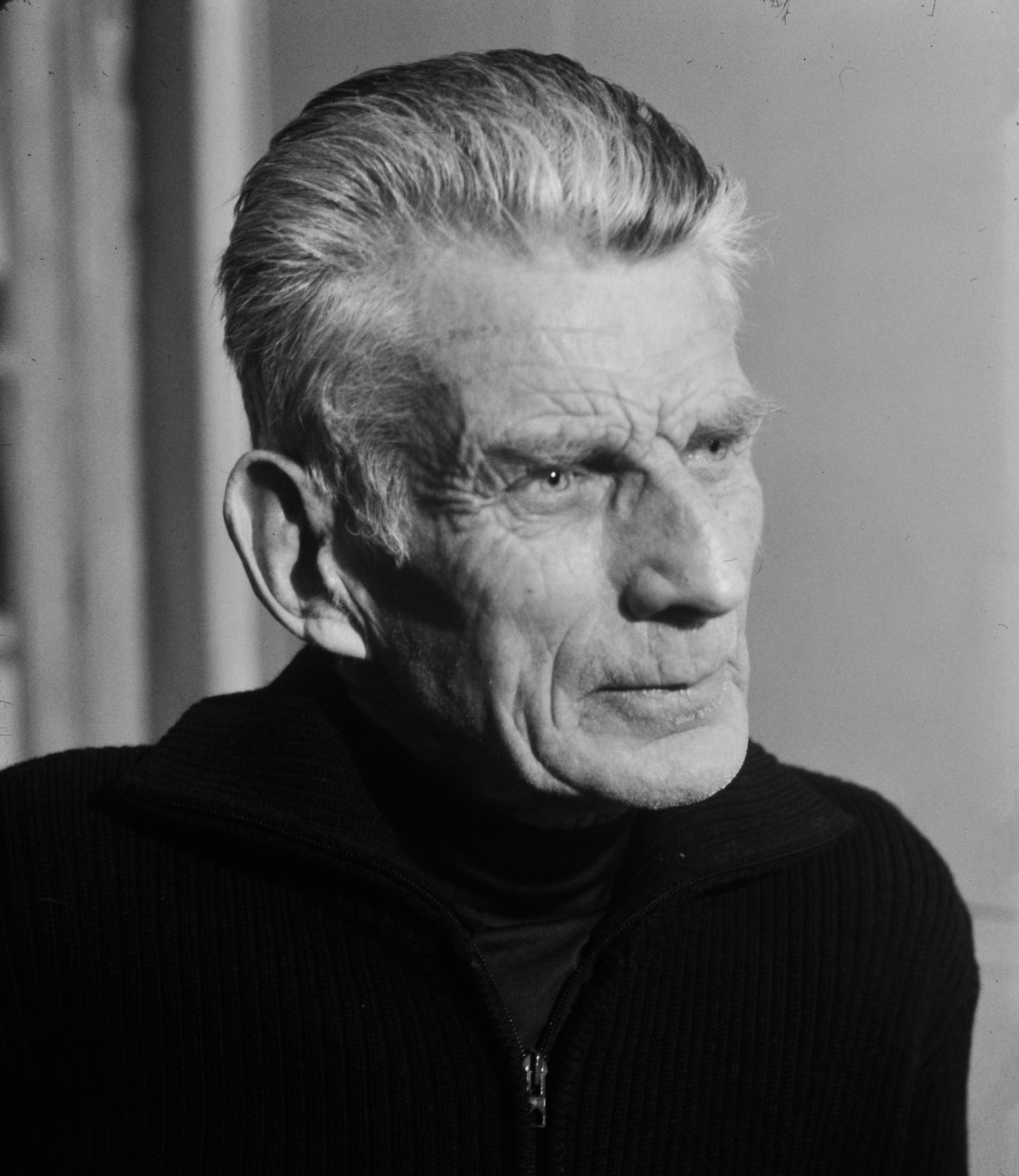 From first-timers to the legends of literature, Peterson has satisfied pipe aficionados for nearly 150 years. If you’re new to the brand, welcome, and might we suggest you begin your collection with 2020’s Christmas Collection. Or, if you’re a detective novel maniac like me, well, then no-shit, Sherlock. And if you’ve been collecting Peterson for decades, you know the good news is that this stalwart has set-in for the long-haul and there’s no end to the beautiful collectible pipes in your future.