Charlie Dunn, a veteran tobacco pipe smoker enjoying life on the side of a North Carolina mountain, is the second in our series of Tobacco Pipe Collector Spotlights. Once a month or so we share the stories of pipe collectors at all stages. If you would like to be featured in this ongoing series, contact us and let us know. 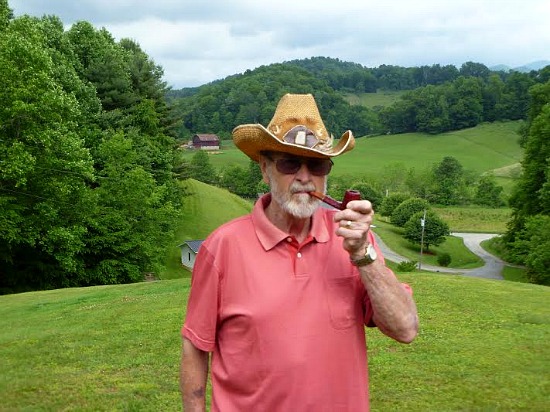 Charlie Dunn is one of those gentlemen who you know must have been a real hell-raiser. It’s clear that wisdom and a vivacious woman have mellowed him a bit, but a hint of mischief is still present in every animated story he tells. Always in motion, he loves fishing and calls himself a “full-time volunteer,” working with his local Habitat for Humanity and the Pillars program at the local high school, where students are taught construction through the hands-on building of livable homes.

After a number of near-death health crises, Charlie says he’s running on ornery and purpose.

I think he should add a good dose of a strong and unique woman to that fuel.

He’s been married to his wife, 66-year-old Sharyn for 22 years. They were engaged and renewed their vows during two of the most disastrous hurricanes in recent times. The couple like to joke that they’ve had a “stormy relationship” and all that excitement keeps them fresh and in love.

Charming and full of novel-worthy stories, I have no problem picturing Charlie sitting on a river bank, pipe in one hand and fishing rod in the other. He says he smokes his pipe to slow down and calm his racing thoughts. It’s easy to believe. In just over an hour, Charlie took me, at drag-race speed, through his 50-year history as a tobacco pipe smoker and collector.

A conversation with Charlie Dunn

Charlie, you must have smoked a lot of pipes over the last 50 years. Which one is your favorite? 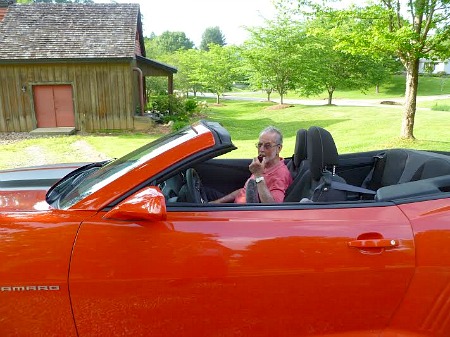 I’ve given up smoking a pipe a couple different times over the years. Previously, I had a collection of over 30 pipes and some of those were pretty unique and I still regret selling them.

This time, I’m building up my collection again, but am partial to a Peterson pipe with a fishtail. It belonged to my father-in-law and became mine when he passed.

I did recently purchase a Savinelli Alligator bent billiard from you folks and it’s right up there at the top of my list. I bought it because my wife drives a 2012 Inferno Orange Chevy Camaro (pictured at right) and I needed a pipe as flashy as her car. It smokes great and ends up on many a Sunday afternoon drive with us.

The main thing is, I like to be able to see the top of the bowl when I’m smoking. I don’t like those straight stems where you can’t hold a conversation because the bowl’s right in your face.

It sounds like you have the best of both worlds, a reliable estate pipe AND a new flashy stunner. Do you use the same type of tobacco in both? What is your favorite tobacco?

I used to travel all over the place. On one of my jobs, I found a JR Cigar right by my hotel. I would go smoke in their tobacco room where they would give samples all the time. I found a Lane Limited called BSA Black Cavendish that really stuck with me. I use that as a base for my own blend. It’s three parts the Cavendish, one part strawberry and one part vanilla. It’s the perfect mild smoke--a little sweet, a little bite, just right. I buy it in five pound bags when I go into Asheville. That’s what I usually smoke, although I just found a hazelnut tobacco I’m planning to order when we hang up. I love my hazelnut coffee, so thought it would be a good pairing. 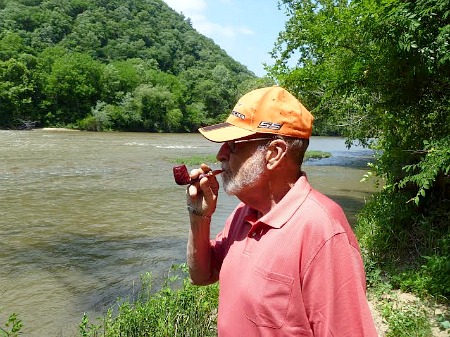 I bet that mix smells incredible. Tell me, where is your favorite place to smoke? Do you tend to smoke alone or with friends?

I don’t know that I care so much where I smoke, just as long as I have the time to smoke a bowl properly. Once I start, I don’t like being interrupted. My wife smokes cigarettes and we’ve created a nice canopied set up right outside our back door. We like to sit out there in the evenings and enjoy a smoke and the sounds of the mountain. We’re at 2800 feet, so there’s always something to see. Occasionally I take my pipe with me down to the river bank. I’ll sit on the edge and feed the squirrels, rabbits and deer.

On Sundays, my wife and I have a routine after church. We go into either Asheville, Boone or Johnson City to do some shopping and I’ll have a smoke in the car to or from dinner.

Charlie, I’m thinking I would like to come for a visit. Sounds like the most calming place on earth. Did you take up pipe smoking once you moved to the mountains? How did you get into it?

My father smoked a pipe when I was growing up. I still remember his Prince Albert tins. I’m a mountain person. I grew up in Southern Missouri and traveled all over for work. Having a pipe in hand just seems natural to me. I used to race stock cars and hydroplanes. I loved the speed and adrynaline. Smoking a pipe helps me slow down and think about life.

My first pipe was a corn cob I carved with my buddies on a camping trip. We packed those pipes with cornsilk for our first smoke--we really had no idea what we were doing. I started cheap. With cheap pipes, cheap tobacco, cheap scotch. The more mature you become, the more you appreciate quality, but I’ll never forget that first cob.

You’ve been smoking for 50 years and you said before that you have quit a few times. Why do you think you keep going back to it? What do you enjoy most about it?

Lighting up a pipe is about sitting back, relaxing and thinking about life. The cadence is unhurried and quiet. In the evenings, with my pipe and my coffee, I feel like everything is as it should be. I’ve been through a few major surgeries and tried quitting, but I always come back to my pipe for the way it sooths me.

This last time, I ran into this gentleman at church who would get up in the middle of the ceremony to go smoke his pipe on the front steps. The smell wafted through the pews and I knew exactly what I wanted my wife to buy me for my birthday that year!

You spend a lot of time smoking with your wife, but if you could sit down with one other person, who would it be?

My father-in-law. We were lucky enough to have many evenings smoking together before he passed, but I miss him now and wish we could have a few more. I’d prefer having him back to any encounter with a celebrity.

You’re lucky to have the memories you have. I bet it feels like he’s with you whenever you smoke that favorite Peterson.

Maybe that’s why I like it so much. Half of the fun of a pipe collection is the memories.

It’s a pleasure talking with you, Charlie. As we wrap up, if you could give any advice to a new smoker, what would you tell him/her?

Start with a medium price range pipe and find a tobacco sampler pack. If you buy a cheap pipe and bad tobacco, you’re not likely to enjoy it. Experiment with different tobaccos and find one that works for your taste buds.

Charlie’s stories about life in the mountains and his incredible wife made me smile all week as I put this interview together. His experiences as a pipe smoker are the epitome of why we love this hobby so much: each bowl is a journey into a simpler, quieter way of life, with enough complexity to keep our hands busy and our interest peaked. Thank you Charlie for sharing your adventures with us.

**Update: Charlie Dunn died unexpectedly on September 29, 2014. We miss his stories during our phone chats and wish his family well.**