As humans, we commemorate things.

Cakes at birthday parties. Bottles of sparkling wine for promotions. Dinners for anniversaries. And, for the pipe smoker, a new briar or tin of tobacco for just about any important milestone.

Take me, for example, two years ago.

I am standing in the corner of a maternity ward triage room. My wife is laying in a hospital bed hooked up to multiple machines, one of which is tracking her contractions in the same way you see a lie detector test scribbling up and down across a continuously scrolling paper. Or maybe how you’d imagine a seismograph going wild when the ground shakes.

We’ve been in the room for at least three or four hours because all the delivery room beds are full. It is not relaxing in this corner. The nurse pulled a curtain around our space and, while it gives us visual privacy, you hear everything.

There’s the woman two beds down who is uttering low howls with every contraction. Another one is talking with a relative or friend; I don’t know which it is. Nurses file in and out. We’re waiting for the word that a bed is open.

My wife is trying to get some rest. The machines are humming. I find some time to slip my phone out of my pocket to begin my search for the pipe that I will buy to commemorate my son’s birth.

You see, we already have a daughter and she is staying my in-laws until the baby is born. When my daughter came into the world, I was not a pipe smoker. It is almost three years later and I am part of the brothers and sisters of the leaf and I feel it is only right to buy a pipe to mark the moment my son comes into the world.

I know I want a Savinelli—I'm half Italian (my mother was born in Naples to Italian parents). I want a rusticated pipe because I’ve never bought one. I want to spend less than $100. The only unknown is shape.

I take a suggestion a friend gave me a few days before and scroll through the Savinelli Venere line. The briar is a lighter color—more honey brown, than anything else. I’ve been interested in a bulldog for a while but they seem too popular. I want something slightly different.

Then, I see the 673KS, which is a cross between a Rhodesian and a bulldog. I love it. This is the pipe, I think to myself. So, here I am, putting the pipe in my cart, paying for it and concretizing in a very briarish way the emergence of my beautiful son into the world less than 24 hours later.

About two months later, I fill the bowl of this Venere with Savinelli 140th. It is a simple but enjoyable moment.

Since my son’s birth, my awareness of commemoration pipes and tobacco is high. And, over the past 19 months, I’ve noticed several people gathering certain years of tobacco or buying certain pipes to honor a moment or a person in their life.

Bradley Coots: The Search for 2012 Tobacco

I met Bradley Coots on Facebook earlier this year. He told one of the pipe-and-tobacco groups I was in that he was looking for 2012 tobacco, the year in which his daughter was born.

“Popping the top on a 2012 tin always brings me back to the most important thing in my life: my daughter,” he told me through Facebook Messenger. “On special occasions and moments where I need to relax and think about how blessed I am to have her in my life, even when the times are hard, popping the tin on a 2012 reflecting about how much she means to me, and how precious the time I have with her is...it’s the epitome of what life is all about.”

I asked him if he sees pipe smoking as a legacy he can pass on to his daughter. He said he’d be happy to if she was ever interested in trying it.

“I wouldn’t hesitate to introduce her into the wonderful world of piping,” he said. “There aren’t a lot of things left in today’s society that can slow you down enough to enjoy the little joys and pleasures that life has to offer.”

Tim Harden: More Than Three Decades’ Worth of Love

We often hear the stories of commemorative pipe purchases when the purchases happen. We see the beginning of the story but we rarely see the same story decades down the road.

More than 30 years ago, Tim Harden proposed to the wife. During that season in his life, Harden was smoking a six-panel GBD Virgin.

“The pipe is a large hexagonal straight stem with beautiful cross and birdseye grain,” he said.

He smokes the pipe on the anniversary of their first date, a tradition that currently stands at more than three decades. For 31 of those years, he was able to celebrate that day with his wife.

“After 31 wonderful years together, she passed away from cancer,” he said. “I still smoke the pipe on our first-date anniversary.”

He stores the pipe in a special cabinet, one that a friend made for him 36 years ago. He only smokes one tobacco in it: McClelland 5100.

“I smoked 5100 for 40 years and hopefully have stored enough to always be able to smoke only that tobacco in that pipe,” he told me through Facebook Messenger. “Wonderful memories are involved when I sit and reminisce.

Bent stem, rustic bulldog bowls. Smoked his for the first time when his son was born.

As his son’s due date grew close, Fainn Ball decided to buy a birth year pipe to commemorate the forthcoming birth.

He narrowed his choice down to a pair of matching Falcon rusticated bent-stem bulldogs or a pair of Bones Timberwolfs.

“The Timberwolf would darken over time while my son’ would remain fairly natural until smoked,” he said.

However, he chose the Falcons because of a personal connection to that line of pipes.

“My great-uncle had a Falcon, so I always wanted one. My father inherited, but it was stolen at a party when I was around 15 years old,” he said. “Since I didn’t know if I could find my own birth year pipe, I decided that we could get matching pipes.”

Buying the two pipes required him to come up with extra cash, so he sold a Peterson to someone looking for a birth-year pipe. With the money in hand, he bought the Falcons.

In the two weeks leading up to his wife’s birth, a hurricane was bearing down on where they were on the Gulf Coast. The storm didn’t bring much more than rain but they were tense moments for Ball and his wife.

She went into labor and it lasted more than 24 hours. During that time, Ball and his brother-in-law made a couple of quick trips to his apartment.

“I knew how much my wife needed rest but if I had to do it again, I would have stayed with her,” he said. “When we got back to the apartment a second time, I brought a camping chair to the porch and filled up the Falcon for the first time. The first smoke was surreal.”

Cornell & Diehl’s Sweet English was his choice for his first smoke, with Captain Earle’s Ten Russians being his subsequent tobacco of choice for the Falcon.

“I smoke the Flacon about once a week because of the rigors of working and having a baby,” he said. “But I always make sure I smoke it on his birthday and Father’s Day.”

The Intersection of Life, Love and Loss

We smoke for various reasons; I started when I returned home from a disorienting and difficult season of life living and working overseas with my wife. I wanted a habit that could ground me. I chose pipes.

The affection I have for the habit expresses itself in the connection I have with my children, my wife and my family. A few months after my son was born, I went on the hunt for a pipe to commemorate my daughter’s birth in 2015.

I narrowed the list down to three or four pipes from a great estate-pipe seller. I brought my daughter into my office and asked her to pick the pipe she liked the most.

Her choice? The one pipe with a date inscribed on it: a 2015 Peterson Christmas pipe. 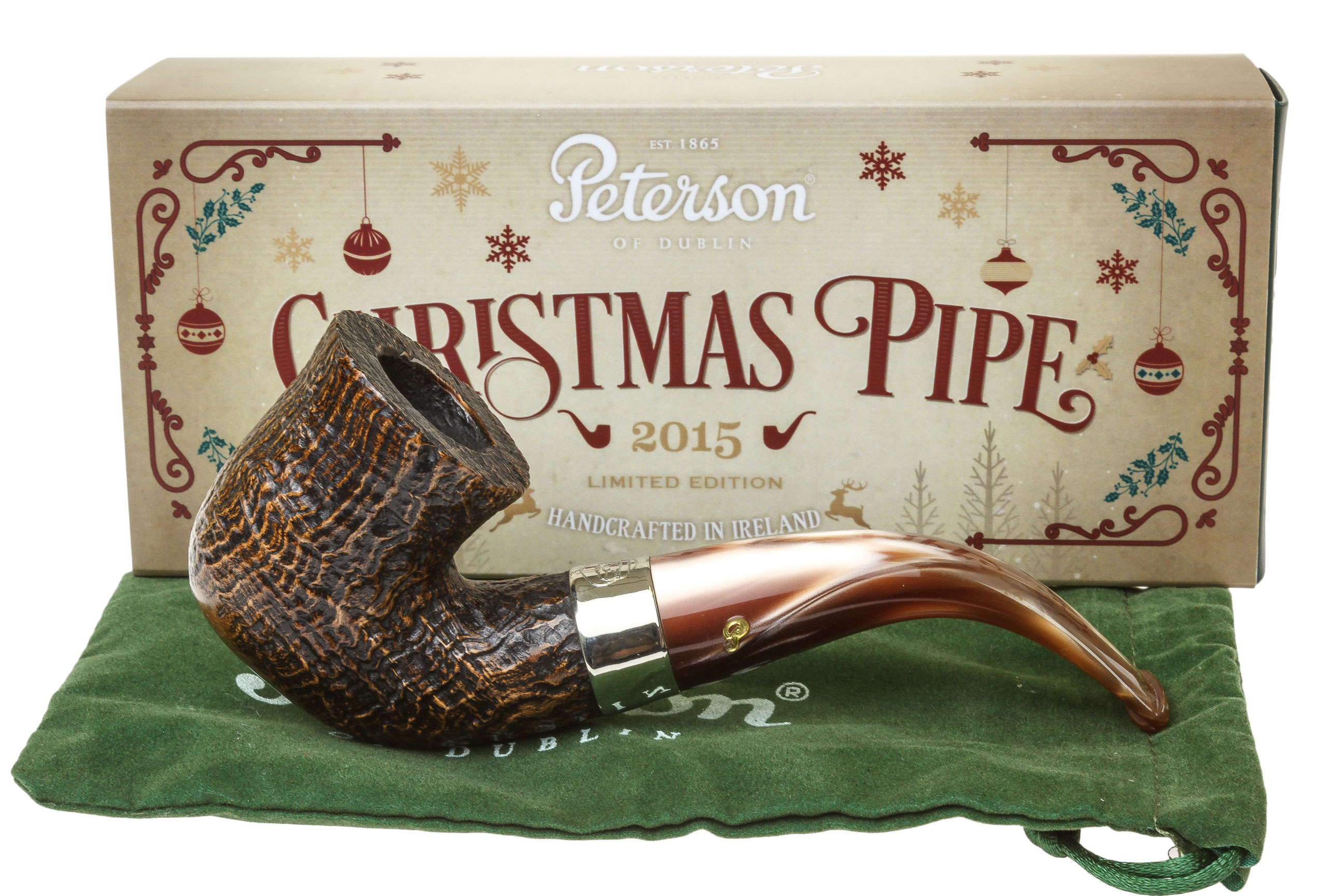 J.R. Duren is an award-winning journalist and author. His favorite tobacco is Germain’s Century and his favorite pipe is a Casillero bent pot. His cellar is heavy on English and Balkan blends. The first pipe he bought and smoked was a Kawyoodie White Briar.