Another excursion into two fine pipe tobaccos and one premium cigar. This will be my first foray into Samuel Gawith’s Aromatic offerings. But if their other blends are any indication, I assume I’m going to need to give a decent amount of dry time.

Upon cracking the tin I get a herbal spice and sweetness. The more I try to pick through it I get fruity, earthy, grassy notes. The top flavoring really gives it a scent all its own. It’s difficult to succinctly define—I start to get the sense that I could fool myself into finding any note in it. 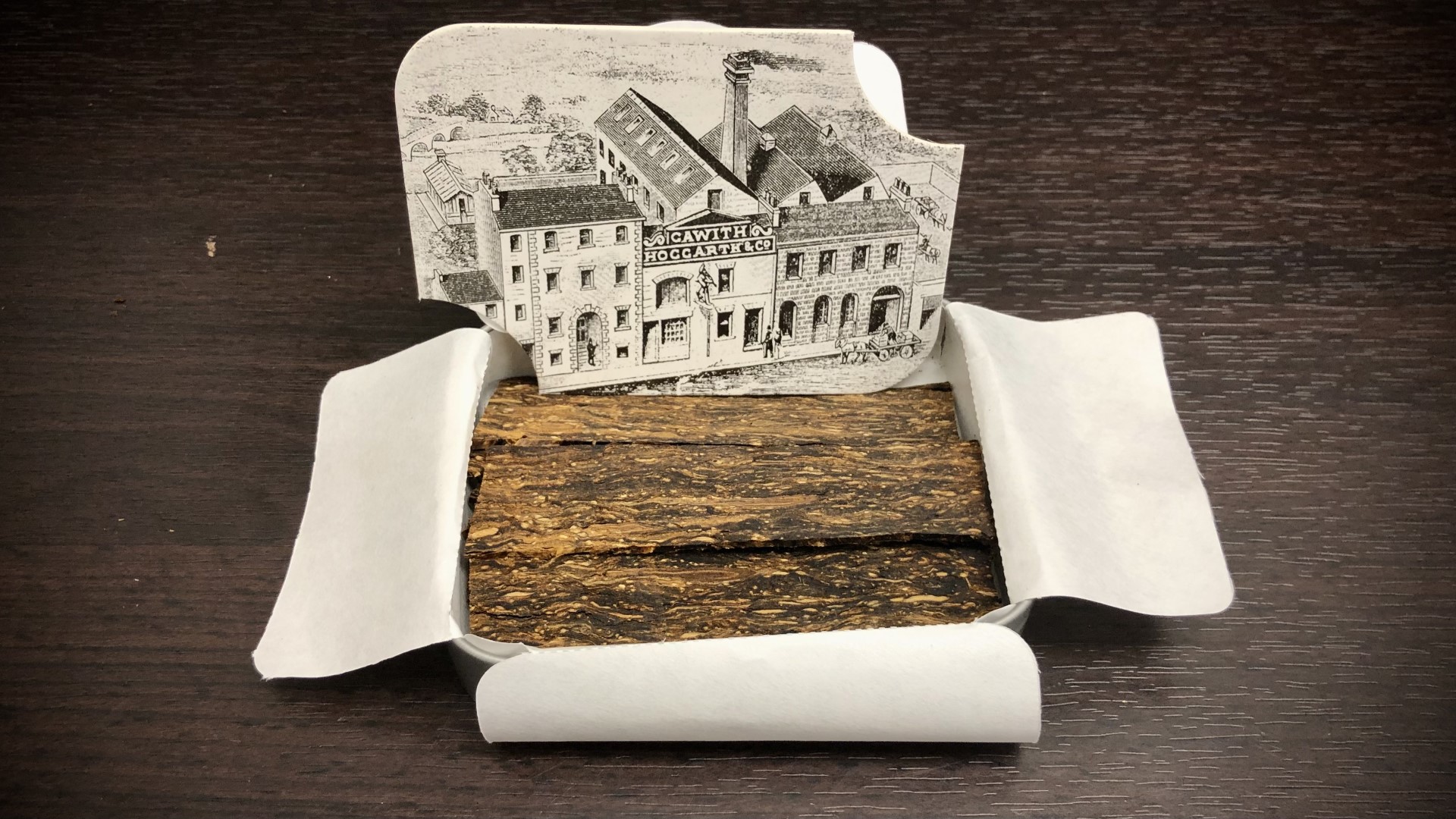 The flakes are just what you’d expect—very tightly pressed, perfect strips. A good mix of yellow and brown leaf.

I partially rub one of the flakes to dry. I give it about thirty minutes and then rub it out more (it’s a little less protesting after sitting out). I end up giving it about an hour and a half out of the tin. Still decently moist but I expected that with a Gawith blend—I’ll certainly try it with different dry times.

I pack Fire Dance into my newest acquisition, this beautiful meerschaum bent Billiard. 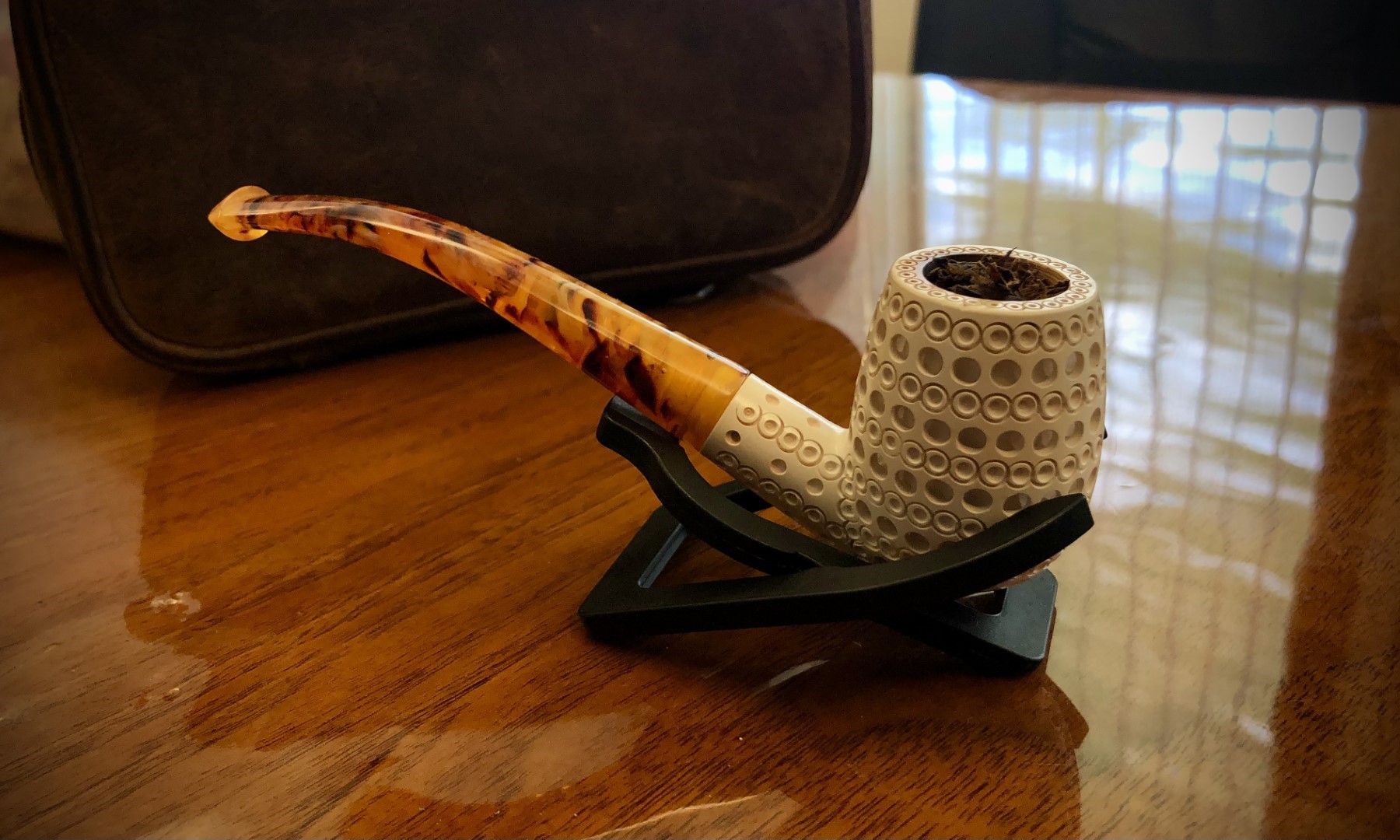 The char light prompts an interesting fruity top note that I couldn’t really pin down, but I certainly noticed that Virginia bready aroma wisping from the bowl for an instant when I set it down.

At first, the leaf didn't seem to have much of a problem taking a light, but then it’s out within the first few puffs. After a few relights however I start to keep a smolder going. I think more drying time would have saved me some futzing but it’s just as well.

A tart berry flavor seems to lead the profile. Abutting bready and floral notes wade about, as well as a light liquor note.

Might be a bit fussy with the light, but once it’s going, the burn is nice and slow. It is a bit bitey, which again I think is an issue that could be abated with more drying time.

I really enjoy Fire Dance through the retrohale. You get a nice earthy side—earthy, tart, and exceptionally floral. As for changing through the smoke, I noticed a dimming of the bready-ness. It seems to come back through in glimpses. Not so much like when a flavor comes and goes or you might notice it every few puffs, but more so peeks from the edges of the senses so briefly it’s hard to tell if it’s more taste or smell or both. It’s like the periphery of the palate.

I'm interested to see how this one plays in other pipes, with more dry time, and more familiarity.

I’ve given Fire Dance a few more smokes at this time, and have messed around with drying time a bit. It definitely helped letting the rubbed out flake sit a few hours. Still might take a couple lights after the char, but produces a creamy, consistent smoke once it gets going. Match users, stock accordingly.

It seems more of the profile is coming through now, especially more of a highlight from the Virginias. More consistently bready and a slight grassy note. Apparently there’s some vanilla, I get a hint of cream and perhaps that’s it. 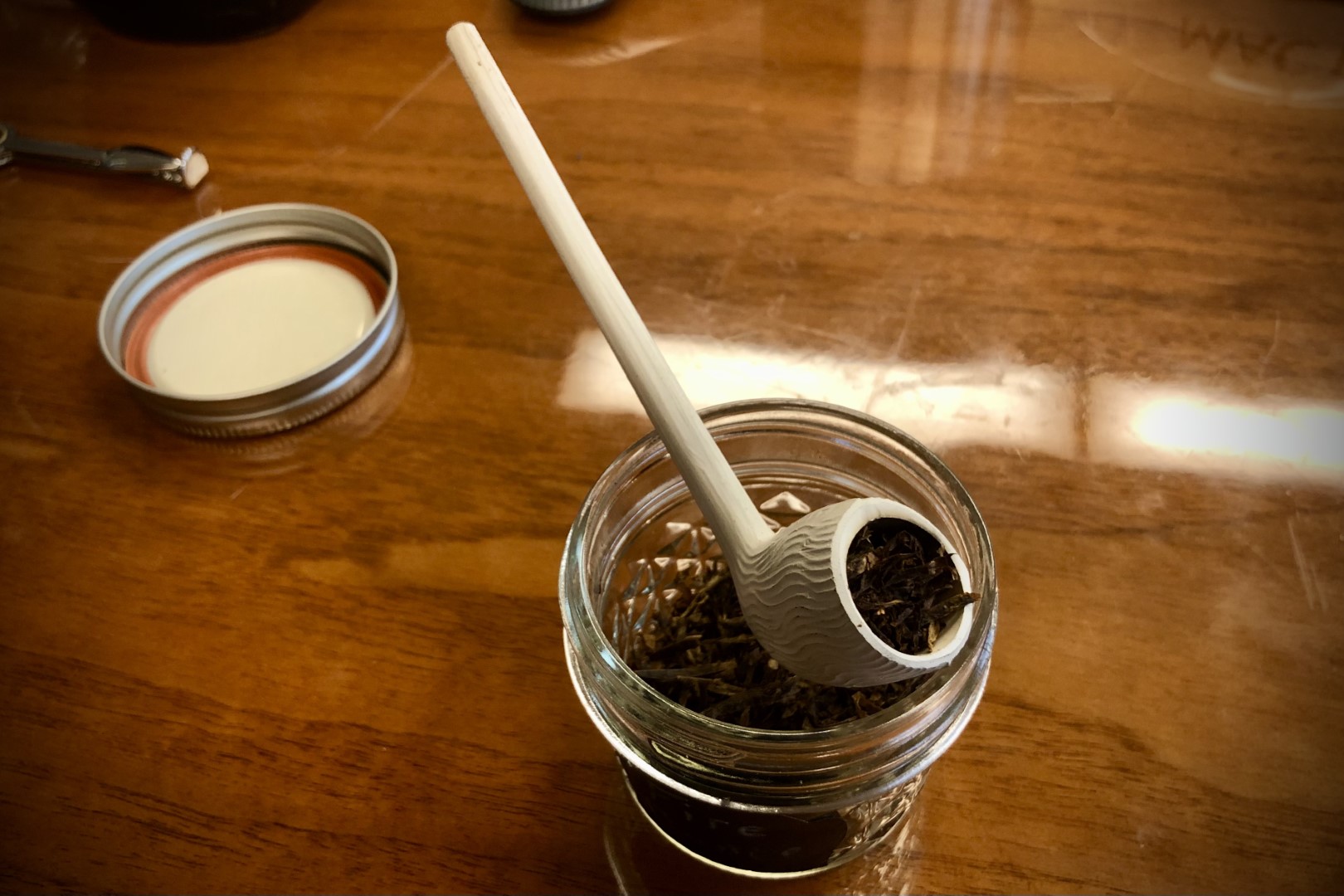 As for throughout the smoke, it has a very consistent profile. Complex, journeying blends can be fun, but with Aromatics, sometimes top flavorings seem to be totally eclipsing, or start off prominent and burn off leaving a fallow profile. Sometimes consistency is welcomed.

Fire Dance is straightforward and stays that way. And though it's straightforward, it offers interest in that its flavor, while not all that complex, is unique. Not an Aromatic "type" like a cherry or vanilla blend, but something a bit more enigmatic. And of course, the Virginias aren't masked, which I appreciate in my top flavored blends. 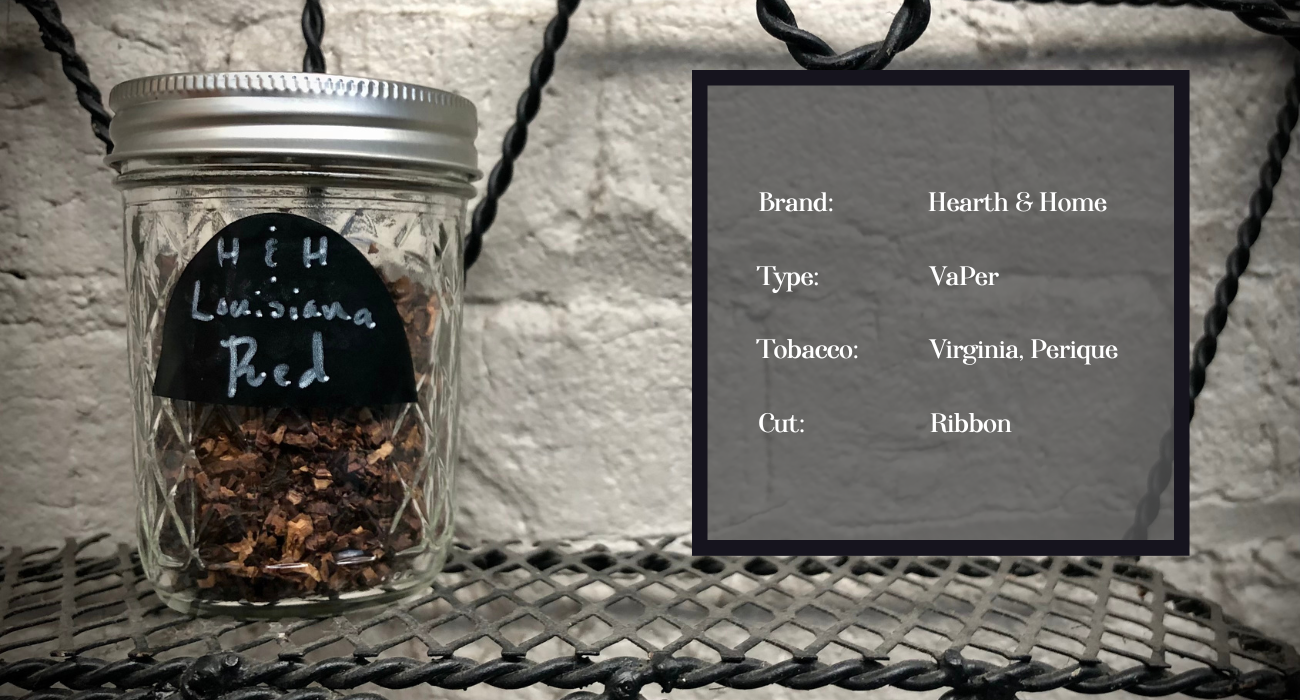 This will be the first Hearth & Home blend featured in a Tobacco File.

From the tin note, most all I get is vinegary red Virginias. But I feel like that’s common with the more vinegary reds. It’s kind of like certain Aromatics, the scent sometimes belies the more dynamic profile that’s actually in the taste. 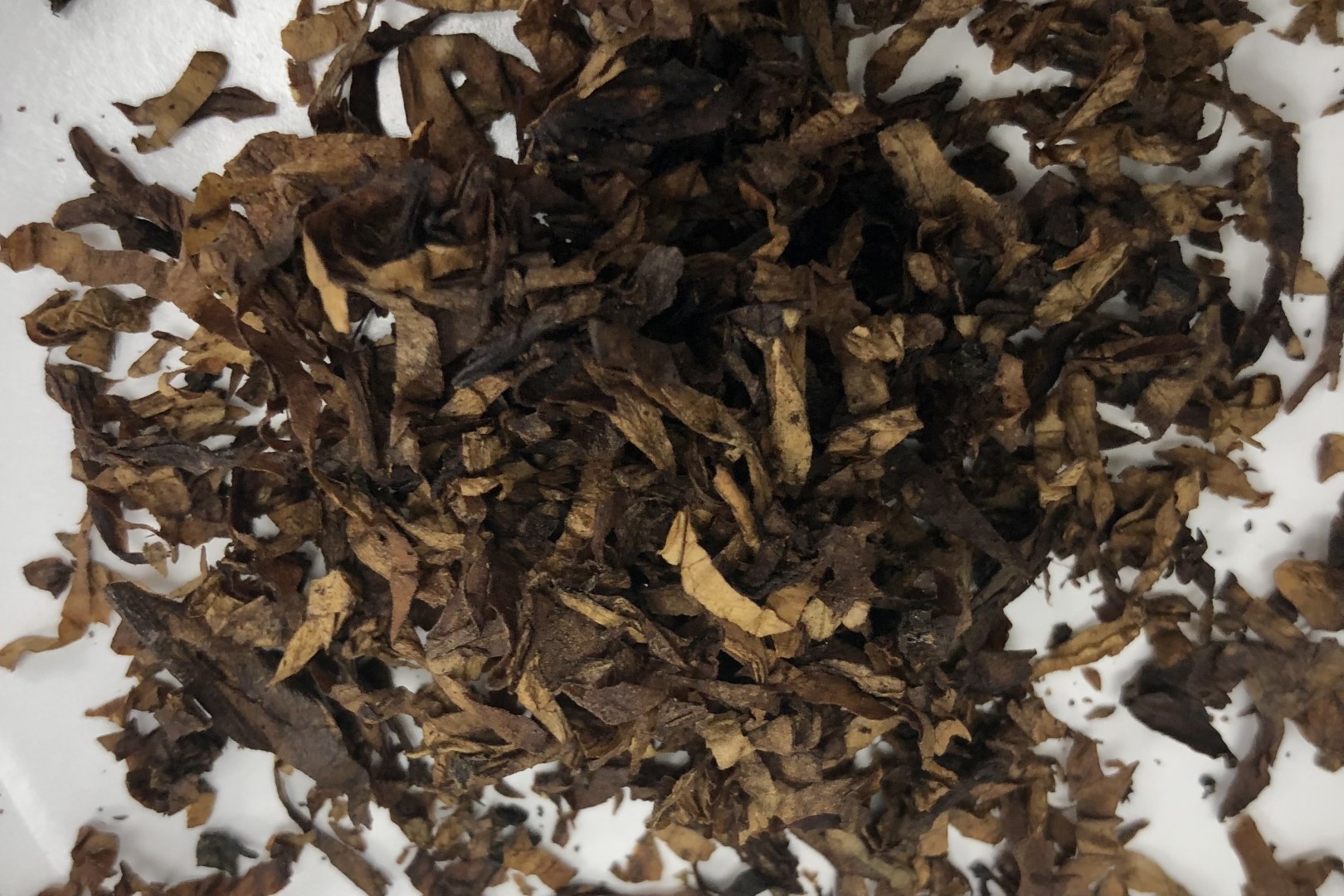 The presentation is a pretty straight forward ribbon cut. Different lengths and widths, some quite long. Comes at an average moisture I’d say, but I gave it about twenty minutes before packing. Feeling it, my impulse would be to give it a little more time, but we’ll see how it goes and factor that in moving forward.

I’ve packed some Louisiana Red in my Rattray's Butcher's Boy. The wide chamber is great for complex blends, which I don’t necessarily expect Louisiana Red to be, so I’m not really coming at this with any method. I like this pipe and I’m ready to enjoy a new VaPer, sometimes that’s all ya need! 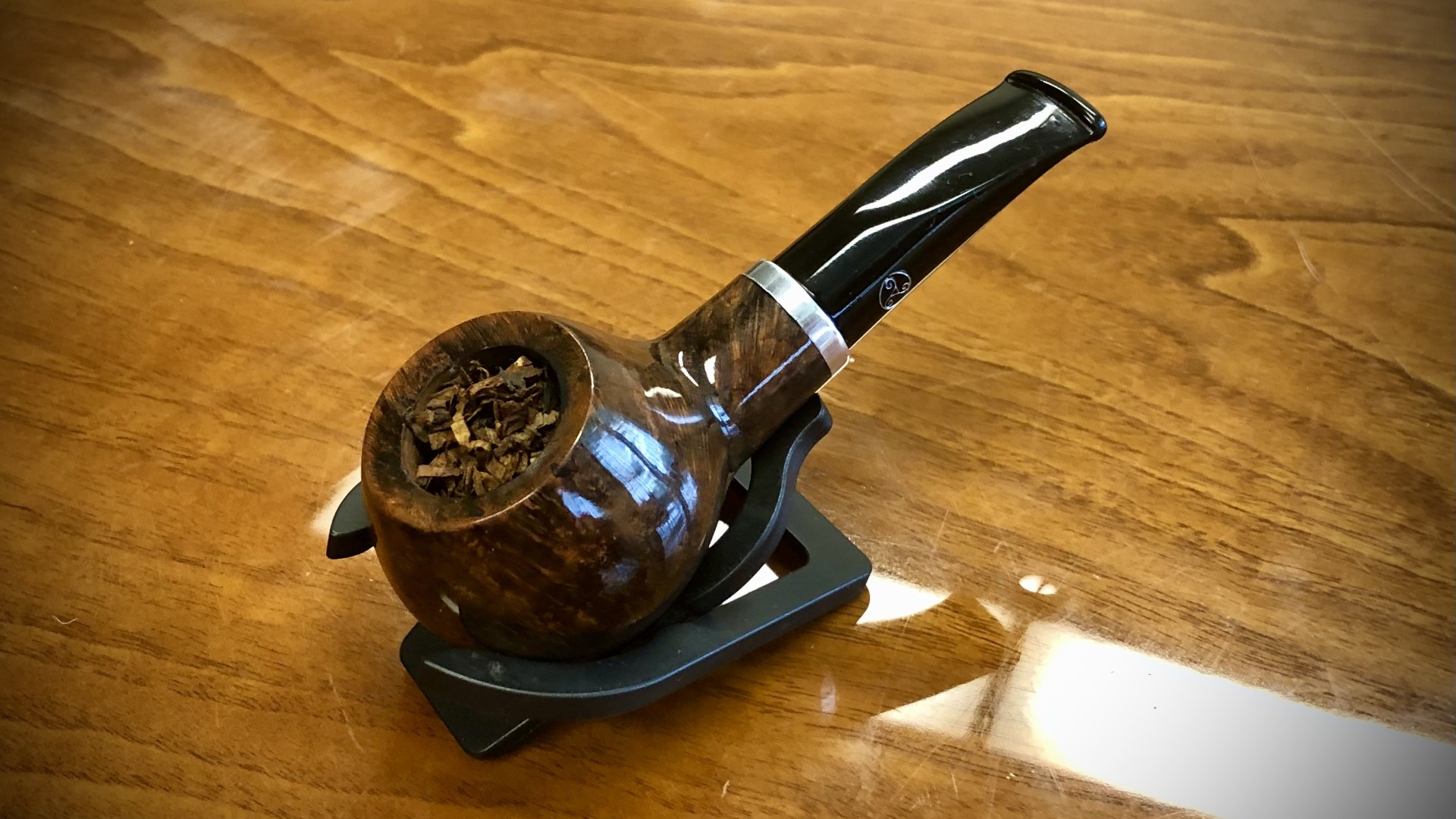 First puffs suggest we have a sweet, red-prominent VaPer not too shy with the Perique. Virignias have a deep sweetness. Leans to the plummy, tangy side with a slight breadiness. Perique is earth and spice, especially when being retrohaled.

A warm sweetness on the tip of the tongue.

Still early in the first bowl, but I can see this being excellent for the VaPer appreciator who wants noticeable Perique but not aggressive. Offers an inviting retrohale, it’s earthy but doesn’t take the hairs off.

I get some hay, but not noticing grass or citrus—nothing too indicative of brights.

A pretty down the middle red oriented VaPer.

Though still consistent and quintessentially of its category, smoking Louisiana Red in narrower bowls has offered some variation.

Mostly, I get a little less of the peppery, spicy side, and the Perique seems a bit more defined. That may seem sort of backwards, but by "more defined" I don’t mean bolder, but in higher resolution. I get more of the savory, earthy and plummy notes from it, not as much pepper, which isn't to say it was a spice bomb in the Rattray's. You still get some spice in the sinus but it’s gentle.

A bit more brightness also developed as I've gotten more familiar with the blend as well. I get a subtlety sweet honey and citrus taste under the tongue. Still more red Virginia oriented, but certainly more bright qualities than the initial impression had me believe.

My preference is for an average to narrow chamber size with this one.

I'll also note that I tried Louisiana Red in my new meerschaum, and it seemed to lean a little sweeter in that pipe. I'm excited to have another meerschaum on deck (only have one other) to get a bit more variation with tasting these blends.

I recommend packing some Louisiana Red in a corn cob pipe and having a blissful smoke on the James (though I'm sure other bodies of water should work just fine). 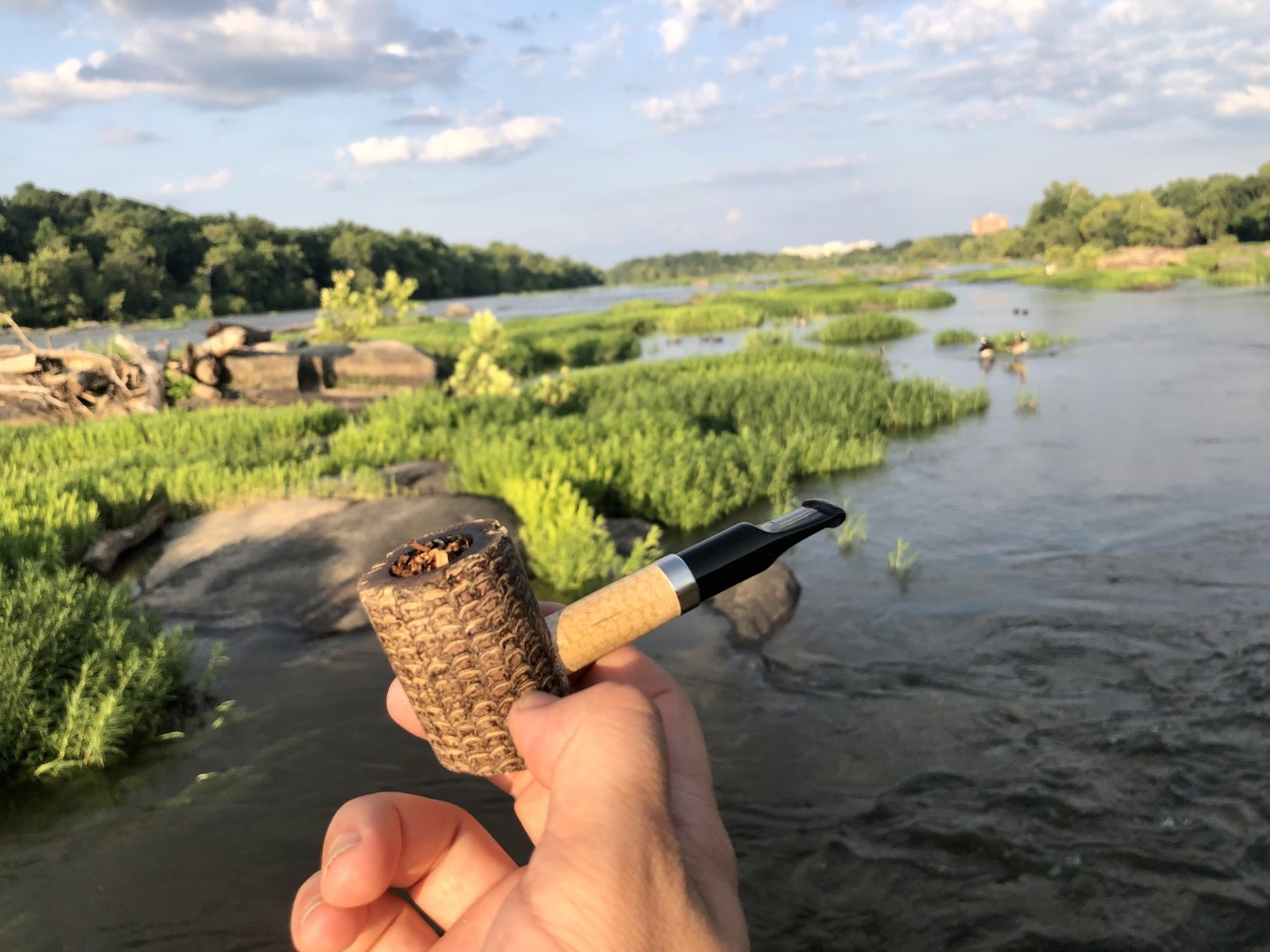 The other afternoon—my Missouri Meerschaum Dagner Poker packed with the VaPer—offered one of those rare exceptionally good smokes. We talk a lot about all the little factors that can impact one's experience from one smoke to the next, but maybe most important of all is simply being in that amiable headspace where you're open to receiving that peaceful pleasure.

Here's to many such experiences for all of us who enjoy a pipe.

So for this Tobacco File's Featured Cigar we have the Kentucky Fire Cured Fat Molly Robusto from Drew Estate’s MUWAT brand. I was very interested to try one of these as it's wrapped in the dark-fired leaf so familiar to us pipe smokers. Just smelling the unlit barrel, that smokiness is apparent, though not bold like you’d find with your nose in the tin of a Kentucky heavy pipe blend. I’m intrigued, let's fire up. 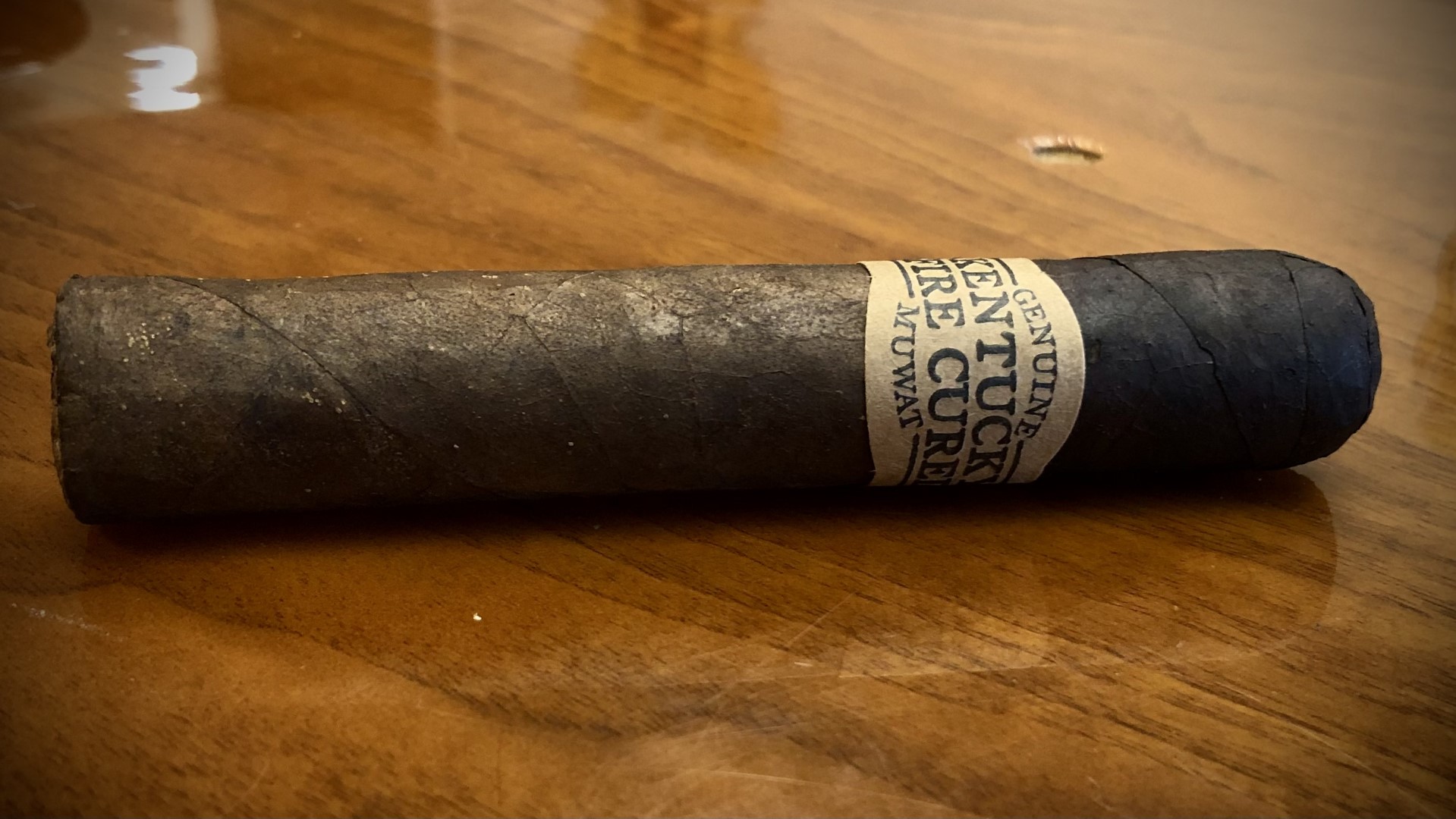 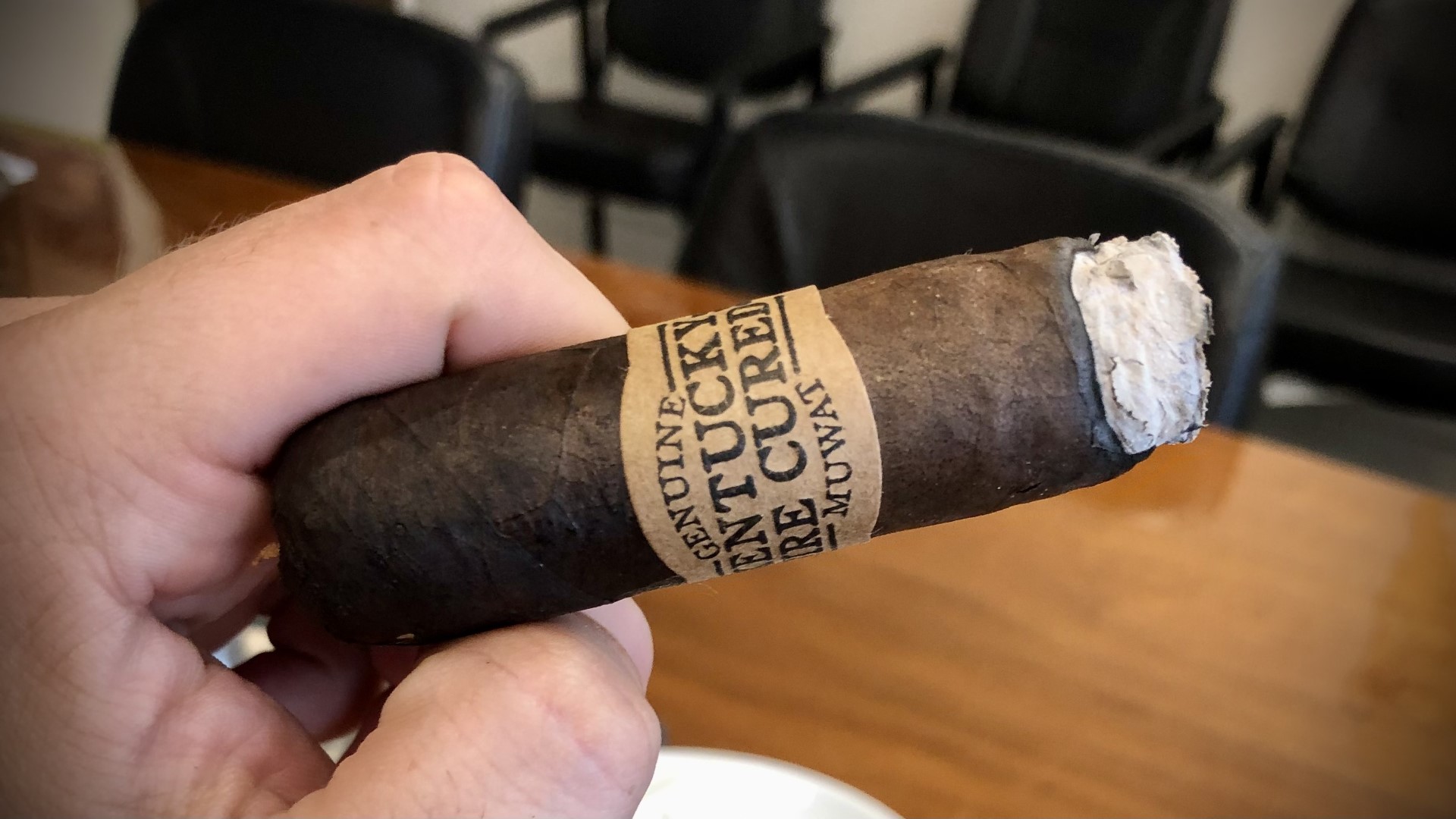 That's it for this File, but next time we'll have two brand new blends to dig into which should be a lot of fun.