Another mid-month Tobacco File ushering in a new blend—Aberrant, from Sutliff tobacco.

This is the third installment of the Birds of a Feather Series, a collection of six special mixtures that were concocted by Mac Baren master blender Per Jensen during a week-long visit to the Sutliff factory in January 2022. That’s the short version, but you can read all about the development of these tobaccos in our blog all about the making of the Birds of a Feather series.

Each blend in this series features at least one special variental tobacco. The first release, Uno, debuted Katerini Perique. It also include genuine St. James Perique, as did the second blend to grace the flock, Whimsical. Now we move on to Aberrant, which hosts Rustica.

The common pipe tobacco varietals we are familiar with (Virginia, Burley, etc.) are all strains of the Nicotiana tabacum species. However, Nicotiana rustica is another species within the genus. South American in origin, this was the tobacco cultivated by natives in the now eastern United States. It was cultivated by colonists until John Rolfe got a hold of N. Tabacum seed from Trinidad in the early 17th century. N. rustica's bold and harsh qualities made it no competition for N. tabacum, but this was a time when very little was known about techniques in processing to smooth the rough edges.

With the creation of HH Rustica, Jensen was a major part of bringing Rustica into the blender's arsenal, sun-curing and hot pressing the leaf to preserve its natural sugars. The result is a powerful yet palatable varietal that brings body and earthy spice to a mixture.

Sutliff - Aberrant (Birds of a Feather) 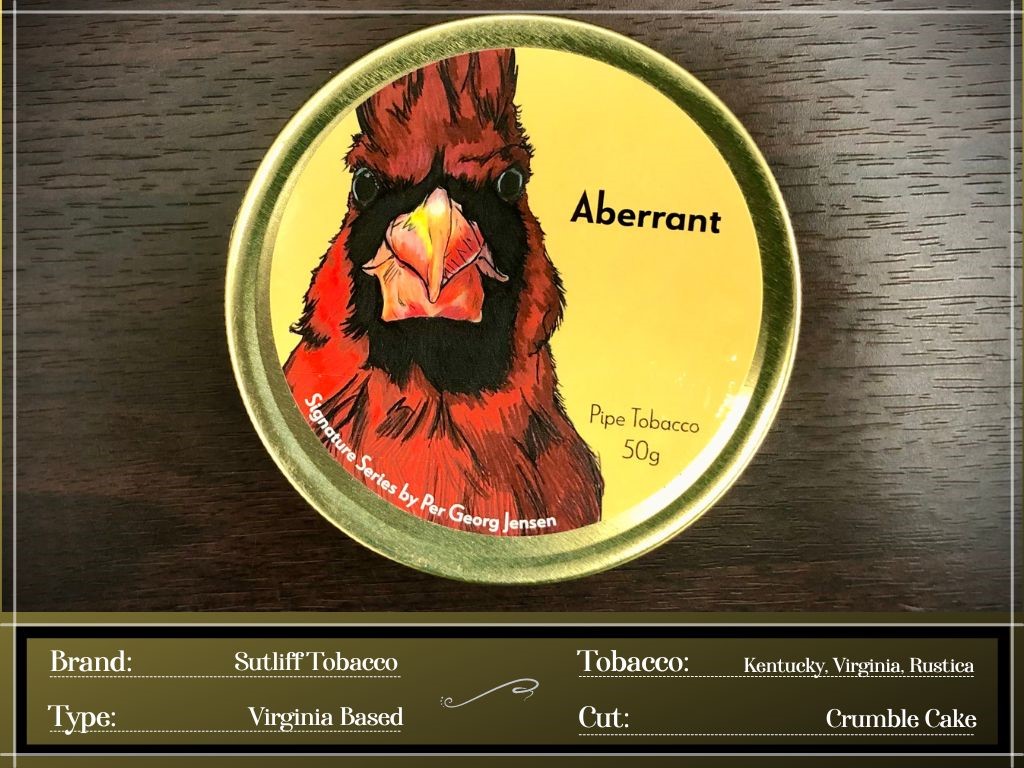 I did have the opportunity to try Aberrant during Jensen's visit. On the last day, a panel of pipe smokers got together at Sutliff to try the new blends and offer feedback, and everyone went home with a sample of each blend. I believe I smoked Aberrant a couple more times, but then sealed the remaining 0.5 oz. in a jar where it has been aging since February. 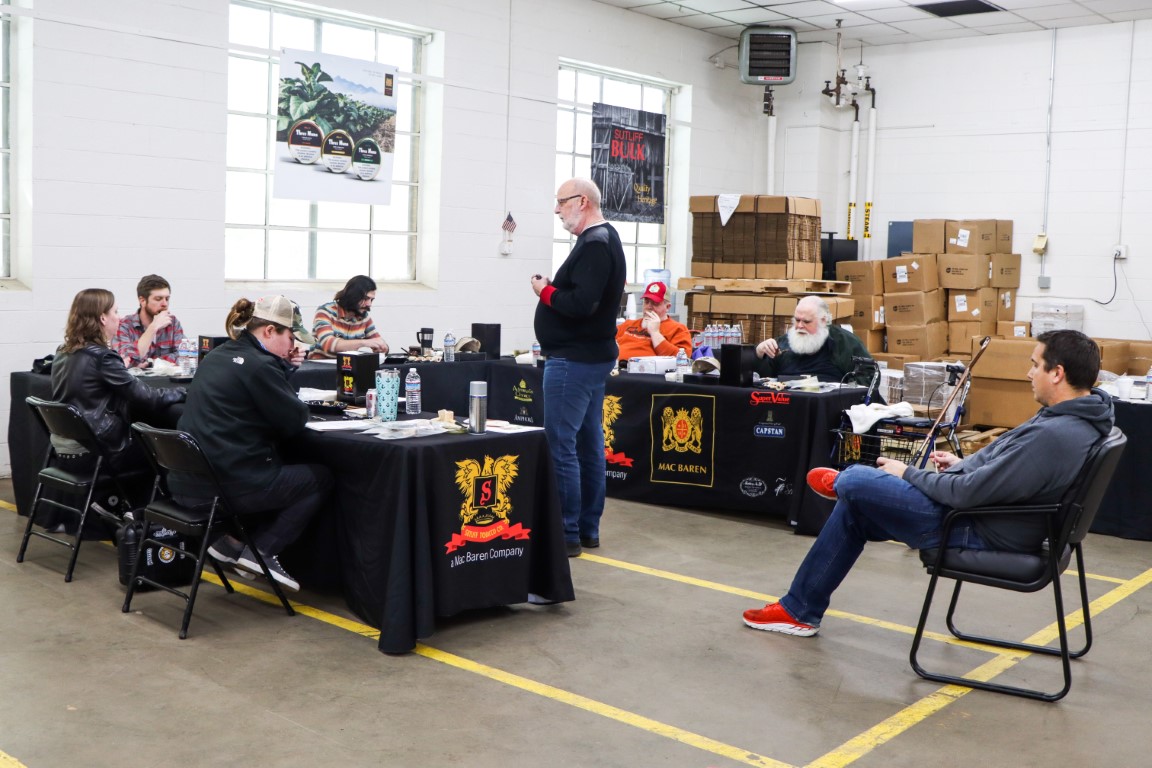 All of this to say, I'm coming to this blend pretty fresh. Although, I did find notes I had taken while smoking a bowl in early February. I decided to wait to read those until after this inaugural smoke, but I'll be interested to see how my perception has or hasn't changed.

Popping the tin, I'm presented with that familiar Sutliff style crumble cake, sliced into a few wide slabs as opposed to a brownie-like block.

There seems to be a decent amount of light brown leaf here, maybe a good portion of bright Virginia? Of course we also have the darker hues from the fire-cured Kentucky leaf and the stoved and darker Virginias. 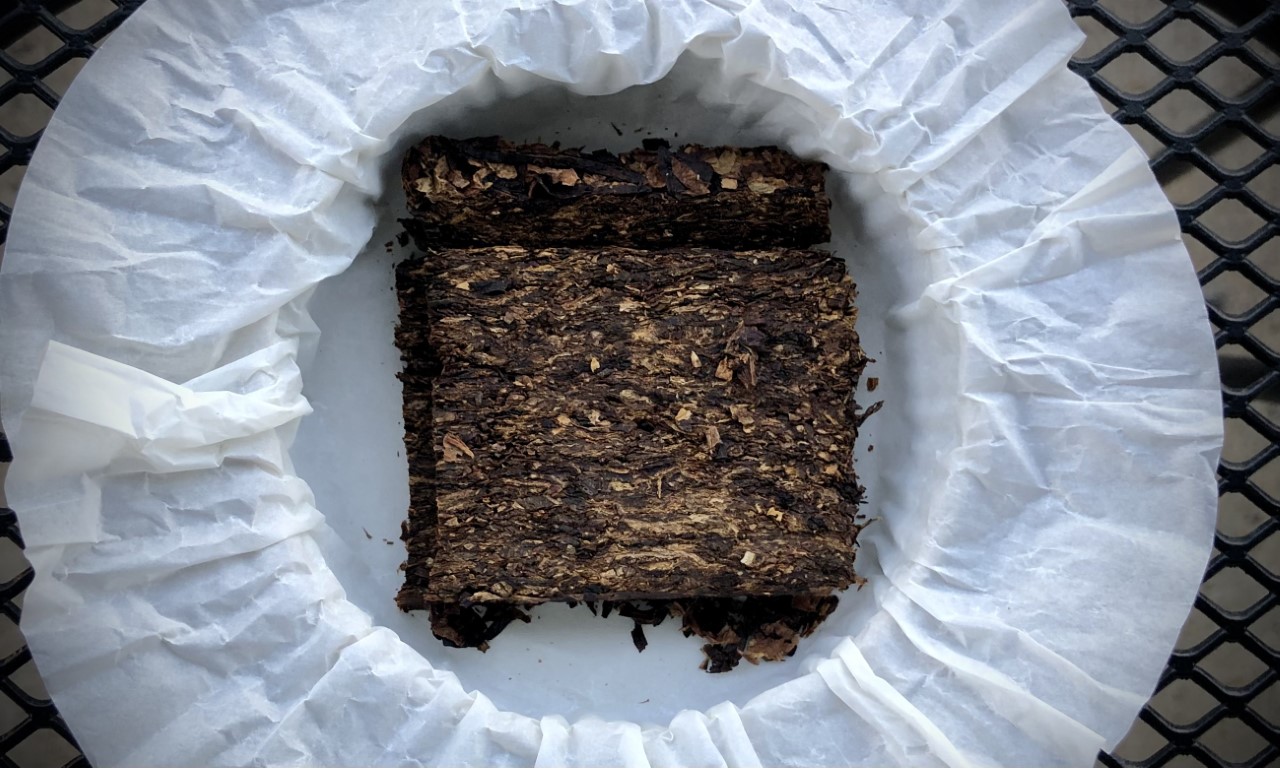 The tin note is muted. I didn't get any unleashed aroma when breaking the seal and only upon bringing my nose to the tin do I get the very natural scent—hay and maybe a bit barnyard-y.

The cake breaks apart easily and is quite dry. Not in a friable way, but very much smoke-ready.

As has become tradition, my first smoke from a Birds of a Feather blend will be in my Georg Jensen Granat 78.

Earth and plummy dark fruit lead the profile. There's a Virginia breadiness, a subtle grassiness in the foundation. As I smoke on I definitely start to notice a smoky accent from the Dark-Fired Kentucky. A mild pepperiness starts to rise—unmistakable in the olfactory, but not harsh—though it may be to a pipe smoker with a bent for mild blends. 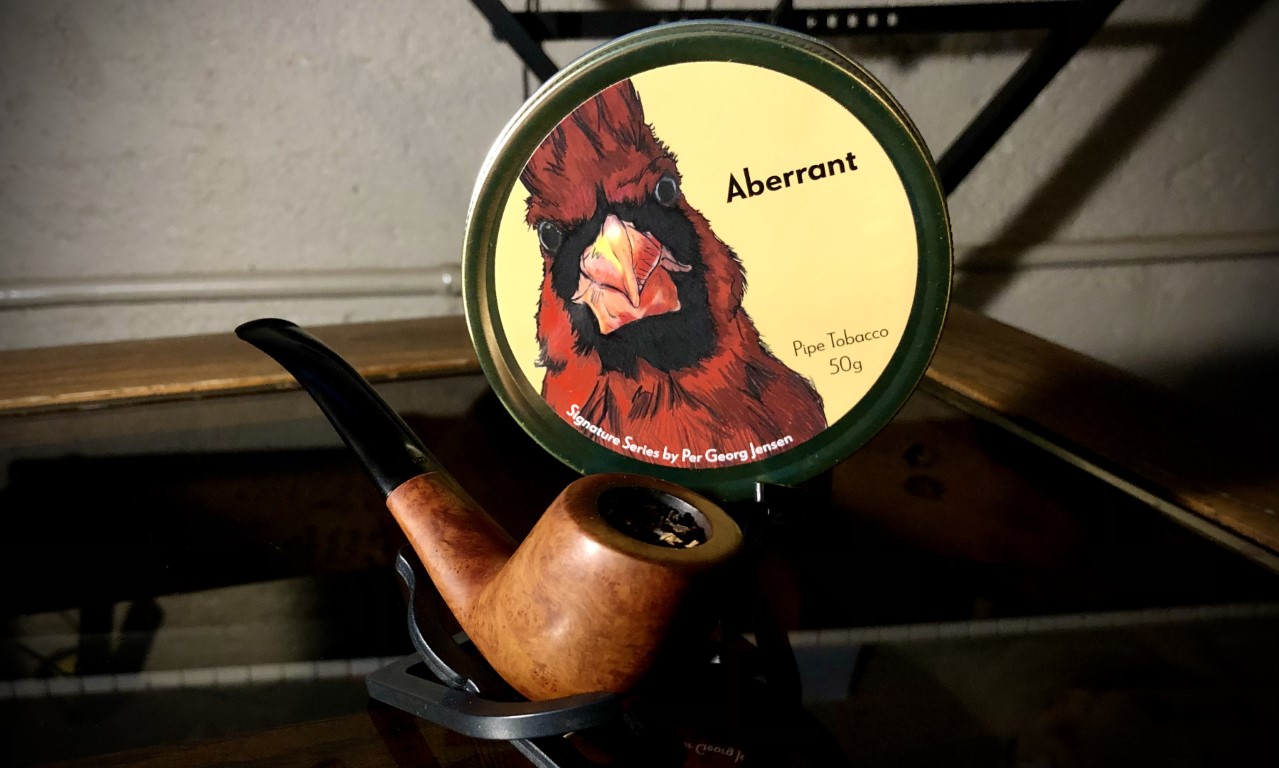 Aberrant stokes with very little effort, making it easy to keep a smolder going without needing to relight. I'm cautious not to over puff it however.

There is a note in here that is so connected to another blend in my head and I can't think of what it is. It's eating at me like when there's a really simple word you just can't remember, and you know when you do you'll feel silly. It's something about the bread-y Virginia note mentioned, it just has a familiarity that I cannot place. Maybe it will come to me.

Aberrant offers a very consistent smoke. Having tried it in several pipes now, I will say it has the sort of complexity that lends itself to medium to larger bowls for a complete view of the profile. I took a note while smoking my Rossi Piccolo 313 (one of my most narrow chambers) that I miss some of the the grass and citrus subtleties in the petite pipe, leaning more bready. Still a fine smoke, but it's a full blend offering a lot to sift through.

Speaking of bready—Mac Baren's 3 Nuns. That's the association I couldn't place. Or Savinelli Doblone d'Oro for that matter. To my palate, it's a very similar toasty-bright-sweetness I get from those blends. To be clear, I don't find Aberrant to be all that similar to Three Nuns or d'Oro, it's just that note, this distinct point of intersection.

Anyway, I'll add that the more I've become familiar with Aberrant, I'm noticing that Kentucky a lot more. It seems to be sparingly applied, but brings dynamic to the profile in a lovely way. Floral and smoky notes that, with the Virginia sweetness, contrast and balance very nicely with the earthy Rustica.

Aberrant is a much different blend than the BBQ smoky HH Rustica, and with so few pipe blends out there incorporating Rustica, it's nice to have a mixture showcase it in such a different way. We will have one more Rustica blend in the Birds of a Feather series, and I'm excited to get better acquainted with the varietal through yet another mixture. 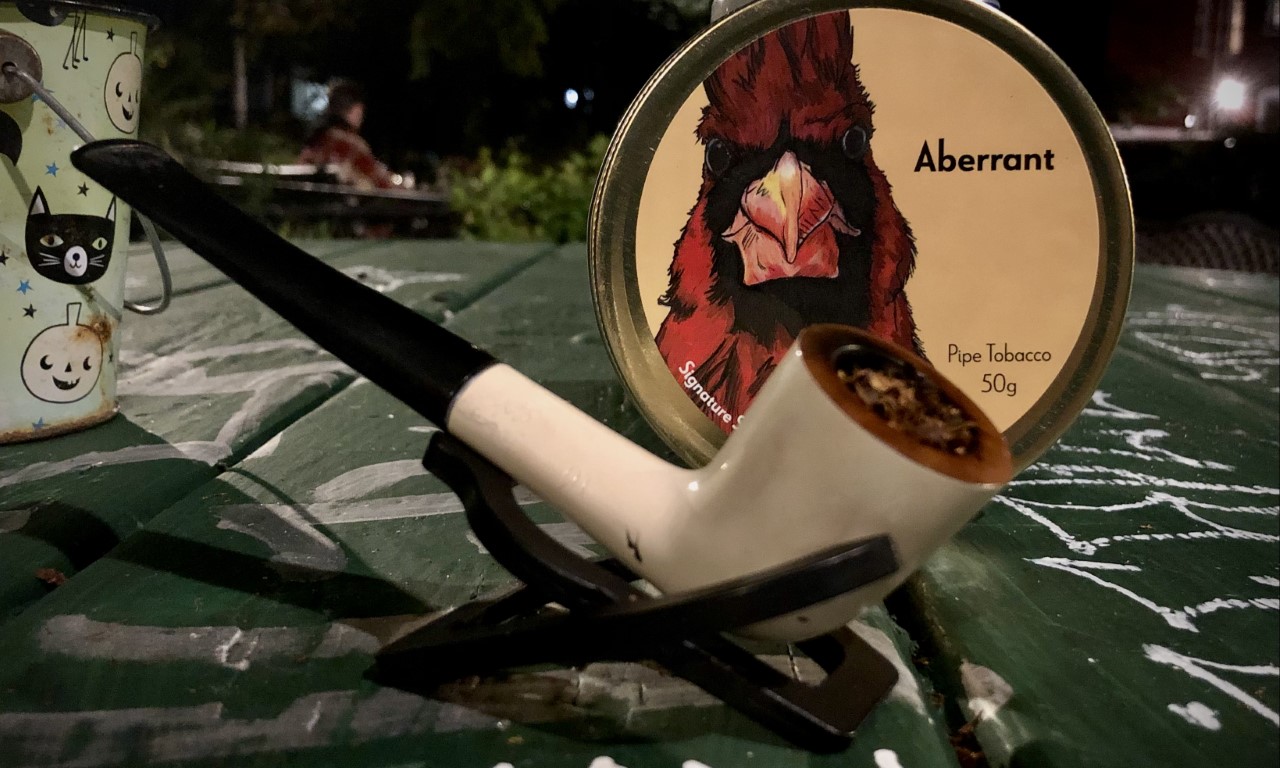 It does seem as though my initial impression washes with my experience now. Here are some of my notes from February before jarring my sample:

Like I said, the Kentucky became more apparent as I became more familiar, so it makes sense why it seemed so masked at the time.

I'm tempted to open my jar of Aberrant for comparison, but with about eight months of age on it, I think I'd like to give it some more time.

But really, another wonderful blend in the series that is absolutely original. It's rich and deep in flavor and I suspect one of those blends that continues to present nuances here and there, even well after the couple weeks I've been exploring it.

Three down, three to go for the Birds of a Feather series. I'll dedicate a column to the next blend in the series, Eccentric, once it comes around, and certainly will have more columns for special releases before then. And of course, I'm writing about two regularly available pipe blends and a featured premium cigar for October's Tobacco File, which I'll post near the end of the month.