Well, hello. Back again for another What I Smoked This Week with Peterson’s Irish Whiskey and Captain Earle’s Ten Russians (European friends may know Irish Whiskey as Irish Mixture).

This was a very enjoyable week for pipe smoking—two new tobaccos and two new pipes. Let’s get into it.

I thought I'd choose a blend with a little Irish spirit ahead of St. Paddy's next week. It actually overlaps with Purim but I don't know if any blends speak to the Book of Esther.

My notes for the tin aroma say "mango? orange?" I now think tangerine was what I was getting at—specifically dried tangerine. I was surprised to get a fruity note from this one. To be quite honest I don't know my spirits well. Definitely not enough to speak to any sub-varieties. So is there a fruitiness to Irish whiskey? I really couldn't say but I do love the Peterson Irish Whiskey tin note.

That said, the leaf has a soft consistency and is dry to the touch. Not overly dry, but definitely more so than you'd expect from a real flavor bomb of an Aromatic. So I figured this was a classic case of top note having a larger role in aroma than taste, which the tin description suggests.

I don't doubt Irish Whiskey would smoke fine right out the tin, but as is my usual method with new blends, I give it a little time airing out. Probably 30 minutes or so. Then I pack it into my new  J. Mouton Poker.

Let me tell you, I love this pipe. 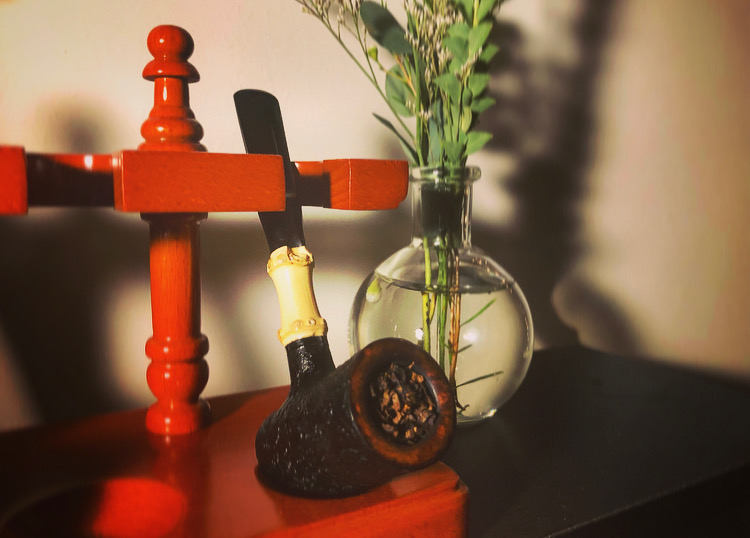 Mouton is a fantastic artisan pipe maker from Gueydan, Louisiana. The biography for the J. Mouton Pipes tab on the site was also the first thing I wrote when I started with TobaccoPipes.com. We carried a couple Moutons at the time, and received some more soon after. I had my eye on this one Poker, but I waited too long and missed my chance. Thankfully, we recently stocked a new run of 20 fresh J. Mouton pipes, and I knew I had to get this one. Clearly, I wasn't the only one unwilling to wait and see if the pipe calling my name was still there tomorrow—most of them went quick! As I'm writing this, there are a few left, I highly recommend you check them. An instant favorite on my rack. 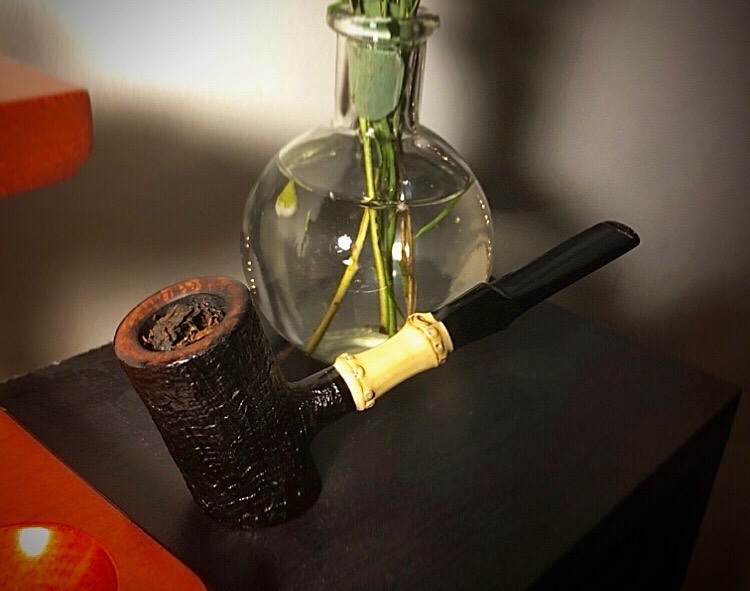 Okay back to Irish Whiskey.

You definitely get that top flavor, but it's condimental, not dominating. And the flavor isn't exactly tangerine, it's still this very amiable dried-fruitiness—a natural sweetness, not candy sweet. It's smooth, which really brings dimension to a blend that's quite heavy. The Kentucky and Burley offer a decent nic hit and body that develops through the smoke.

The Virginias offer that toasty, grassy, bready sweetness that reminds me of Orlik Golden Sliced. But of course, the overall profile is powered up by the Burley and the Kentucky, which offers a little spice here and there.

Golden Sliced being one of my favorite blends, I could see myself switching to Irish Whiskey when I want to scratch that itch with something a bit stronger. Perhaps after a meal or seeing the evening out with a smoke and a drink.

I haven't had many blends with Dark Fired Kentucky. It's an interesting condiment I would definitely like to explore some more. 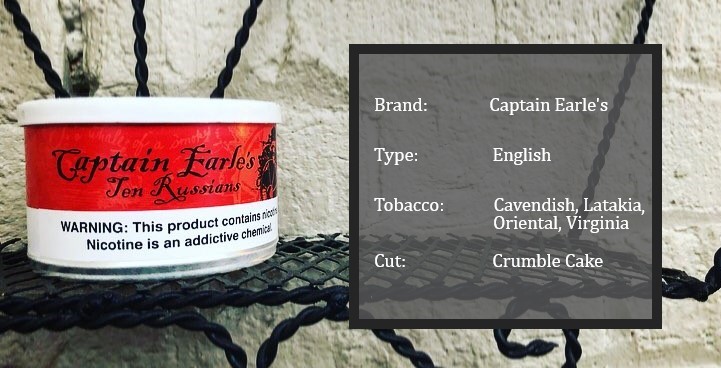 I've never tried Captain Earle's before, but I do know this is supposed to be quite a heavy English.

Apparently the Captain Earle's brand was originally blended by  Cornell & Diehl for a tobacconist. Still a C&D production, the Captain is on the high seas now, bringing his blends to a port near you.

Have I ever mentioned how much I love a crumble cake? There's something so satisfying about breaking off a piece and rubbing it out. Anyway, I took some notes while opening this one up.

No sweet notes in the scent, very smokey, earthy. A little musky. It paints a picture of having just entered an antique store, having rushed in to get out of the rain. Why? If only I knew.

Beaks apart very easily as one would expect from a crumble cake.

Ten Russians did seem to have more moisture than I expected. Not very moist, but with Cornell & Diehl non-Aromatics I guess I expect drier, like last week with Bailey's Front Porch and Billy Budd. I suppose it could be the crumble cake allowing much of the leaf to retain more moisture than is the case with ribbon. 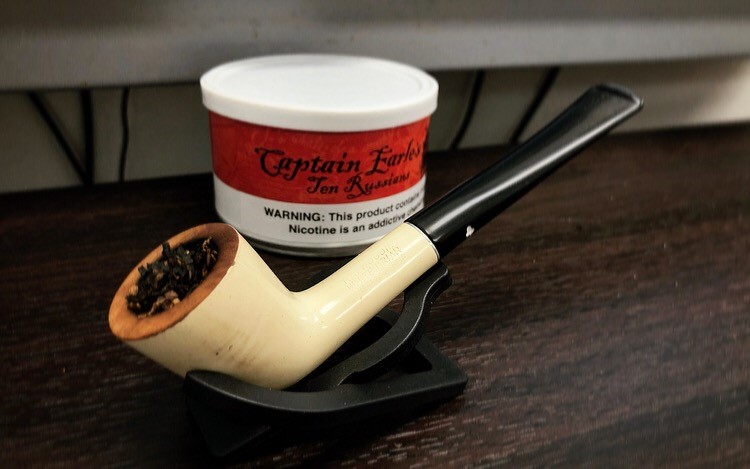 Another new pipe this week. Well, not so much new, but I "finished" sprucing up that Kaywoodie White Briar so that's been a fun one to smoke. I put finish in quotations because I'm still debating keeping the white or just going down to briar and refinishing it. It seems the brown on the sides is from the finish wearing away, not schmutz I can wipe off. I don't mind it much, but I also wouldn't mind giving myself more work just because, well, it's fun.

Had some restoration firsts too—redoing the stem inlay and applying pipe mud. Someone who had this one before was a little aggressive with the reamer at the bottom of the bowl. But all in all it's smoking quite well. Very open, easy flow and lighter to clench than I would have thought. 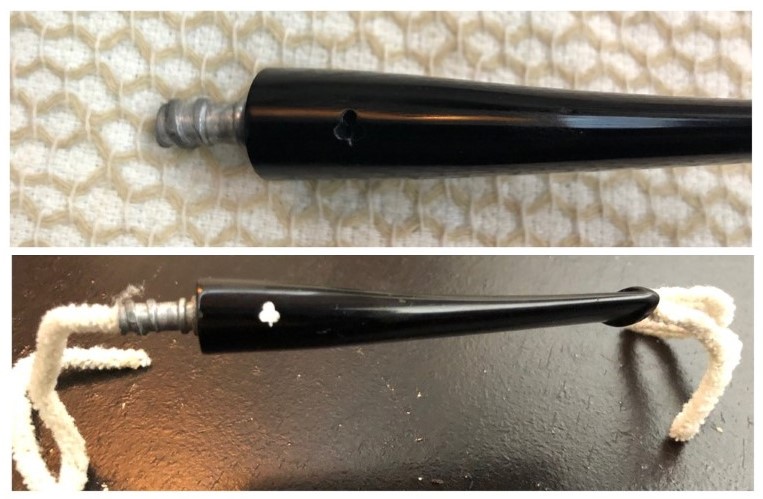 The moment you take a puff of Ten Russians, you know just what kind of smoke you're getting. Up and front, show stopping Latakia. It's Prince's guitar solo to While My Guitar Gently Weeps at the Rock & Roll Hall of Fame in 2004. Sure, there were other people there, they've set a foundation, but their time to shine is not today—not this stage.

I'm not sure if that's too niche a reference. But if you haven't seen it, do yourself a favor.

Basically, big Latakia. Might as well be Saint Latty's Day next week.

Okay before my standard for what constitutes a joke finds a new low, I'll call it curtains for this entry.

The nic hit is substantial but it's really just the collective weight of flavor, nicotine, and body. Often there might be a taming factor in a blend like this but the good cop in this good cop bad cop routine is stuck in traffic and you're getting pummeled.

Let me be clear, if you're into the Lat bombs you'll probably love this one. The Latakia is rich and woody. Where a background singer may be able to get away with being a little flat here and there—the tension muddled in the mix—the lead has to be right on.

I can't tell a whole lot of what's going on beyond the Latakia, but you know there is structure to the blend, and it brings out the best part of those smokey qualities.

It's Friday afternoon and I just had one more smoke of Ten Russians before wrapping up on this week's column. I have to say, there's something I really like about an assertive English blend in a corn cob pipe. I don't know why exactly—just do. And the Dagner Poker from  Missouri Meerschaum is one of my favorites. 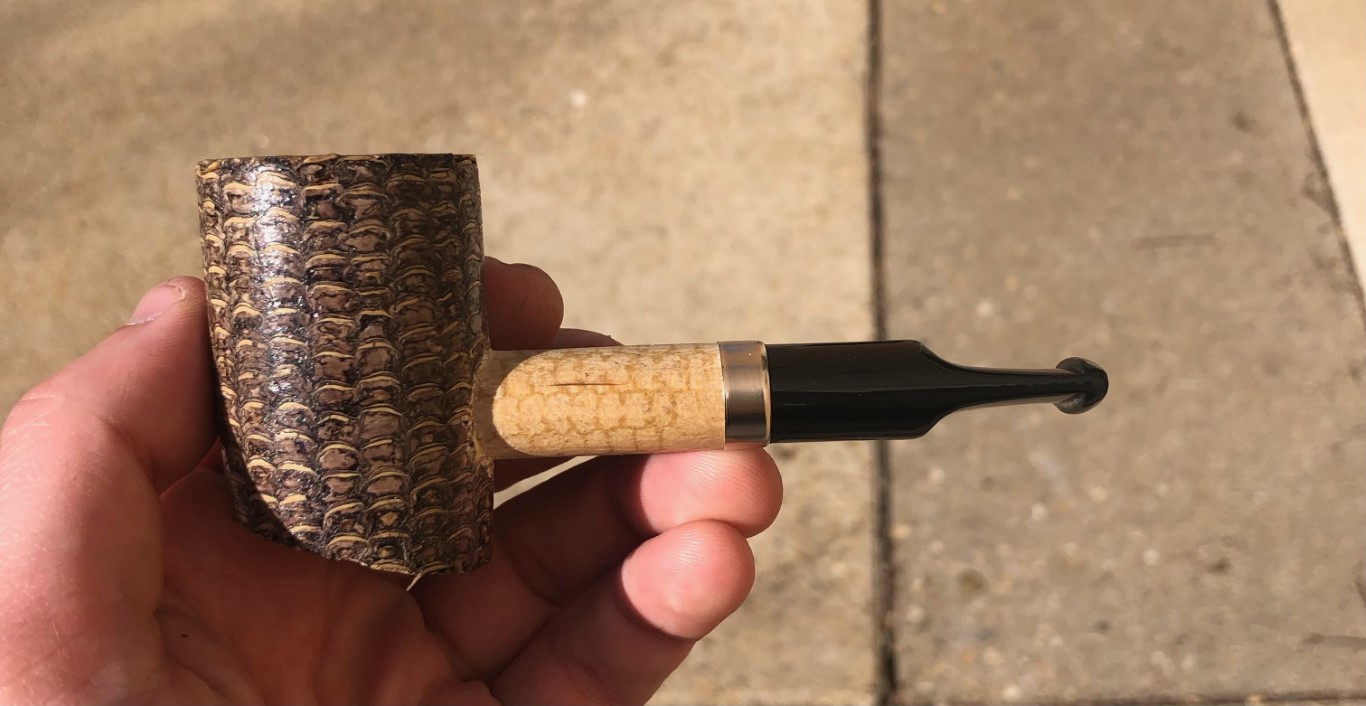 That just about does it.

Thanks again to all those who have been reading and those who have reached out. As always; feedback, advice, requests, corrections, friendly hellos—lay em on me at GregR@TobaccoPipes.com.

This week I did receive a suggestion in my inbox, and I think I'll take it. Credit to Jason for the following signoff, thanks Jason! 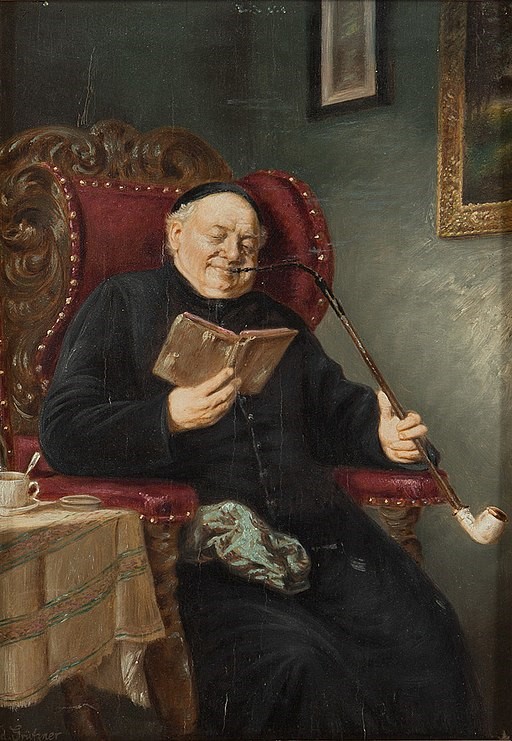 (Oh yeah, I'm also entertaining the idea of closing with a fun pipe smoking picture each week. We'll see how long I can milk the public domain.)