The last two weeks I've been enjoying a brand new blend, and an on theme blend for the week to come—Chris Morgan's Jackalope and Missouri Meerschaum Independence Day. On top of that, I've had a few cigars in the past two weeks, and for our latest addition to the Tobacco File template, I'll give an account of one stick that really stuck out to me—Romeo Y Julieta Reserva Real Nicaragua Robusto.

Beyond being a new mixture, Jackalope is one of three debut blends from Chris Morgan Tobacco. Of course, Chris Morgan is an established name in the hobby, being the craftsman behind Morgan Pipes and co-hosting the Beyond the Pipe podcast with Sean Reum, another great artisan in our tobacco pipe world.

Jackalope is something quite different for me—a stoved Virginia plug. If you've read some of the Tobacco Files, you'll likely know I love my Virginias, so I'm very interested to see what the stoving process has brought out of these Bright leaves.

From the tin note I get earthy, barnyard, herbal notes and some grass and citrus.

The plug is pretty densely pressed but you won't need a knife to prep. It easily strips away and is rubbed out into broadly dissected leaves.

I make a point to crumble some of these larger leaves down to get a good variety of sizes. These aren't like the ribbons you'll get from a crumble cake or the strands from rubbing out flake—I can't recall working with a cut that's quite like this, so it may take some adjusting to find the right pack.

My Sasieni One Dot is usually reserved for Latakia blends but it was just calling me today for some reason, so it can have the inaugural smoke.

Just that first glimpse from the charring light was really something. A dark berry sweetness and definitely some on the grass and citrus side.

The charring light proved to give an accurate impression of what this blend would be, but nuance comes out of these uniform leaves. Citrus, dried fruit, and caramelized sugar are all on display, spread generously about the palate. 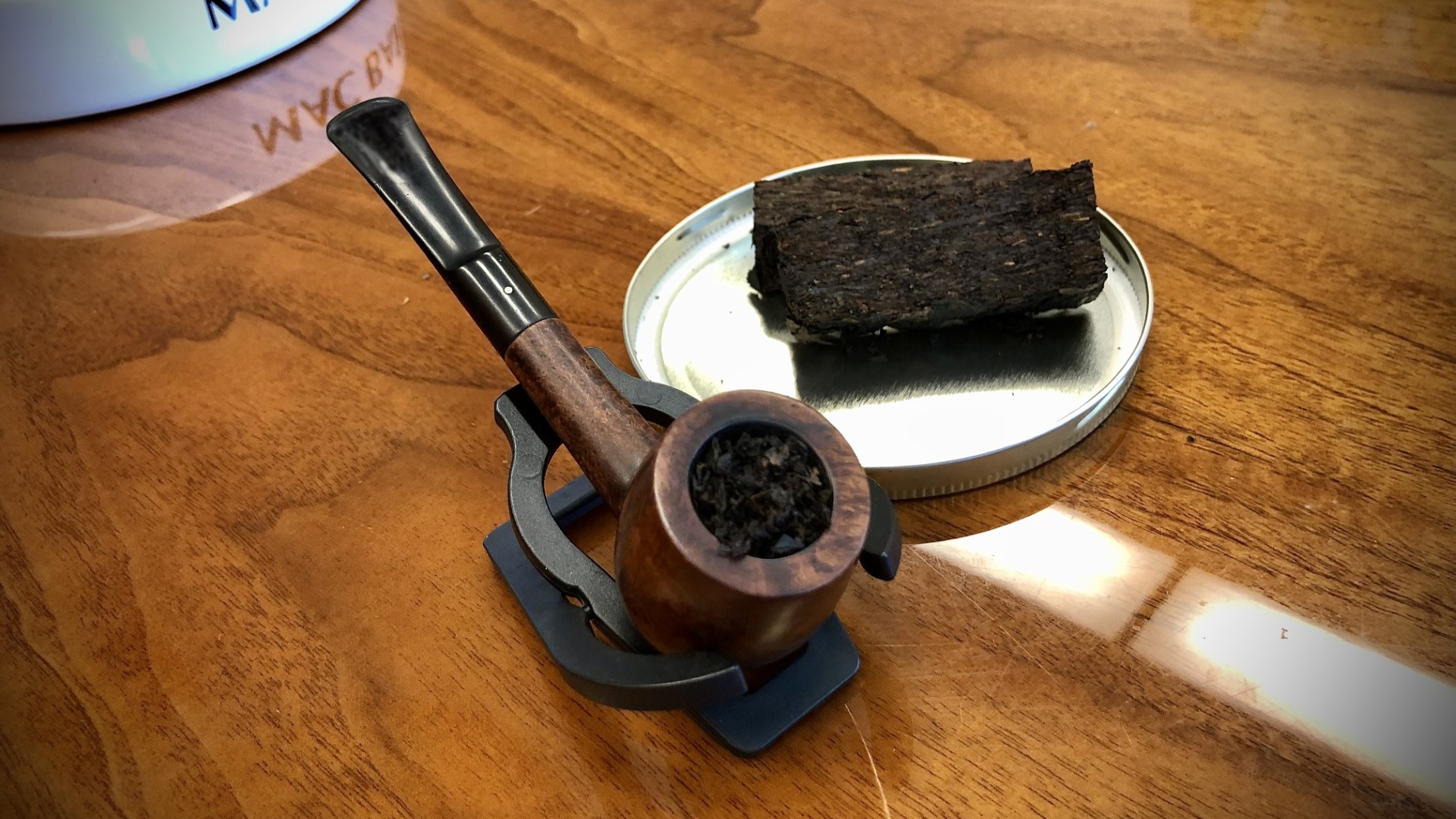 Jackalope has a deep and rich flavor but muted. Not in a negative "watered down" sort of way, but a delightful mellowness. Mellow and rich may seem contradictory, I think of it kind of like artwork made with pastels—not bright and garish, but still colorful.

There's a slight dry, earthy, incense on the retrohale.

I enjoy this very much, it's a great blend, it's different, and dynamic. I have the feeling it gives a pretty straight forward impression. I don't know that there will be much else to discover, but I'm looking forward to more smokes of Jackalope nonetheless.

I have had some issues getting the pack right. I've been especially cautious about packing too tightly, because I thought it might easily wedge and restrict airflow due to the sort of chewy consistency of the leaf (I promise I'm not chewing it). But in trying to be mindful of this, I sometimes miss that sweet spot and overcorrect. It's not difficult to pack these larger bits too loosely.

Not a big issue, just a less familiar presentation asking a little amenability of me.

Having smoked Jackalope in a few different pipes, my assumption that it would have a consistent flavor profile holds up. I don't seem to get more or less out of it from one pipe to another. Which is to say, it’s a guaranteed pleasure to this palate. 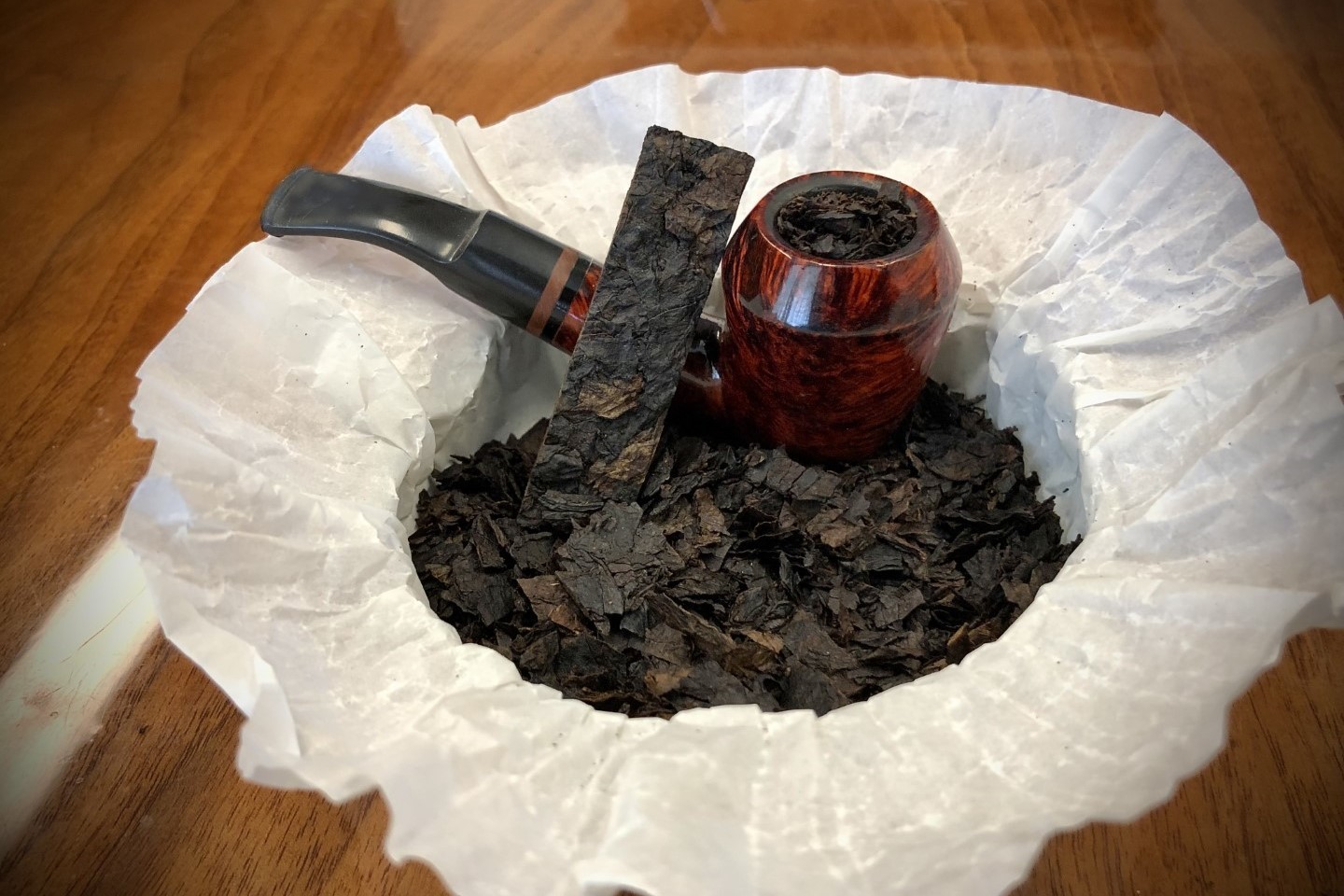 Seems like a lot of Tobacco File blends have been asking for the bigger pipes lately, so I'm making sure to enjoy the little guys. This afternoon I'm packing up my Lorenzetti Avitus, a tried and true smoker. Also, it's one of my favorite pipes to have while I'm typing away, a perfect clencher. I usually like a bit larger airway than this one, but for a small pipe that's great for clenching, I feel like it may be an asset to ward off too hot a smoke from the consistent stoking.

Although, that's not much of a concern with Jackalope. The burn is slow and easy to keep cool, which is to be expected from a tobacco that's gone through the stoving process.

At any rate, it may need some relights, but I've noticed doing my charring light procedure twice actually sets things off to a very even and consistent burn, so I've been doing that.

I believe some of the oils, which carry much of the nicotine content, are lost in the processing of the bright leaf, so no surprise this straight stoved Virginia blend is mellow in strength.

Circling back to my tasting notes for Jackalope—like I said, consistent, so no grand developments to speak of. Fruity, berry skins, bready, and I get a sort of herbal tea with lemon note. I get a little more of an earthy tone mellowing the sharpness of the citrus down the bowl, but other than that bit of evening out, the profile keeps consistent through the smoke.

It took some time to get my pack and preferred dryness down with Jackalope, but now I've got it. Wish I could say how I approached it—what exactly I tweaked to get it right—but some things are just a matter of doing, the muscles will pick it up.

Anyway, Jackalope has been a seriously fun blend and I'm certain it will find its way back on my shelf. It isn't complex, but isn’t without its layers, and it has a character all its own—dynamic, deep, flavorful, and cool burning. Great as a light-it-and-forget-it blend, but an all day smoke for sure.

I should mention again, this is one of three blends that recently launched Chris Morgan Tobacco. There is also Bayou Buck (VaPer cake) and White Rabbit (English cake). I think Jackalope gets my vote for favorite, but I've been enjoying all three the last couple weeks, so I highly recommend if any of those seem up your alley. 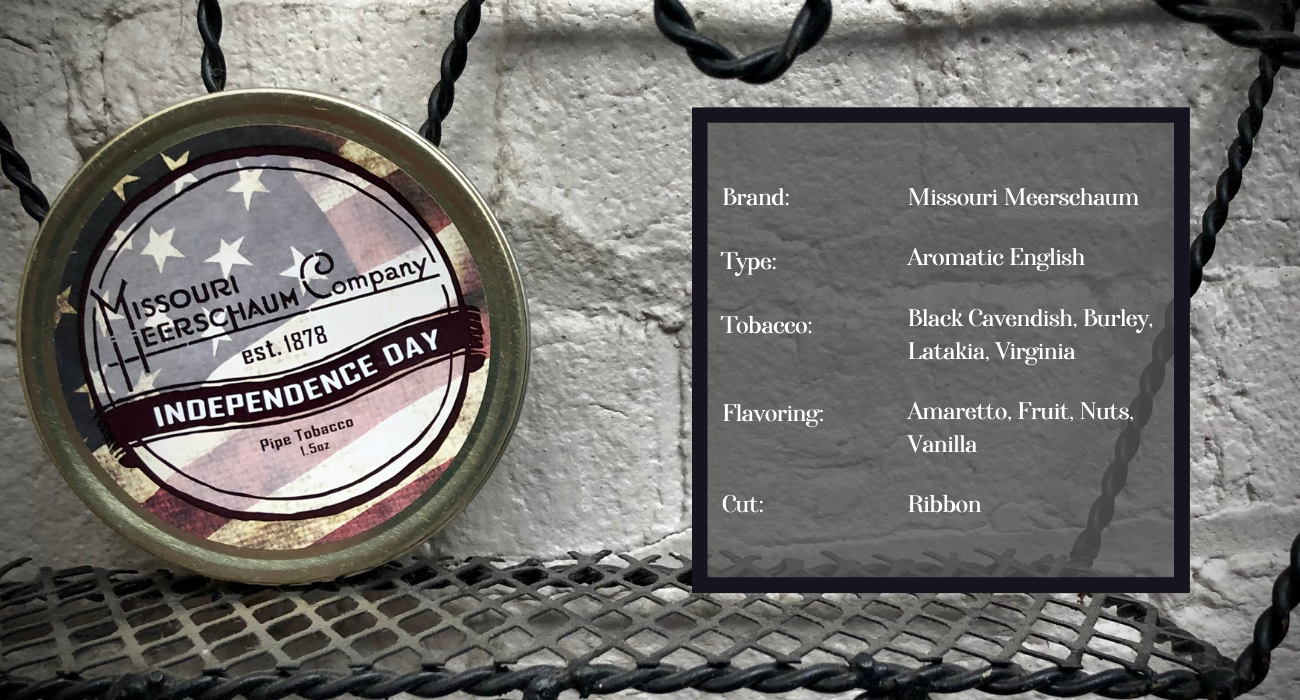 You know, when I decided to feature Independence Day as one of this column's blends, I had no idea a new one was coming out (which is this blend as a crumble cake). There sure is a lot of new going on. I'm excited for Sutliff Crumble Kake no. 4, which hit the shelves today. Then we have Seattle Pipe Club’s Hogshead, Haunted Bookshop Cake from Cornell & Diehl, and a few others in the pipeline.

No real surprises with this tin note—Latakia smokiness and vanilla. I pick up a bit of cocoa as well.

The cut is a pretty straight forward ribbon. Dark brown and nearly black medium length strands. Comes a little moist but no more than you'd expect from an Aromatic. I put some aside to air out for about thirty minutes. 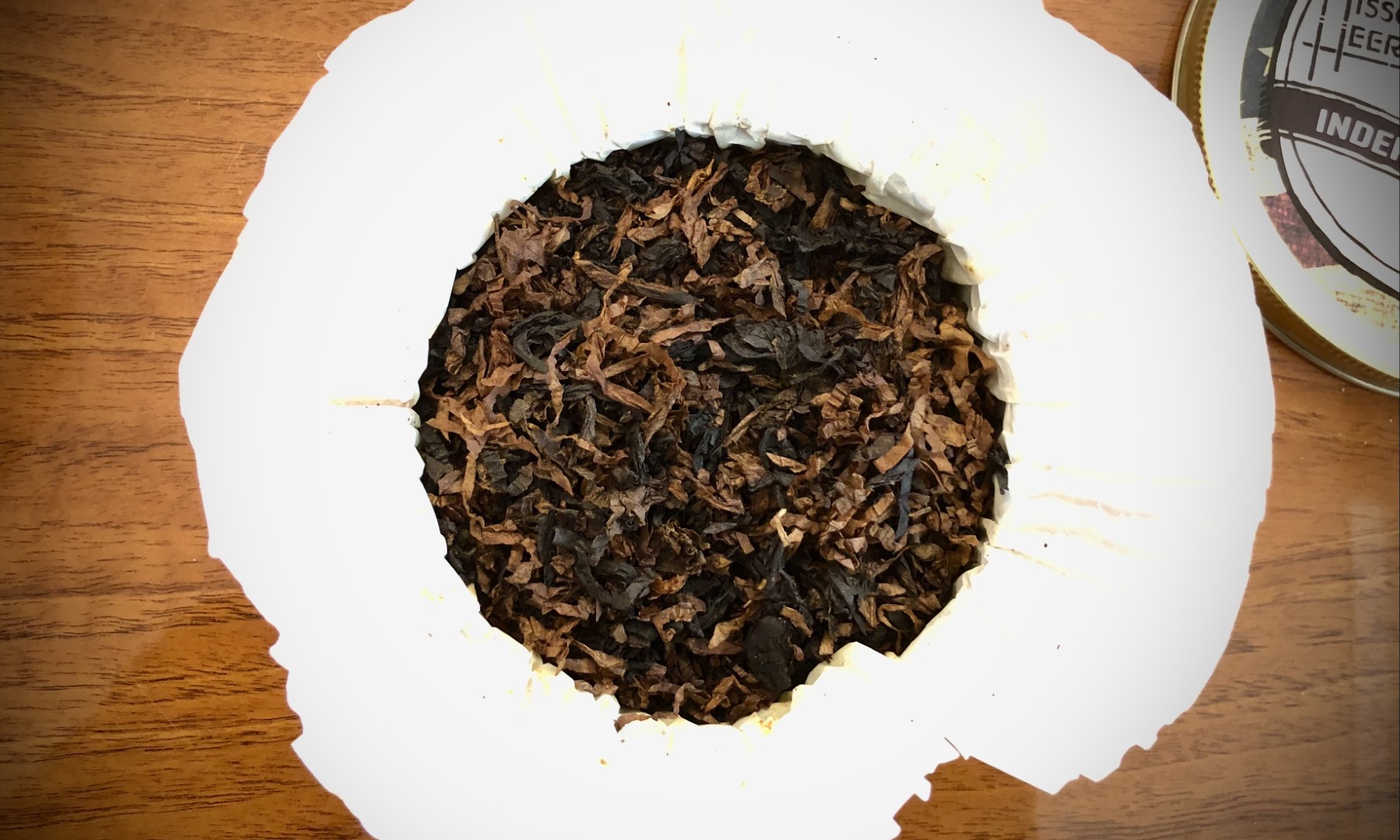 Upon lighting, I immediately get exactly what the tin note promised—smokey, leathery Latakia and Vanilla top flavoring. The two leads are pretty evenly matched. As I keep smoking, I pick out a bit of a licorice note, which may just be the result of the darker, leathery side of the Latakia interacting with the vanilla top flavor. A nice nutty flavor abuts. 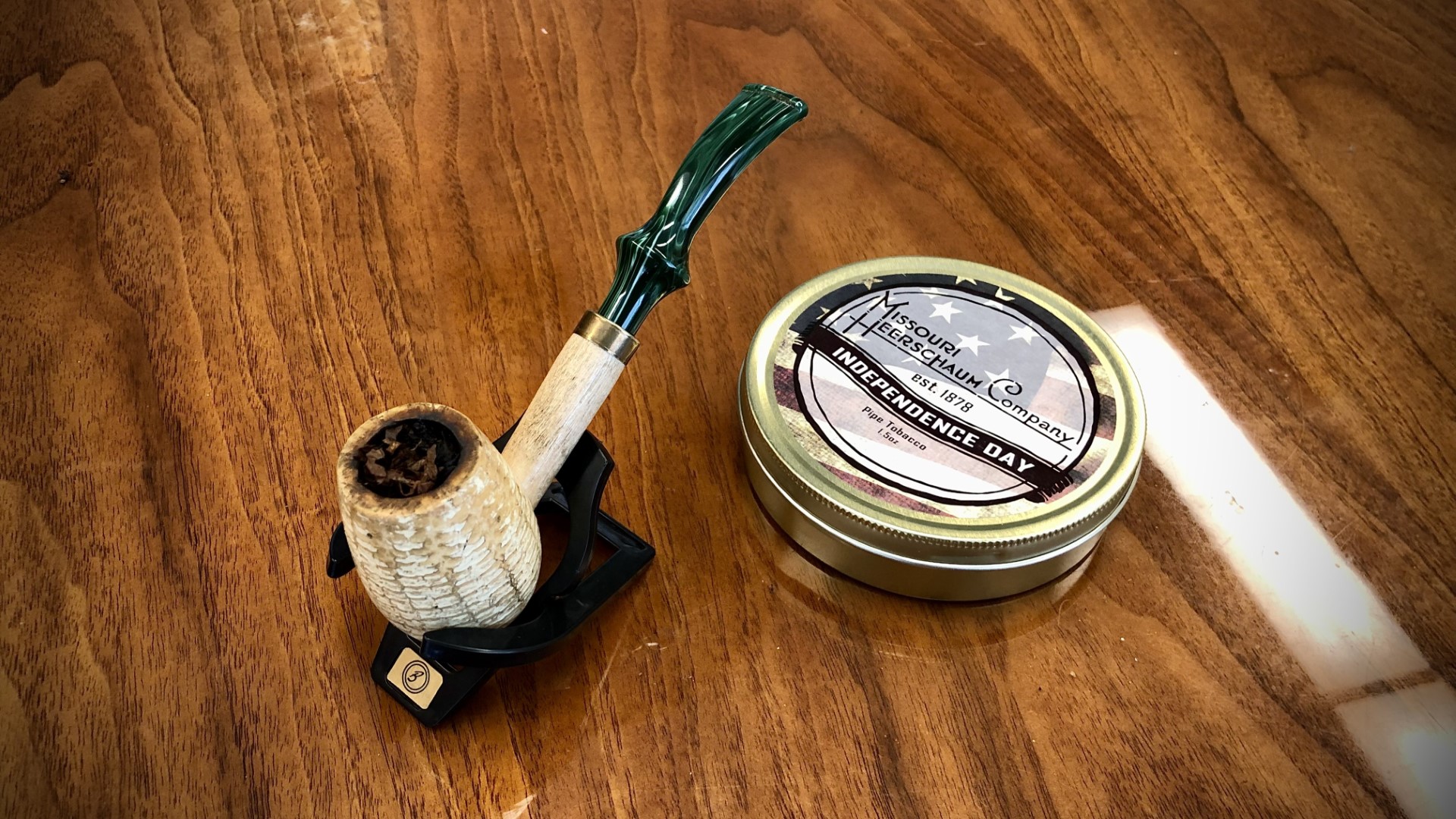 At one point I realized I left my water bottle upstairs so I go to retrieve it. When I come back in the room there's a wonderful vanilla note aloft. Maybe I should try leaving and reentering more often to get the room note. Although, someone sensitive to Latakia may disagree, I find this to be a great smelling Aromatic.

Perhaps I'm not totally sure what amaretto smells like...

I notice some bready, nuttiness from the Burleys, but don't pick up on much that I can attribute to Virginias. At the moment, Independence Day seems to be a relatively straightforward Aromatic English. It doesn't seem too complex, but I'm interested to see whether some of the nuances peek out as I get more familiar with the blend. I often notice that can be the case with Aromatics—as the dominant flavors become more familiar, what's behind them comes through a bit more.

There's little strength to Independence Day, but it does offer a good deal of flavor. Perhaps that's the theme of this column.

I've had Independence Day in a few more pipes since the first smoke, and am now enjoying it in a clay pipe to really try and sift through the profile.

I've been noticing the amaretto flavor with much more clarity my last few smokes.

Unlike an English blend of bolder flavor, retrohaling doesn't seem to unlock much else in the profile. Perhaps much of that can be attributed to the Oriental component common to English blends, which Independence Day doesn't include. This one's all smooth—no spice in the olfactory.

To me, a big plus for Independence Day is how nicely the earthy side of the English character holds up. I feel that's often lost in vanilla topped English blends—the rich sweetness overcoming the more subtle aspects of the profile. But with Independence Day, the topping is pleasingly sweet but not cloying.

That isn't to say it's teetering on the edge of being an Aromatic. It very much is topping forward, but it lets other notes through with a creamy smoke.

A favorite from the last two weeks was the Nicaraguan version of Romeo Y Julieta’s Reserva Real. The Toro vitola for this one landed a sweet #22 on Cigar Aficionado's Top 25 of 2020, though I'll be puffing on a good ol' Robusto.

Hope you all have a fun, safe, smoky Independence Day!