Hello and welcome to the second installation of this…series? Column? Maybe column is the right word.

Well, whatever this is, it is certainly What I Smoked This Week and I certainly smoked some things—spoiler, it was tobacco.

But if you haven't read the first column and want a little synopses of what it's all about, check it out here.

It's been a fine week in our tobacco pipe world as Sunday, February 20th was International Pipe Smoking Day. I hope you found the time to enjoy a smoke or several and could take advantage of some of the deals going on. I enjoyed it but I think the real gift for me came Monday evening

Last time, I wrote that I would be making sure to save some Escudo for the next warm, sunny day. Well, I got that opportunity Monday. I packed my Georg Jensen Granat 78 and was reading Ben Rapaport's An Intimate History of The Tobacco Industry, 1850 - 1920. 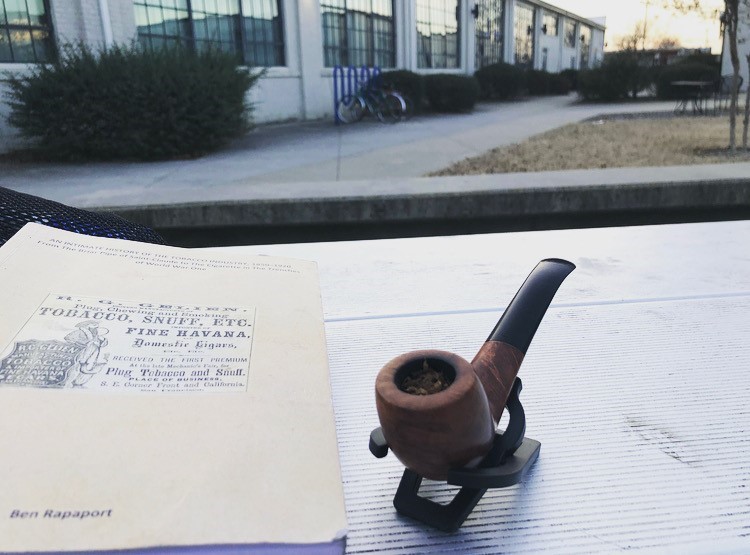 Maybe not very sunny by the time I was freed up, but that's alright. Just to go out in the warm air and settle in the courtyard with my pipe and book was a simple, but greatly missed pleasure—and Escudo was every bit of the companion to such an activity as I hoped it would be.

Also this week, I started trying to give some life to this old Kaywoodie White Briar. It's a shape #1 but seems to have had the slight bent stem replaced with a straight tapered one from another Kaywoodie. Hopefully next week I can share a much prettier version. I'm on the fence about whether to strip the white and refinish. If you have any thoughts, I'm all ears. 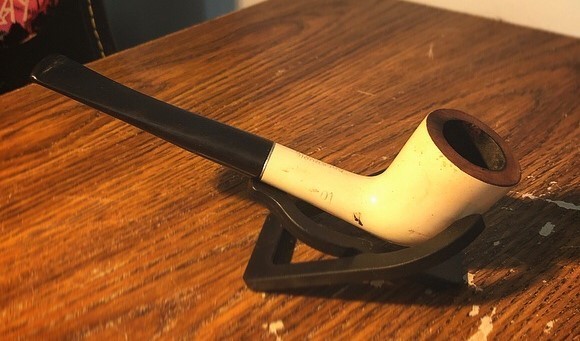 So, for this and next week, I’m doing all four blends in the Cobblestone Indulge series from Sutliff Tobacco. This week I smoked Vanilla Custard and Walnut Maple Pie. Next week will be on to Cherry Delight and Crème Brulee. Each is a treat-inspired Aromatic, so it will be a sweet time. 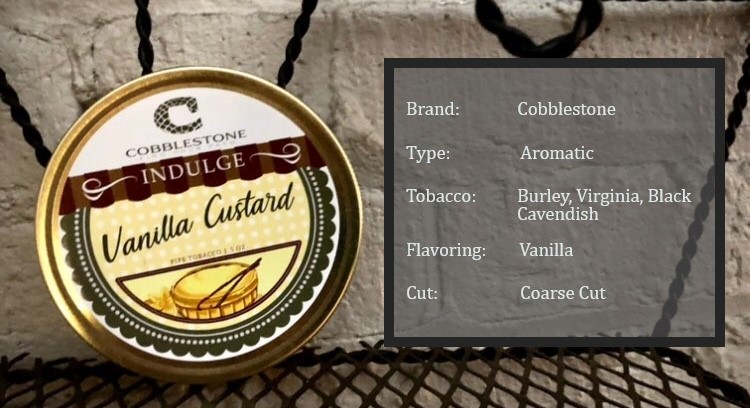 Well I'm in for a very Aromatic 2 weeks. I don't smoke Aromatics too frequently so this will be a bit different. But I've heard good things about the Indulge series, and actually have had a tin of Cherry Delight before, which I'll be smoking next week.

At this point I've had a few smokes of Vanilla Custard.

The tin note is a strong vanilla aroma just upon opening it, but getting close, I noticed a little bit of a medicine smell—kind of like cough syrup. Sometimes I get this with Aromatics, and it's nothing a little airing out won't usually take care of. I fluffed the ribbons up out of the tin a bit and let it sit. Not long after, all I could smell was vanilla and cream—very sweet. Instantly reminds me of Sutliff Z92.

I set to drying out some tobacco for my first bowl. To me, it's a bit tricky to gauge the right dryness for an Aromatic blend. It's going to feel pretty moist from the top flavoring, so my "feel" for it doesn't translate from non-Aromatics so well. Despite that, after about 40 minutes of airing out I packed a bowl into my Molina Barasso 108. It took a flame very easily and needed only a few relights through the smoke. 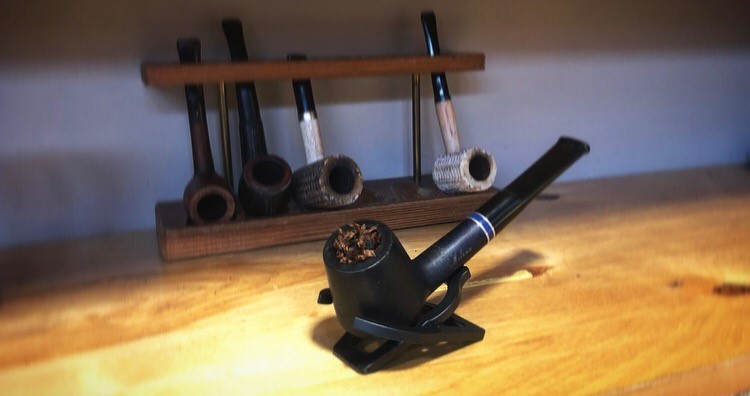 Vanilla Custard burned smooth and slowly throughout the bowl. The taste is quite aligned with the tin note, vanilla and cream. There's little tobacco flavor to speak of, but I believe I picked up on some of the natural, honey-like sweetness from the Cavendish.

As far as strength and flavor, it pretty much falls in line with what you'd expect from this sort of Aromatic. Generously flavored, very light, little nicotine.

Not much different to say, I think these Aromatics are pretty upfront with their profiles, there's not much wrestling. But sometimes that simplicity is nice, and it sure has been through this rainy week being limited to enjoying a smoke in the few awning-covered areas available.

I have to say, for a well coated Aromatic, this one isn't threatening tongue bite. The Black Cavendish brings out a dense, silky smoke even with moderate sipping making it easy to get the rich flavor across the palate without pulling too hard or constantly puffing.

Vanilla Custard reminds me of some of my first pipe smoking memories—summer river days with that Molina (my first pipe) and Z92 (my first blend) and half a pack of matches sacrificed to a single smoke. Memories I'm always happy to be whisked away to.

With the frequency that I smoke Aromatics, one tin can go a long way. So I really only keep a couple tins or Ball jars of bulk around at a time. The only reason I can't say I'll be re-upping on Vanilla Custard is because it doesn't really scratch an itch Z92 doesn't, which is one of the few Aromatics I tend to keep supplied. In a world without Z92, this would easily be a regular on my shelf. 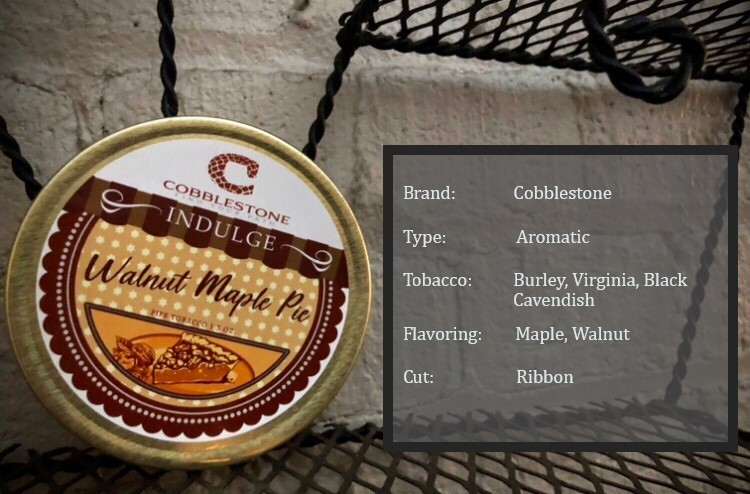 So far, Walnut Maple Pie has surprised me, it seems to have a few more dimensions than I thought it would.

First off, the tin note wasn't as one-note strong as similar Aromatics. I expected an onrush of pure maple but it was accompanied by a woodiness. Just like the Vanilla Custard, I gave it some drying time after which it was a very easy pack and burn.

The Burley adds some appreciated body to Virginia Custard, but in Walnut Maple Pie, its flavor really comes through too. Maybe something in the way the walnut top flavor and nutty Burley harmonize—there's certainly more to say of the tobacco component in this blend.

I think I anticipated something more like Cornell & Diehl's Autumn Evening, which is—to my memory—very rich with an authoritative maple flavoring. Many of Sutliff's Aromatics that I've tried seem to be of that kin, but there's a bit more of a complexity to Walnut Maple Pie. The toppings are forward and lead, to be sure, but a bit more subdued where it counts, the audacity of the potent maple not taking advantage of other flavor's subtelty. 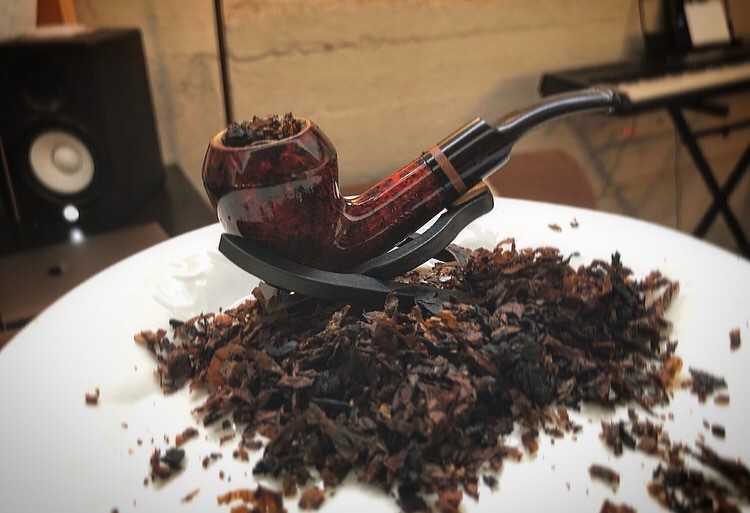 I was wondering if I would get much of the walnut at all from this blend. Of the two top flavorings, it seemed the richness of the maple might shroud the walnut. The space made for each is certainly the result of smart blending. The Burley and walnut are especially present through the retrohale.

Tobacco reviews often talk about the room note. To be honest, I don't feel as though I have a good sense of the room note of something that I'm currently smoking. Taste and smell are so intimately coupled that I don't think I can isolate them enough to find the edges of either. I've noticed that a reviewer will sometimes offer their wife's reaction to the aroma. Well I don't have a wife, but I do have a Chris and Sav.

Those would be my friends. At the park this evening—Walnut Maple Pie packed in my Missouri Meerschaum Legend—they had some great insights.

"That smells like Waffle Crisps," Chris informs me. He explains Waffle Crisps are a maple syrup flavored cereal. Quite specific, but they too are enjoyed in a bowl, so maybe it's just the right comparison.

Then Sav offers, "It does smell like waffles, I thought I was having a stroke."

I really know how to choose 'em.

Jokes aside, the maple fragrance was very well received.

I think this might be good to cut with an earthy non-Aromatic. Maybe a mild English. Might have to experiment.

All in all, Walnut Maple Pie is definitely my favorite Aromatic that I've tried in a while. I'm sure I'll keep some more around.

Remember, if you have any feedback, advice, requests, corrections, or just want to say hello, I'd love to hear from you—GregR@TobaccoPipes.com