We have another brand new blend in this Tobacco File, the latest in Sutliff's Barrel Aged Series—Crumble Kake No. 4.

Instead of doing another recently release or themed pick, for our second tobacco blend, I thought I'd find something on which there was very little information out there. I opted to write about Cobblestone Knight from their Chess Series, as this blend has no Tobacco Reviews entry, no tin description, not much talk around it—just a couple YouTube reviewers.

I'll have to omit the Featured Cigar for this one, it's just been a pipe-centric couple of weeks for me, but I have a few sticks I'm eyeing and would like to try, so we'll bring it back in the next File. 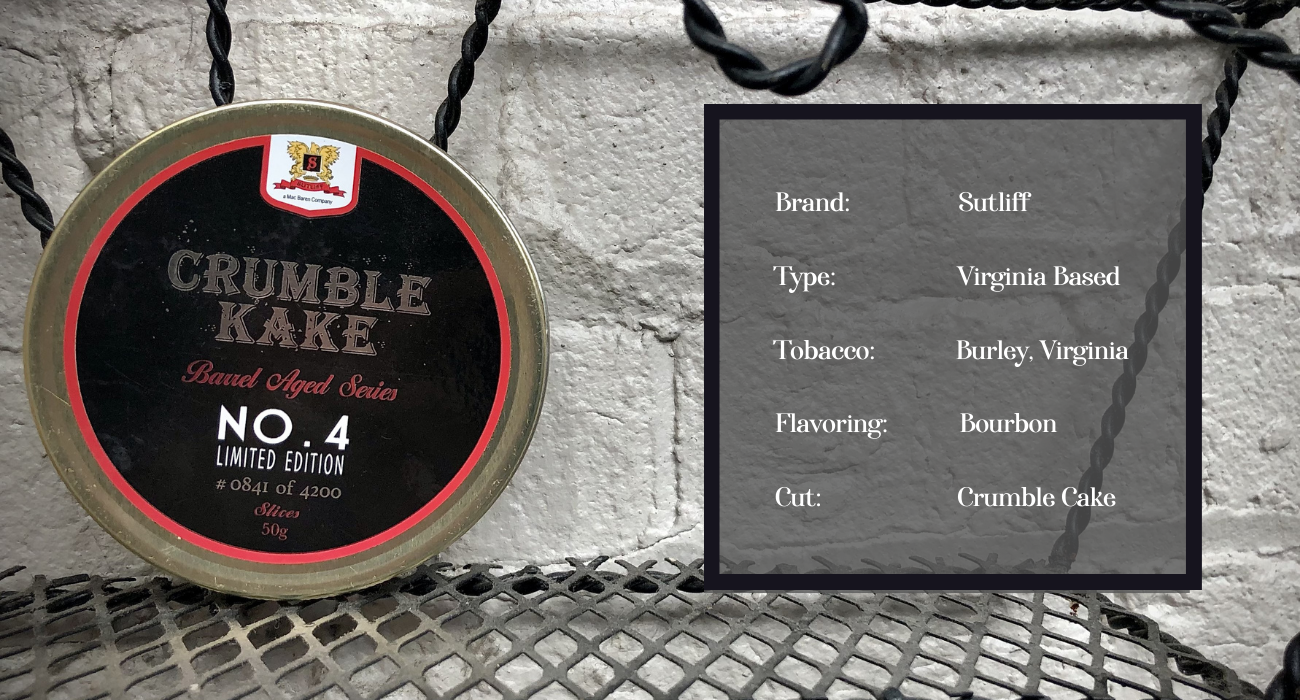 The latest in Sutliff's Barrel Aged Series, each of which has featured a different mixture sealed in a barrel that once contained a spirit. In this case that was bourbon but apple brandy and cognac barrels have been used in past iterations. Aged in these barrels for three months, the tobacco is imbued with the remnant flavors of those staves in an organic, slow manner more subtle than the application of top flavoring. 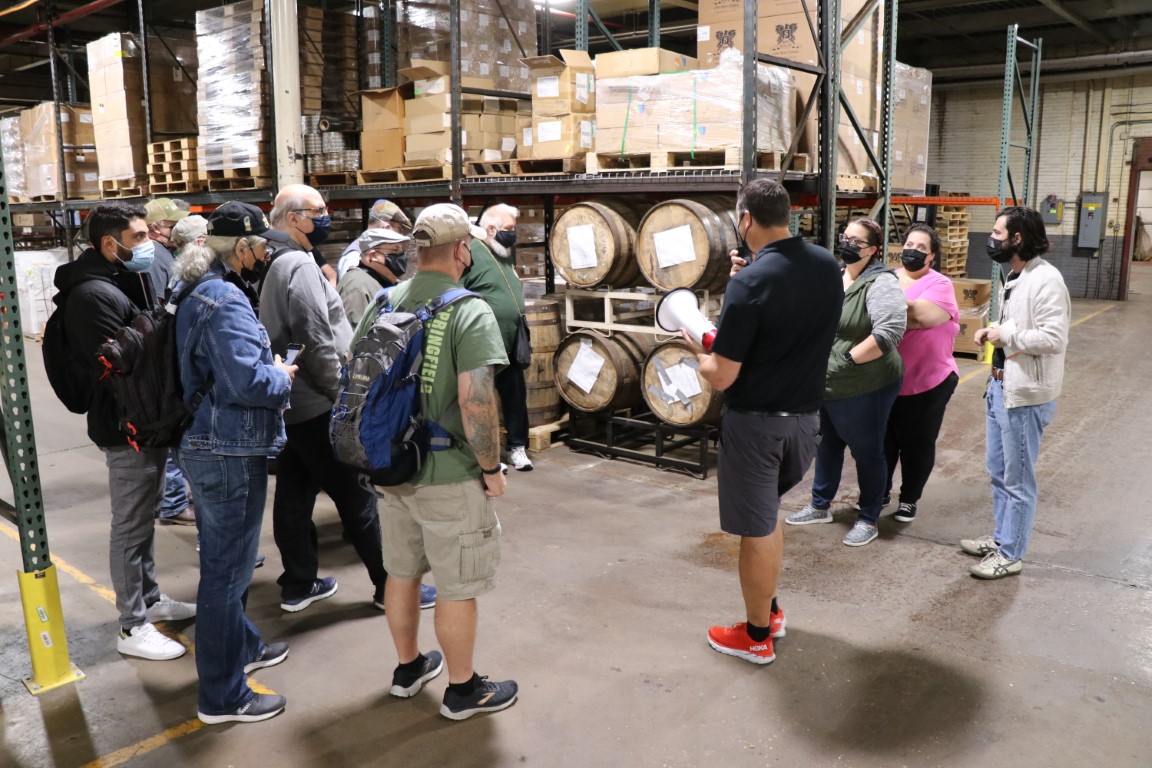 Pictured above is Sutliff president Jeremy McKenna giving a tour of the factory at the CORPS Pipe Show last October. Those are the barrels in question. Although, at the time, these would have been holding Crumble Kake No.3 and the barrel aged versions of Seattle Pipe Club favorites Plum Pudding and Mississippi River. 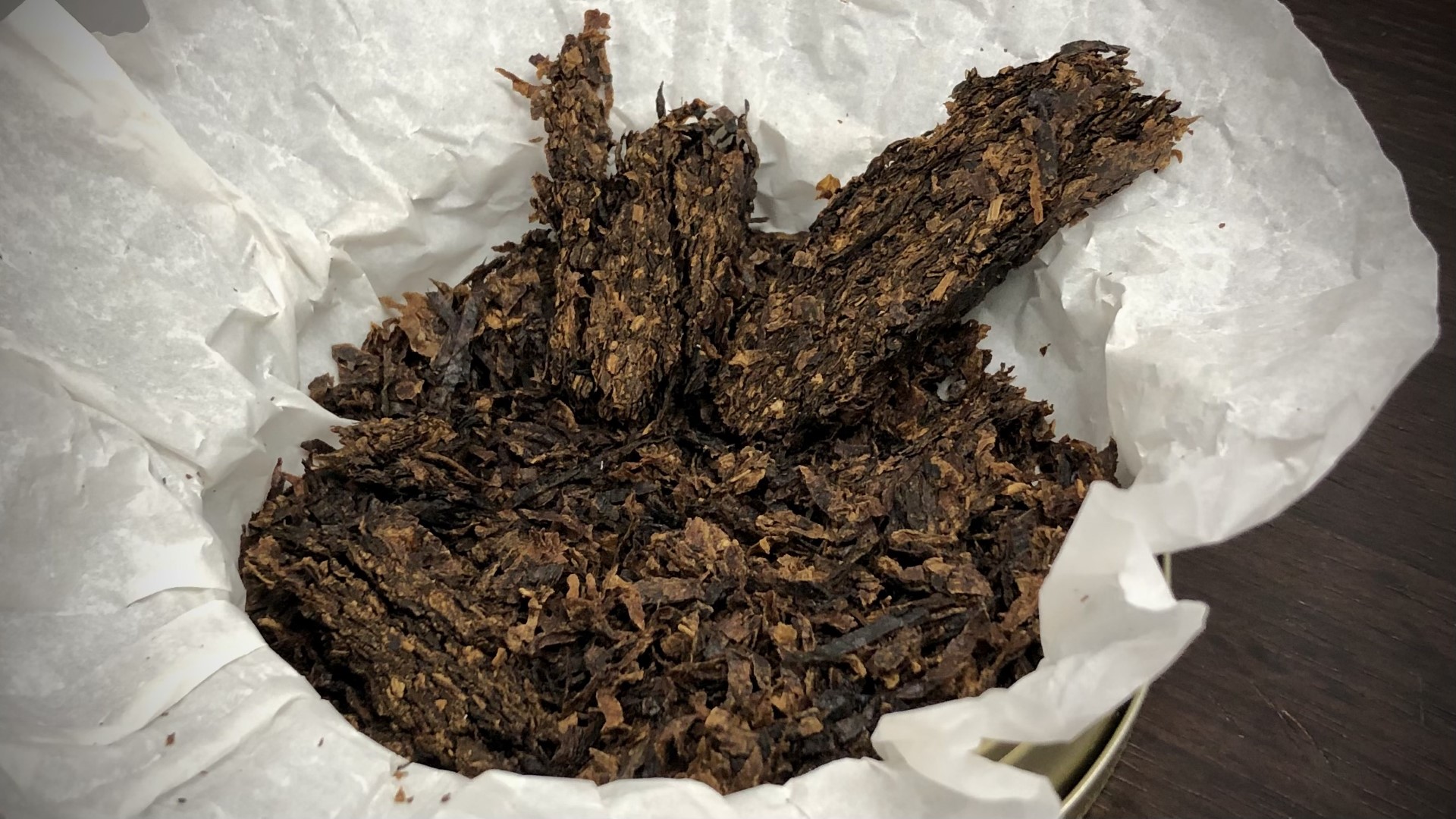 The tin note suggests a complex blend. Woodsy, tangy, fermented, a light smokiness from that fire-cured and definitely some of that boozy bourbon aroma.

I’ve opted to go with that old, trusty, first pipe for this one, my Molina Barrasso. I’ll also be enjoying a black coffee with this smoke. I usually feel inclined to keep a more neutral palate for that inaugural smoke, but hey, it’s just one of those days. Besides, I feel like coffee will be a fine complement to No. 4, and there will be time still for a purist approach. 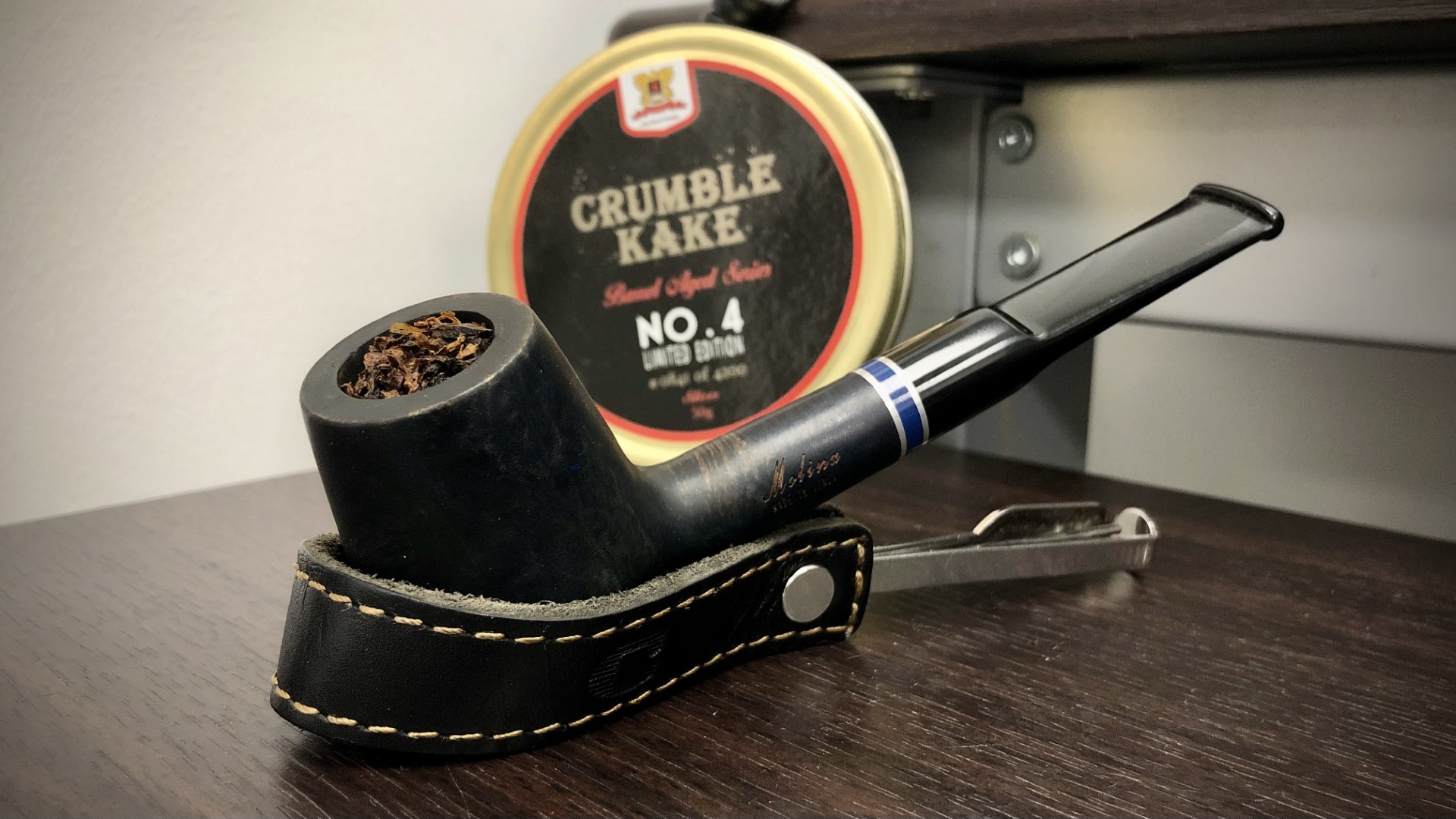 The charring light gives some sweet and earthy notes.

Already much to notice through the first few minutes of the smoke. Plenty of dark fruit, vegetation, some tart and floral notes. As the profile comes a bit more into view there’s a nice Virginia citrus side, but it’s mellow and rounded. A smooth woody and earthy retrohale.

The bourbon is really a wonderful rounding factor and is an eager ambassador between the earthy and sweet realms of the profile.

I don’t notice too much smokiness despite the fire-cured Burley, but there’s a little spice to that bourbon accent in which it may be playing a subtle role.

A pleasant floral-ness swells a bit in the latter half of the bowl and leans earthier toward the end.

Very enjoyable thus far, but feels as though there will be much to unpack with different pipes and other variables from smoke to smoke. I certainly feel a little more drying time could show a difference. Not too long, but I smoked this basically out of the tin, so we'll see.

There’s something specific in the fruity side that I like, I wanna say apricot. But then again, “apricot” is a pretty fun word to say.

There’s an appealing oneness to this blend, though it’s complex. By which I mean, the contrast between the flavors aren’t so stark, they meld into another, not fixed disparately around the palate. I imagine that the barrel aging process has some role in that. 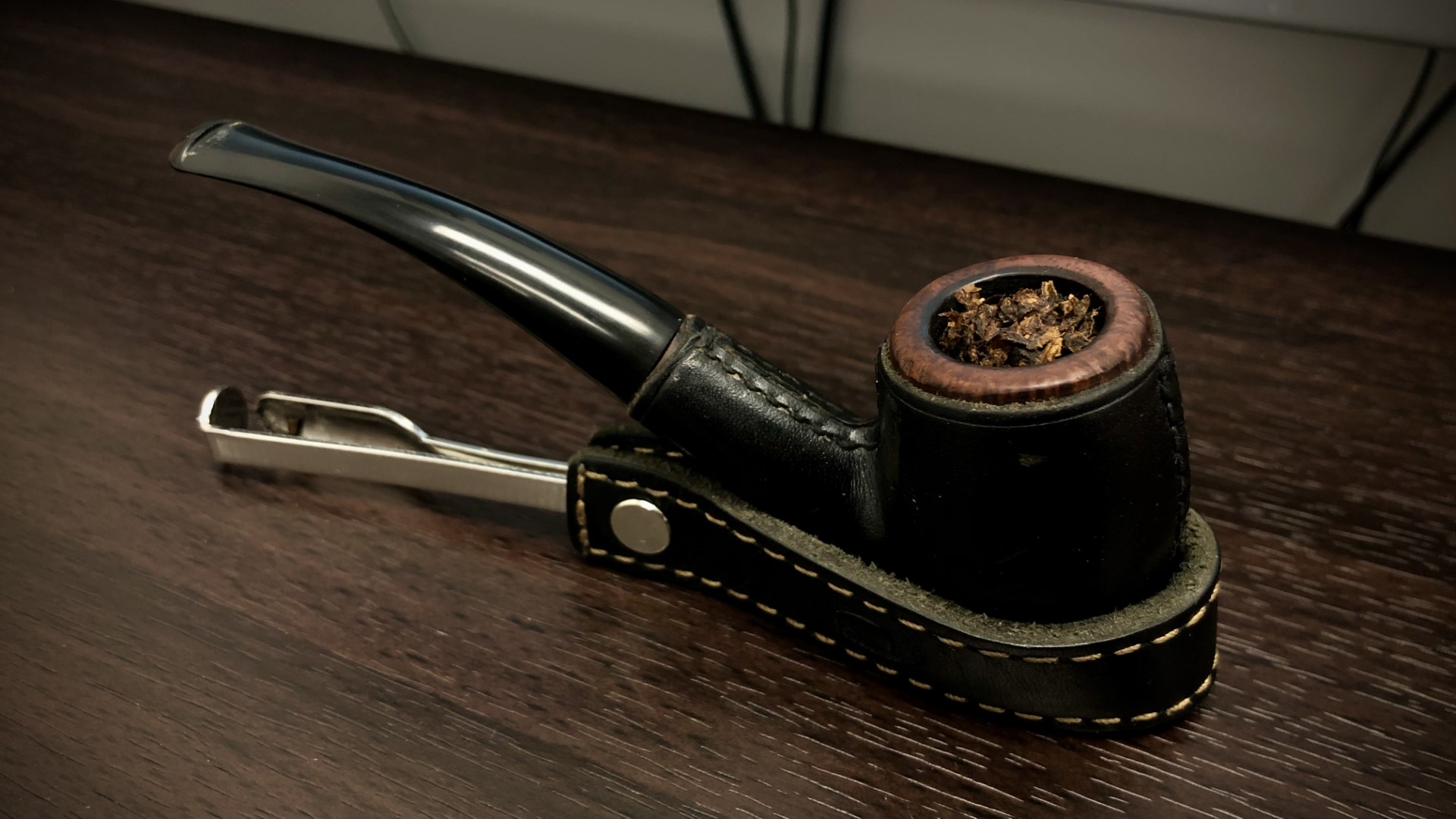 Anyway, from smoking Crumble Kake No. 4 the last week or so, I’m finding it exceptionally pleasant in my bent Longchamp. This leather-bound Frenchie is usually pretty reliable when it comes to complex profiles. I notice a little more of the smoky fire-cured presence, and a woody, toasty offering.

The last thing I'll note is that I've noticed, giving Crumble Kake No. 4 a bit more drying time brought more of the dark-fire out, at least to my senses. It's very nice and woodsy, somewhat smoky in such a way that you may describe a whiskey. But then again, maybe that association is the result of the fire-cured smokiness crossing with the bourbon element.

At any rate, Crumble Kake No. 4 is a delightful smoke. Sometimes a novelty can be employed in the hopes that the quirk alone will incite interest. What's clear with Sutliff's Barrel Aged offerings, be they from this series or other productions, is their commitment to pairing in such a way that is intentional and thoughtful, choosing the blend and the barrel with consideration to that final profile. 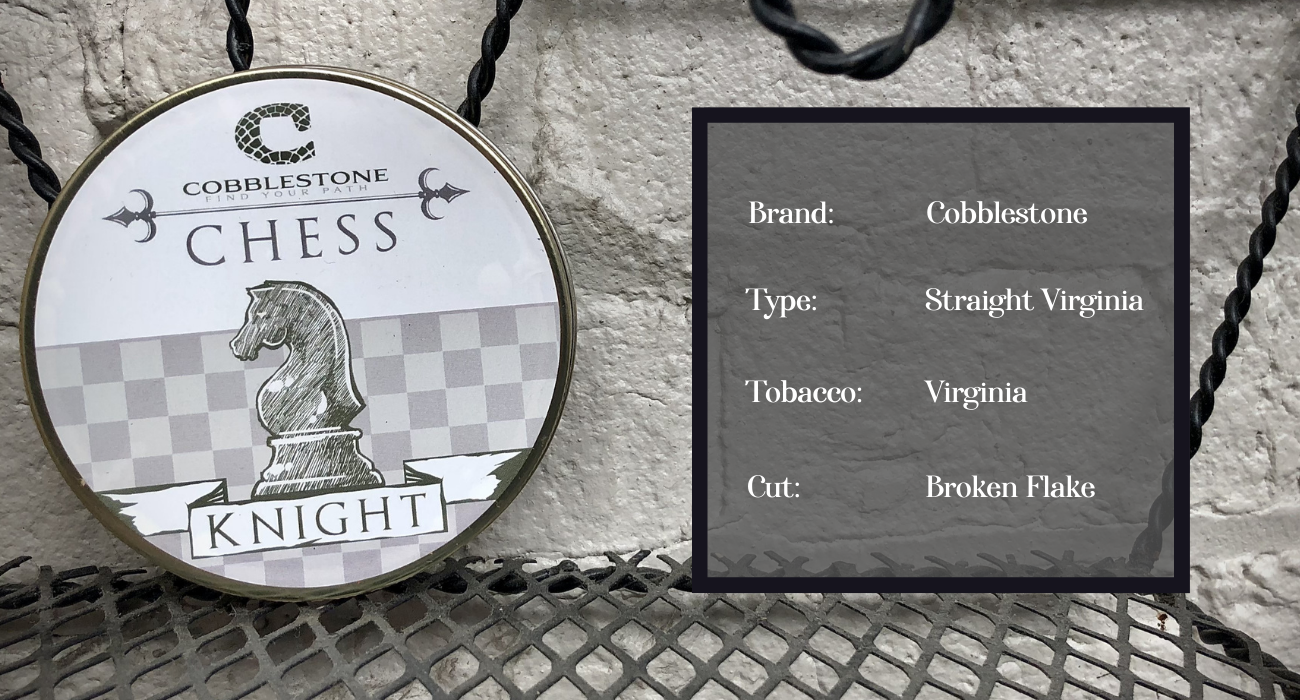 So, as I said in the introduction to the column, I chose Cobblestone Knight because I wanted to offer some notes on a blend for which information is limited.

I haven’t done any Cobblestone blends since the second column back in February in which I smoked Vanilla Custard and Walnut Maple Pie from the Indulge Series. But unlike the Indulge Series, the Cobblestone Chess Series isn’t blended at Sutliff, but in Germany at the blending house of Kohlhase & Kopp.

So here we have a straight Virginia broken flake. The emphasis is certainly on “broken” here. A shining golden brown leaf that’s ready to pack—it’s soft and springy, well hydrated but not very moist. 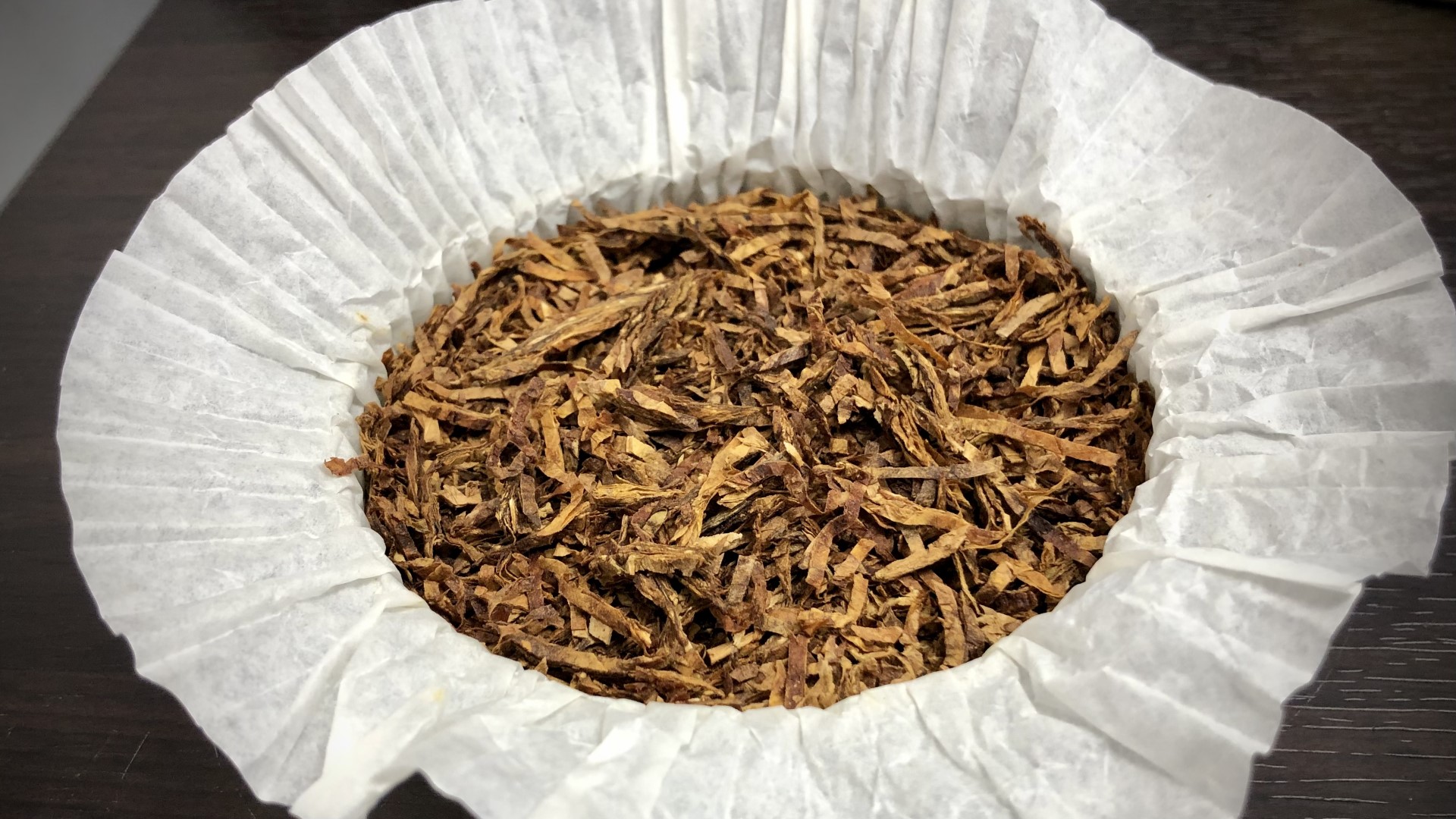 The tin note offers the grassy barnyard side of Virginias. There’s also a subtle fermented sour note, like walking into a brewery.

The inaugural light will be in the Weber Meerschaum Poker. 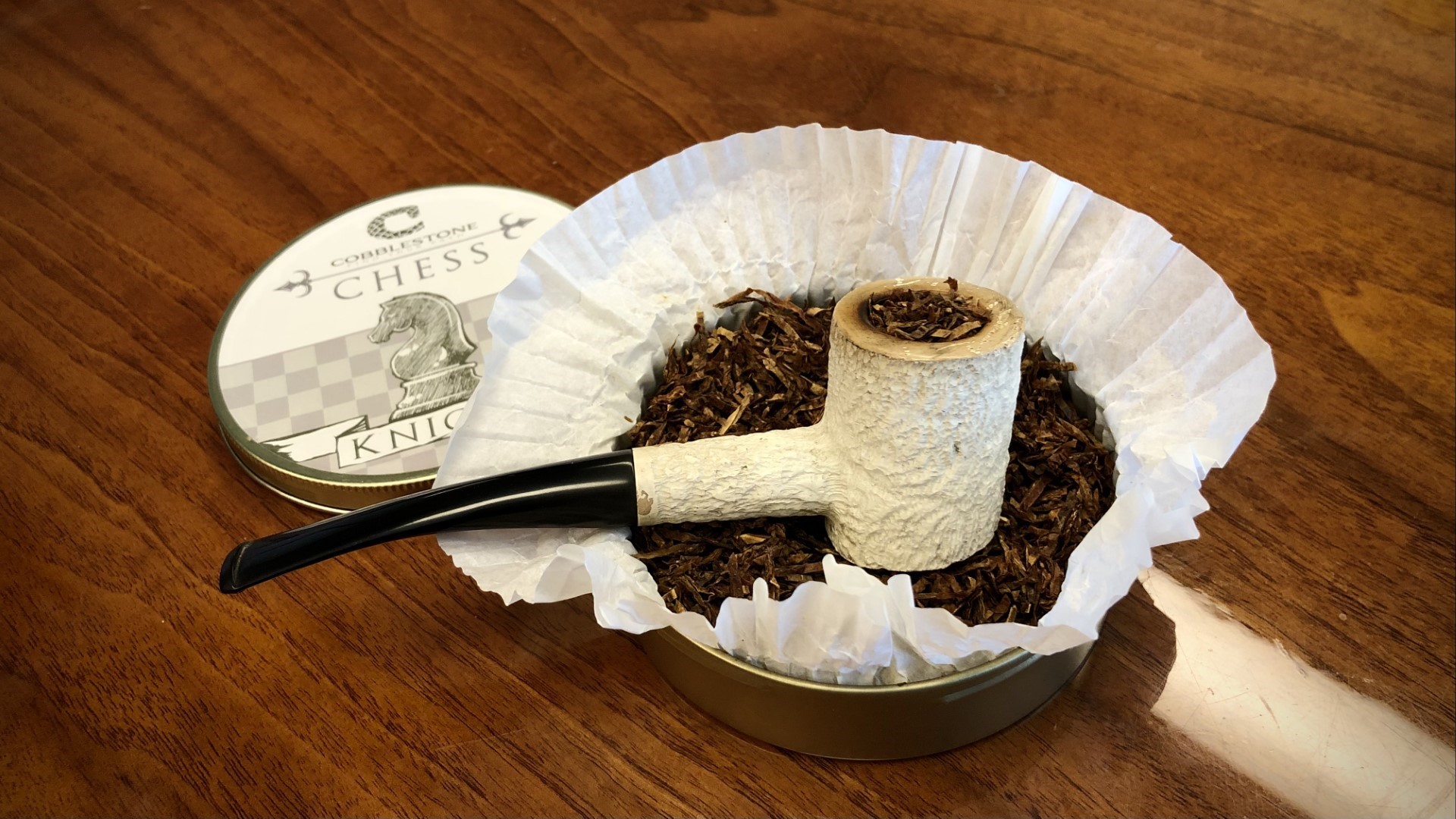 The first things I pick up on are bread, tang, and citrus—some very quintessential Virginia character. There’s some fruit but not with a depth like you might expect from Reds—more muted currants.

As I keep smoking there’s a natural honey undertone.

This is about as straightforward, no nonsense as it gets for a straight Virginia. No obvious topping, just natural, not complex, and consistent, with flavor that is delightful but subtle.

It does threaten to bite a little bit. But no problem if a mild, even cadence is kept.

Subtle and tasty Virginia. Grassy and sweet. Apparently, a nice room note as well. I was down at the river with some pals the other day and smoked this one and got some compliments on the aroma, so add that to the list of non-aromatics that won't make you a pariah.

All else I can really think to say is there is a maltiness I’ve picked up a bit in the background that I very much like.

I've enjoyed the contrast I've had since starting these two blends. They offer something different; No. 4 really giving something to dig through and Knight offering a simple pleasure.

And of course, any time we have a tasty straight Virginia, it's easy to start considering how you might experiment with it, if you're into such things. Well I tried something like that. Usually my little "experiments" have me sprinkling a little Perique or Kentucky in a Virginia—hardly experimenting. I thought I'd try going a little further this time around.

I've really been enjoying Jackalope, the new Chris Morgan blend which I smoked for the last Tobacco File. So I brought that into the mix, a Red Virginia, and about 8% Perique. After messing with the ratio a bit, I'm enjoying it—albeit, with a few edges I'm seeing if I can't round out.

I'll be back in 2 weeks with the first column in some time to not feature a Virginia/VaPer. Excited about these next two, though I love my VAs.