Sometimes the association between a character and their pipe of choice is rooted as deep as that of Linus to his blanket.

Stripping the young peanut of his baby blue companion and replacing it with a pleated satin ottoman slipcover would be an assault on the fabric of our culture. So too, we couldn’t imagine Popeye winding his swollen forearms to give Bluto a pounding with a long, ornate Churchwarden in his mouth.

On other occasions, beloved characters are no doubt associated with a pipe, but not so married to one style as Popeye is to a Corn Cob pipe. This can result in some playfully obsessive behavior for pipe lovers. We rewind, keep trying to pause at just the right moment where we have a clear profile of the pipe, and we study…”A Rhodesian? Maybe a Bulldog...I need a better view of the shank!”

You can find many forums alight with pipe enthusiasts analyzing and researching the pipes that get screen time, even if only long enough for a glimpse. It’s a fun game to play and I’ll be honest, there are pipe shapes and styles that I never found much interest in until a character cast them in a certain light, prodding a new appreciation.

So in that enthusiastic spirit, let’s go through some of the memorable pipe smoking characters in movies and see what their pipe of choice can tell us about them.

What better place to start but with the great Sherlock Holmes? Pipes are certainly more than an accessory. They offer a moment of levity, and if we’re lucky, clarity—their beauty, a cherry on top. Holmes takes this functionality to another level. Lighting up a pipe is an all but mandatory step in his detective process. A Holmes without a smoke is like a hound without a nose.

Both style and utility? It’s like Fred’s ascot and Velma’s glasses all in one.

(I wonder if Mystery Inc. would have solved their cases faster if they tried Sherlock’s pipe method? I suppose the Scooby Snacks work fine too.) 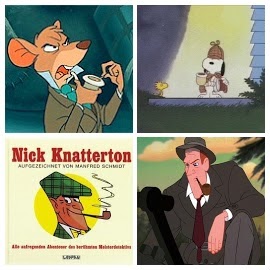 More than simply a staple of Holmes as a character, pipe smoking became synonymous with the detective trope in general, all thanks to the one character’s influence.

To be sure, despite its necessary function in his investigatory arsenal, you won’t see Holmes smoking a pipe that is anything short of classy. We can see that in Robert Downey Jr.'s adaptation of the preeminent British sleuth.

It seems he was especially partial to these Butz-Choquin Churchwardens. 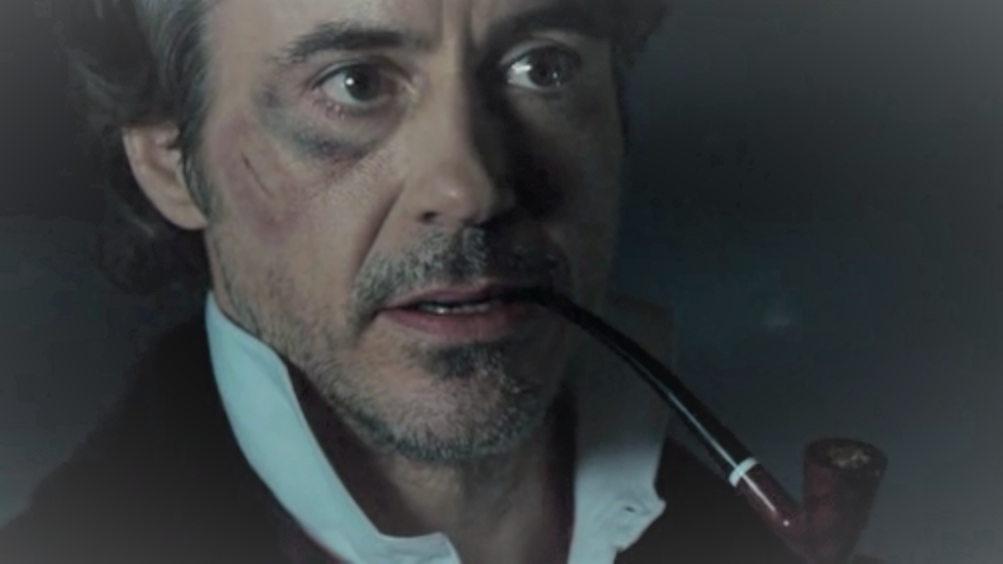 If you told me that Churchwardens would be the pipe shape for Sherlock before seeing the movie, I would have raised an eyebrow in suspicion. Seems more wizardly—more whimsical—than you would expect from the iconic detective.

However, something about these pipes—with their sophisticated trim and, in the case of the Calabash 1116, its ever so slight bend—hits the mark just right for Holmes. They’re just long enough for elegance without crossing into eccentricity best reserved for fantasy.

And hey, it makes sense that you might want a long stem keeping the smoke from your face when sniffing for clues. Ever the pragmatist.

Now, it may take some sleuthing of your own to find one of these exact models, but here are some pipes in our store that we think capture the Sherlock essence quite well. 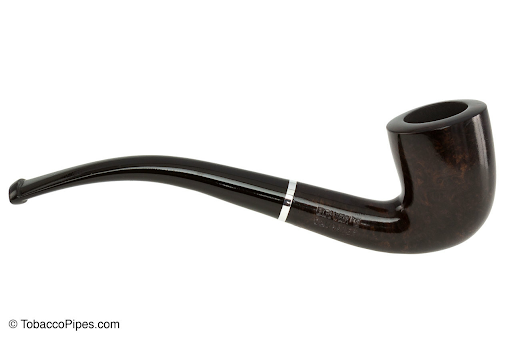 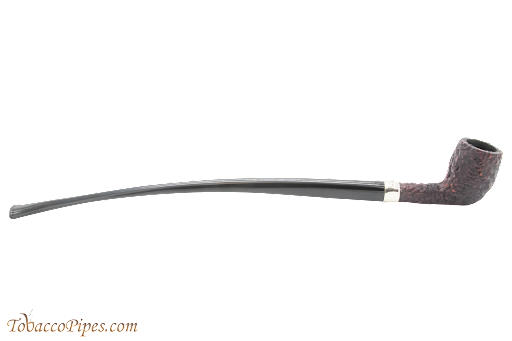 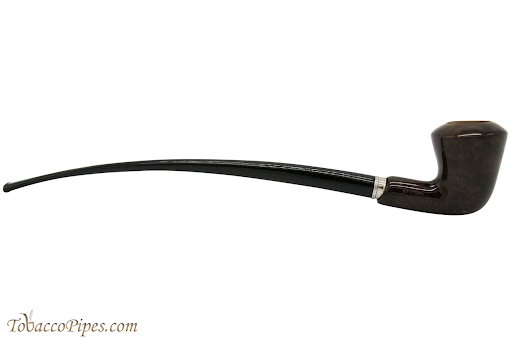 And though less resembling the RDJ iteration, Peterson Pipes have a phenomenal Sherlock Holmes line that offers pipes of all styles which elicit the aesthetic of the famed detective. 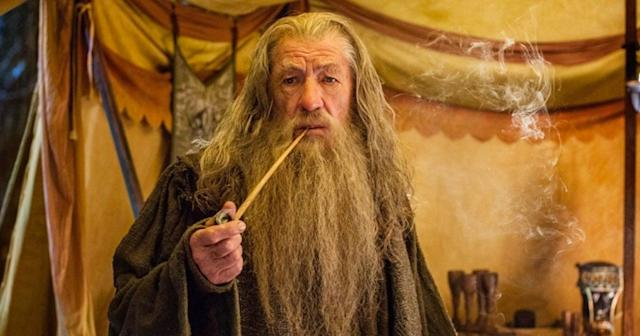 With all this talk of Churchwardens, it’s only reasonable to move on to the character who could never look unnatural with a long stem jutting from the drapes of his grizzled beard.

On to the great wizard himself. Even for Churchwardens, some of these pipes in The Lord of the Rings movies are quite long! In the case of Sir Ian McKellen’s Gandalf here, this aesthetic of a wizard with a long Churchwarden feels so right, that I’m inclined to believe this role created the trope. It feels like it even retroactively burrowed the association into the cultural consciousness. 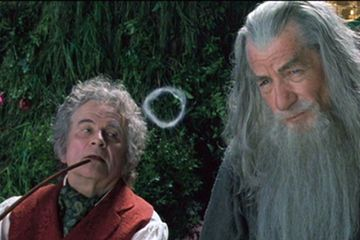 Don’t you have a faint sense that the pipe, specifically the Churchwarden, is just as much a part of the wizard trope as the hat or robe? That it has always been there?

I’m no Sherlock, or maybe I haven’t smoked enough pipes today to hone my detective skills, but I can’t find the association made prior to McKellen’s Gandalf debut in The Fellowship of the Rings—the release of which saw a large spike in the shape’s popularity that persists even now. (Maybe an influence on RDJ’s Sherlock?)

What’s more, Gandalf’s pipe wasn’t even described as being all that long in the books—it was described as a “short clay pipe,” while Bilbo’s, on the other hand, reached his toes. In fact, the Churchwarden wasn’t even reserved as a wizardly motif in the movies—it seems everyone in Middle Earth who wasn't an Elf (not big on the pipe-weed, those Elves) smoked a long stemmed pipe. But something just seemed so intuitive about the wizard with the long pipe. So much so that many refer to Churchwardens as Gandalf pipes. 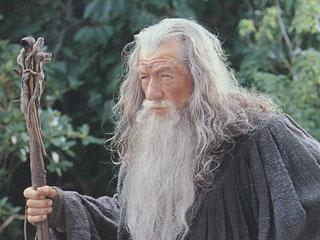 Unfortunately, we currently don’t carry a wizard staff with a convenient, built-in pipe holder such as Gandalf’s pictured above. But if you’re really looking for that wizardly churchwarden, check out a few favorites of ours. 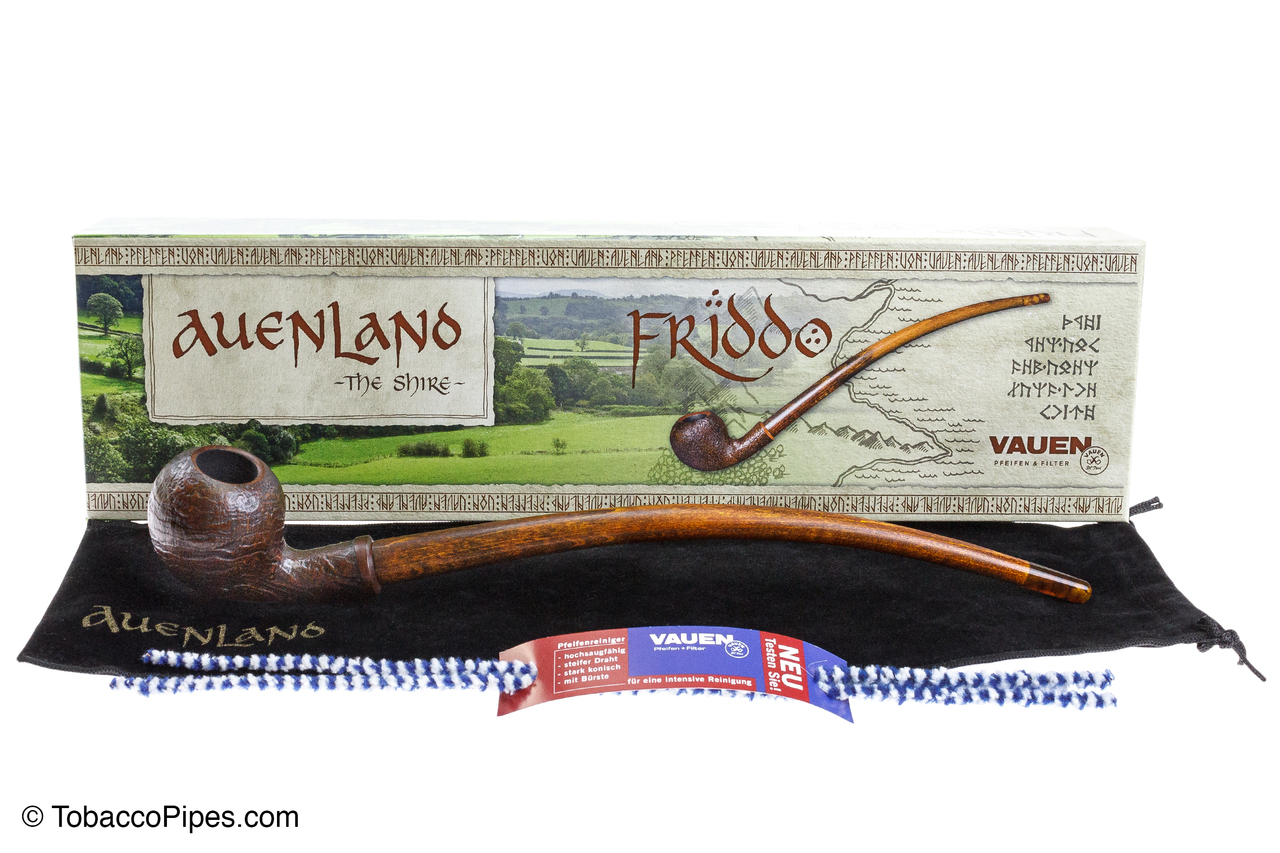 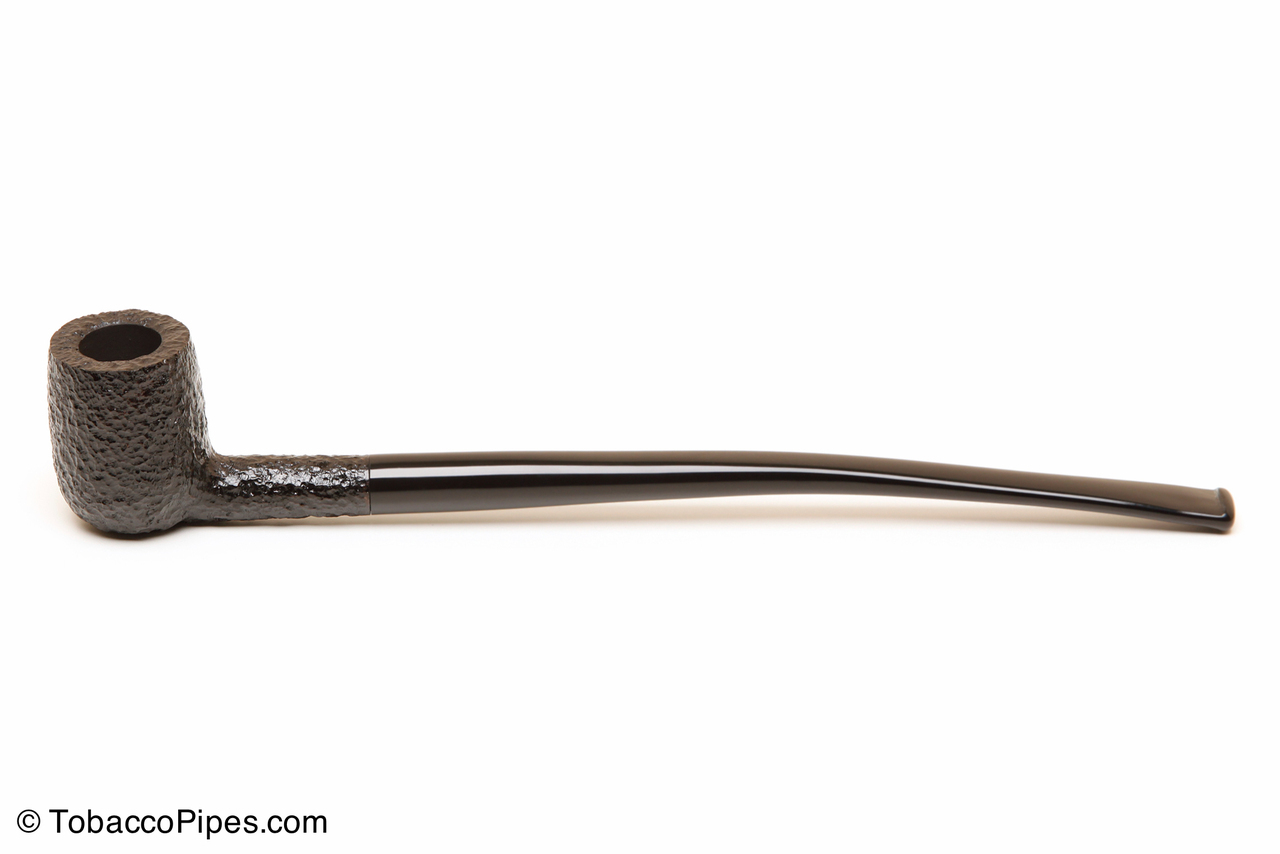 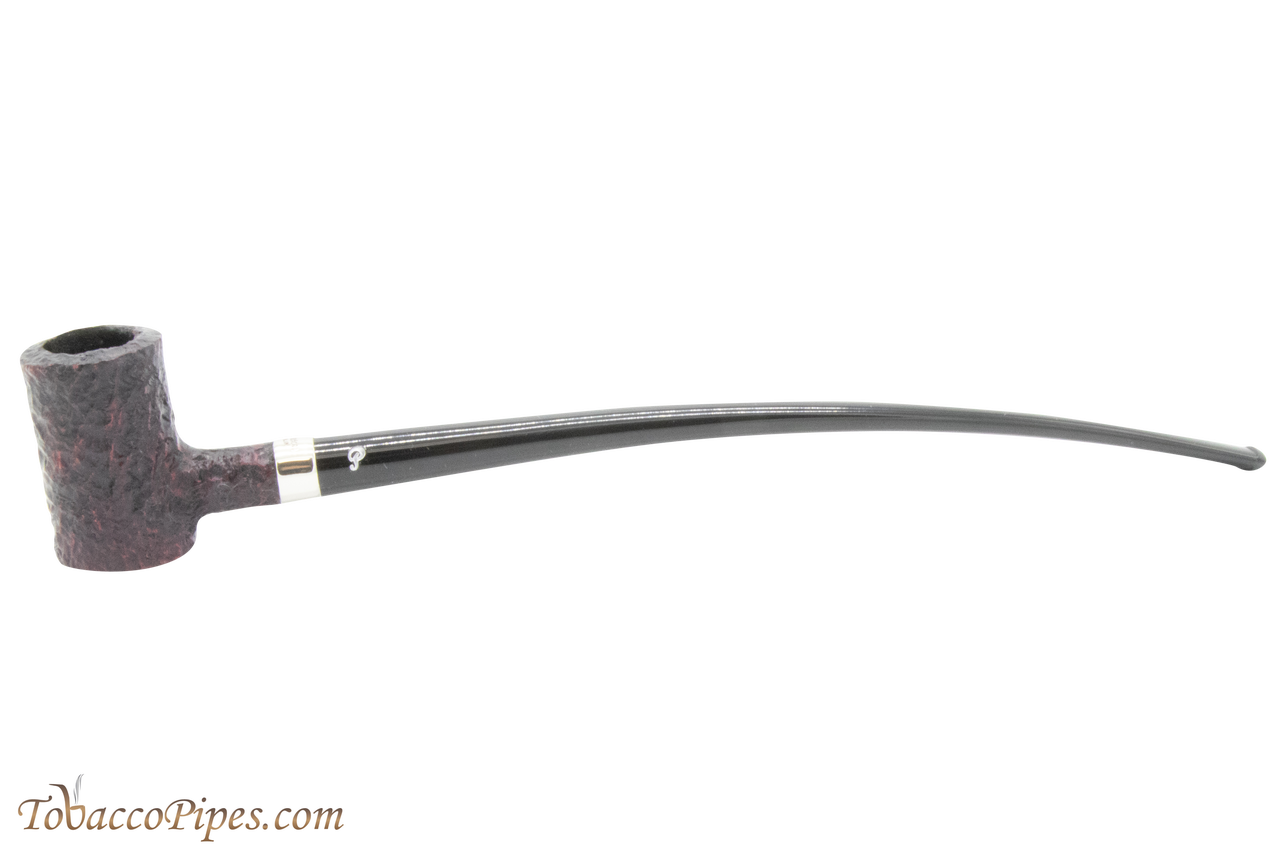 Vauen Pipes were actually hired to craft all the pipes in The Hobbit and Lord of the Rings movies, so if you find yourself in adoration of the craftsmanship, but like your pipe more on the discrete side, check out our selection of Vauen Pipes. These artisans have range, offering amazing pieces in an array of shapes and styles. 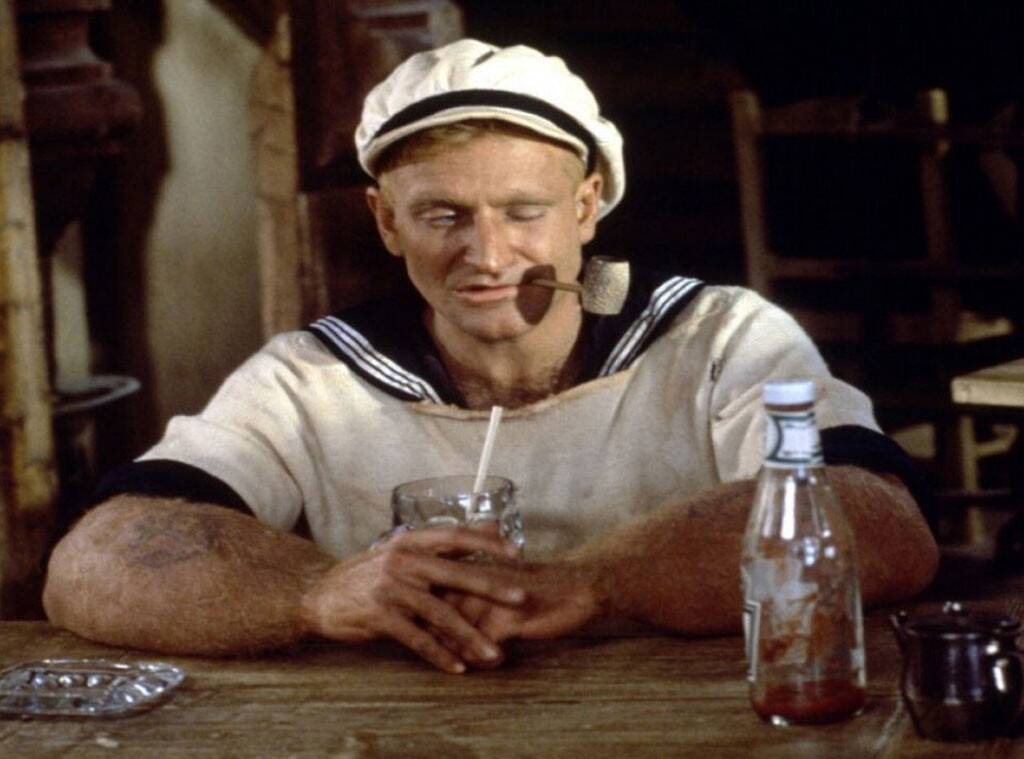 Speaking of pipe-puffing characters who basically created their own archetype, we also have the iconic duo of Popeye and his Corn Cob pipe.

It isn’t so often that the adaptation from cartoon to live action is done in a way that holds the magic—finding the ground between the sincere and the loony, and delivering it so earnestly, is a talent that few actors are as gifted at as was the late Robin Williams.

(And it must be mentioned that Shelley Duvall is the perfect Olive Oyl.)

So intrinsic is the pipe to the rugged seadog, even the cartoon 1980’s adaption, The All-New Popeye Hour, included the pipe (albeit, with Popeye explaining to his nephews that he only uses it for whistling). It just isn’t Popeye without the pipe.

I am familiar with the most recent iteration that has completely ditched the pipe for a whistle. 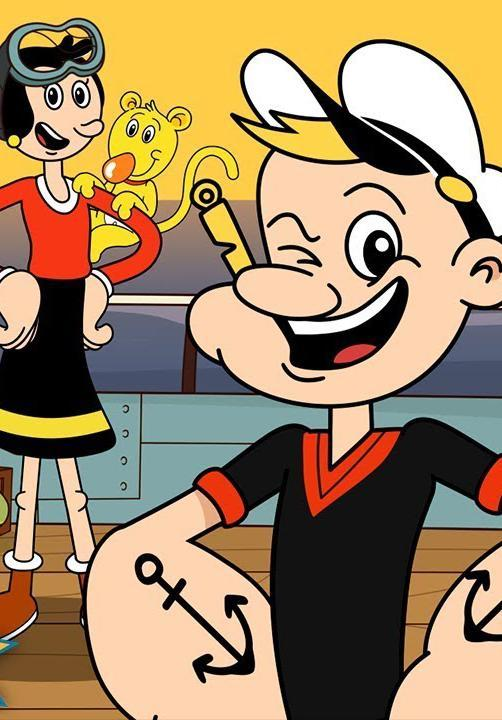 Linus without his blanket. I rest my case…

Anyway, all grievances aside, this gets back to the point of how important the specific pipe is to many pipe smoking characters.

There's nothing more simple and down to earth than a Corn Cob pipe. And that’s really what Popeye is about—he’s not polished and refined, he’s grounded and principled. 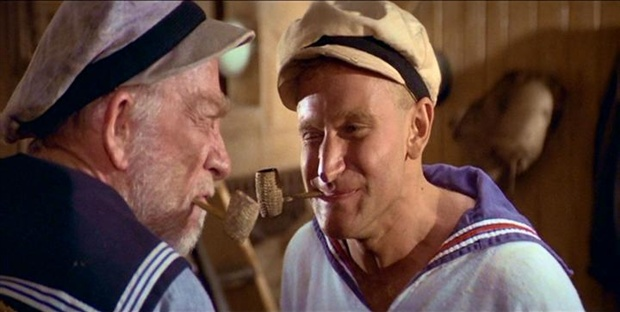 Williams truly brings that to life in the 1980 musical, and it wasn’t always easy. Some of his lines are actually voiceovers he had to punch in later.

Apparently the challenge of imitating the pinched, raspy mumble of Popeye’s voice with a pipe between his lips resulted in some pretty unintelligible lines. But we just can’t have Popeye without it.

(The silicone forearms, however, I wouldn’t mind relegating exclusively to the toon Popeye...those kind of freak me out.) 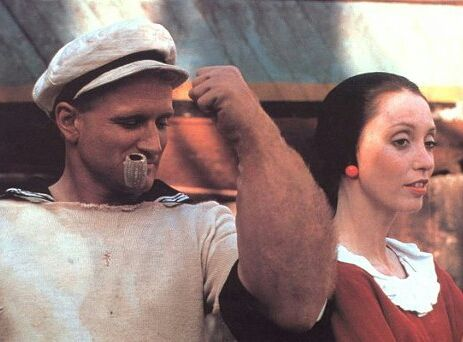 Here are some of our favorite Corn Cob pipes on our shelves: 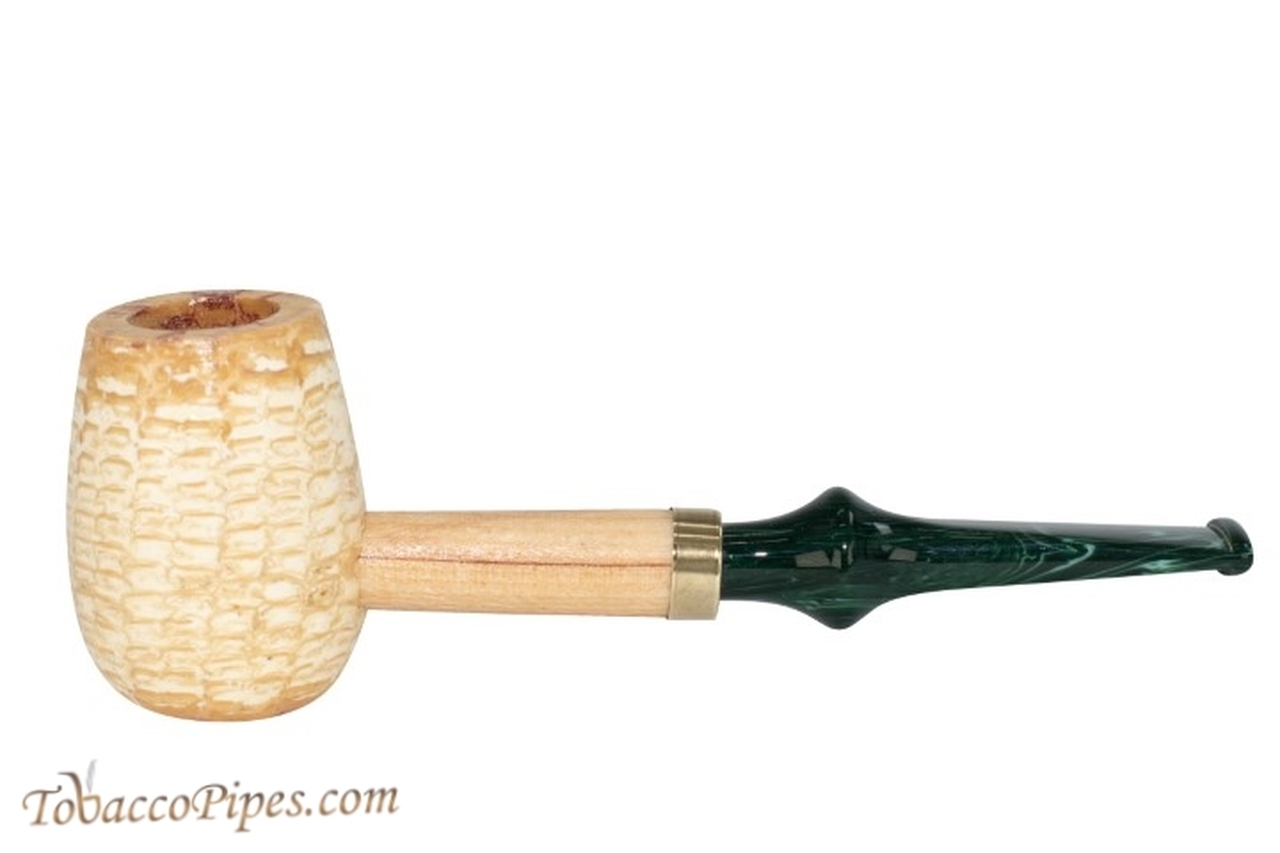 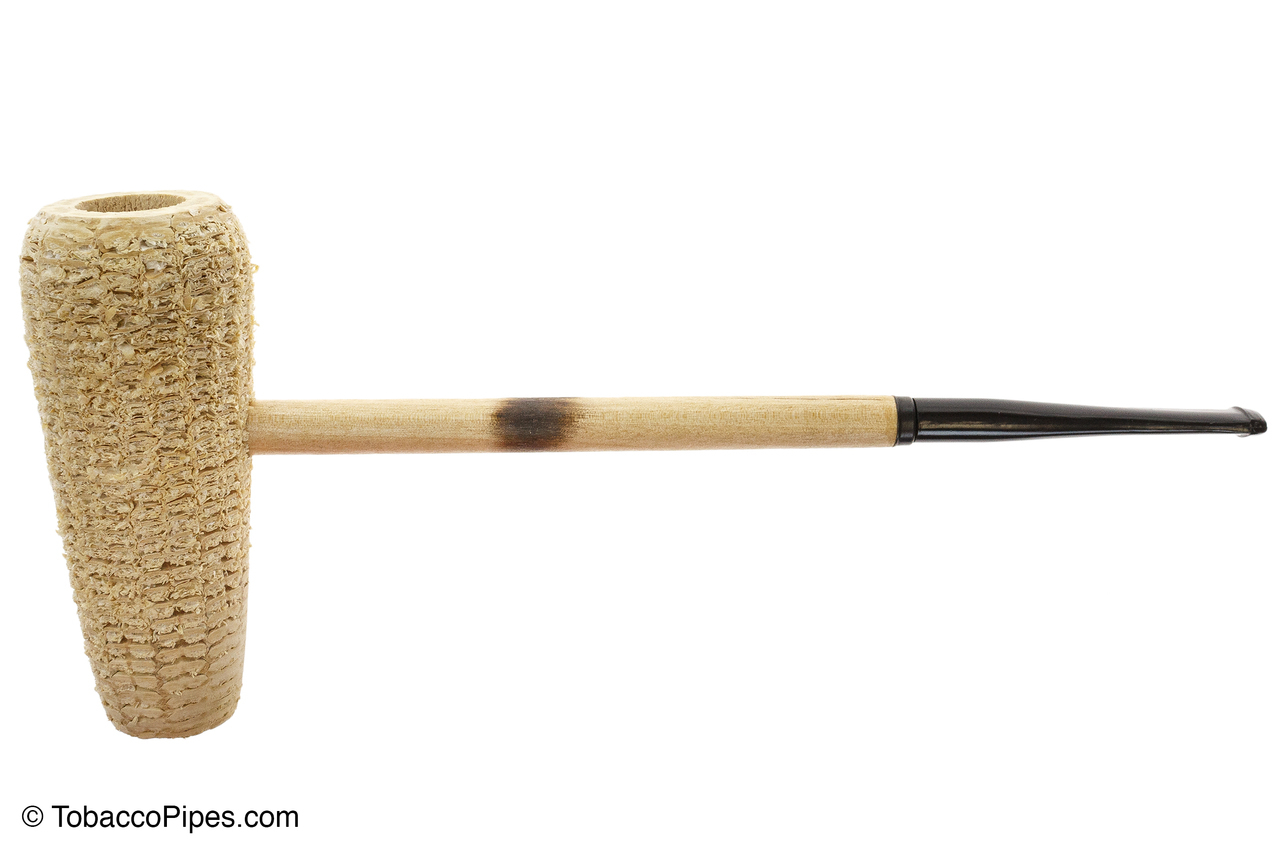 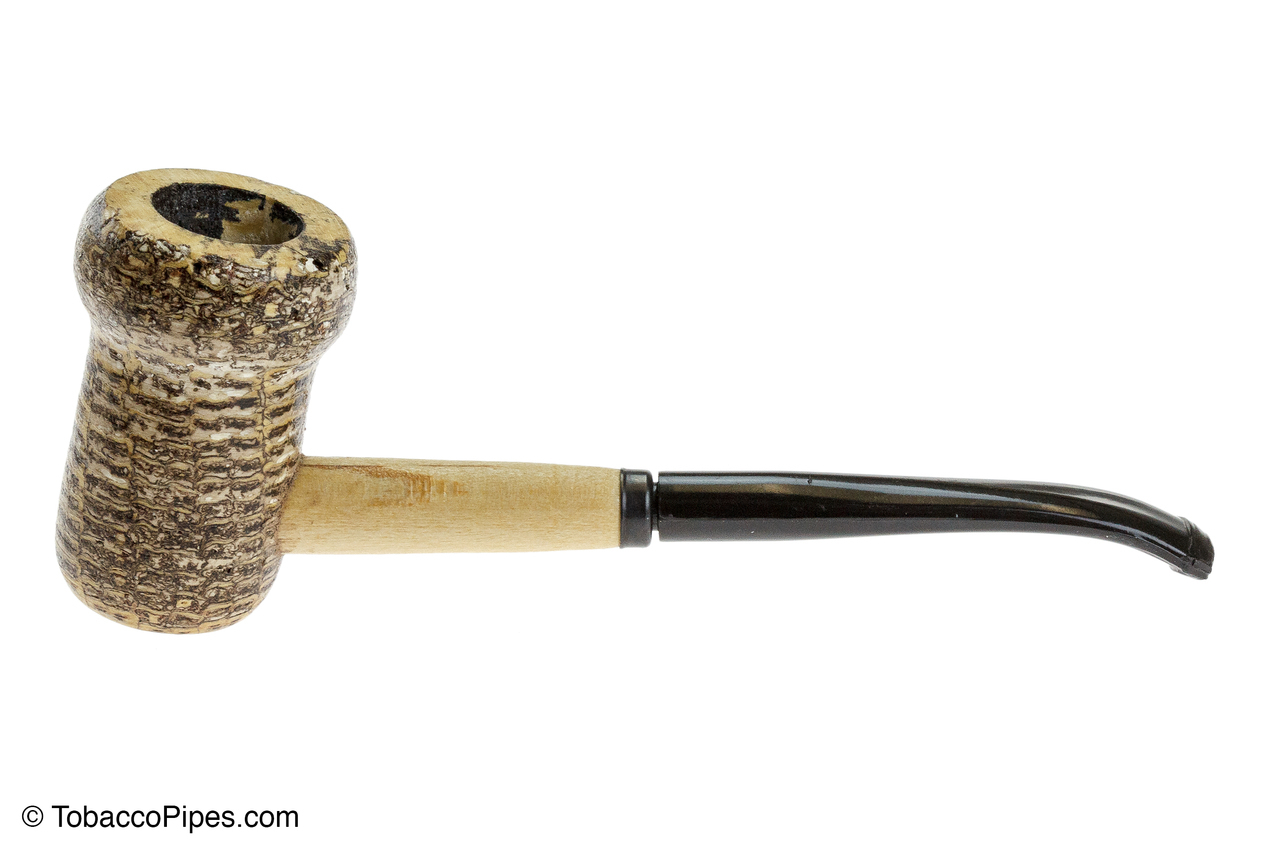 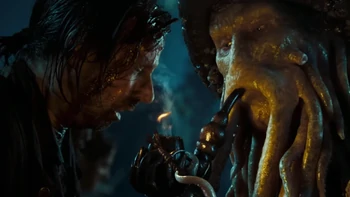 While we’re on the subject of things that freak me out...

Here’s a pipe smoking character whose pipe is absolutely unforgettable.

Introduced in the second Pirates of the Caribbean movie, Dead Man’s Chest, Davy Jones was a man (or uh...squid crab man?) with quite a taste for the extravagant, especially when it came to pipes. 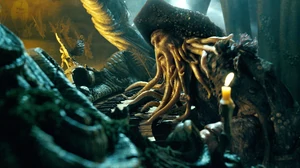 And I’m not just talking about his monstrous, nautically gothic pipe-organ he played with his tentacle beard (but yeah, I guess I would call that eccentric too).

The mythos surrounding Jones’s pipe is as fascinating as it is fitting of the character. 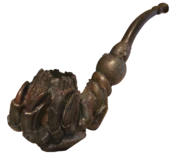 We’re told that the pipe was carved from whale bone, with a shank and mouthpiece made from silver that was mined from the ocean floor. 10 talon-like crab legs eerily cradle the bowl, holding it aloft like Yorick's skull in Hamlet’s palm.

If this all wasn’t bizarre enough, Jones fills this pipe with some otherworldly mixture that allows him to smoke underwater—quite the convenience for a pirate whose ship is often submerged, and who is, well, eternally wet.

All things considered, Davy Jones is almost as unsettling as Popeye’s silicone arms...almost.

Now, we don't carry this pipe and don’t carry any tobacco that renders an ember inextinguishable, but for those who value truly out-there oddities, we can help you out. Here are some pipes from our One of a Kind selection that are perfect for anyone drawn to the bizarre. 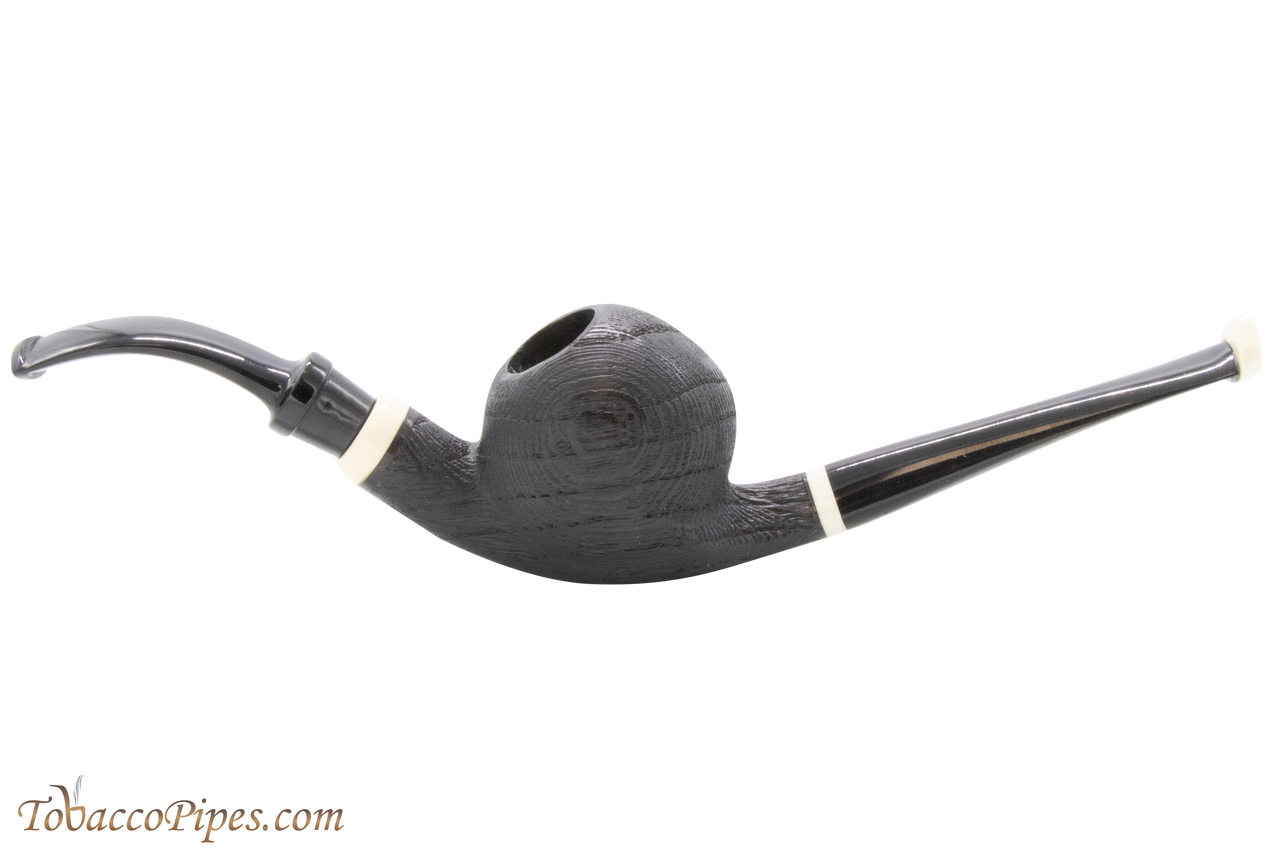 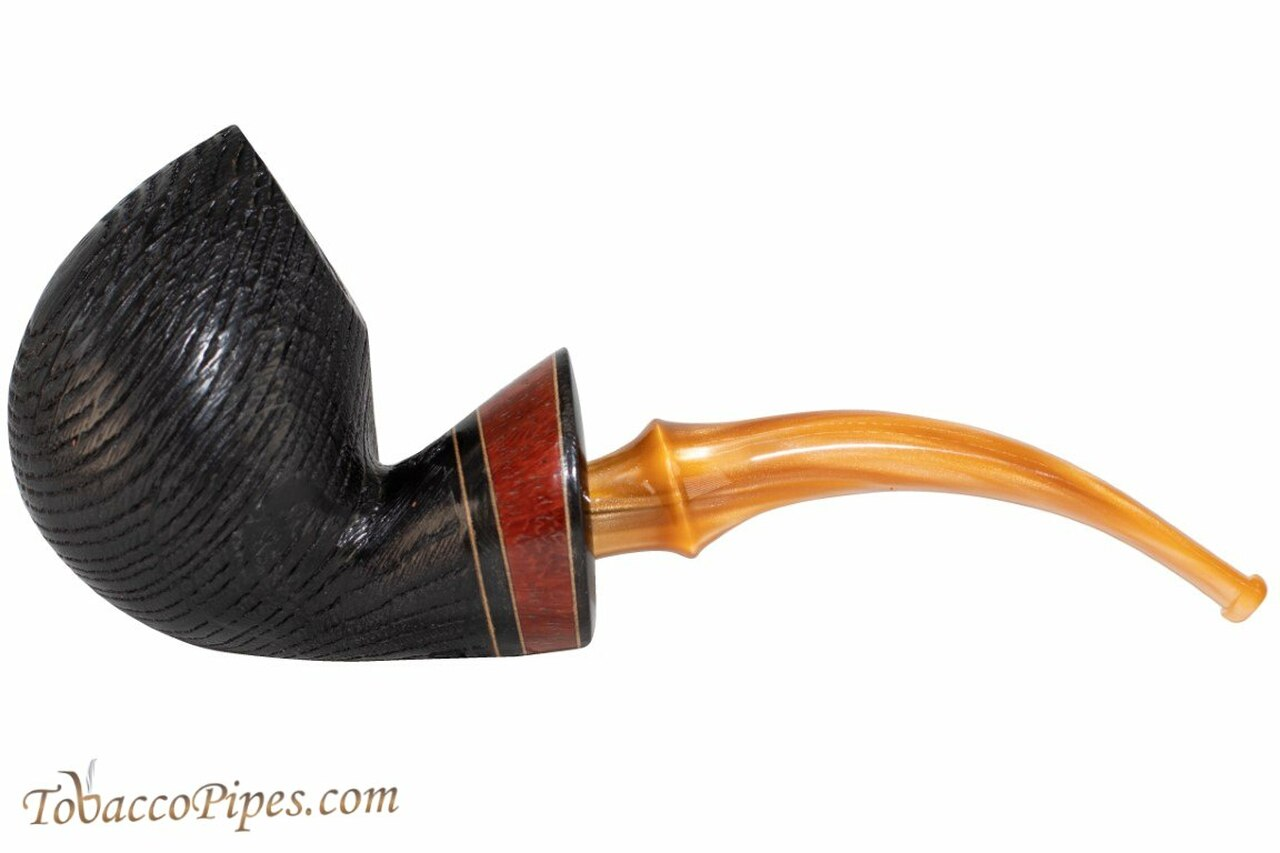 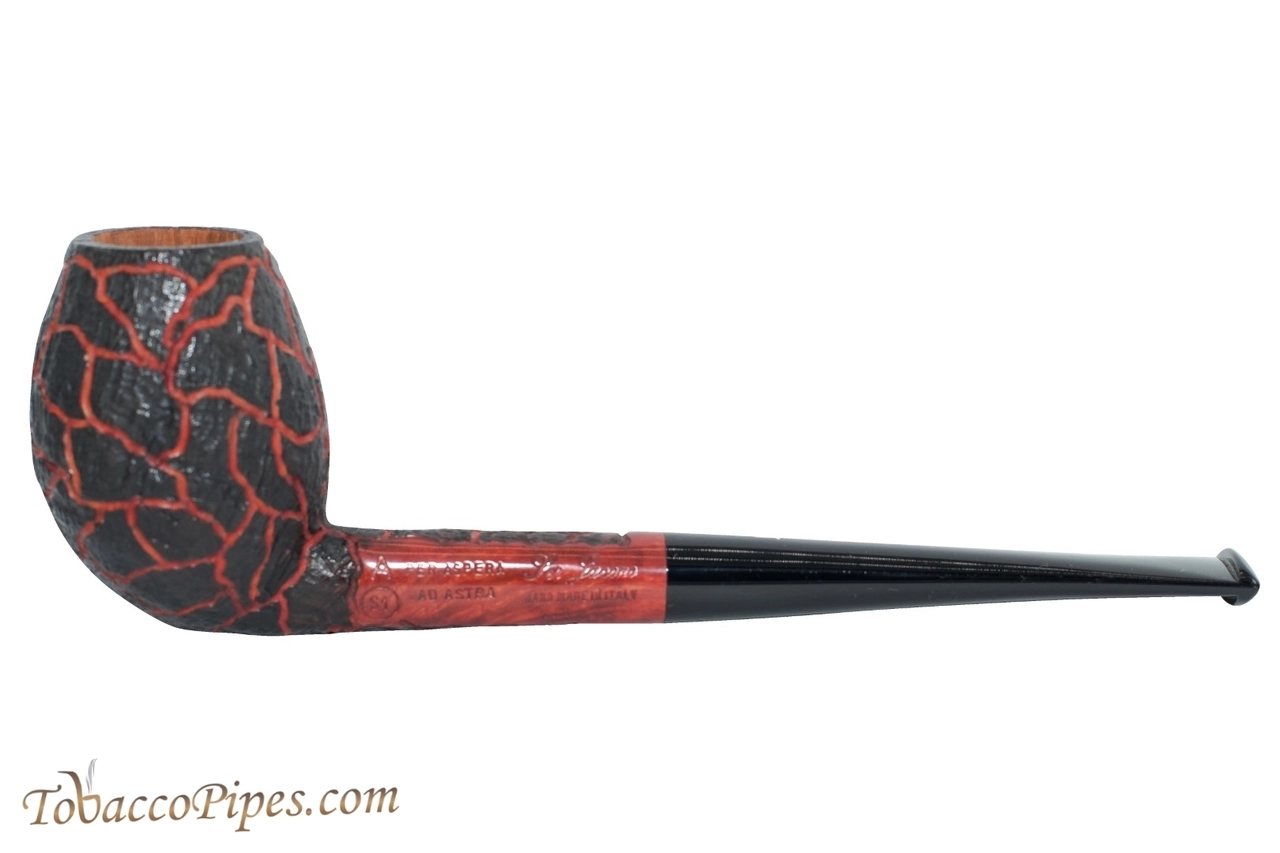 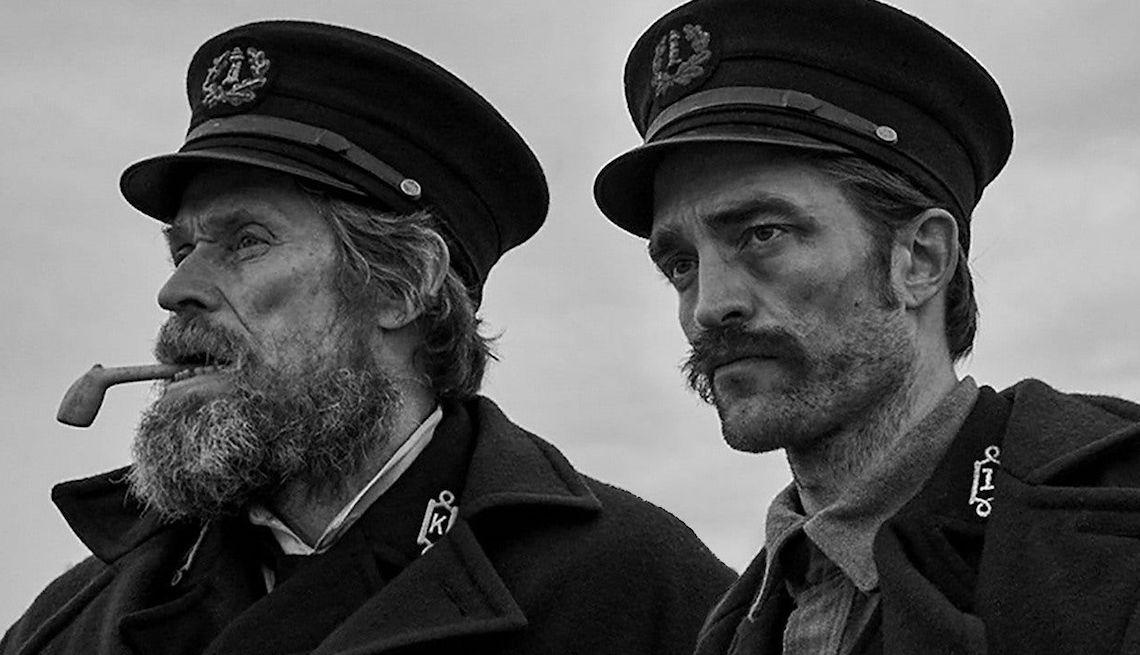 Clearly, our maritime men love their pipes. Thomas Wake, who is expertly portrayed by Willem Dafoe in the 2019 hit The Lighthouse, is more in the Popeye camp of the no frills pipe smoking character. Not a supernatural captain with a taste for the extravagant, but a lighthouse keeper just trying to keep an ember lit through the wind and mist.

This pipe, I really love. You can usually expect to see the salt-of-the-earth pipe smoker with a Corn Cob or a simplistic, rusticated Billiard. But this little clay cutty pipe smoked upside down and jutting from Wake’s whiskers like a tusk, is the perfect accent to the scowling man. It seems as natural to the character as the craggy rocks do to the ominous setting of The Lighthouse, outthrust against the onslaught of the maddening tide. 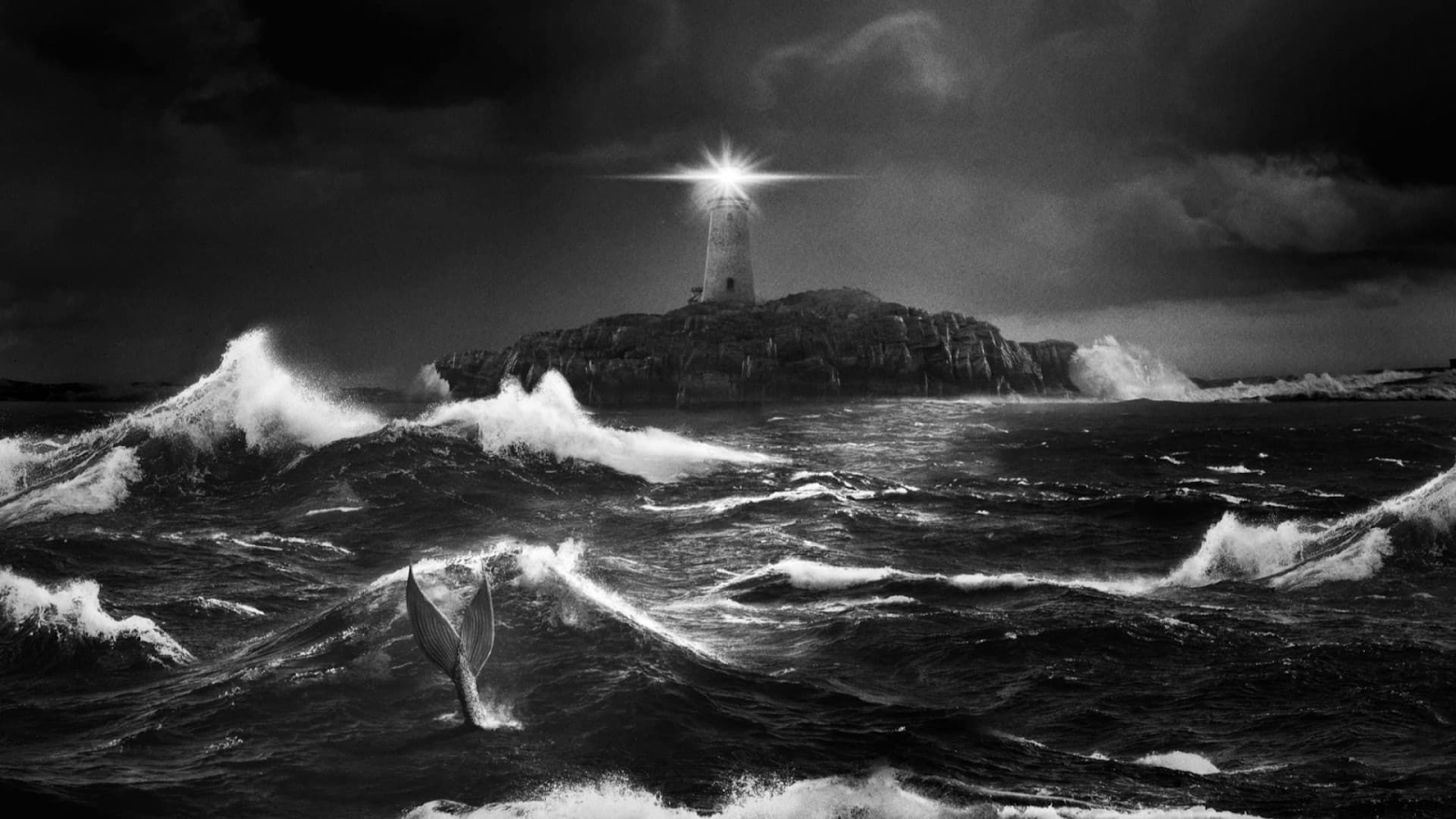 In playing this pipe smoking character, you have to hand it to Dafoe for the commitment.

So often, tobacco pipes in movies are little more than a prop. But I can understand that, in the real world, we’re not so stifled by the finicky realities that may impede the flow of a scene.

Even simple routines are a carefully choreographed dance when the camera’s rolling. None-the-less, Dafoe learned his steps well:

"You’ve got to go over to a potbelly stove, open it up, get a cinder during your speech, light your pipe, and it’s got to be tapped the right way. Otherwise, it won’t light well. You don’t want to be sucking on that pipe all through the speech. You’ve got to have it lit by a certain time and then you’ve got to smoke it. It sounds simple enough, but that’s the stuff that’s challenging." 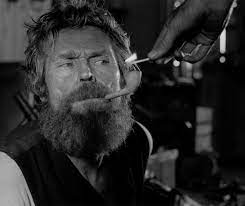 Even if your taste is a bit fancier, clay pipes are still great as affordable options for the right situation. Like the tennis-shoes you wear to mow the lawn, some situations call for a pipe that you’re not so worried about keeping pristine.

I love these pipes for a quick pack, when you just want a brief 10 minute smoke—or as a neutral taste-tester for new tobaccos.

Here are some of our favorites: 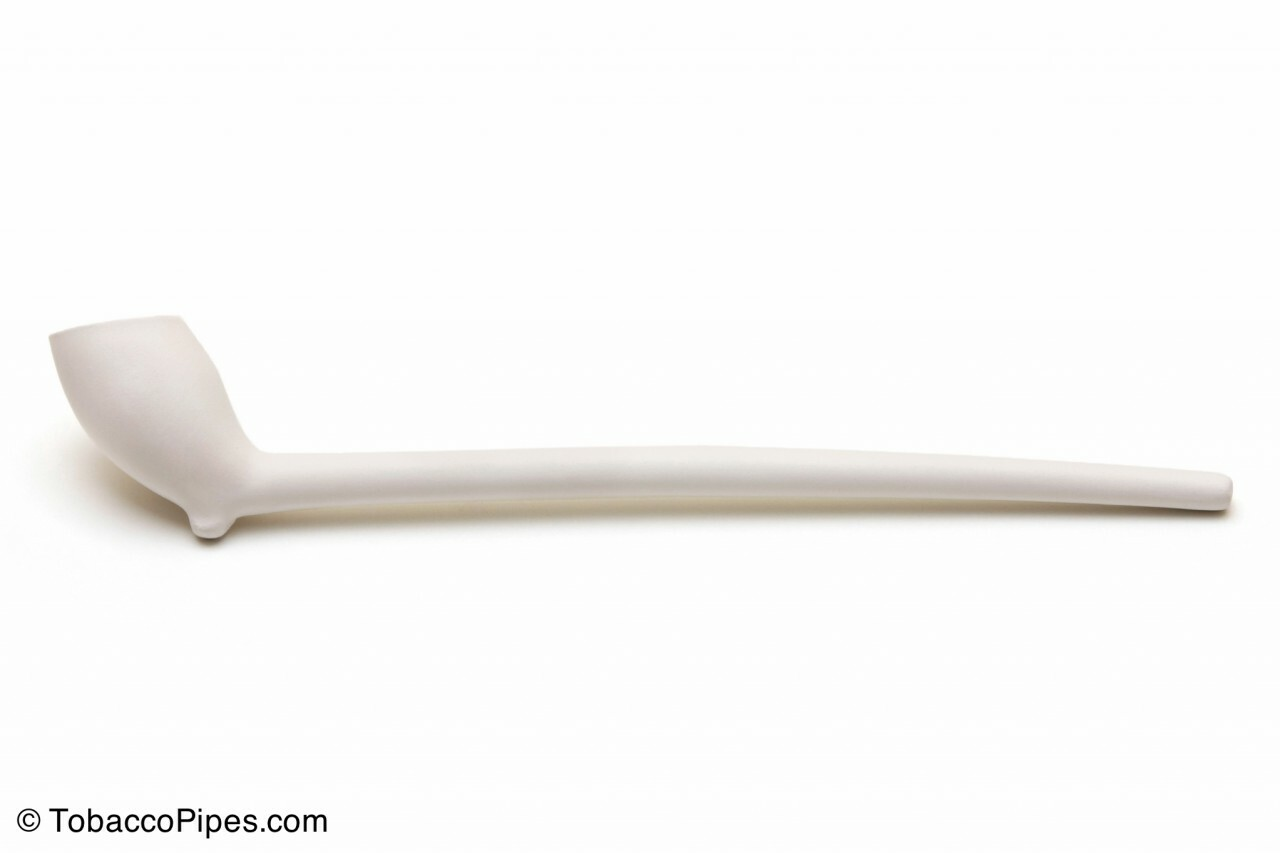 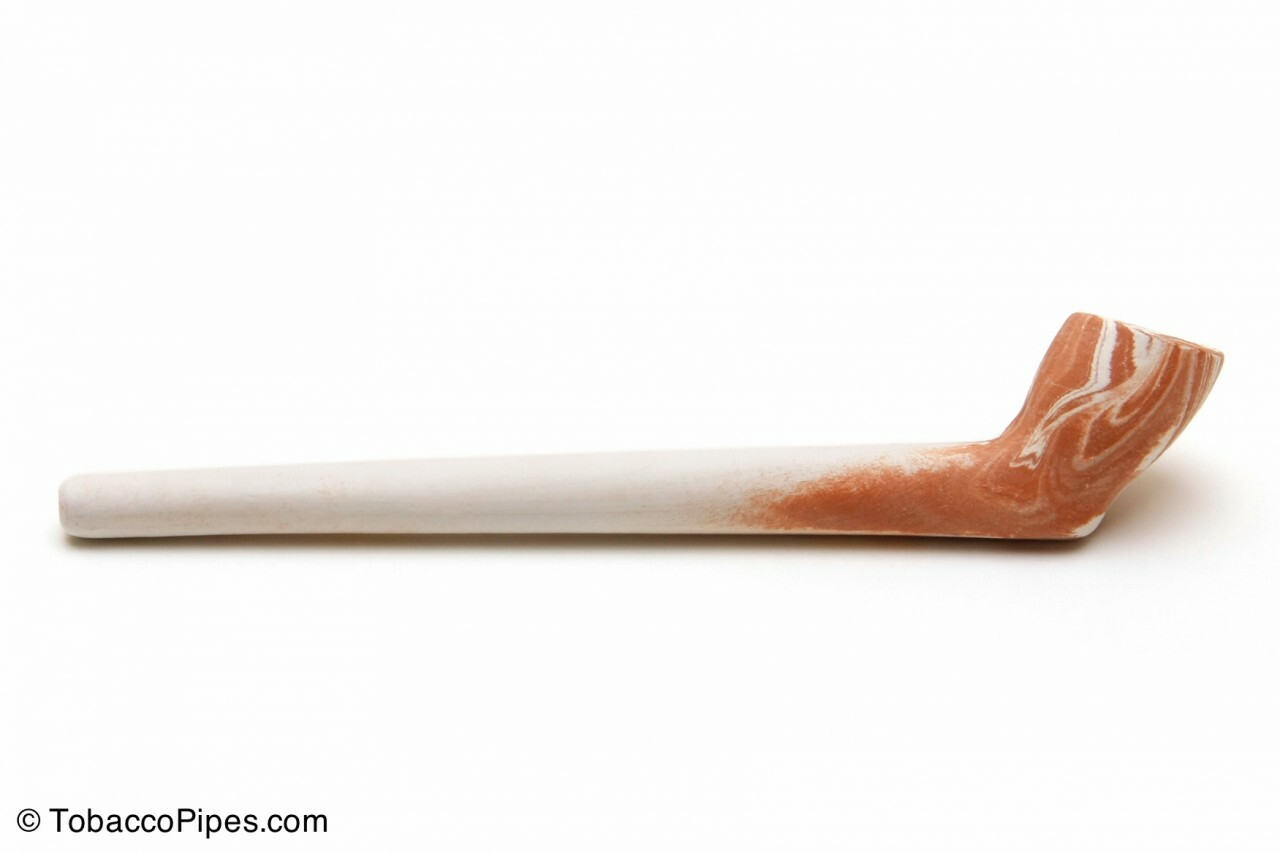 If there’s anything these pipe smoking characters can show us, it’s how much a pipe can complement your style and personality, and reflect yourself as a pipe smoker.

Maybe enjoying a smoke from your pipe helps clear your head to get the gears turning, maybe it slows them down for a moment of peace. Or maybe you just don’t think about it that hard—you like to puff a pipe, you just do. As Popeye would say, “I yam what I yam.”

Maybe you're a squid crab man and just can’t seem to own one normal thing that doesn’t look like it was won off of Poseidon in some mythologized battle of wits.

Whatever it might be, browse our diverse selection of pipes and find the style that resonates with you.