This is one of those rare Tobacco Files where I’m actually revisiting a blend and not having something for the first time. I got a tin of Pegasus some months back and smoked a bit of it, jarring the rest.

Also, after last column's omission, we will have the return of the Featured Cigar segment, and I'll give some notes on a premium cigar I recently enjoyed. 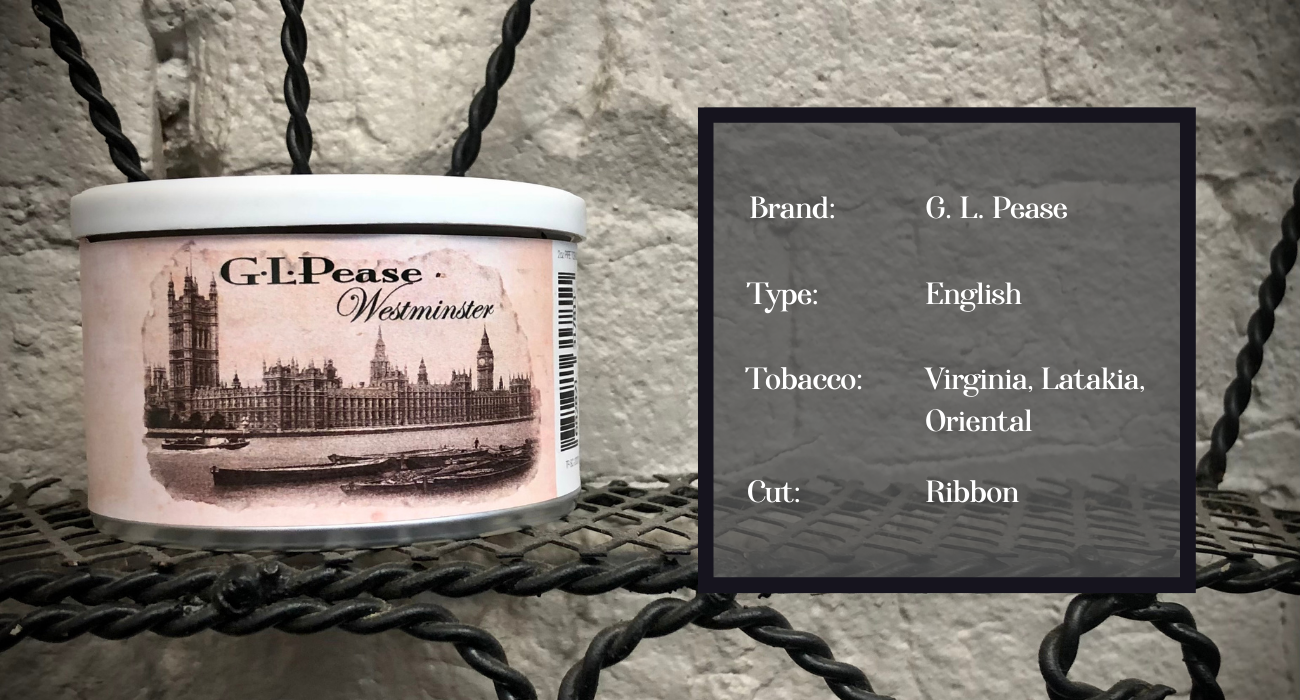 So oddly enough, this is the first G. L. Pease English blend I’ve smoked. Never have I been disappointed with a Pease mixture so it was about time. Blended to be a quintessential English blend in homage to the original Dunhill London Mixture, pre-Murray's production, Westminster is now a classic in its own right, so where better to start?

Popping the tin, I’m immediately hit with that earthy, smoky Latakia. It reminds me of Balkan Supreme or Sutliff’s Sobranie Match. I know Westminster is sometimes referred to as a Balkan, so perhaps it lives in that gray area.

The pungency of Latakia in a tin note can easily belie the nuance of a complex, dynamic blend, so while I’m anticipating a Lat-bomb, I’m cognizant that the eyes and nose have deceived me before. 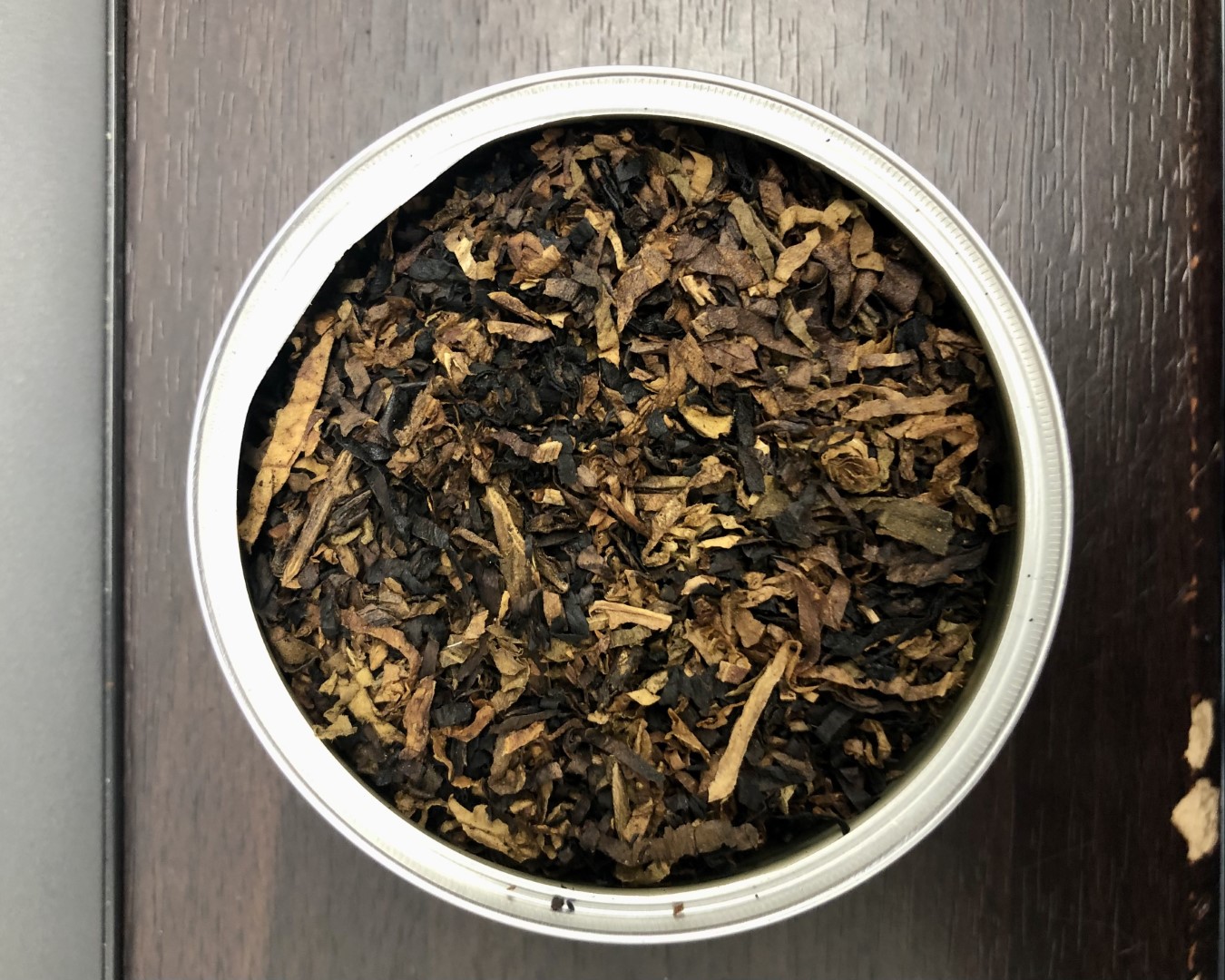 The ribbons run the spectrum of brown from a light tan to almost black Latakia, of which there seems to be a healthy portion. The moisture content is smoke ready, but anticipating that it could need some drying, I opened the tin amid finishing up some other tasks, so I go ahead and put a pinch aside to air out for about half an hour.

I pack up my trusty Longchamp and have my first smoke of Westminster.

An immediate leathery, smoky Latakia sensation surfaces from the first puff—very apt in my leather-bound pipe. However, you don’t really have to wait for the Latakia smoke to clear to notice the herbal and spice from the Orientals.

Surprisingly buttery. The retrohale offers a little more of the concentrated earthiness and spice but it’s mellow and refined, not rough. 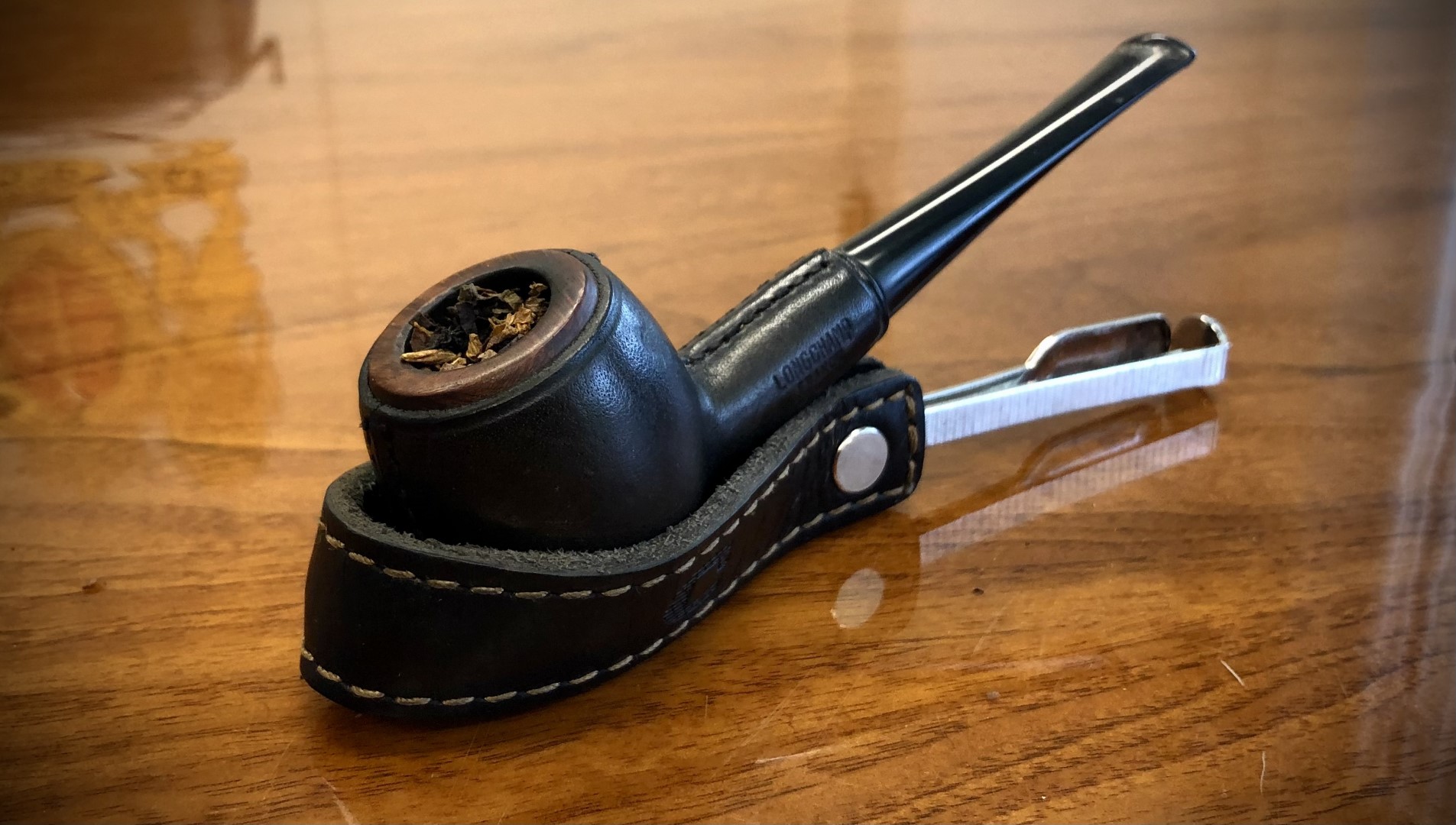 As the profile opens up a bit, the Virginias make their presence known with stewed fruit and fig contrasting and rounding out the edges of the tart and somewhat bitter Oriental notes and adding depth to the Latakia. I notice the buttery-ness every so often but it’s become less constant.

Although the Latakia is focused, it isn’t the Lat-comb I was half-expecting, and with the significant Oriental herbal quality, I can see why one could feel Balkan is a fitting category. But the red Virginia brings a lot to the profile—a rich, flavorful blend with components that each have their role, playing off one another but not colliding.

That said, I think a few smokes will go a long way in getting a sense of the full presence of the components.

As I’ve continued to smoke Westminster, there’s been more consistency throughout each smoke. I assume that’s just my getting better acquainted. Right from the char it seems to give an honest bouquet of the components. I feel that even with more complex blends, I expect that first draw to be a smack from whatever the dominant flavor might be before the rest comes into view, but Westminster is a full blend of complimentary flavors.

It’s smooth, leathery, woodsy right to the end. Smooth through the retrohale where you really get a concentration of the musky, earthy side of the profile. But the red Virginia dark fruit and bread are consistent and I get some bright grassy notes adding more dimension.

The wisdom you’ll often hear is that complex blends are most appreciable in a wider bowl, which is often the case to me, but oddly enough, I think my favorite smoke of Westminster has been in my J Mouton Poker which has a deep, narrow chamber. But hey, maybe it’s just the stars aligning for that smoke.

One thing I’ve picked up on is that, for me, I get much more out of Westminster with a beverage. It has that tannic nature that can coat the mouth a bit, so sipping water helps keep the profile alive, but I’ve also been loving it with my coffee—the real test of a Latakia blend for me.

Or hey, beer works too. 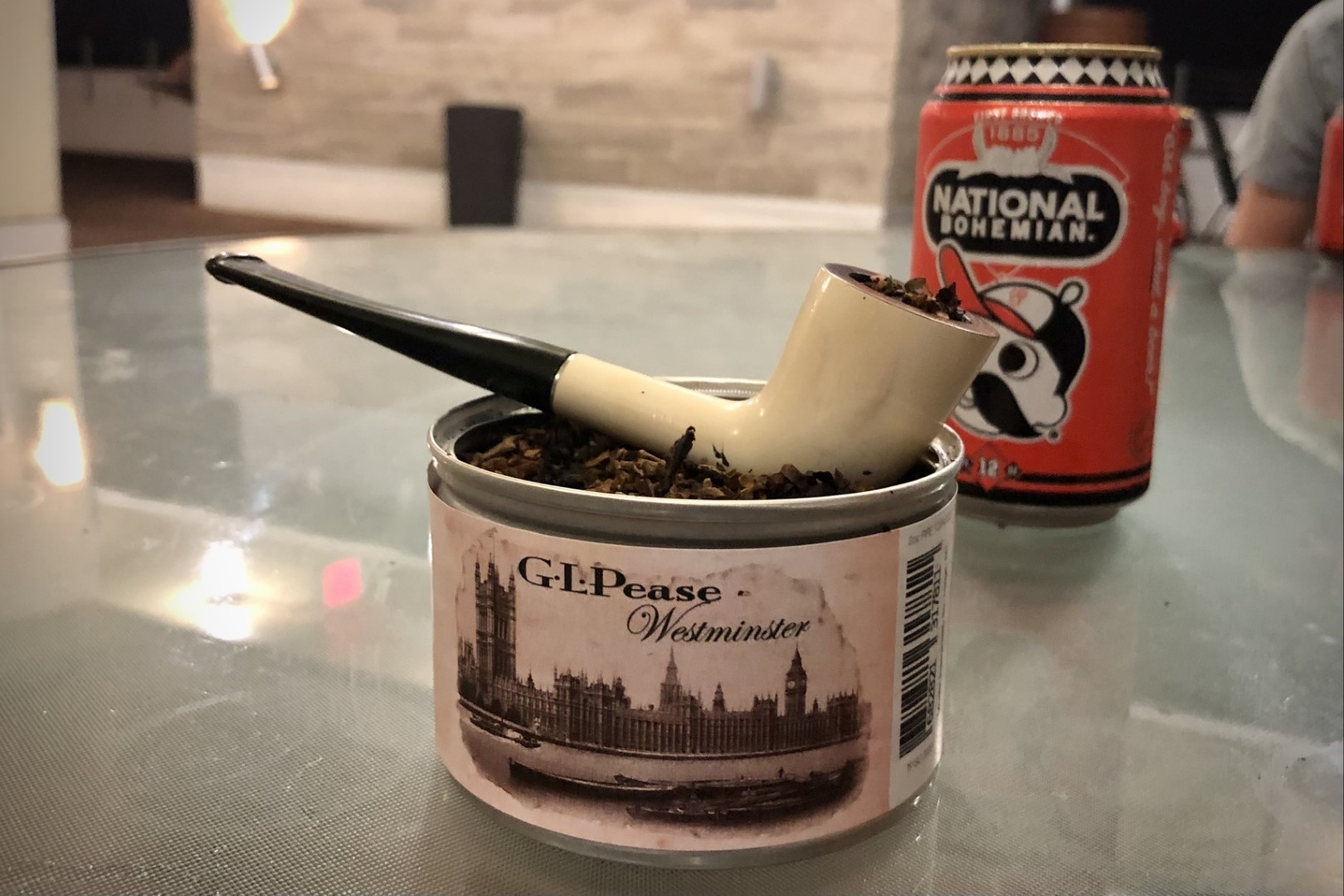 Just some Natty Boys enjoying their Natty Bohs and a rich English blend, taking advantage of the nighttime coolness. And by coolness, I mean barely less of a scorcher, but we’re takin’ what we can get right now.

My final thought on Westminster—it’s a flavorful, rich English, and every component plays a role in making that so. Certainly leaves me with the urge to delve into more Pease English blends.

Also, a lot of folks recommend aging this one, even for half a year or so, so I think I’ll add some to the cellar and see how it develops. 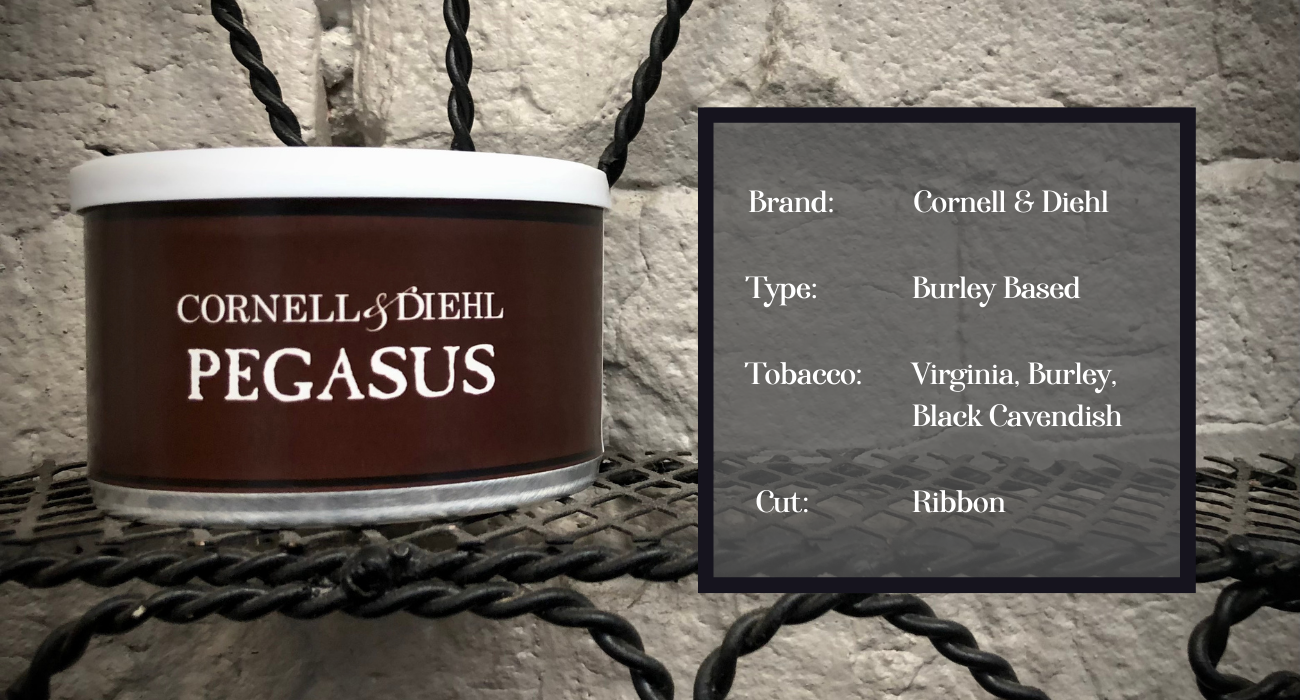 As I wrote earlier, this won’t be my first time smoking Pegasus, but I can’t recall my impression too well. I had a few smokes and sealed the remainder in a Bell jar. Luckily I had kept the tin so I could still take my “blend info” picture. I got it at the same time as Kajun Kake, also blended by Bob Runowski, and that VaPer stole my attention. Which I assure you says a lot more about my love for Kajun Kake than any sourness toward Pegasus. In fact, I chose it for this Tobacco File because I heard its praises sung elsewhere—I believe a YTPC video—and decided I ought to return to Pegasus for a fair shake.

Though I don’t recall my impression, I found that I did take a few notes while smoking it back in April.

It’s on the bready side. Nutty. It has feeling but subtle flavor if that makes sense. An earthy base with a Virginia sweet grassy note. Woodiness in the sinus.

I’m interested to see what I get out of it this time around. It’s only been sealed for three months, but still, I’ve become more intrigued by Burley in that short time.

The tin note is earthy and cocoa, with a subtle tartness and grass when you sit with it for a few moments.

Pegasus is dry and ready to smoke, although, this isn’t right out of the tin. 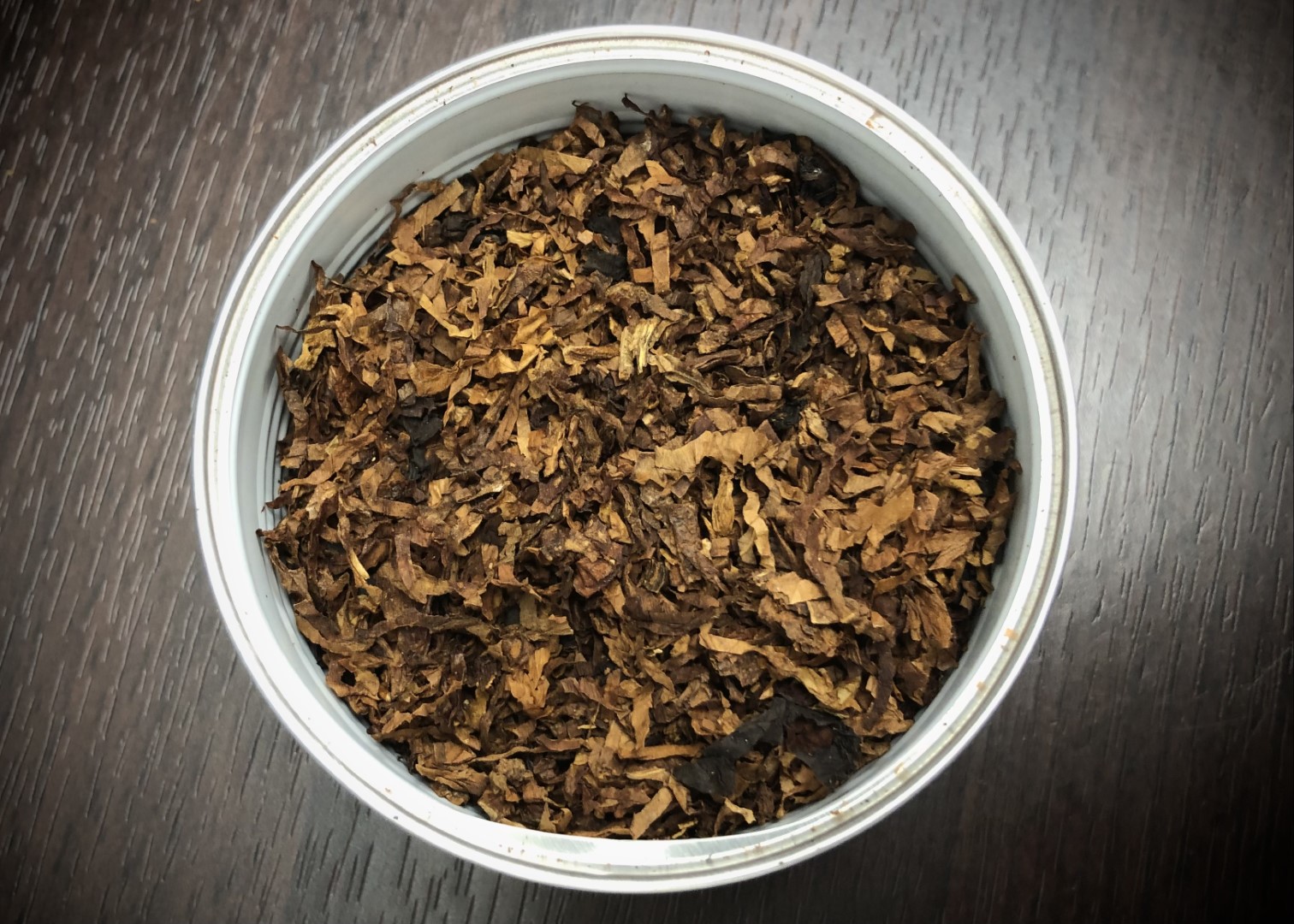 Dried fruit and tart Virginia flavors come up with the char.

As I get into the smoke, I pick up earthy, nutty Burley as a foundation to the Virginia notes, from which I’m also getting the grassy, hay side of Virginias—to me, the perfect compliment to Burley. Very natural, unidealistic in the best way. The Burley flavor isn’t very pronounced, but its presence is felt in the body and strength, and gives a tingle in the sinus.

The nic-hit seems to rise to medium about halfway down the bowl.

I didn’t think I would be smoking a Virginia for this column, and “Burley based” certainly doesn’t seem like a misnomer for Pegasus, but the flavor speaks to my love of Virginias but with these bready, woodsy, oat-y undertones.

I imagine the unsweetened Cavendish is working to disperse these flavors as well. It’s certainly a blend that, while subtle in flavor, is nicely spread about the palate.

As I’ve continued smoking Pegasus, I’m noticing a lot more of the Burley flavor. Whereas my initial few smokes seemed more defined by Virginia flavor with Burley’s contributions in body and strength. I do still get a Virginia forward profile, perhaps because my frequent Virginia indulgence has my palate particularly susceptible to those tastes, but it’s dominant, not dominating, and the Burley has much more say than I first noticed.

In checking out some reviews of Pegasus (something I’ll generally do with these blends after I’ve smoked a few times without any assumptions) I was delighted to see that there was one review from the blender himself, Bob Runowski, posted in 2001. 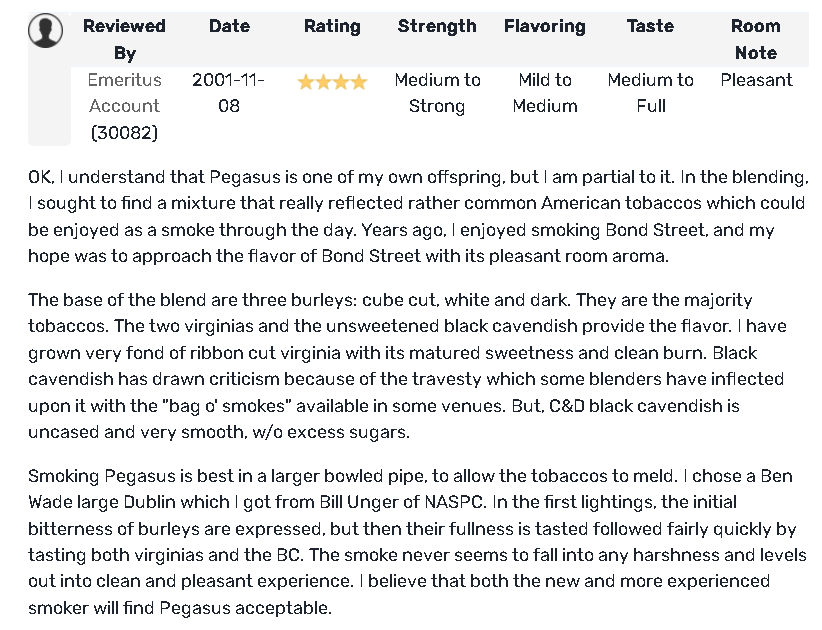 On his advice, I packed Pegasus into my Molina Tromba—one of my larger bowls—and lit up. 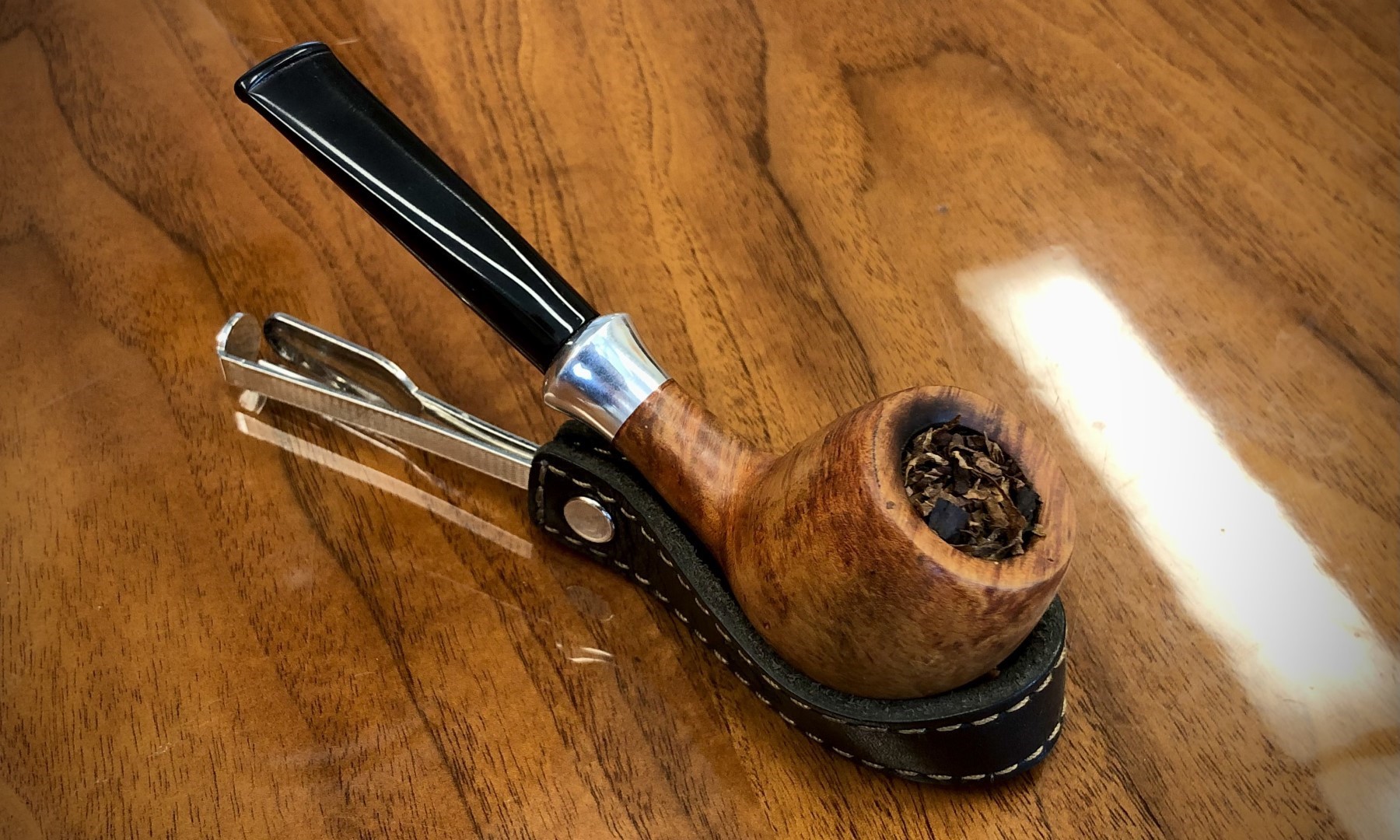 I could see myself smoking this often, of course for the great taste, but I’m always wrestling with the desire to further open my palate to the nuance and subtle rewards of Burley. Sometimes I’m receptive, sometimes not. In this regard, Pegasus delivers.

So I didn’t quite get around to a cigar last Tobacco File but I had a few the last couple weeks and the stand out was phenomenal, the E.P. Carrillo Pledge Prequel Robusto. It should come as no surprise, seeing as though it scored 98 points from Cigar Aficionado, taking home their #1 Cigar of the Year in 2020.

For now I think I’m going to stick with the format of the last Featured Cigar segment—essentially just my smoking notes. 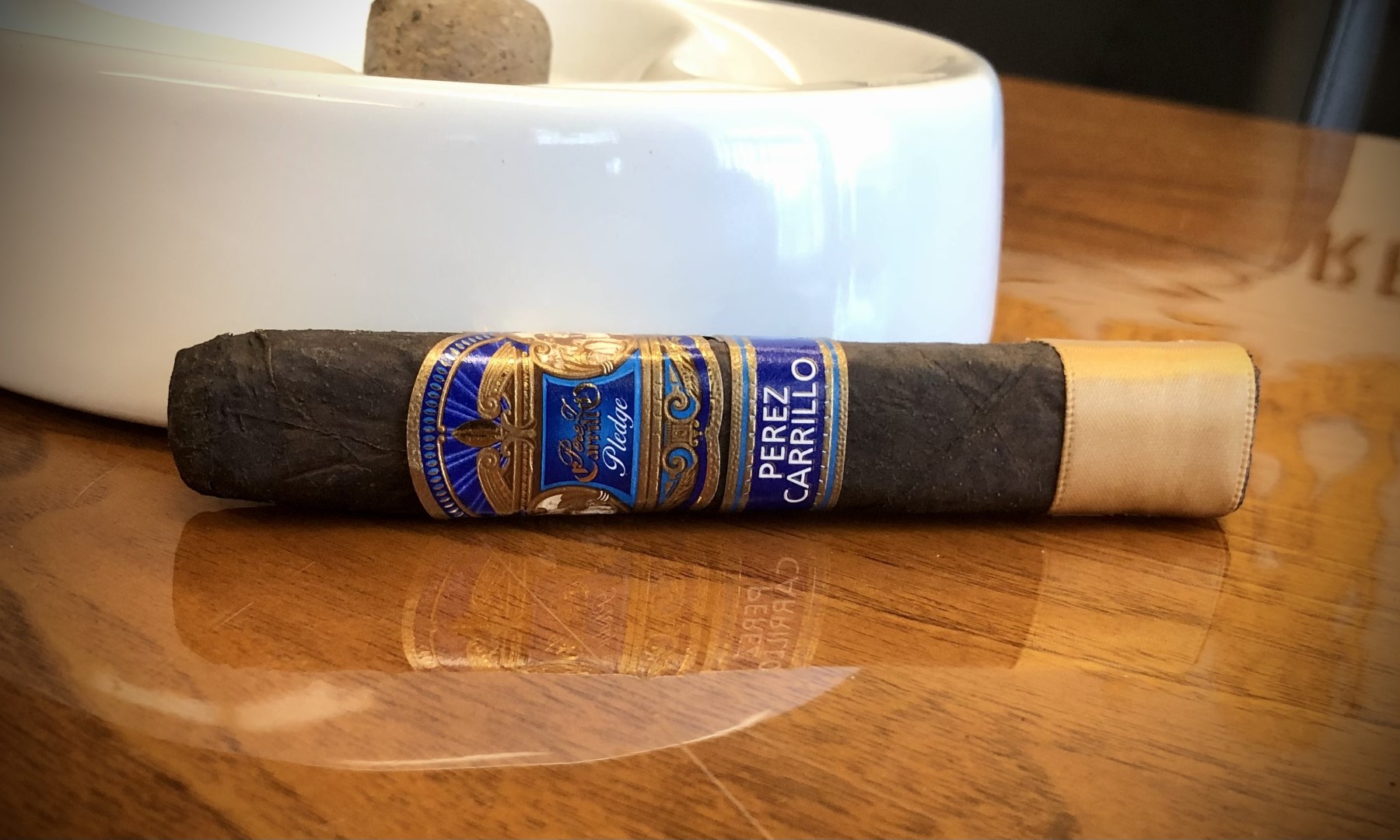 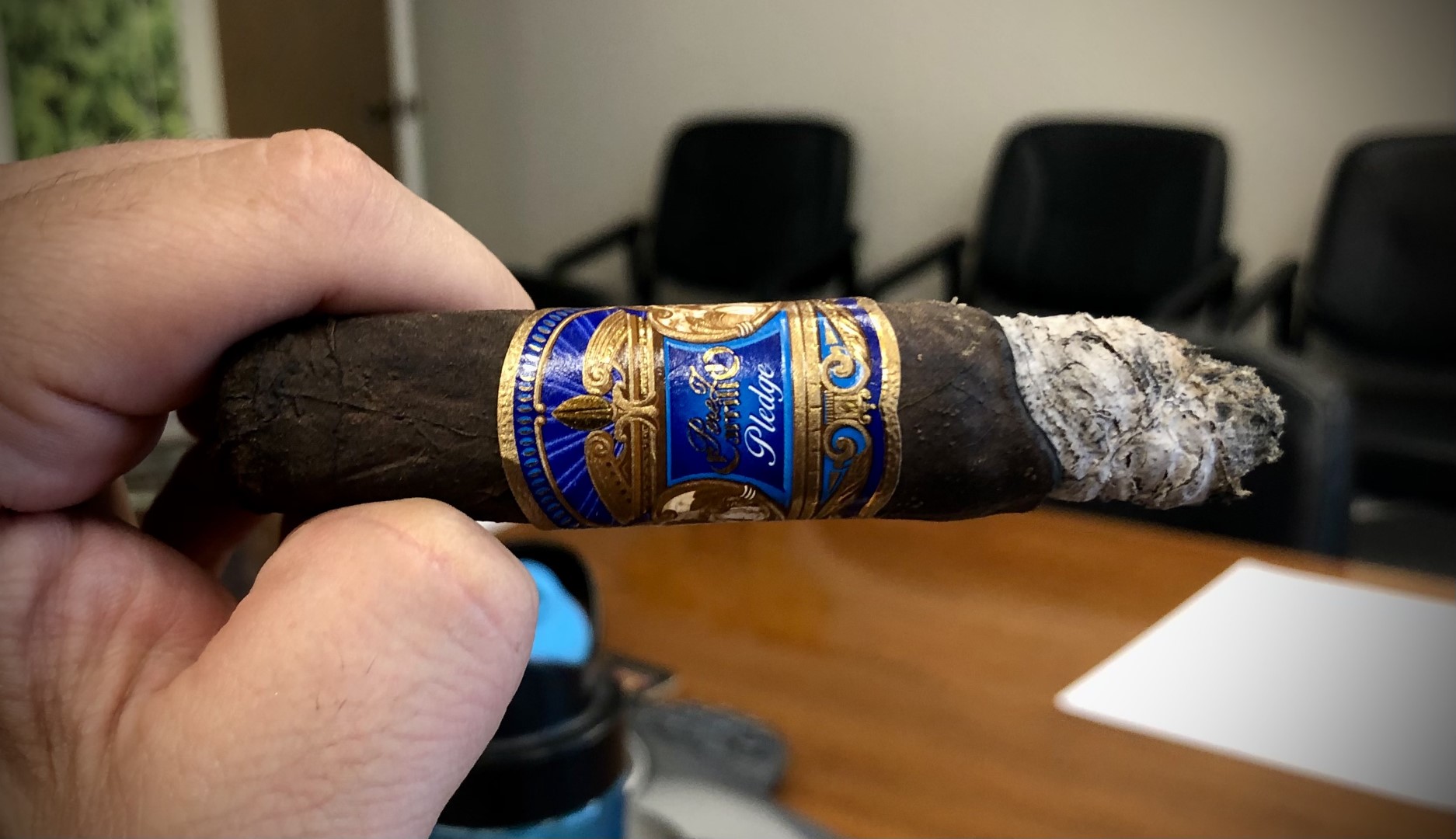 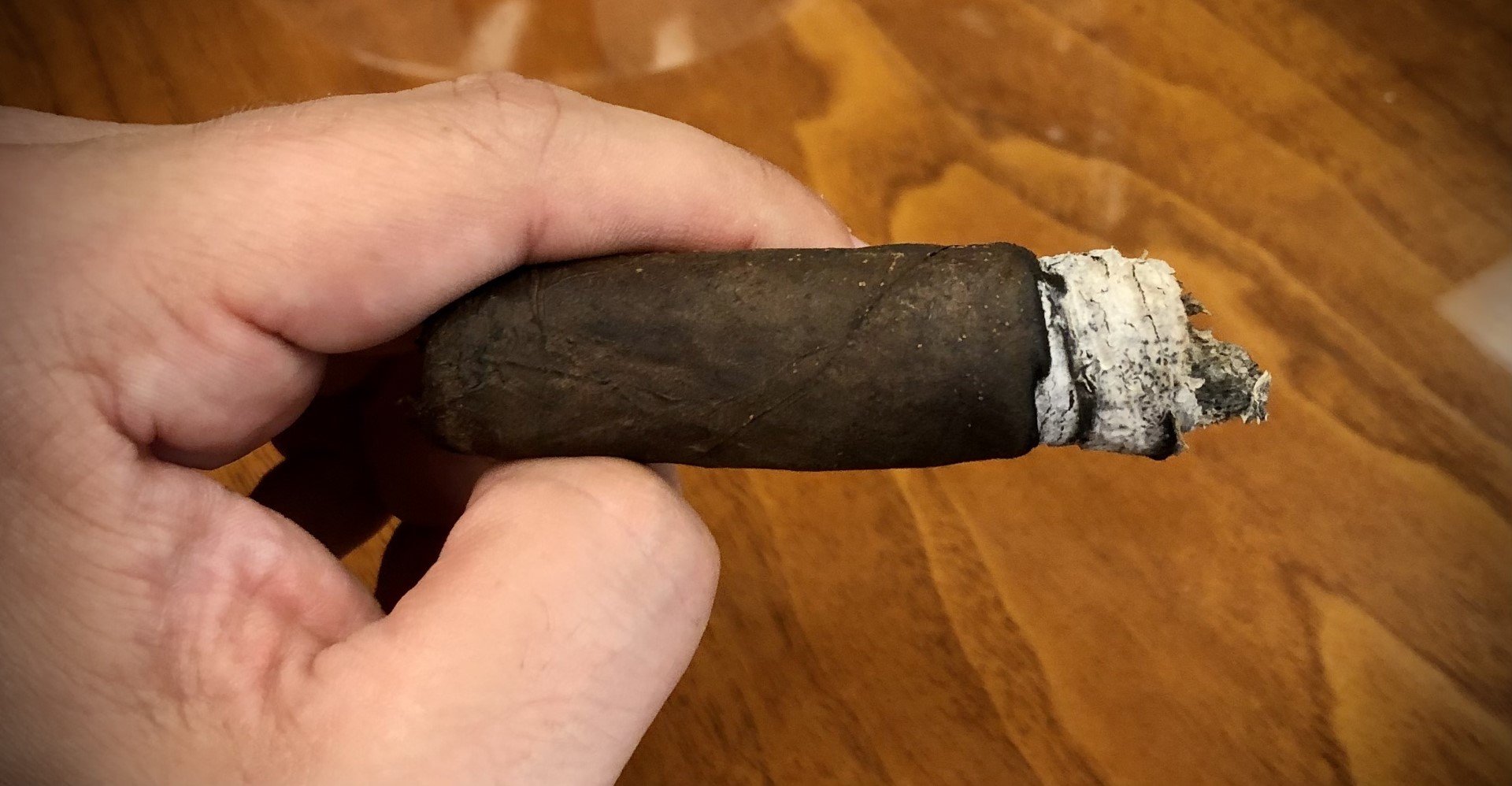 I’ll see you in two weeks with another two blends (only chosen one so far so if you have any suggestions send em’ my way!) I'm especially excited for next week because I’ve got a pretty new meerschaum pipe begging to be smoked.