There's been a lot going on the last couple weeks that's allowed me the opportunity to try some exciting blends. I'm still very much enjoying the recently released Uno which I wrote about for the last Tobacco File, and I've recently gotten to dig into the newest Joe Lankford offering from Seattle Pipe Club, Hogshead.

Additionally, the bosses and I decided it would be fun to keep me in the dark about the TobaccoPipes Compare & Share Mystery Blends so that I could join the fun in discussing those. Among all this exciting stuff, I was a bit concerned I'd have a hard time bringing myself to frequent the Tobacco File blends, but such worries were quickly dashed. Each of these mixtures grew on me quickly and I was more than happy to keep packing them up.

For this column, I've returned to Captain Earle's for a bold Oriental mixture, and ventured into my first Davidoff blend for some curly cut VaPers. 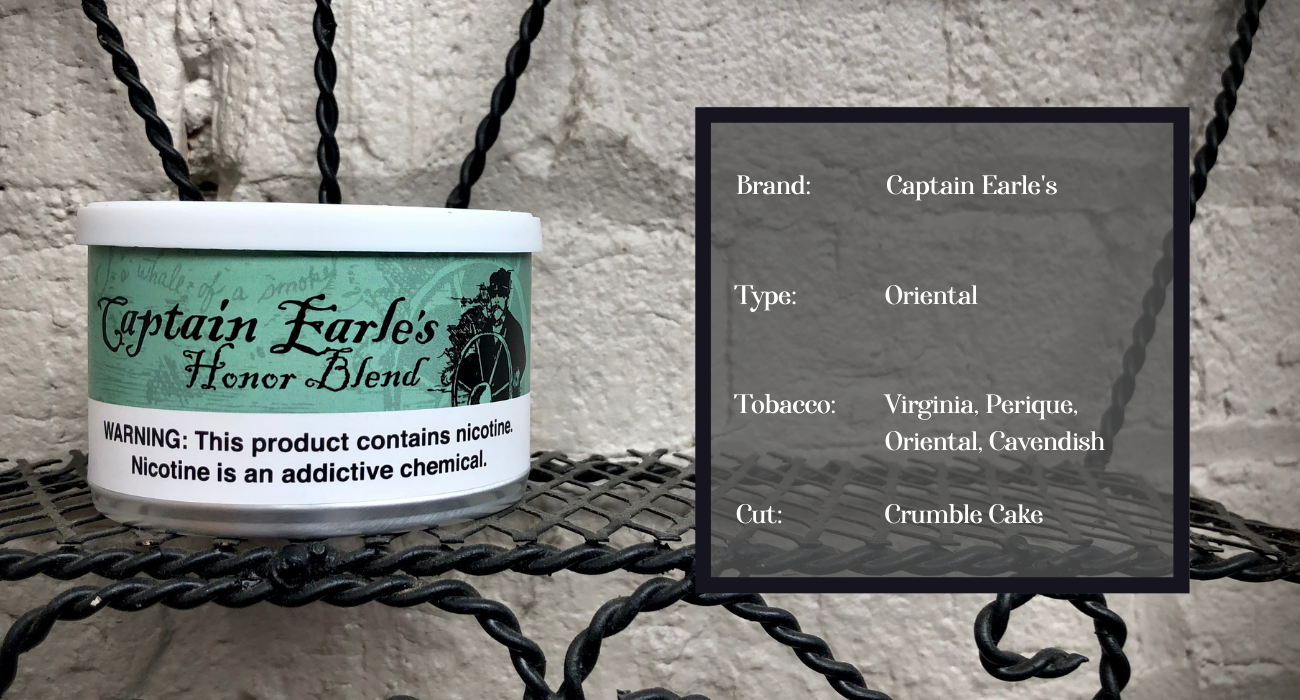 This will be my second run in with a Captain Earle’s blend, the first being back in March when I smoked Ten Russians alongside Peterson’s Irish Whiskey.

Ten Russians was a doozy of a mixture—bold strength and power, so I was very interested to see what the Honor Blend has in store for me.

From the tin note I pick up the deeper, earthier side of the Virginia continuum. The barnyard hay and the dark, stewed fruit. A slight red wine, vinegar-y note behind it all. 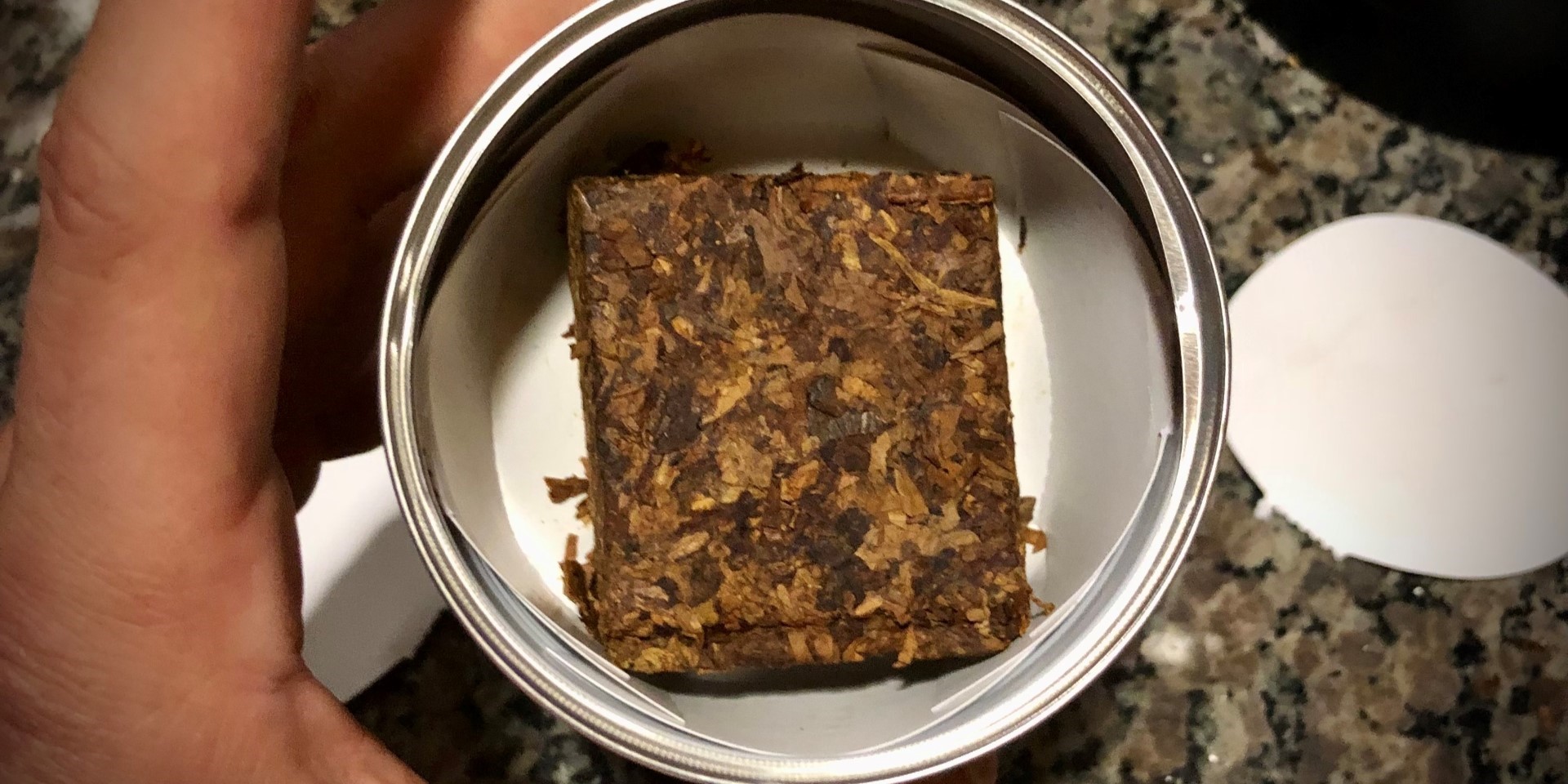 The cake is somewhat dense but easily crumbles away. Only a little moisture, if it needs drying time, it likely won’t need much.

I opt to pack it right away this time around. Going forward, I’m making a point to try blends at varying degrees of dried, namely, drying more than is my inclination to. Last week I got a good deal out of Uno from doing that. I think I may have internalized the cliché “pack looser and dry longer” a bit too deeply and didn’t realize that was an aspect I wasn’t experimenting with much. Each blend will call for something different, so I’m gonna try to navigate that a bit more.

Despite the very distinct Virginia tin note, the first smoke of Honor Blend seemed to live up to the Oriental based categorization. Upon lighting, the spice of peppery Perique is instantly noticeable, but as I acclimate to the profile I get that Oriental herbal quality with bread, wood and spice. 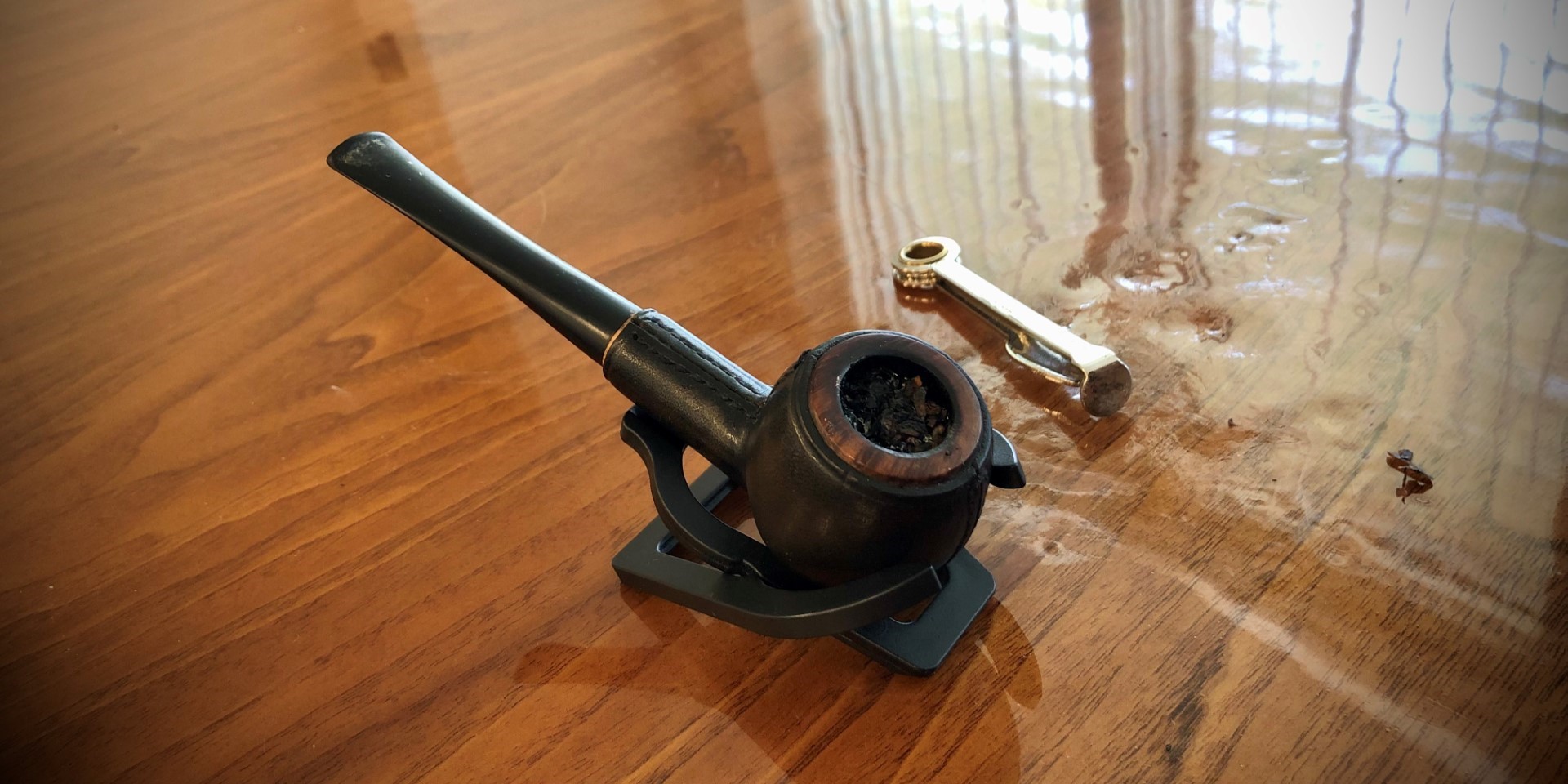 Hay and dark fruit from the Virginia seem to come just behind. Although most of the Virginia I get seems of that low, deeper side of the varietal, there’s some brightness in sweet and citrus notes which seem to ride side-palate. I get a bit more of that Red Virginia raisin and tang when ever so lightly puffed.

In the simplest terms, we have an earthy profile that’s pretty consistent but has the layers to offer some intrigue and nuance.

The earthy tones have depth. I’m not sure that’s the right way to put it (when am I ever?) but I think “earthy” can have a default association to the muted, subtle notes. To me, that’s often the case, but not as a rule. There is a lot of flavor here, even if it isn’t bright and poignant.

Seemed to burn a bit quickly but evenly and didn't threaten to smoke too hot.

I recently got some of Cornell & Diehl’s Izmir Turkish from their Blender Series. The Oriental base in Honor Blend seems very similar. It almost certainly is the same stock, as Cornell & Diehl manufacture Captain Earle's, and head blender Jeremy Reeves has mentioned that the Oriental component they use is a mixture of Izmir and Basma. But I wouldn’t be surprised if this particular blend’s Oriental component is just the Izmir, or ratioed more in that direction.

Honor Blend has an umami savoriness to it, among the earthiness. With the pepper notes and light sweetness, the mixture has a satisfying way of touching a bit of everything palate-wise, even if gently.

As I've continued to smoke this blend, I've noticed more of the Perique's contribution. I got mostly the peppery notes before, and perhaps it was abetting the Virginias in that plummy department. But I seem to notice more of the umami side that Perique can impart. A full, not cloying flavor profile.

I've also noticed the significant mouthfeel from this blend, there's something cool about it, like mint. Not a minty taste, but that cooling affect it has.

Sometimes you want something to explore that doesn’t so neatly fit into our categories, and this is one of those. It’s interesting, not incredibly complex, and well melded and balanced. I struggle to assign the varietals with specific roles other than the obvious ones (I know it’s not Black Cavendish spicing up my nose).

It’s certainly a heavy blend but it still has a genial way that prompts me to forget that. It’s an earthy, tamed spice. It has a mouth feel that's even and not aggressive, not heavy coated. Consistent and uncomplicated, if you don't mind a bit of strength, you can float away with this one. 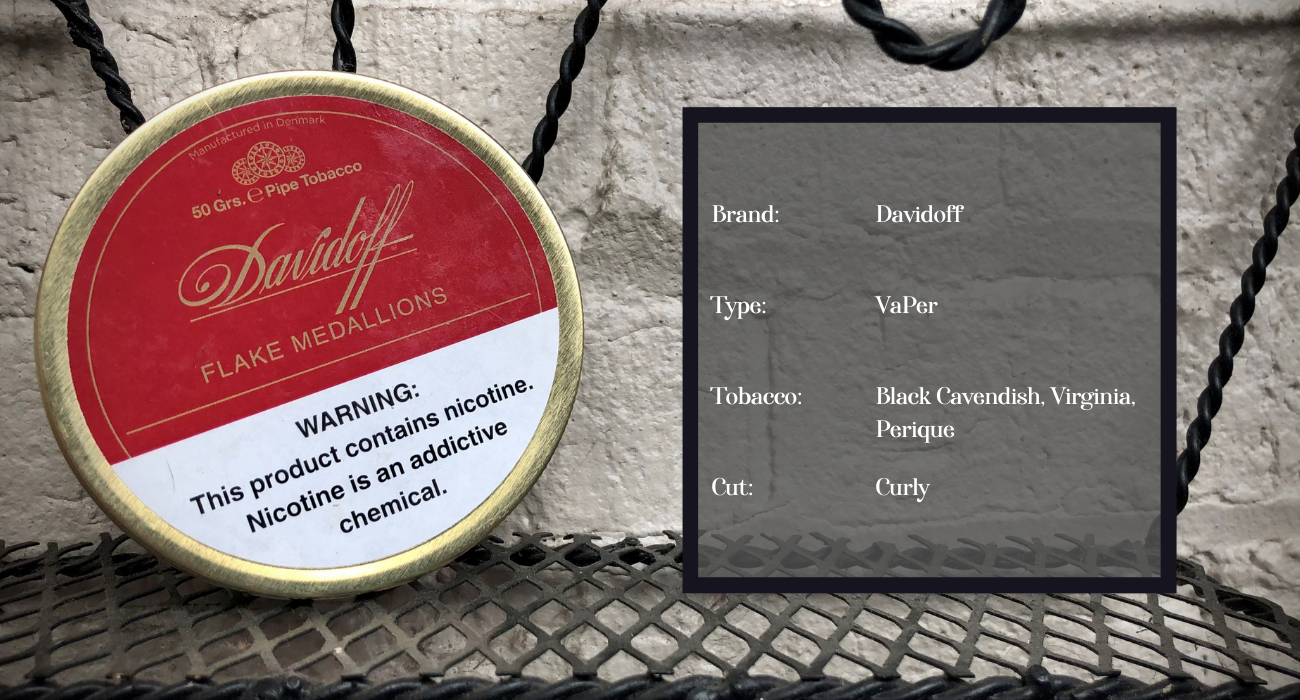 I’m always happy to be packing some VaPer coins into a pipe, and it’s all the more fun when it’s the first foray into a new blend.

In fact this will be my first blend from Zino Davidoff’s (King of Cigars) line of pipe tobacco.

The tin note is very much on the hay and grass side of Virginias. I get a slight sweet note but not so much that plummy, fermented fruit note.

Easily breaks down into long strands, although the bullseye stay relatively intact, so I try to crumble them a little more so that they’re distributed better. 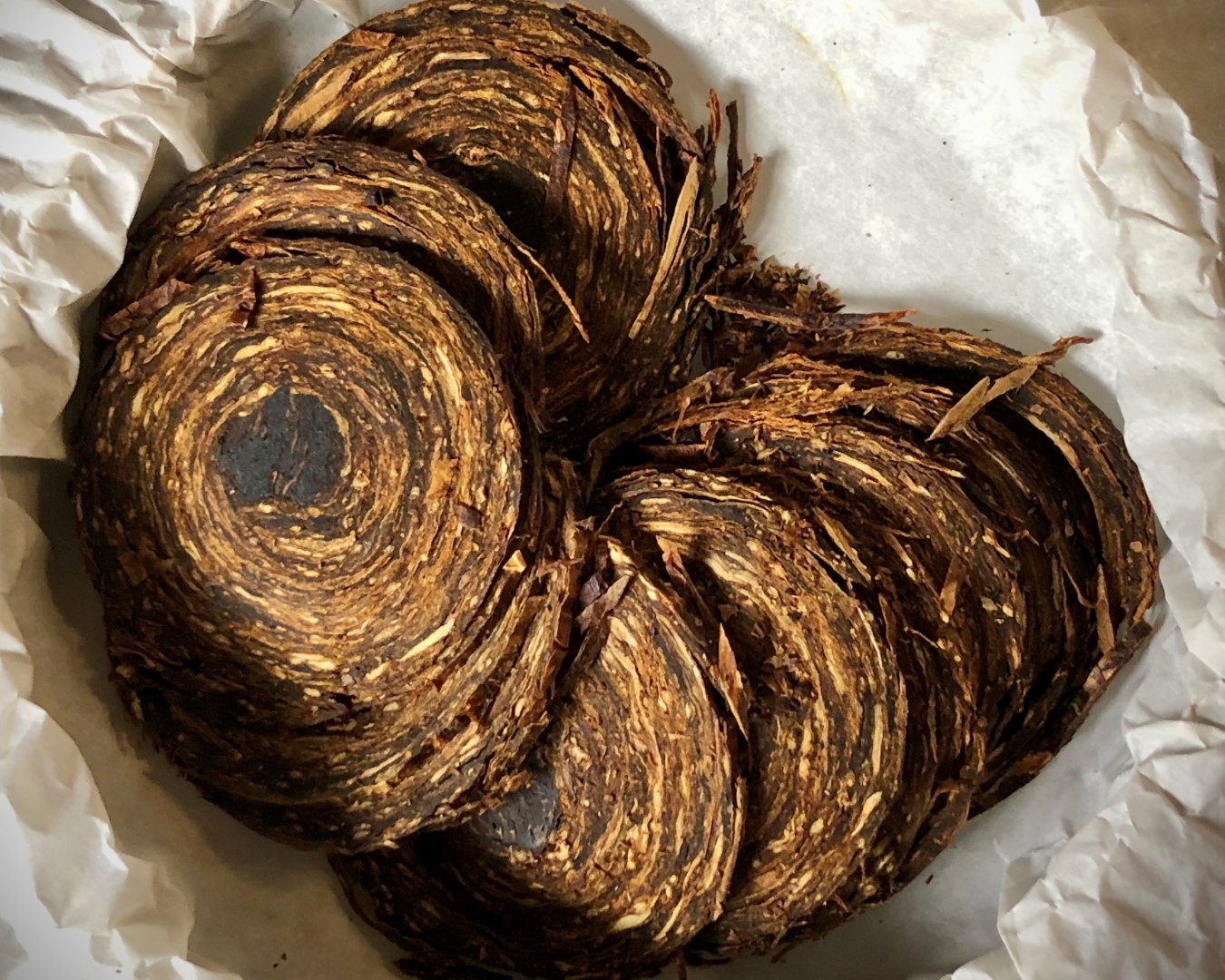 Lately I’ve discovered a love for clay pipes. Of course, I've known they're popular for their neutral smoking properties, but you know, I like clenching. Clays don’t really lend themselves to clenching, so it’s taken me a while to embrace, especially considering I’m often writing/typing while smoking. But my boss threw a few my way recently and I thought, why not give it a go. I've seen the light. They really can deliver a blend with clarity—definitely part of my tasting process now. 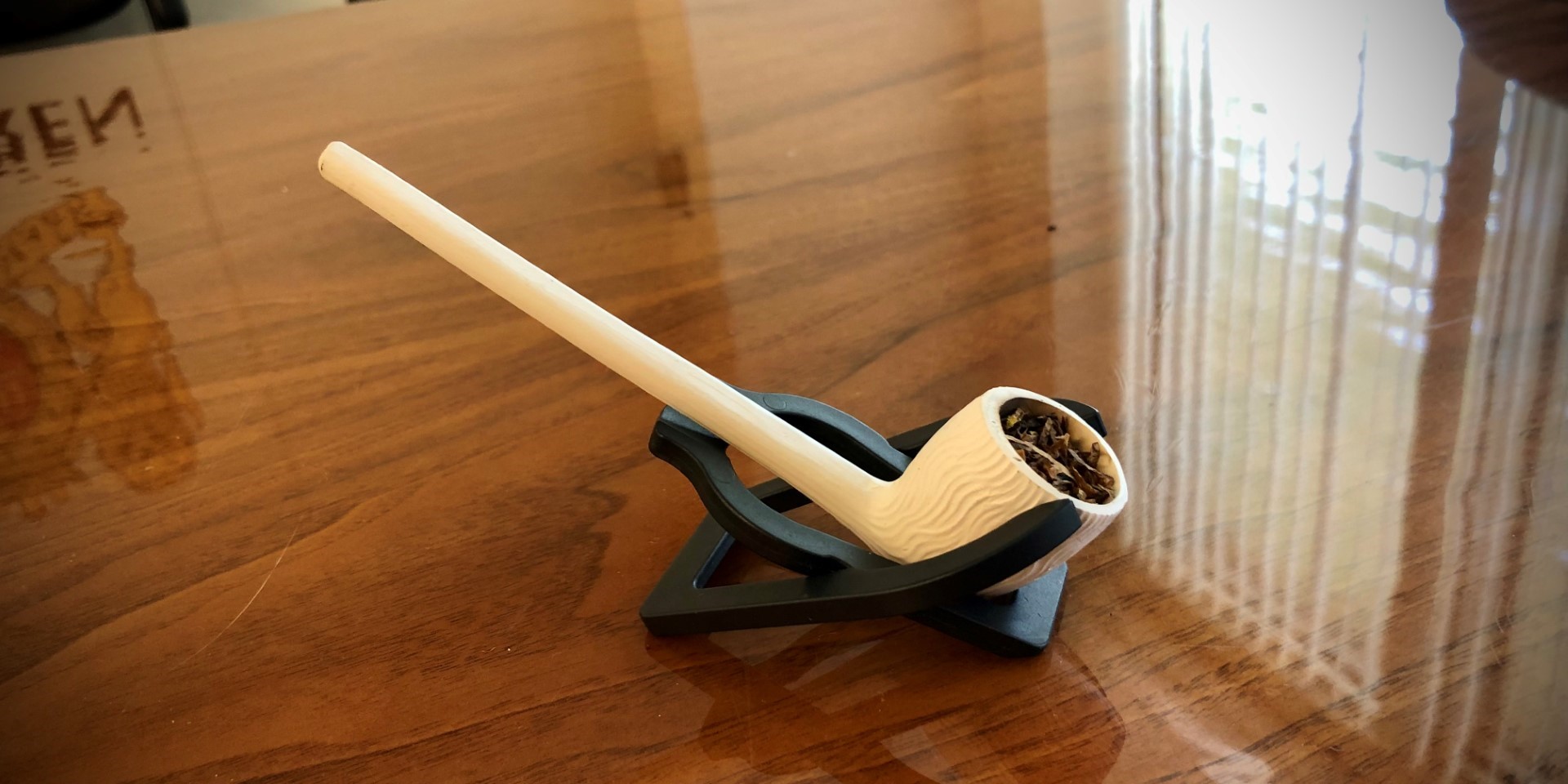 So with my trusty clay, I get to lighting. I immediately get plum and spice from the Perique.

I had some lighting snags at the start that had me puffing a bit too energetically, but as I ease my cadence , tanginess comes into view. Maybe a bit of citrus, but not sharp…more round citrus like an orange if that makes any sense. Is it just me or is orange a “rounder” taste than, say, a lemon. I’m tempted to muse on iconicity in language so I’d better move on now.

I wrote in my notes that it’s a surprisingly full smoke. I don’t think I realized at the time that those bullseyes were Black Cavendish.

There’s significant Perique throughout the smoke but it mellowed some from the initial blossom of spice upon lighting. I get a very pleasing woodiness on the retrohale. Some bright undertones in the base—not forward but noticeable support, making the blend a bit more dynamic.

The actual nicotine hit is mild I’d say, but the spice adds a weight to the blend.

I’m not sure if it’s the match between this blend and this pipe or some other factor but I just had a great smoke with Davidoff Medallion Flakes in my Lorenzetti Avitus. Flavor and body were in perfect balance. I’ve certainly been enjoying this blend but if this smoke is any indication, these coins are up there among my favorites I’ve smoked for Tobacco Files.

There are those elusive smokes that simply get it right, and despite how we try to replicate each variable, we just have to wait for those stars to align again. But I’m thinking (hoping) it’s the pipe. A narrow bowl? For whatever reason, maybe that’s what makes this one sing—for me at least.

I get bready, toasty sweet notes off the bat. Dark fruit and peppery Perique in balance with the tasty Virginias.

I think taste gets a bump from my initial impression.

Trying some unmixed Black Cavendish might actually be homework for me. I feel like I have a sense of the varietal’s role in adding to body and taking on flavors, but I don’t have much of a sense of its own flavor properties. Folks generally talk about its sweetness, which makes sense since it’s often processed from a Virginia source-leaf.

I guess I could just pack some of these bullseyes.

I gave Davidoff Medallion Flakes a try in my Molina Tromba Apple, having a much wider bowl. I imagine there was something about the narrow Avitus that brought out the sweet end of the profile, or perhaps subdued the spice and earth, because that spice and earth was exaggerated in the Tromba. Or perhaps the smaller bowl gives a more even distribution of the Black Cavendish.

I do get a very nice toasty-ness with a subtle sweetness in a wider bowl.

Whatever it might be, I enjoy this blend each time, but definitely have a preference for that dark fruit Virginia coming through.

If you’ve read a few Tobacco Files, you’ll know I don’t comment on the room note very often. To pull a quote from the second column, “tobacco reviews often talk about the room note. To be honest, I don't feel as though I have a good sense of the room note of something that I'm currently smoking. Taste and smell are so intimately coupled that I don't think I can isolate them enough to find the edges of either.”

That hasn't really changed, but sometimes it comes to me.  I jotted down a note of it,

I get a pleasing toasty, mellow scent from the bowl.

So there you have it. Room note.

I'm already taking some time with one of the next columns smokes. No surprise, it's the new Seattle Pipe Club, Hogshead, mentioned at the top of the blog. Since it comes out on the 24th, I was considering getting it in this column, but didn't feel I had the time to really sift through it. Now I'll have more than enough.

Now I should probably decide what the second one is...

As always; feedback, advice, requests, corrections, friendly hellos—gregr@tobaccopipes.com and don't forget we also have some of the best cigars around.